I consider a good local Chinese place as essential as a nearby Tex-Mex place. We have El Gallo on Gessner for Tex-Mex and have been looking for a Chinese restaurant since the demise of Hong Kong Chef in Bellaire.

We think we have one in Canine Inn, err Hunan Inn on I-10 just east of Bunker Hill. There’s nothing earth shattering but good 6.25 lunch specials with some nice big spare ribs as an appetizer.

Any suggestions for Tex-Mex or Chinese in a ten mile or so radius of our Spring Branch/Memorial mansions are welcome.

Yes we’re watching the Astros but on a DTV delay, watch a little, do some stuff, fast forward repeat.

I don’t have the required channel for the 'Stros, but I keep asking Alexa the score. Currently tied at the bottom of the 7th.

Isn’t that Hunan Inn a buffet? I’ve been to it once if so. Next to or near Burger Shack? It was good as I recall. I go to Chang’s on I-10 in the Garden’s at Westgreen exit. And I always get shrimp chow mein and chicken wings. Susie Wong’s moved to Katy from Westheimer by Phonecia long time ago, but driving past last weekend I see it is still (or back) operating on Westheimer. It is ok.

They serve North China items at North China on I-10 @ Hwy 6. You probably remember it was at Memorial City for decades.

I went to North China at least once a week until my place of business moved.

Did they close due to the loss of my dining?

Ironically I looked at their web site this morning due to a severe Chinese craving.

Hunan Inn is not a buffet. It’s in the Marshall’s shopping center on the south side of I-10.

Astros Win! Are there two better young players than Altuve and Correa?

Yippee!! I still don’t like their colors. Good job.

Good to know about Hunan Inn , will definitely check it out. I was thinking of Hunan Chef. It’s the buffet next to Burger Shack. A friend goes there every Monday.

Have you been to the new North China location?

I’d like to add a recommendation for Cafe Ginger, though not necessarily within your zone of stomping grounds, it has some of the best American Chinese I’ve had in a long while. The location on West Gray @ Shepherd is moving in 2018 further east on West Gray. There is a newly opened 2nd location on Post Oak.

Anyway, I love walking in this location with it’s elegant Chinese surroundings, fast service and excellent food. I like the soft shell crab they often have. The menu is large, and much of it is not in the linked site. I don’t know how this large restaurant will relocate within an abandoned Verts Kebab which I thought were all small take out places.

Did you ever settle on a replacement for Hong Kong Chef jc? I happen to realize today the Thai Cottage, which seems to have entrances on Bissonnet and Cedar, west of the new HEB, used to be located in that strip center with HKC. Maybe there’s hope HKC will come back. I’ll keep my eye on those strip centers.

I’m not much of a fan of Americanized Chinese. I’ve been to Shanghai River, which Lambowner has recommended, Ambassador on Richmond, which wasn’t bad but didn’t live up to the hype I’ve seen in online reviews, and years and years and years ago to Auntie Chang’s, on Shepherd and Westheimer, on the second floor in the Randall’s Center on that corner. My fondest memories would be of Auntie Chang’s, but it was a very long time ago (20 years at least).

We only ordered one entrée that I’d been eating since the 80’s and not seen elsewhere, shrimp kew, fried shrimp in a white sauce with snow peas and the standard veggies.

They had decent ribs, good sliced bbq pork, but also the best won ton soup I’ve ever had, a bowl full of wontons, pork slices, and lots of veggies.

No replacement has been found.

Hunan Inn is not a buffet. It’s in the Marshall’s shopping center on the south side of I-10.

I’d forgotten this thread, but went to Hunan Inn a couple of months ago and ordered what is popular, sesame chicken. I took pics, but I didn’t retain them for some reason. It was good, but not great. Great is still Chang’s in Katy or Cafe Ginger on West Gray in my book.

You have been touting that place going back to CH, maybe even before there was a Houston board over there? Others on CH raved about it too but I never got around to going. If it rises from the rubble, I’ll have to make sure I don’t let it slide again.

We go to Canine, I mean Hunan Inn about once a month because it’s so close but we’re open to some place new and Café Ginger looks nice. What do you like?

We’ve also got North China on our radar as we haven’t been there since they left the Memorial area a few years ago and headed west.

They serve Mandarin and Americanized, the Wifeacita likes the sizzling rice soup which a lot of their Asian clientele eat.

I have been to North China since the move, but the food is different than the average American style Chinese, no chow mein here. The sauces are mostly dark, maybe that’s the Mandarin, I don’t know. Cafe Ginger also has sushi, the lunch specials are a bit pricier than most, but they offer some different dishes like salt and pepper soft shell crab.

For sushi, I like the latest Miyako on Washington. It has a really expansive menu and there is really something for everyonee. The downtown Miyako is where I first tasted sushi back in the 90s and it has a special place in my heart.

There was a discussion on Next Door recently about Chinese restaurants in my part of town. Fung’s got only one mention, the same number as P. King Chinese Cuisine in the Phillips station on Hillcroft @ Beechnut. The overwhelming favorite was Happy Lamp on Hillcroft @ S. Braeswood, in the same center with the Russian General Store. I don’t really know the tastes of people in the neighborhood. I was impressed by the number of people who had even heard of Trader Joe’s when the possibility of TJ moving into the vacant HEB space on S. Braeswood came up (that ain’t gonna happen) and I know we don’t have a lot of good eateries in this part of town but I decided to give it a try recently.

The place is a little more run down than the pictures online but it’s not a dump; the man was not very communicative. I asked about the Happy Lamp Beef and all he would say was it was very good. A younger woman right behind him piped up and said it was very, very sweet. 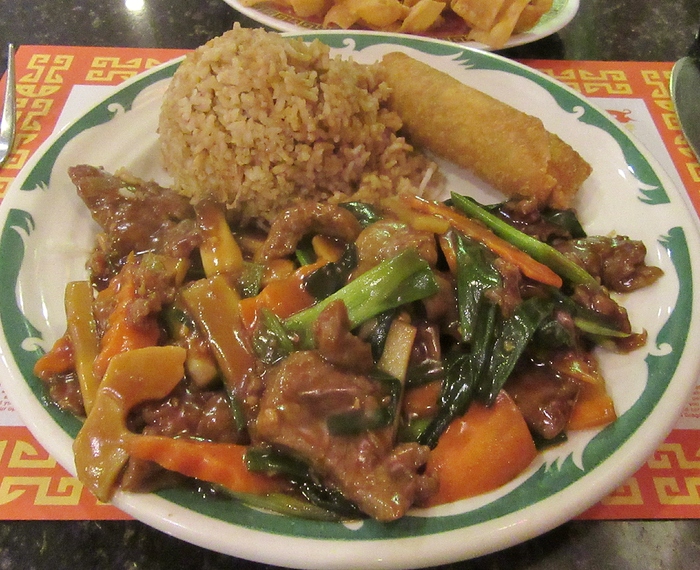 I took a cue from her and ordered the Mongolian Beef. Hey, that entree doesn’t look too bad, eh? Unfortunately it was very tasteless. The fried wonton strips were stale, the rather sad egg roll was not freshly fried, either. The Wonton soup wasn’t bad but this is exactly the sort of experience that has given Americanized Chinese food a bad reputation with me. I don’t think I’ll be going back and I won’t be paying much attention to restaurant discussions on ND.

Thanks for taking one for our tiny team.

Needing something redemptive after that, I stopped in to China House that evening and picked up something to go. The things I’ve had from the Chaozhou menu have been good but the majority of the menu, and probably their business, is Americanized Chinese stuff. 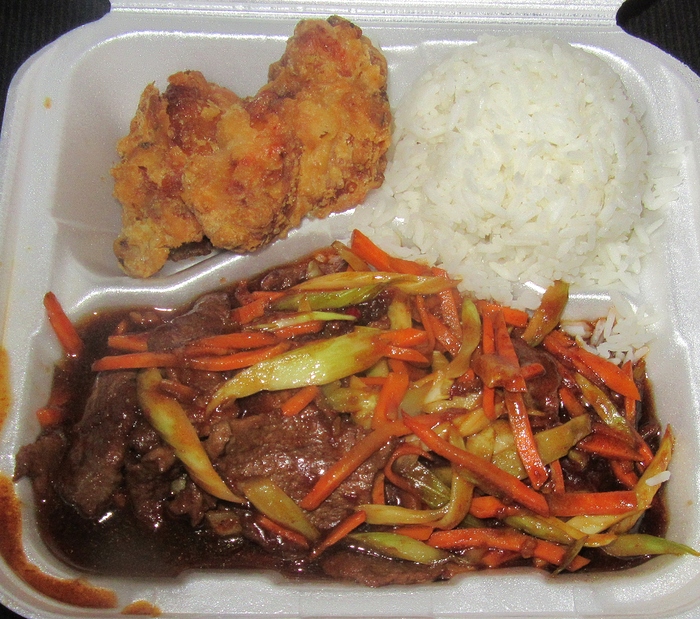 Okay, no points for presentation. I got the Szechuan beef. It was loaded with flavor, beef, carrots and onions in a spicy sauce (I didn’t detect any Szechuan peppercorns). The wings (appetizer) were lacking in seasoning and the fried wonton strips were also stale here. I got the Hot and Sour Soup, which used to be my standard order at Chinese places years ago but lately I’ve always been going for Wonton Soup. Wish I’d gotten it this time, too. Not that the H&S was bad, just that I prefer the wonton now.

Great is still Chang’s in Katy or Cafe Ginger on West Gray in my book.

Cafe Ginger looks very good. I think I’ll be going with my group of friends very soon; a couple of them know about it but like Shanghai River better.

I forgot about Shanghai. They are right, it is very good, expecially the spicy dumplings with peanut sauce which I have to get every time. Cafe Ginger is more upscale and I like their salt and pepper soft shell crab.

Fung’s got only one mention, the same number as P. King Chinese Cuisine in the Phillips station

Hilarious. Well, Fung’s is not American Chinese, but it has my favorite P. King Duck!

They’ve even got a drive-thru window but apparently it isn’t in use. YELP lists another one on Bellaire.

I just haven’t been going out because of this heat. Argh. And summer has barely started

Several of the members of the group I get together with about once a month are of the same persuasion so we decided on a dinner meet-up Cafe Ginger. The dinner menu looked more interesting than the lunch menu, anyway.

I hadn’t eaten much all day so I could take advantage of the opportunity. I ordered the Beijing Duck appetizer - roast duck, scallions and cucumbers in a crepe, with plum sauce. It was prepared table-side, to be specific, right behind my back! The others didn’t realize it was going to wind up in front of me so they didn’t alert me to it. I only caught the last few seconds - he was plating them up when I turned around to see what everybody was staring at. I don’t know if the crepes were cooked there or if he was just assembling the things.

There were two crepes - they looked more like burritos. Thinly sliced duck, long thin slivers of scallion and cucumber with the plum sauce in a bowl on the side. They were not very filling and I loved 'em.

I followed with something I thought wouldn’t be too heavy, Steamed Seafood with Vegetable, from the Diet Treasure section of the menu. Very simple and another winner. I got 4 huge scallops, 5 or 6 jumbo shrimp and about 1/3 C of crab meat, plus asparagus, carrots, zucchini, button mushrooms, broccoli, peppers and bok choy. This came with a small pitcher of soy sauce and a bowl of chile paste/sauce.

I was very pleased and would order both things again — except there’s so much else on the menu that looks good.

No pictures. My friends are not foodies and we have an agreement to turn off our cell phones and enjoy the company of old friends so a camera would not be welcome.

Now. After one visit each to Shanghai River and Cafe Ginger, I will say I definitely prefer Cafe Ginger! Thanks for bringing it up Lambsy.