Would anyone like to share their favorite recipe for hot cross buns? The ones I’ve bought tend to either be too sweet or too dry. Since I’m Jewish, there isn’t a family recipe floating around. Thanks!

Hot cross buns are sweet. But without the sugar in the dough a sugar sub is needed and those are worse. I would go easy on the glaze but leave the dough recipe in tact. The recipe I use for brunch is below. Ali uses a sugar mix of white and brown in the dough and her preference is a heavy glaze but I make the glaze on the side since I prefer them buttered out of the oven without glaze and my family likes glaze. 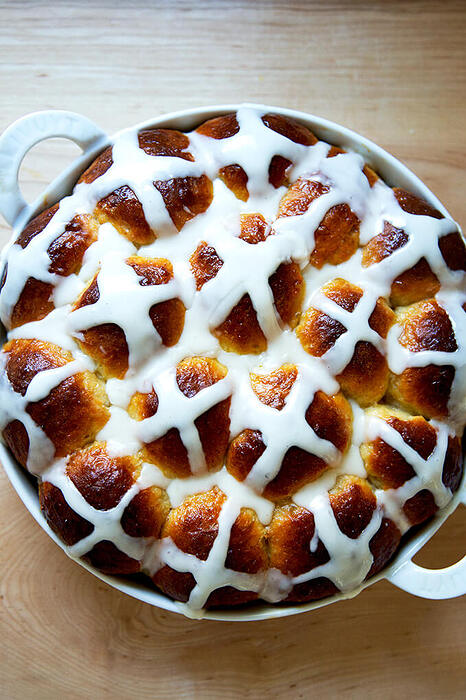 These hot cross buns are so delicious and so easy. Assemble the pan of buns the night before baking; then on Easter morning simply transfer to the oven!

AK does a lot of trial and error recipe tweaking which is why I trust her recipes and instruction.

Thanks - this sounds like a good one. I know HCBs are supposed to be sweet, but some I’ve bought have that amped-up sugary grocery store bakery department taste which I don’t like.

I agree grocer bakeries are not the same. There’s already enough sweetness in each bun. I enjoy them as an alternative to biscuits.

I have never made hot cross buns, but after looking at the recipe from Alexandra’s Kitchen above, I think Alton Brown’s recipe for Parker House Rolls would probably be a good dough to substitute if you want something a bit less sweet. Similar hydration level and enrichment, just less sugar. 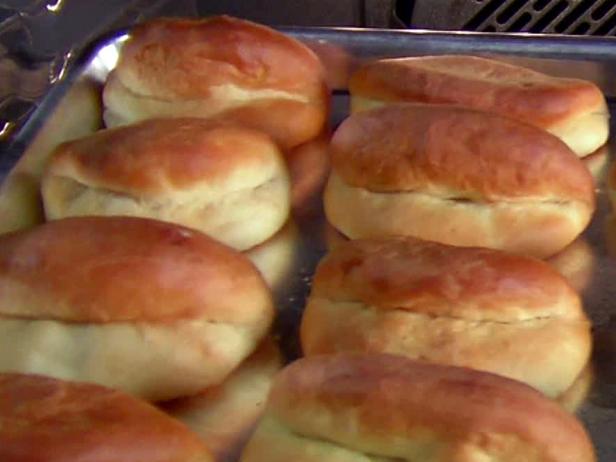 I took a look. I would miss the tender texture some sugar provides. The white/brown sugar suggested in the AK recipe makes a bun not a biscuit roll. No glaze to bypass more sugar is how I go.

This recipe was adapted from Molly Wizenberg’s recipe.

I would miss the tender texture some sugar provides.

The Alton Brown recipe does call for some sugar - 1/3 c. as opposed to Alexandra’s 1/2 c., though I usually reduce that to a scant 1/4 c. when using the dough for dinner rolls. Tenderness typically comes from enrichment (fat/dairy) anyway, not so much from sugar - and the AB recipe is very tender, like an extra-soft brioche. The two recipes are otherwise nearly identical except that Alexandra’s calls for a whole egg instead of two yolks. As I said I have never made HCB so I don’t really know how sweet they are supposed to be, but for my taste the AB recipe plus glaze would be plenty sweet.

I don’t like the flavour of them so have never made. But, if I was going to, I’d use this recipe. I’ve been cooking Delia Smith’s recipes since the 1980s and I reckon I can count on one hand the number of times a recipe hasnt worked for me. 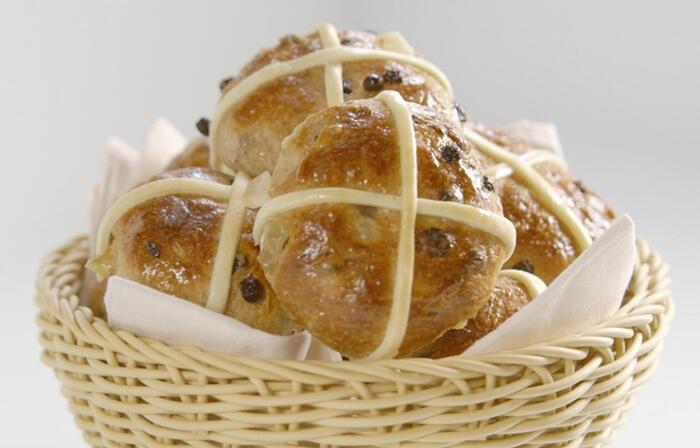 Hot Cross Buns cannot be dashed off quickly but watching the dough rise is all very satisfying, and then your family can enjoy all that fruity, spicy stickiness. You can now watch how to make Hot Cross Buns in our Cookery School video below.

They are one of the things that have almost lost their seasonality in the UK. Almost as soon as the Christmas foods are cleared from supermarket shelves, hot cross buns and chocolate Easter eggs replace them. Which is a shame as the bun has some considerable history behind it - maybe back to 1361, according to Wikipedia.

I dislike glaze. It’s good to have choices. Hope the OP finds a recipe to their liking.

Agreed - I’m not a glaze fan either. Probably why I never make or eat HCB!

Cobs bakery, a chain in Canada, also bakes hot cross buns made with chocolate chips instead of the mixed spice and candied/dried fruit.

I’ve been happy with all the Felicity Cloake recipes I’ve tried over the last year. I haven’t made these, but this is where I would start.
https://www.google.com/amp/s/amp.theguardian.com/lifeandstyle/wordofmouth/2011/apr/21/cook-perfect-hot-cross-buns

Cobs bakery, a chain in Canada, also bakes hot cross buns made with chocolate chips instead of the mixed spice and candied/dried fruit.

i.e. to me those aren’t hot cross buns at all, though they’re good.

If the chocolate chip hot cross buns are a bun with a cross, and sold around Good Friday, close enough in my books. I mentioned them, because a fair number of people mentioned they don’t like traditional Hot Cross Buns.

I seem to remember seeing a recipe for a dried apricot Hot Cross Bun last year.

If candied fruit /citron/ raisins / cloves wreck a pastry for some people, I’m okay with non-traditional versions being offered!

If candied fruit /citron/ raisins / cloves wreck a pastry for some people, I’m okay with non-traditional versions being offered!

Me too, for sure - it’s no good eating a special treat you don’t even like! (To me that just means if you don’t like hot cross buns, have something you do like instead.)

I made a batch to rest overnight. No raisins, no plans to glaze on top. Bake off in the AM. I used 1/4 cup coconut sugar and 1/4 cup light brown sugar in the dough for 16 bun batch.

But what if you want a bun that has a cross on it to celebrate Good Friday and Easter?

Are you okay with calling it a Chocolate Cross Bun?

Are you okay with chocolate- dipped Easter bread?

You’re right, there is no pedantically proper solution to this kind of situation. My opinion is that a long-established well-known recipe ought to be allowed to “own” its name, and substantial variations are an excellent idea but should be called a different name. I know that that idea has several flaws and won’t necessarily work, but I can wish.

Oh, the other question: Make anything! I love it! Just don’t call all of them the same name.

Ok my Aunt nabbed the plate before I had a chance to take a photo. I did puree figs to spread on the split buns but neglected to mention that was in the cooler. 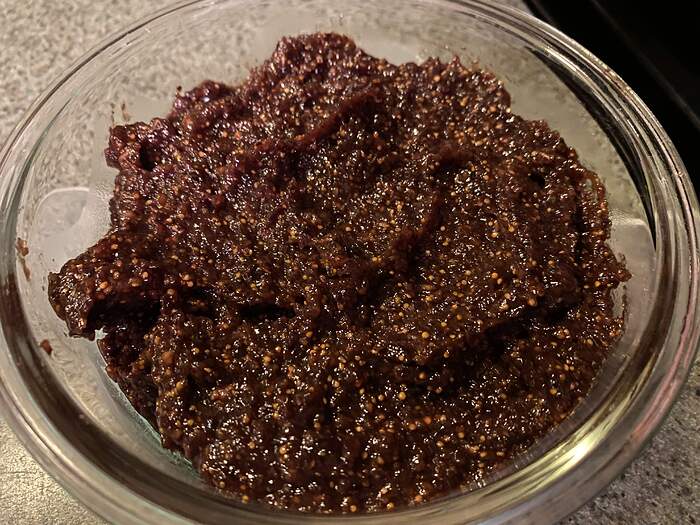 I didn’t get to taste the buns but the recipe was easy I will run another batch soon. They browned nicely.

If you want something both traditional and celebratory, go for Polish chocolate babka. It crosses both Jewish and Christian cultures, especially at Easter. Fabulous eating and looking.