sck - Honolulu Café opens its first Singapore branch in two weeks’ time! Honolulu Café boss, Derrick Yeung (whose father opened the first Honolulu Café in Sham Sui Po back in the 1940s) was in town and interviewed by local media. The new Honolulu Café outlet will be in Centrepoint Orchard, where a branch of another HK stalwart, Mak’s Noodles, is located.

Hopefully the standards hold up.

Does the quality of Mak’s noodle make it to Singapore?

Yes, they did quite a good job for the Singapore outlet - I’ll post on that on HO soon.

Excelsior gets Lord Stow deliveries from Macau multiple times a day starting at 7am, I was told. $10.5 a tart. Volume discount. Yum. I asked for the ones with more caramelization. Although its a bit apples to oranges, I prefer these to Honolulu or Tai Cheong (too yellow, food coloring?) for its flaky shell and caramelization. 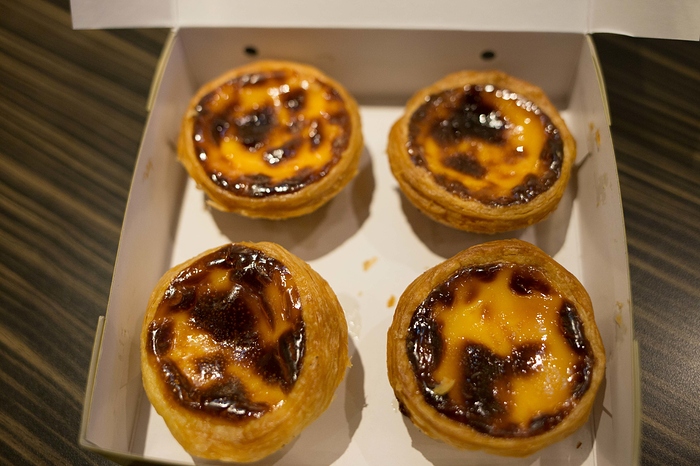 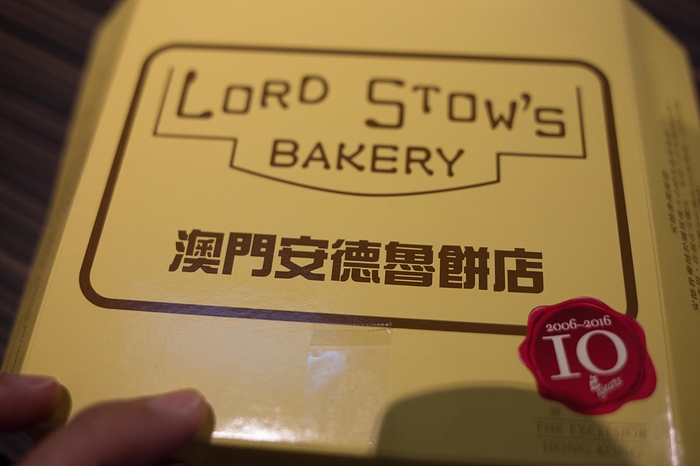 Tai Cheong, Peak version, which is similar to their Central location’s version. Note the colour of the custard. The ones at the Peak cost $1 more. I think its $9. 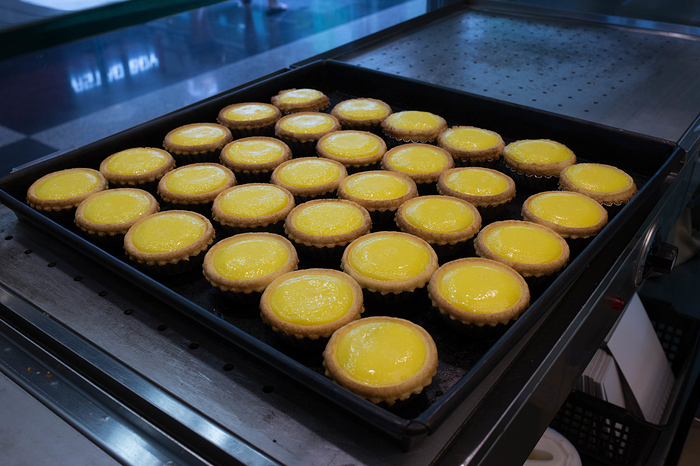 I have eaten egg tarts from 4 different bakery on this trip, in Hong Kong and Malaysia.

Several occasion this trip from Honolulu’s in Wan Chai, Hong Kong, which I forgot to take any photos. To me they are still my favourites and my point of references for comparison. Most of the time, when I bought them, they are still warm. They have a nice balance of good consistance of custard and a light flaky base. If I remember correctly, $8HKD / tart.

We bought this from Ming Xiang Tai in George Town, Malaysia. I don’t know if they have a good reputation or not, but since outside the shop, they have a big signage of a photo of tart, it seems they are pretty proud of it. Indeed it tasted good, it has a nice flaky pastry. The only problem for me, I found there are crust is way too thick in relationship of the custard. RM 2.2 a piece 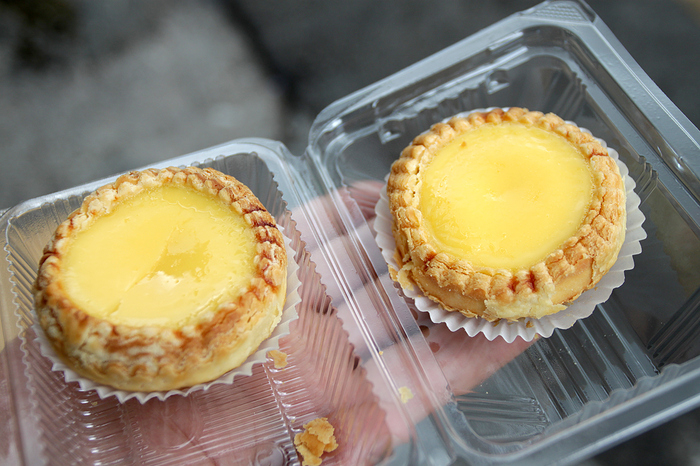 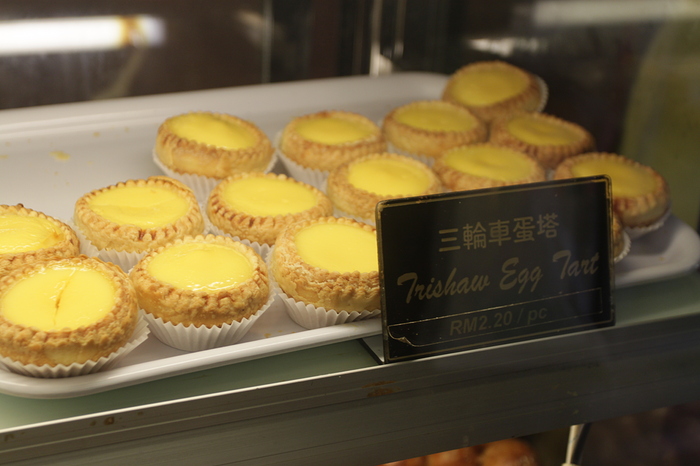 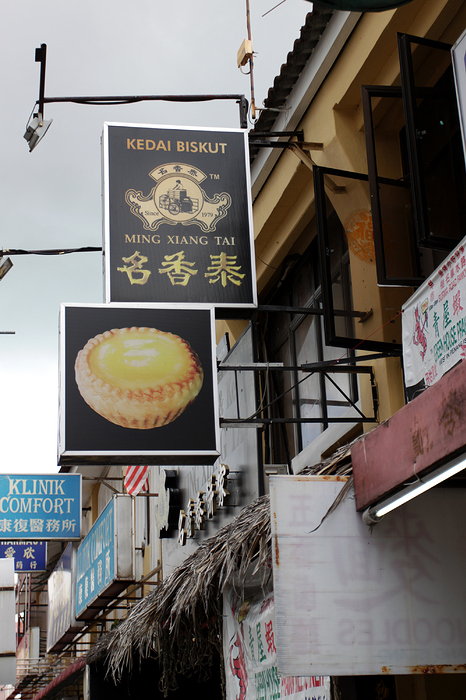 While walking in Jordan in Hong Kong, I felt really hungry and I bought an egg tart from a local bakery called Bakery King. The colour looks very yellow, so I wasn’t expecting much. In fact, it is quite good. For the crust, it’s a bit heavier, but acceptable and nearly as good as Honolulu, I will be happy to eat this everyday especially the price is only $4 HKD, half the price of Honolulu. 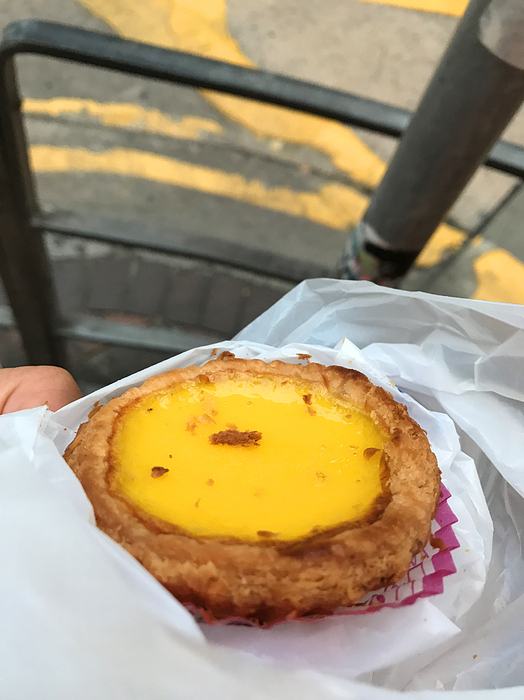 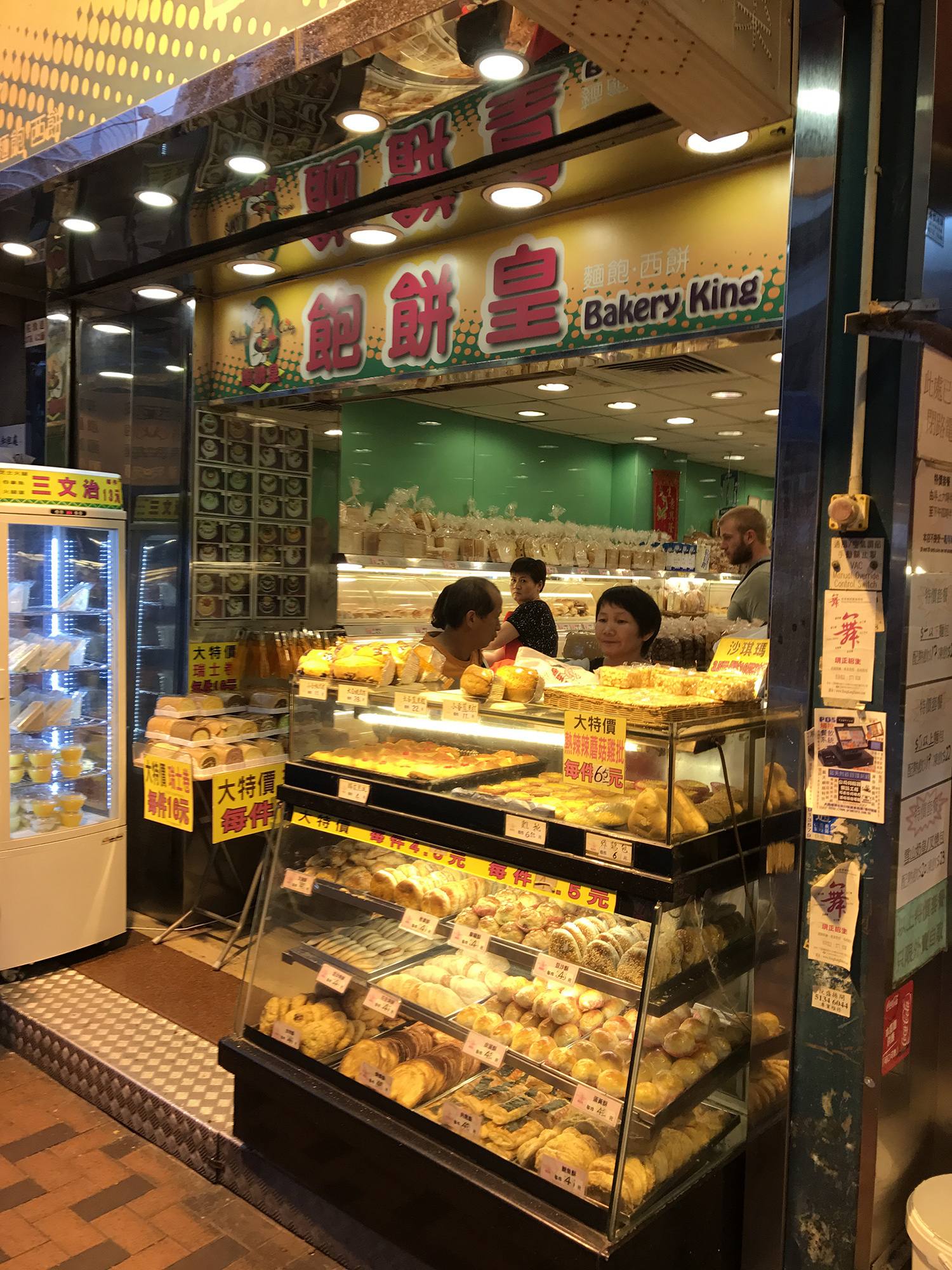 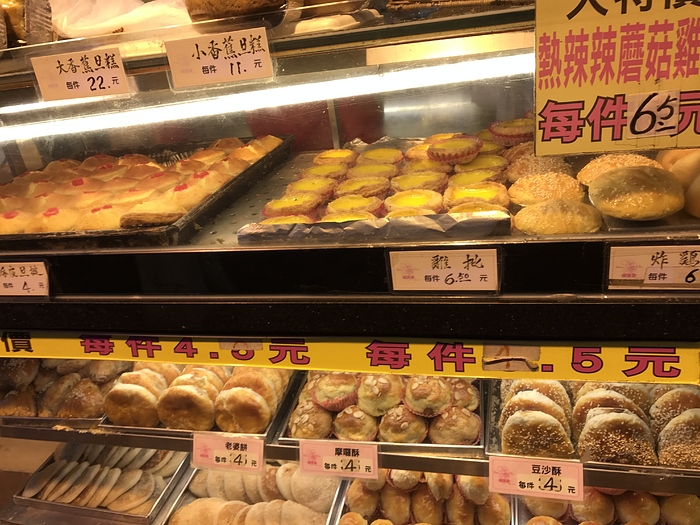 I have also tried the famous Macau Lord Stow’s tart from Excelsior Hotel after our dim sum lunch. Compared to the Chinese egg tart, this Macau version of custard tart is slightly sweeter and more buttery but still a Chinese version. I didn’t find the shell more flaky compared to the Chinese ones as klyeoh has reported earlier, I think his was fresh from oven. The Pastel de nata I have tasted in France is much more sweet and has a strong taste of cinnamon.

Strange, I bought 4 for $40HKD, cheaper than @sck. I nearly forgot to take the photo… 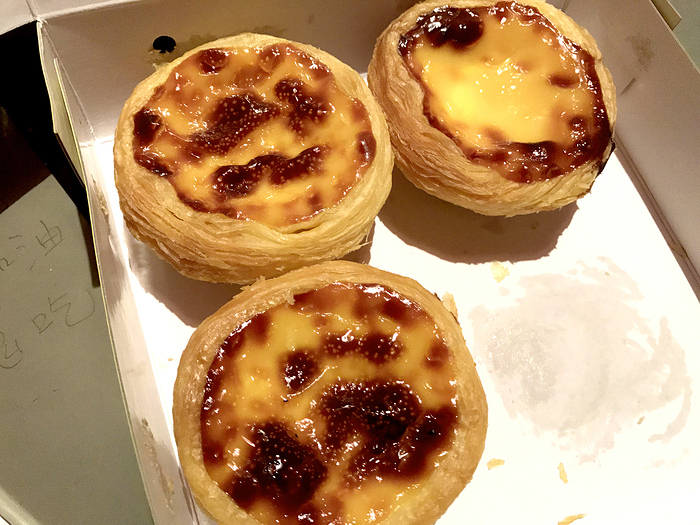 The last egg tart before heading back to France, got it from Tai Cheong. I like it, it’s well done. The shell is of cookie pastry but much lightly than for example a French tart. It is presented in a small aluminium tray with a hole pierced. I think price is $6.5HKD 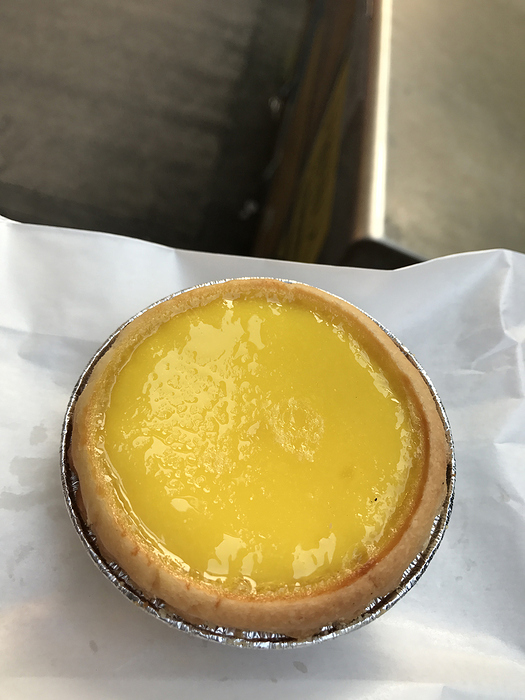 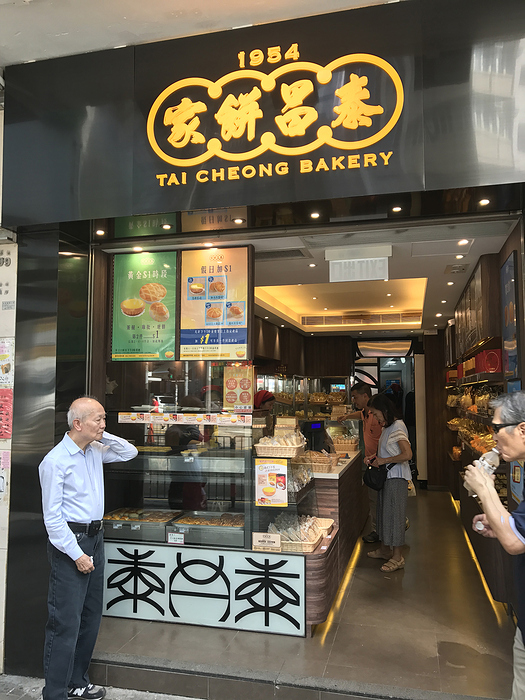 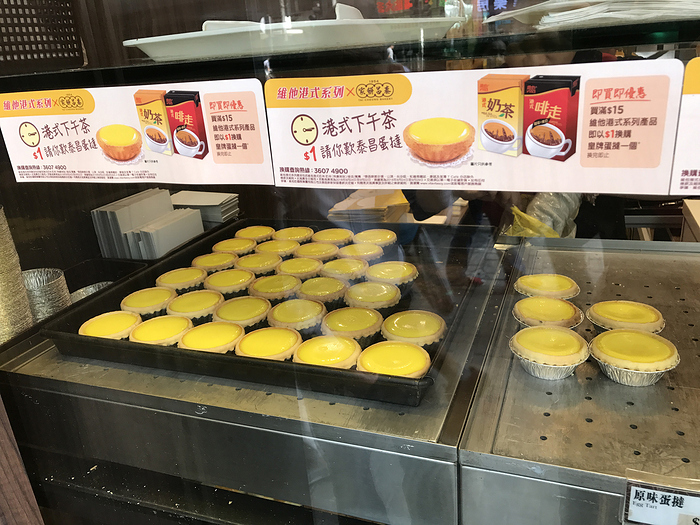 I can understand why some people doesn’t like the Chinese dan tat, it’s less rich (not very sweet) and much more airy in the pastry (normally they use lard and not butter).

Personally, I like both, you can even find Chinese egg tarts part of a dim sum meal.

@sck I don’t know if the custard is more yellow, it’s because of colouring, I don’t think it’s 100% the case. Since I do some pastry at home, you can achieve a more yellow custard if the colour of the egg yolk is more intense. I think the tart I got from Bakery King, there is colouring in it.

@sck I don’t know if the custard is more yellow, it’s because of colouring, I don’t think it’s 100% the case. Since I do some pastry at home, you can achieve a more yellow custard if the colour of the egg yolk is more intense. I think the tart I got from Bakery King, there is colouring in it.

Indeed. Usually you have to have good eggs in order for the yolk to naturally be very yellow. The color comes from poking around and eating e.g. bugs outside. Factory farmed eggs usually look rather pale.

Oh, just realized I never posted this link here (its on FTC).

A very cool infographic made by people bravely sacrificing their arteries.

Someone showed it to me in the past, some egg tart fanatic! Quite fun overall! 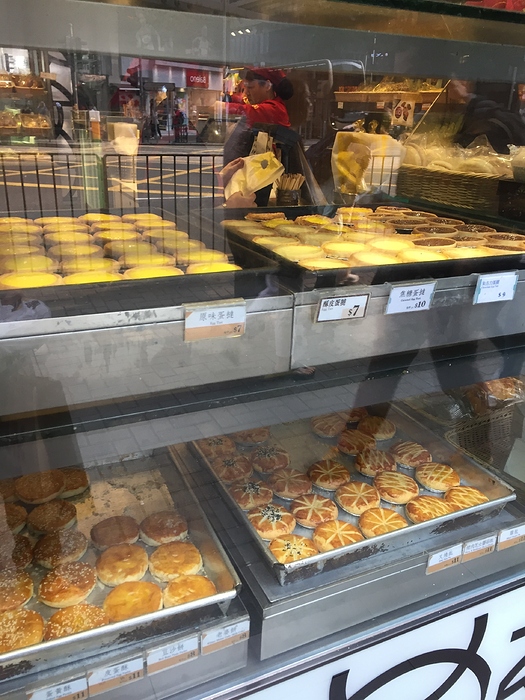 Interestingly Tai Cheong is now at $7 for an egg tart and Honolulu nearby in Wanchai is charging $9 each.

I saw some egg white tart (next to the original in the picture), didn’t try.

Tai Cheong is now at $7 for an egg tart and Honolulu nearby in Wanchai is charging $9 each.

Ha, I just stopped by Tai Cheong and Honolulu bakery on our brief stop in Hong Kong. I personally prefer the pastry crust over the cookie so I enjoyed Honolulu’s more (but dear god, I forgotten how bad some of the bathrooms can be…)