Can you swing by and get me on your way north?!

Come on over - this will be the “appetizer” (i.e. grazing-non-stop-before-the-main-meal) course for thanksgiving, because the “experimental” first round passed muster tonight with the parental authorities in charge

I was gonna suggest orange zest with the coriander!

I cure salmon often and have tried many different flavouring combos. Still like scotch-dill-juniper berries* combo the most. (*pulverise dried berries in a FP) 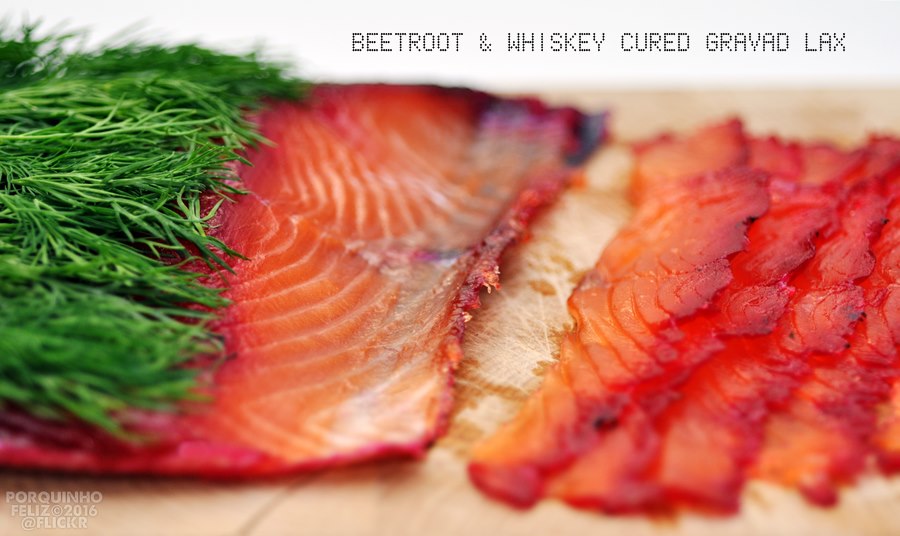 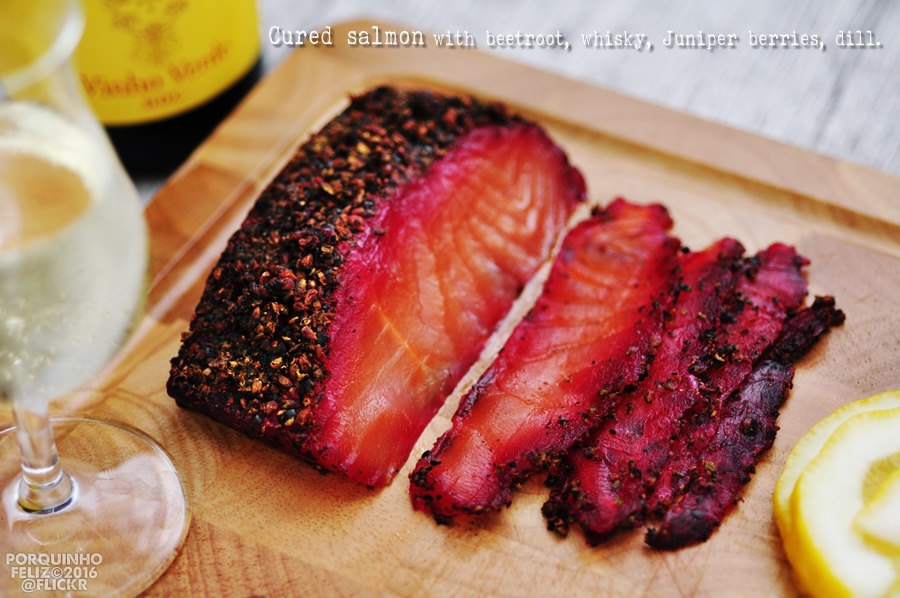 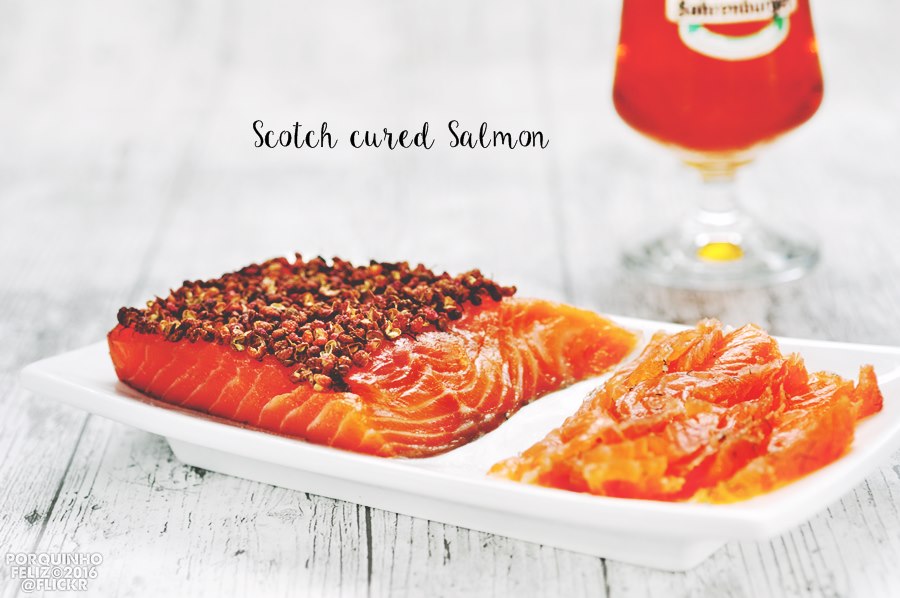 The slices are briefly submerged in beetroot liquid (obtained after boiling). 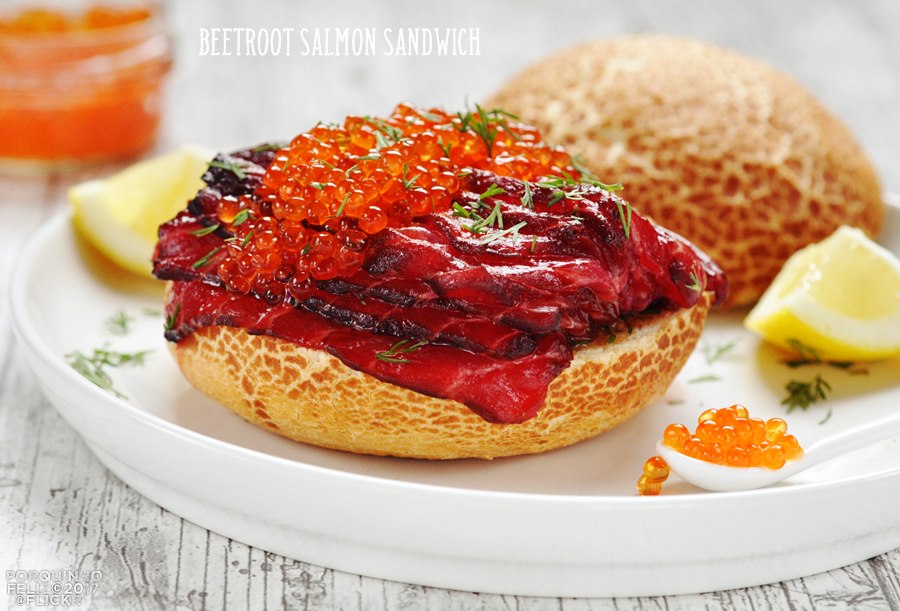 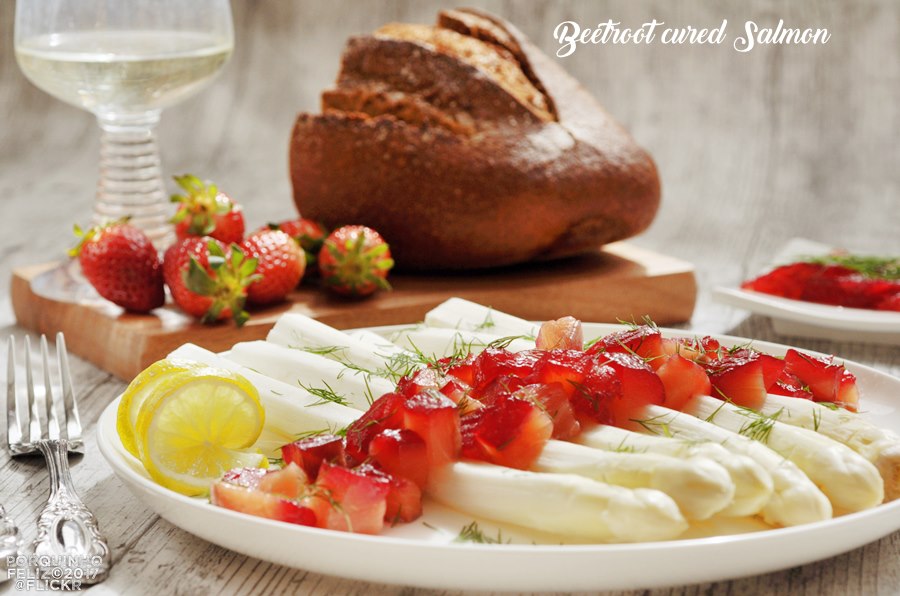 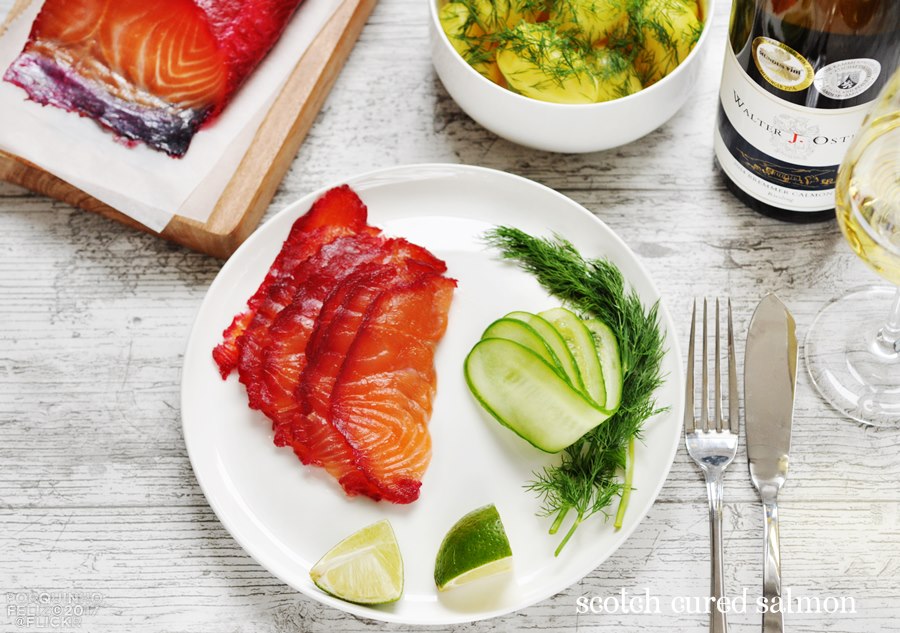 Also try curing your own duck or goose breast. It’s just as crazy easy. Never buy again. I have a duck breast ready to be hung tonight. (photo is from last year) 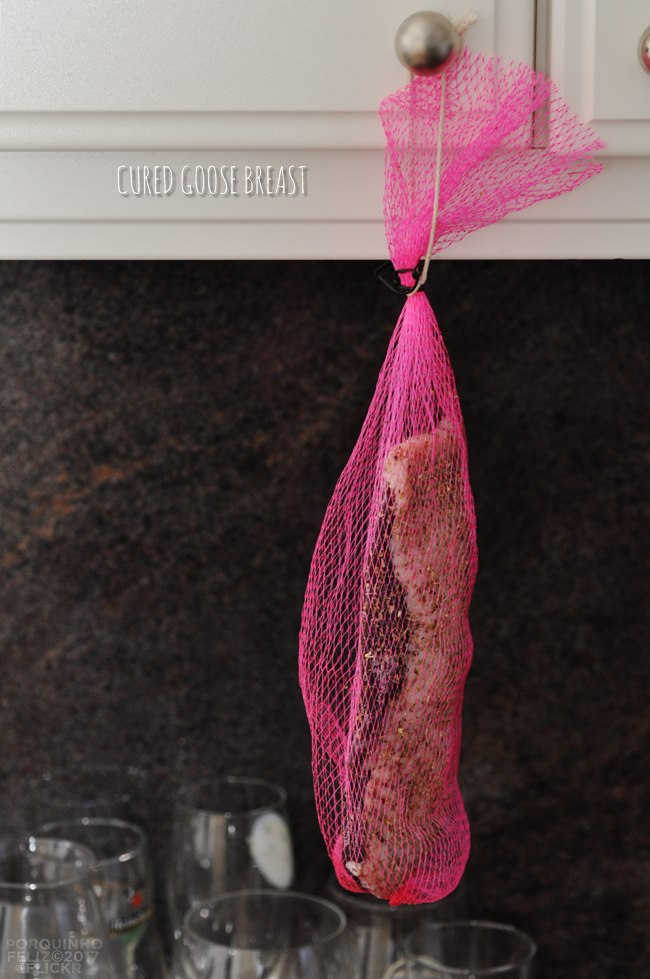 I use most of the same ingredients. When it goes into the fridge skin side down I weight it down. additionally I usually place it in a couple of plastic bags (similar to those for veggies at the market) tied tight, so as not allow the brine to leak out during the process. I have found that you cannot get the plastic wrap to contain the liquid brine 100% .

A picture please when you do the reveal!

Lovely! I was going to add beets for color, but forgot to pick up some!

I’ve done it with beets as well. Striking color. Makes for an interesting presentation.

I forgot to take a pic before I cleaned off the cured salmon. It was too salty when I tried it, so it soaked in water for an hour and then it was fine.

I liked the flavor better this time - the citrus was discernible, but I couldn’t detect the thyme.

Served with creme fraiche with chives and pickled pearl onions. I didn’t love the onion combination.

As I was thinking about the pros and cons of making this at home, it struck me that the price probably works out to about the same to buy wild smoked salmon at TJ or Costco. It sure was fun to experiment with something new, though! 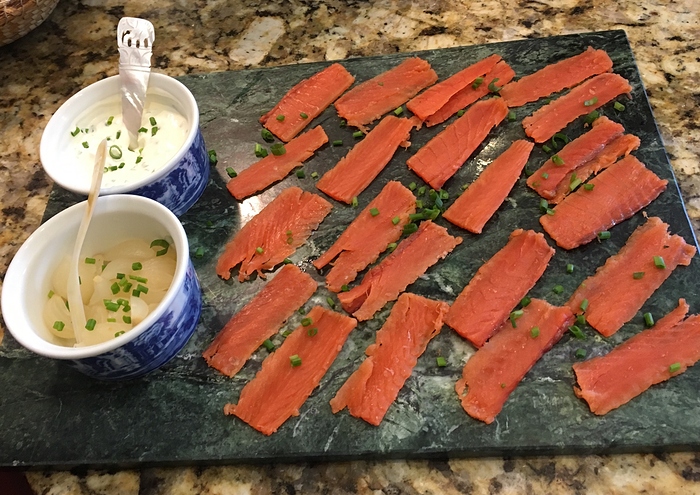 I started curing my own gravlax years ago because I just don’t like how sugary the commercial versions tend to be. I used just salt and peppercorns, wrapping the salted fish tightly in plastic wrap and setting it in the fridge for a few days. I haven’t done it in quite a while, and I found a Trader Joe’s house brand of smoked salmon that doesn’t have sugar.

I have done a pickled onion, such as Dominican style cured in salt and sugar and a touch of vinegar, but also a touch of sour cream. So have never used pearl onions.
insofar as sugar, I use 1 salt to 2 sugar, coriander, some bayleaf, a splash of vodka and a few sprigs of dill.
And yes, I wash the fish after I un-wrap it as well.
Saregama, looks like you did a nice job slicing, as your slices are all uniform.

Thanks for noticing… the precursor was trying every knife available, mangling some of the fish, then deciding to locate the sharpener, sharpening every single knife, and half an hour later going back to slicing

Even if the cost is the same I still prefer to make my own. Check the packaging to see a list of all the stuff they put in the product.

To slice very thinly I use my long (and thin) knives. They are the 2 on far left. The longest one is actually a jamón carving knife. Works great for slicing cured meats and fish. 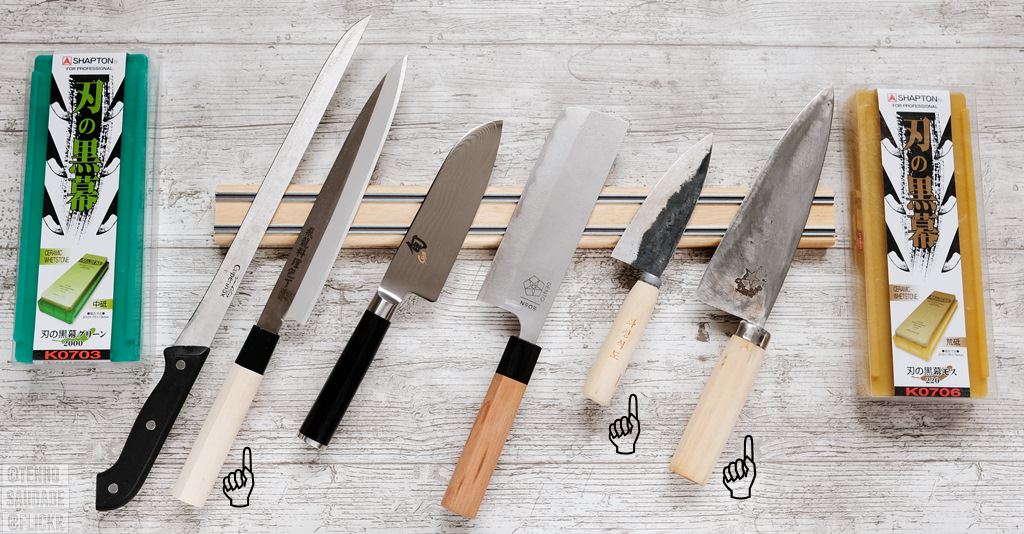 Stopped at Aldi today and picked up 2 sides of salmon. Skinned and portioned giving several good meal options. The belly is curing now and will go on the smoker. The 2 tail sections are in a brn sugar salt mixture with the crushed corriander (a repeat from the last one) it was really good. Sprinkled bourbon for a little different flavor profile

Nice knives. The knife selection available to me was pretty good, just needed sharpening. We did discuss how a flexible filleting knife would have been optimal.

I’ll add in case others venture this way - I watched a Martha stewart video that taught me an easier method (I was trying to slice the way it’s done professionally - I mean Zabar’s - perpendicular to the length, for long, triangular slices, but you do need a long, sharp, flexible blade for that).

MS cut the side into about 3” fillets, and sliced them the short way for blini or other hors d’oeuvres - this was much easier, and also helped portioning (family - incl me - is good at walking by and popping a few pieces into the mouth on their way to another app

About $3 less per pound

Back at it! Found a nicely shaped piece of salmon at the store and decided to try a “wet” cure using a fennel and onion paste.

Used Atlantic salmon this time for a more unctuous outcome than the previous iterations with wild Alaskan salmon.

As an aside - marinated fennel after its sat for a while has a cucumber-ish flavor to me - noticed it in leftover fennel fattoush a while ago, and reiterated now. (I should say that I dislike cucumber, which is why the change in fennel stands out.)

The recipe has a 3 day wet cure, followed by a 1 day rest after rinsing and rewrapping the salmon. I sneaked a few slices before rewrapping of course!
. 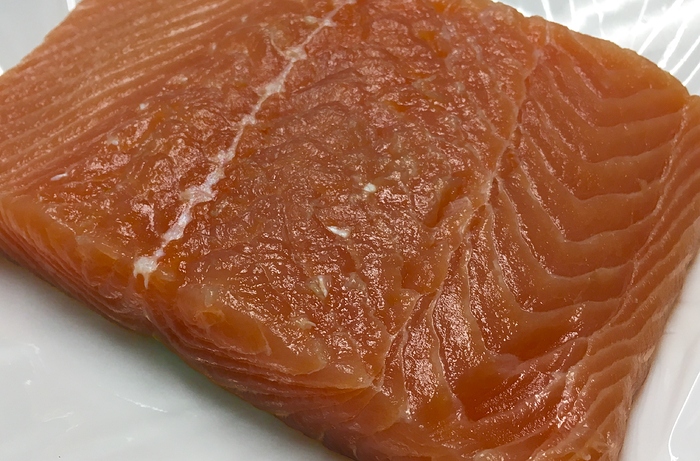 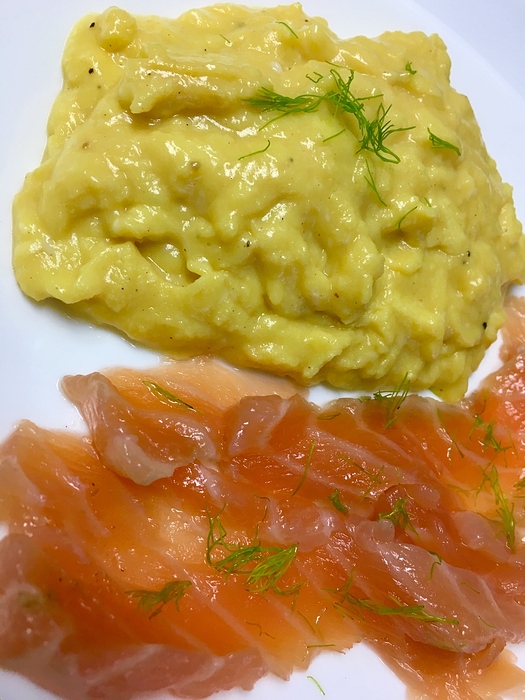 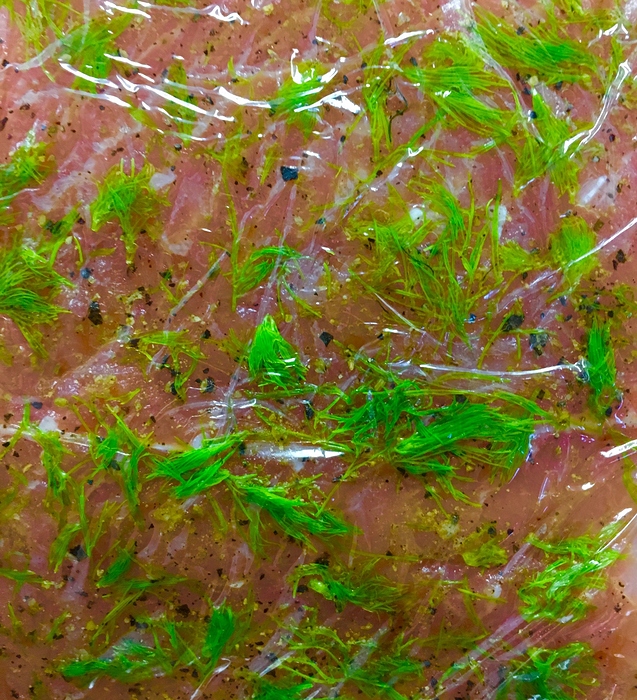