Helping out soon-to-be-parents with some meals and snacks!

I got some ideas from @biondanonima 's thread here : Meals for new parents? but I thought I’d start a new thread since I’ve got some slightly different parameters.

One of my family members is about to give birth, and we are all so excited! I was going to just go to our local gourmet supermarket and buy a few bags of prepared food but I’ve finally got some free time the next couple weekends so I’m thinking of making some stuff for mom and dad-to-be.

I’m looking for things that fall into certain categories. Mom-to-be is and always has been a picky eater with some texture and flavor aversions. She loves pasta and basically any carbs, chicken (breasts and boneless only), and will eat beef in some forms. No fish, no pork except bacon, and certain random things will not appeal to her. Most veggies are ok. Dad-to-be is a meat and potatoes guy but will eat absolutely anything, so therefore I’ll be cooking more for her tastes. He made an enormous stock pot of tomato sauce so I will be staying away from anything in that vein (usually baked ziti would be my go-to). I am also looking for items that are easily snackable and grabbable, and finally I really do not want to spend a ton of time on fussy preparations, and given her preferences anything that takes that long to make she probably won’t like anyway!

Here’s what I was thinking so far:
-Smitten Kitchen mushroom marsala pasta bake (I’ve made this for her before and she liked it so I figure this is pretty safe) OR Ina pesto pasta salad (I feel like this may be better because it doesn’t need to be heated)
-Ina veggie frittata- thinking of making these as mini muffins as suggested in the other thread
-Smitten breakfast apple granola crisp OR pear and almond oven oatmeal
-Tater tot chicken chicken pot hot dish- seems like the kind of comfort food meal I’d like if I were them (http://mynameisyeh.com/mynameisyeh/2015/4/tater-tot-chicken-pot-hotdish)
-Ina buttermilk cheddar biscuits (a favorite of hers)
-Melissa Clark marmalade meatballs- I just found this recipe and it says “picky adults will go nuts for them”- and they seem poppable
-Mini muffin of some sort that’s semi-healthy? Maybe zucchini?

Does anyone else have any ideas? Any moms and dads out there care to share their favorite meal or snack someone brought to them when they brought home their little one?

I am of absolutely no help here. Something that can be eaten by the mom with one hand, either holding the food with the hand or holding the utensil with the food nearby that’s not going to drip all over the baby? If its the first child, unless they have lots of help, she may not have much time to sit at the table and eat.

LOL I was the father and even I was bone tired for the first few weeks. To be honest I don’t remember anything I ate. I was just grateful that there’s food in the fridge that I could eat before I fell asleep.

Haha!! Your response is actually really helpful! Basically I see that I am overthinking this and should just go ahead with whatever I think they will like because they will not even remember what it is, just that it was in the fridge and that they didn’t have to make it!

Your hand-held and non messy comment is helpful as well so as much as I want to make pasta I’m not sure that’s the best option. My other ideas seem more easy to eat. I’ll have to look for a pasta/grain recipe that is somehow portable/handheld. Thanks!

We were grateful for any foods brought to us,
and in many cases scarfed foods down without even tasting them :-). For that reason. we especially appreciated salads, lighter foods, pre-cut/washed/peeled fruit, and flat ziploc bags of soups.

It looks like all your suggestions are considerate—- foods that require lots of utensils, dishes, and cleanup can add stress.

One of our favorite meals was frozen tamales and a jar of salsa ! Quick to microwave, no advanced planning/defrosting, only a plate and fork and to wash afterwards.

Things that will taste good and will retain the correct consistency when eaten hot, cold or room temp

Egg, sausage/bacon, and cheese wrapped in a tortilla freezes well and is ready 60-90 seconds in the microwave

My best friend has a 3month old baby and was over the moon excited about the date based oat and nut balls i made for her. They’re basically like larabars but as a ball and i froze them on a tray til solid, then transferred to an airtight container. They keep well frozen or in the freezer.

I made a few variations, one using dried apricots as the base, and a few with the dates and changed up the flavor- one had shredded coconut, one used almond butter, one had mini choco chips.

She loved them because when she was up in the middle of the night with the baby she would be starving hungry and was able to eat a few and go right back to sleep with zero prep of any kind and they’re really satisfying.
I followed this recipe as a template for measurements and technique, i used regular oats since she isn’t gluten free. Oh, and ignore the recipe’s dumb suggestion to roll in cocoa powder! Can you imagine how messy that would be to try and eat?? 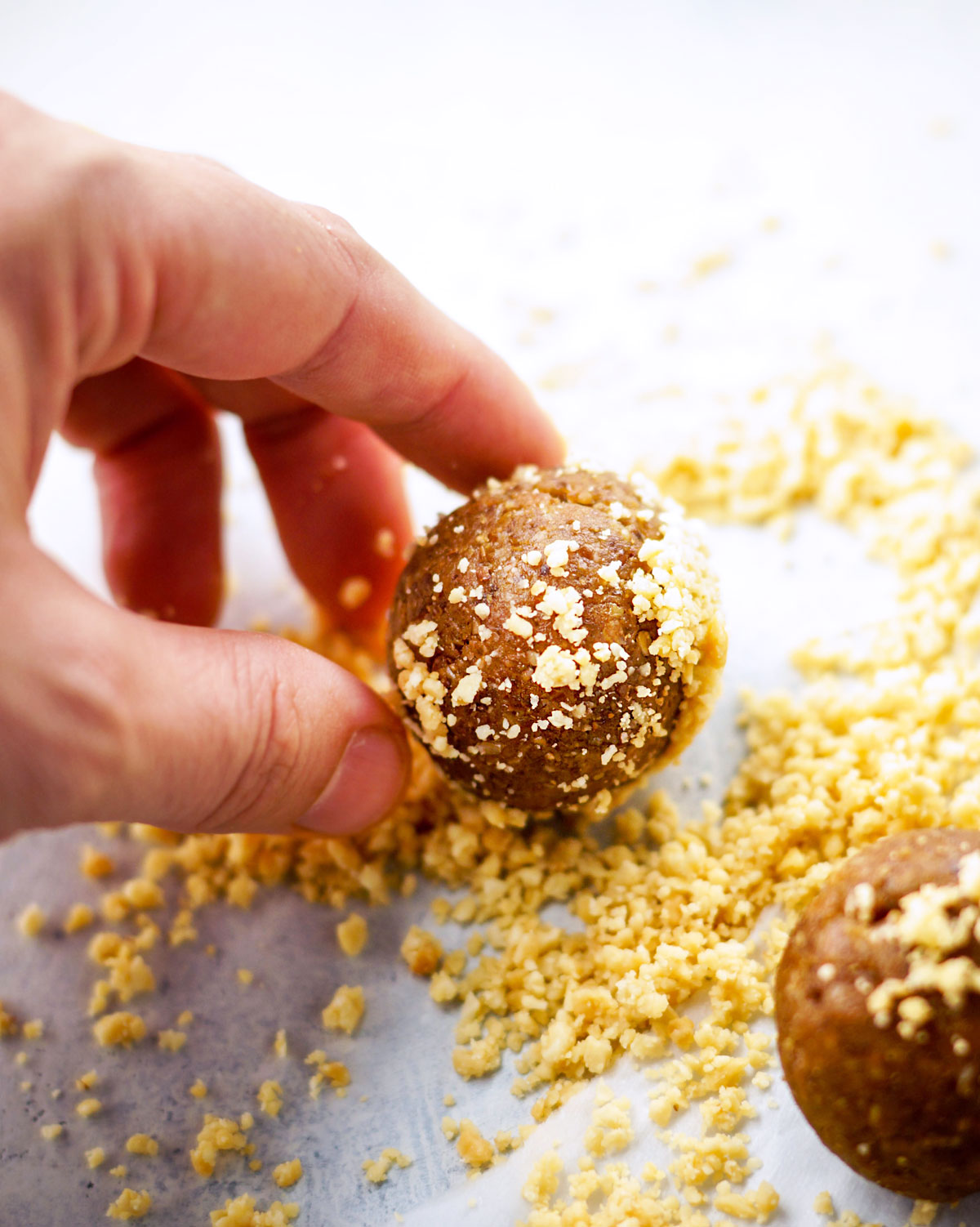 Date & Oat Lactation Energy Bites are a healthy alternative to lactation cookies that make a perfect snack for nursing moms! Vegan and dairy-free.

The veggie frittata is a great idea, either muffin sized or just slice and individually wrap the slices. Be sure to add a note as to exactly how to reheat so that a sleep deprived semi functional person could figure it out at 3am

Your list is really ambitious!
Initially they may have a lot of homemade meals or people coming over with food, so i’m thinki You strategize to bring some dishes for them initially, and then again a month or so after the baby is born. I brought over a batch of stew, more of the energy balls she loved and a ready to heat from frozen veggie and grains baked dish and i think they appreciated it even more because the initial flurry of visitors was over, they were tired of delivery meals and also not quite adjusted to how/when/what meals worked best to make themselves

These look awesome, thank you. I may do these instead of the oatmeal at the beginning. I conveniently have a week of vacation coming up that coincides with around when she is due so I will have some free time. I will definitely try to stagger the drop-offs so it’s not all at once. Thank you for the ideas!

@Ttrockwood I made the energy bites you recommended and they are delicious! I made a double batch and will freeze them and have them waiting for her when she gets home from the hospital. They were super easy to make and will definitely satisfy a picky eater. They basically taste like cookie dough!

seriously they’re the perfect stupid easy and crazy delicious thing- lots of ways to change up the flavors too. If/when you want a change up from the dates soft dried fruit like apricots, prunes, or even just big fat “baking raisins” can be soaked in hot water and then blitzed to create the base in place of dates, just keep the proportion the same.
I’ve made versions for myself over the years also using various nut butters or even coconut butter (not the same as coconut oil! Labeled as coconut butter)
I’m certain the new mommy will really appreciate these

I’m past the baby stages, but I’ve been making these gluten-free, low carb egg muffins a lot lately, and we all love them. They’re super easy to make as well as to eat, and there are millions of variations. My favorite so far have been with chopped ham, green chilis, and grated cheese. Also I use a regular nonstick muffin tin that I brush with canola oil so the muffins won’t stick. 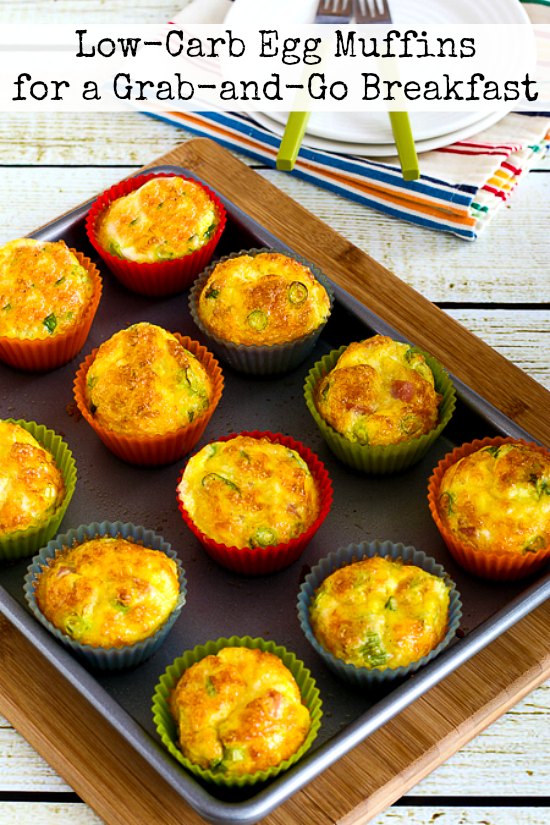