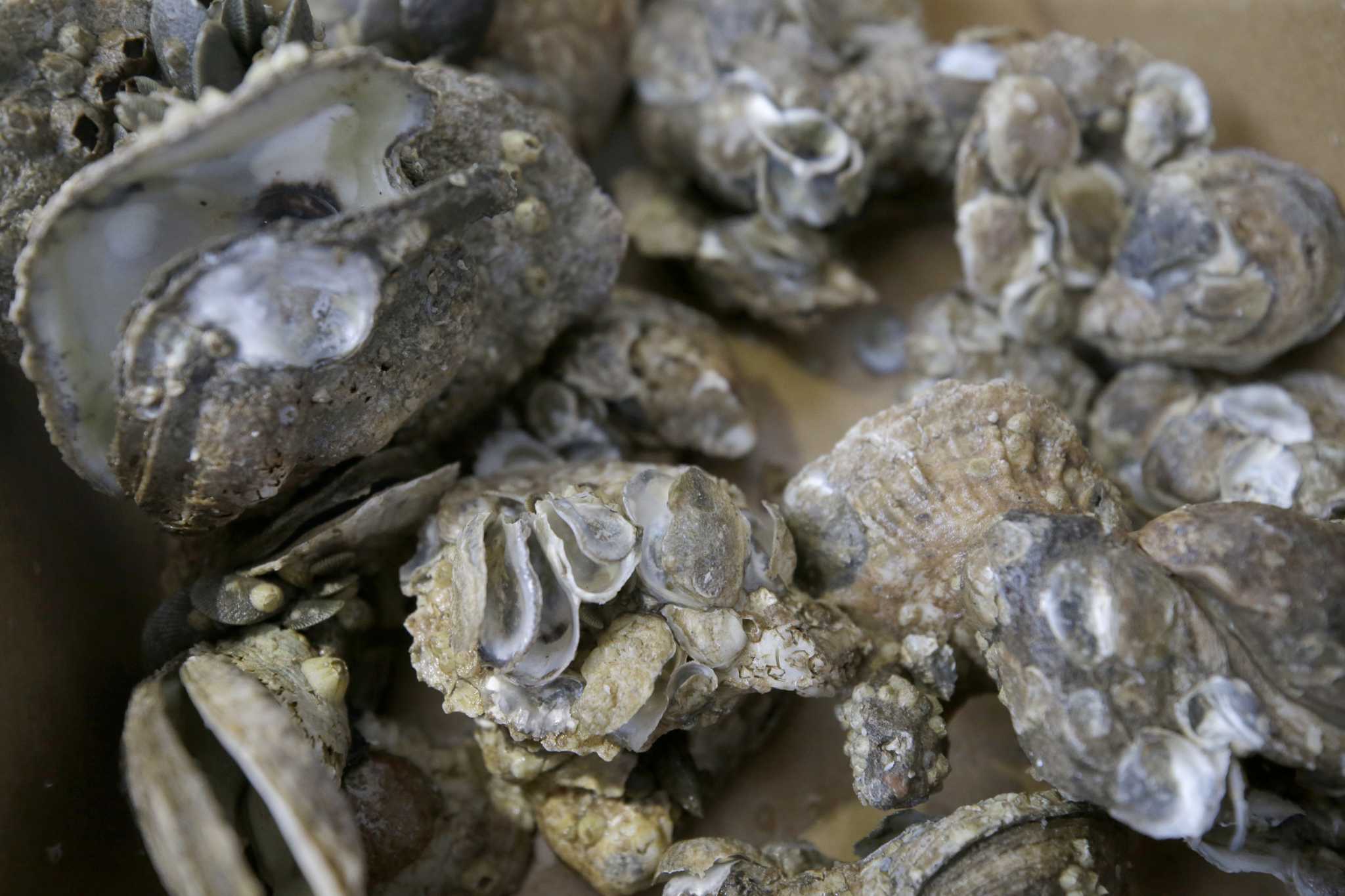 Oyster lovers will shell out more for the marine delicacy this fall, as freshwater runoff...

I read that article and called two of my favorite places to eat oysters, the fried ones at Fountainview Fish Market and the blackened at Benno’s Galveston.
I spoke with the owner at Fountainview and he said they had them, a dozen for 11.99, a good price, but forgot to ask where they got them.

Benno’s does not have them. We’re going to be down in Galveston in about a month and when I told the Wifeacita she was nearly catatonic. I had to remind her how good the whole catfish is and they’ll probably have crabs as freshwater doesn’t affect them. I’ve caught them below the Lake Livingston dam fishing with minnows.

I’m going to call Red Snapper Inn when they open.

East Matagorda shouldn’t get too much runoff but the Colorado flows through West Matagorda. There’s always San Antonio Bay and Louisiana. A few years ago every time I went to Captain Benny’s the oysters came from San Antonio Bay. The best I’ve had came from Matagorda at the original on South Main. All you have to do is ask the shucker where they came from as the sacks are labeled with the origin.

We were in New Orleans in the mid 90’s and they were getting oysters from Texas. Oysters are cyclical in the various bays and the boats go to the “hot” ones.

One thing that drives me crazy is when oysters are labeled Gulf oysters. Oysters don’t grow in the Gulf as there is way too much salinity, hence the problem with Galveston Bay as there is virtually no salinity, post Harvey. I was pretty certain this would happen and the article confirms my fears.

Thanks JC for sharing your recon! I’ll have to check out Blue Horizon over in the Village; I haven’t been back since my first visit in Feb but they had Matagorda Bay oysters.

Actually, reading the article, it seems a fair conclusion that the oyster beds are really resilient, given all they’ve been subjected to my Ma Nature in the past decade or so and they’re still there. I remember the dire prognostications after Ike.

I only asked at Benny’s once where the oysters were from; at the one that used to be on 59 @ Wilcrest the manager told me they used Matagorda Bay oysters. I never asked again, didn’t realize it might change very often.

I can remember in the 70s, when I was new in town, an acquaintance who was fixated on seafood, not necessarily oysters, was taking me around, introducing me to all the great places back then - Kaphan’s, Gaido’s when it was on S. Main, Angelo’s, Christie’s, Dentler’s Pier 21. As I recall, everyone was bragging back then about serving Louisiana oysters!

Talk about a who’s who of closed seafood restaurants. I ate at every one and miss them all and I’ll throw in San Jacinto Inn. I just got off the phone with Red Snapper Inn and they have fried oysters from Matagorda. It looks like a detour through Surfside will be in order when we go to Galveston for the po boys at Red Snapper Inn, the scenic Blue Water Highway, and the general loathing of the Gulf Freeway.

Angelo’s on South Main had a fire and they temporarily re-opened in a trailer. The fellas and I went one night and we sat next to the door with Mr. Angelo presiding with a big smile on his face. I don’t how he could do that as we did serious damage to the all you can eat raw and Rockefeller, fat salty ones as good as I ever had.

The oysters will be back. The problem after Ike was the reefs were silted over after the massive tides but the were reseeded with more shells. Post Harvey the good news is all the fresh water kills a parasite that feeds on oysters.

Didn’t mention San Jac because I didn’t ever go there with that acquaintance, although I can’t remember who introduced me to that one. Also, Capt. Benny’s which he never went to. I learned of CB from my brother who went to the original one, on Main @ Holcombe, in an actual shrimp boat, hauled up from the Gulf, when the menu was not much more than cold boiled shrimp, oysters on the half shell, and draft beer! I never went to that location, nor to the one a little further south on S. Main near Greenbrier (and the Stables Restaurant). I never went to the Main St. CB until the present location where S. Main and OST merge.

But yeah, I miss 'em all, too. Probably Kaphan’s and San Jac Inn most of all. I have eaten, years ago, at Galatoire’s and Antoine’s (is that right?) in Nola; Kaphan’s was every bit the equal as far as I was concerned.

Kaphan’s had a nice Colt 45/Astros collection of stuff.

San Jacinto Inn served peeled shrimp while you had to peel your own all you can eat at Angelo’s, the horror.

Why are all the best restaurant’s gone, like all you mentioned previously plus the Stables with the strong drinks and good, affordable prime rib. 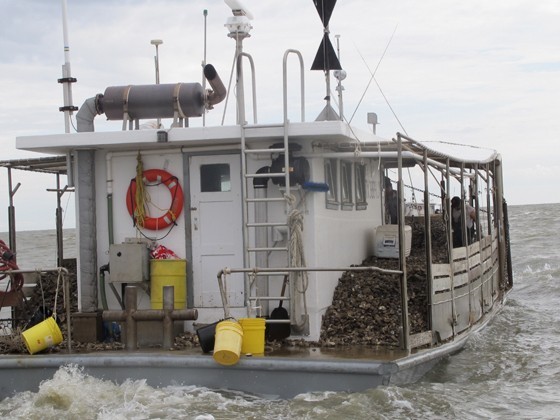 In the days after Harvey the world (well, the internet anyway) was getting to know Houston native Raz Halili. The 30-year-old oysterman was rescuing people from the flooded San Leon area in a boat with his cousin when a selfie he snapped went viral...

There’s some reference to Matagorda and San Antonio bay conditions, too. Ready for Louisiana oysters?

I called Red Snapper Inn last weekend and as I posted they have Matagorda oysters. I’m assuming they’re from East Matagorda which has runoff mainly from Caney Creek on the far east end, West Matagorda gets runoff from the Colorado and Lavaca rivers.

A call to Fountainview Fish Market this evening revealed they do indeed get theirs from Louisiana. The folks over their think there is nothing finer than the local oysters, while the best Texas ones I’ve had are from Matagorda. It’s a win all around unless the prices spike too high.

I’ve fished virtually every bay on the Texas Coast from Galveston East Bay to the Lower Laguna Madre and my favorite by far is East Matagorda. I’ve pulled some easy limits of speckled trout and redfish including a trout that ties as my best with two other fish.

My second favorite may surprise some people and it’s the Galveston Bay complex specifically the reefs of Trinity Bay and West Galveston sand flats in the winter. The water gets crystal clear and the key to catching fish is finding the off color streaks where the fishing can be fast and furious.

Harvey’s freshwater trashed most of the bay system for fishing except far East Bay and West Bay where I’ve got a trip planned late October. Wish me luck, por favor.

Good luck and enjoy! You sure know your oyster reefs.

Ditto what Lambowner says. Just be sure to taunt, uh, share with us tales of your success.

I’m not a bragger by nature but I have been known to dump 8 or 10 bitten in two plastic baits on a friends porch after a good outing.

I’m just hoping for some fishable conditions with not much wind and if we’re lucky there will be gulls feeding over schools of trout.

What anniversary are we celebrating?

I don’t know about brucesw, but the Wifeacita and I celebrate our 10th later this month.

There will be Carrabba’s on Kirby and initial thoughts are shrimp and crab Osiel, mussels, seafood ravioli, and some fettuccine Alfredo but open to change.

Decimated means a reduction of 10% …as in decimal, or decade. I guess it could have been worse.

What anniversary are we celebrating?

On the day I posted that, Bruce’s name had a little slice of cake icon denoting it was his anniversary of joining the site.

Decimated means a reduction of 10% …as in decimal, or decade. I guess it could have been worse.

I suspect his usage was more along the lines of definition #1, but perhaps not.

AHH! We all came last Sept. I think!