Now, I have to say I needed to convince myself that we wanted to eat here. It’s the “Pan Asian” food idea that gets me. I love East Asian foods and have regularly eaten them in restaurants specialising in the individual cuisines. But can somewhere cook such geographically diverse cuisines as the food from Beijing and the food from Singapore and do it well. The distances involved are immense. It’s as though someone set up a restaurant in the UK saying they’d cook Norwegian food and countries in between until they reached Iraq. But Harrogate isn’t well endowed with good restaurants, so here we were.

In the event, they do a decent job and we had a nice evening. OK, the Sichuan food wasn’t as vibrant with spice as the Sichuan restaurants you’d find in Manchester’s Chinatown. And the Cantonese/Hong Kong dishes seem even more Anglicised than your local “really good” Chinese restaurant.

Tempura vegetables were a light as a feather starter. Crisp batter coating mixed vegetables with a fairly nondescript dipping sauce. That was followed by Cantonese Pepper Crusted Beef. Chunks of lightly cooked steak coated in a fair bit of pepper with stir fried vegetables in a savoury sauce. Another starter was steamed vegetables gyoza – Beijing style dumplings. They were well made soft dumplings (they offer them steamed or fried) enclosing a fairly bland filling of pak choi and mushroom. A dipping sauce of black vinegar and garlic perked them up. Then a main course of “gan ma row”, the menu indicating that this was a Sichuan dish but Google only finds this name linked with the restaurant, so I’m unsure what dish they were trying to cook. It’s basically a stir-fry of belly pork, spring onions and peanuts with Sichuan peppercorns, red chilli and garlic. I’d expected it to be quite fiery as Sichuan dishes often are but, in fact, this was fairly muted in its use of spice. Steamed basmati rice should have been light and fluffy and was really claggy.

We don’t often order desserts and almost never in an Asian restaurant but thought we’d give it a try. There’s a nicely crisp rice flour pastry balls, stuffed with red bean paste, coated in sesame seeds. Not overly sweet. And, from Macau, a version of Portuguese custard tarts harked back to an imperial influence.

All in all, a decent enough dinner and I’m sure that, if we were local, this would be a restaurant to return to.

Then a main course of “gan ma row”, the menu indicating that this was a Sichuan dish but Google only finds this name linked with the restaurant, so I’m unsure what dish they were trying to cook. It’s basically a stir-fry of belly pork, spring onions and peanuts with Sichuan peppercorns, red chilli and garlic.

They just gave it a fancy name (in Mandarin): “gan ma” means “godmother”, and “row” is “meat” (belly pork in this case), so they named the dish “Godmother’s Meat”.

Funnily, your belly pork dish was almost similar to the one I had at Guizhou Garden (Kuala Lumpur) from a while back, but which I’d just posted on this morning. Guizhou cuisine is a close cousin of Sichuan cuisine as the two provinces are neighbours.

Guizhou (or Qian) cuisine is a close counterpart of the more widely-known Sichuan and Hunan cuisines. In the landlocked central part of China, Guizhou province is sandwiched between Sichuan and Hunan provinces, and all three cuisines share a common love for spiking their food with copious amounts of dried chilis. Guizhou cuisine’s trademark characteristic is the combination of spicy and sour flavors of most of its dishes. The tongue-numbing chili levels in Guizhou’s trademark dishes easily matc…

I’d expected it to be quite fiery as Sichuan dishes often are but, in fact, this was fairly muted in its use of spice.

You’re lucky!
The version I had in KL didn’t even bother to mute the hellish levels of its chili-spiciness, and our gastronomic journey there was more like a descent down Dante’s inferno.

Thanks for the translation, Peter. Yes, I’d just read your other post before coming to this one (i always read new threads first)

Yes, I’d just read your other post before coming to this one

It’s really funny how all these Sichuan/Guizhou/Hunan chili-spice thing came about. There was this dried chili condiment called Lao Gan Ma that was supposed to be the most popular one in China. So, one billion Chinese would testify to it, but I’d never, ever heard of it till just about two months ago.

And I’ll bet you can’t guess who introduced it to me: Nigella Lawson!

In her latest BBC series, Cook, Eat, Repeat, she just kept going on and on about her love for this crispy chili flakes in oil condiment, which she’d add to her noodles in soup, her fried chicken sandwich, etc.

So, I went out and got myself a jar! 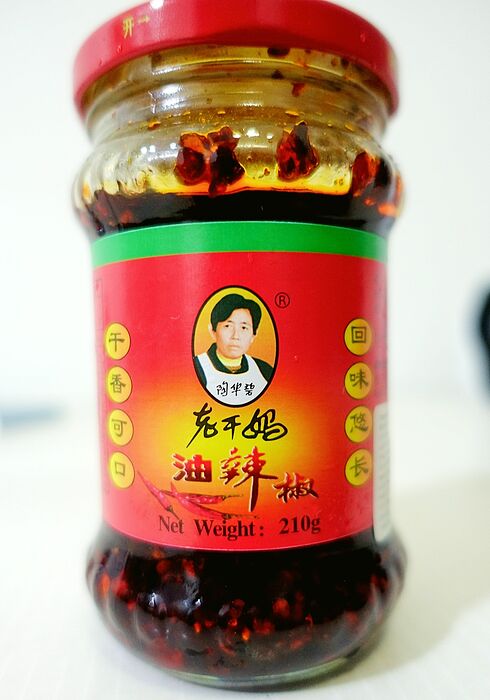 Lao Gan Ma simply translates to “Old Godmother” in Mandarin, which was why when you mentioned “gan ma row” at Orchid, it rang a bell immediately.

The Lao Gan Ma brand originates in Guizhou, but is very popular in Sichuan and Hunan provinces as well. It’s widely available in other parts of China as an “exotic” dip, but folks in Beijing or Shanghai definitely won’t have the same chili tolerance level as their Sichuanese and Hunanese counterparts, so they’d only have this condiment served in tiny little saucers on the table.

The jar in your photo looked familiar. I realised I have one in cupboard bought for me as part of a Christmas present. And I asked about it on this thread - Lao Gan Ma - Crispy Chilli in Oil . Still unopened, I’m sorry to say.

This stuff is so lethal, you don’t even have to refrigerate it after opening, and it practically lasts forever.

Nigella Lawson used some to spike-up her mayo dressing with chili heat - for her fried chicken sandwich: that one actually looked pretty tasty.