SlipPit process will come next. 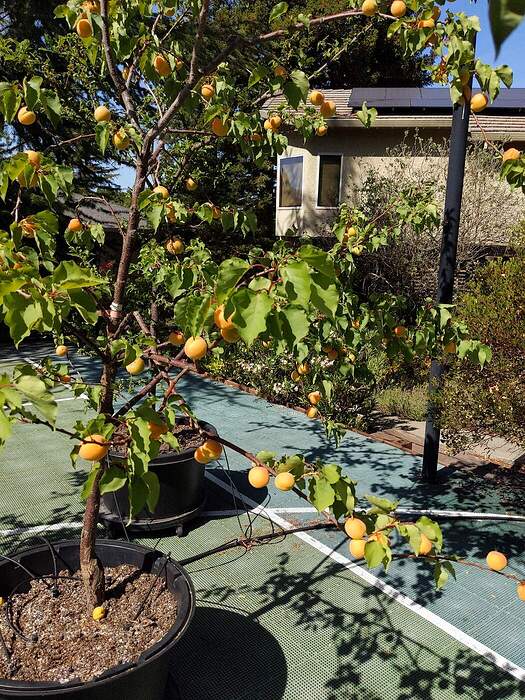 The birds got at least half; some pecked a few times, and then falling to the ground. This was with cheap netting that I felt terrified about, dreaming of trapped animals, but the birds were crafty. 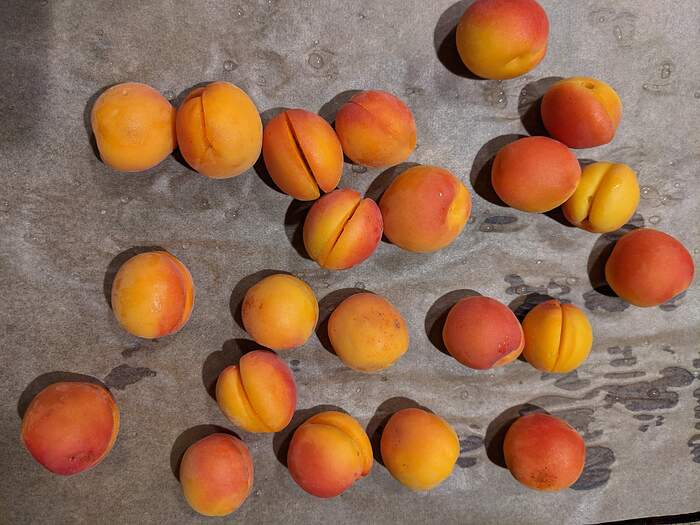 They are going in the oven tonight at 100 f, cut to the pit but leaving pit in. Tommorow temps are expected to reach 111 f , and it’s a dry heat, so l will, put them outside, covered with cheesecloth, removing the pits when the time seems right.

I got no sulfur dioxide.

Sorry to hear about the failed experiment! I think the sulphur treatments are to preserve color, so they don’t go brown.

Yikes, 111 degrees!?! Does this kind of heat happen frequently? Good thing the humidity is low!

So you just answered my question:

“The birds got at least half; some pecked a few times, and then falling to the ground. This was with cheap netting”

My first year with my peach tree I got a couple (2?) peaches and they were FANTASTIC. Since then we start with about a dozen small fruits and each year they disappeared. I assumed it was the deer, since the bark on the bottom of the tree was gnawed by something, so this year I was prepared and fenced the tree off. We had about a dozen baby peaches and one by one they were disappearing with a few found on the ground. My suspicion was birds and I’m planning on netting the top of the tree next year. I guess I should have known that, dammit.

Yet my recent addition of a plumb tree has many baby plumbs coming in, nothing has bothered them. My pears are doing well too. Still not figs.

Just to be clear, the "didn’t work " refers to choosing the color of the emoji. Sometimes it works.

The sulfuring process must stink to high heaven! I made a bunch of rodent bombs, during a Vole population explosion, made of agricultural sulfur, potassium nitrate fertilizer and sugar. This mixture was packed into rolled up newspaper tubes. Once ignited, my brother and I stuck them spewing smoke into every hole we could find. We came in reeking of sulfur and the smell stayed in clothing for a long time.

Still, it got rid of the voles!

Depending on where you live, peach/plum thieves include:
Squirrels=terrible; they take peaches and go hide them, get another until they are all gone.
Chipmunks=less trouble than squirrels.
*Raccoons and Opossums raid tress during the night.
*Groundhogs can climb trees if there’s a good reason, like peaches.
Birds generally leave a mess and don’t fly off with peaches. You’ll find a lot of peck holes and ragged, partially-eaten fruit.

*Claw marks on young trees with smooth bark can indicate these guys. Broken branches is another sign.

When the deer/rabbit fence gets redone, I’ll be adding an electric fence wire or two where the chicken wire fence (lower band) meets the deer fence mesh. So, when the climbing thieves get to the top of a well-grounded chicken wire, they’ll get zapped and hopefully convinced it’s not worth trying again.

One year, a Shiro plum was loaded with fruit and tall enough where the branches were too far for a squirrel to jump straight up and start eating. I snapped two sections of metal stovepipe, for wood stoves, around the trunk so squirrels couldn’t get a grip and climb the trunk. It worked great, there would be this bizarre metal-scratching sound coming from the tree. Here, squirrels take any green peach, plum, etc.

Eventually, one of the heavy branches lowered enough to necessitate…alternate squirrel control measures.

The drying process continues, so the jury is still out. You’ve probably told me already but how long does it take in the dehydrator? I understand it can take days outdoors. Growing stonefruit, and drying them outside was once the main industry where I live.

The History of Dried Fruit Farming in Vacaville California

Why Farmers Count On Drying Fruit When there was a glut of ripe fruit to ship, or when fresh fruit prices fell during the season, farmers cut and dried 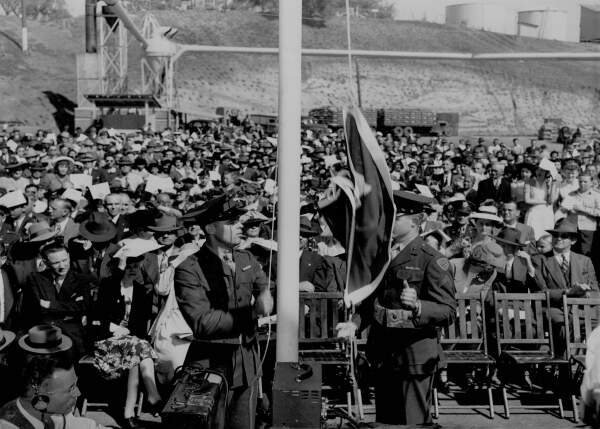 A look back at Basic Vegetable Products in Vacaville

If orchardist and prune drying company owner Ed Uhl had not gotten over his worry about onion dust contaminating his prunes and making them taste like onions, Jack and William Hume may not have est…

My husband thinks the solution to controlling most “varmints” is to “stone them”. Yesterday the solution was it was so hot! Not as hot as today, but there seemed to be notably less hysterical chirping than I’ve gotten used to.

Today’s high, which usually comes around 2 or 3 is supposed 111, which is high even for us. We get plenty of days over 100, especially in August if it actually hits 111, it might be a record. I believe the previous record was 110.

According to a linked article, in one of the historical ones you posted, apricots take 3-4 days, in the sun, to dry. They’ll go brown without sulfuring, but that won’t hurt them.

According to Joanna White, who uses a dehydrator:
Preparation: wash, halve, remove pits and place on trays, cut side down.
Dehydrate: at 100 degrees F for approximately 60 hours, or until pliable with no pockets of moisture.

Even if the humidity here allowed natural drying, it would run into varmint thieving and the problem of ants getting into the food. I have a big stainless steel dehydrator which is used to dry food, make yogurt and sprout seeds when it’s cool. My guess is apricots do not like humidity and that’s why they don’t live for long here. Peaches, however, do great.

I finally got my second blueberry bush, so I’ve built my temporary fortress to keep the squrrels and bunnies away. It doesn’t have any fruit, but something kept eating the fresh leaves and gnawing on the branches. So far so good, and i haven’t noticed a breach. I’ll be good until they get another 4" taller.

I’ve also fallen into the citrus rabbit hole. I just got my dwarf Meyer lemon tree to accompany my dwarf makrut lime. I also just ordered a dwarf Satsuma. I haven’t even checked if I have enough sunny windows for them for the winter.

I just harvested the last of the lemons, one of the few edibles I grow in the ground! It is crazy hot, and water is in short supply here. I have to wonder whether in the ground or in containers will be better for citrus going forward.

One of husband’s patients gifted him with a bag of fairly green apricots. 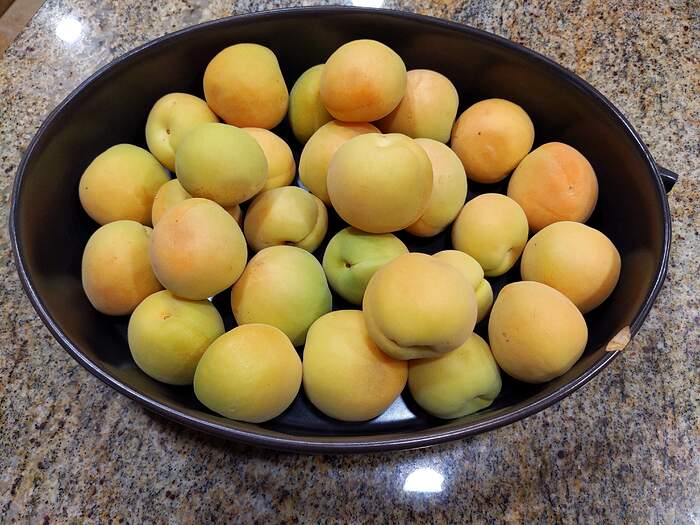 Yikes, 111 degrees!?! Does this kind of heat happen frequently? 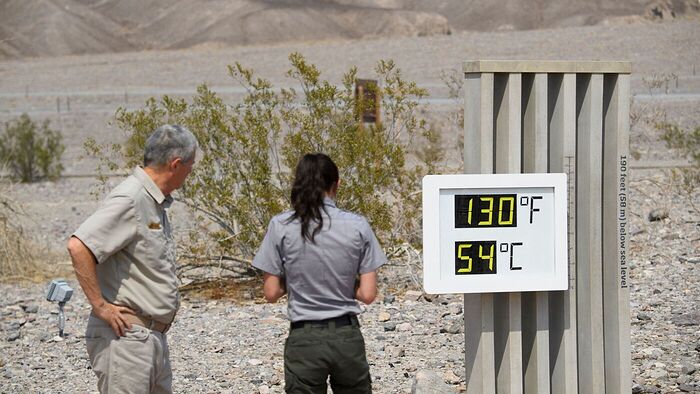 From the Great Plains to the California coast, a powerful "heat dome" is setting records. This one is stronger and bigger and is appearing earlier than normal.

The trend is not good. Coupled with the mega drought going on, the climatic factors will make living, in what was once marginal areas, harder to sustain. I know folks who’ve left CA and moved to Kentucky, due to the cost of living and climate issues. I wonder how all the orchards in CA, many located in deserts, will survive? Past estimates of global warming effects didn’t include the many coal-fired power plants China constructed. I worry for family and friends that are in different parts of CA.

Pears (not bears as I claimed in WFD), I’ve got pears! 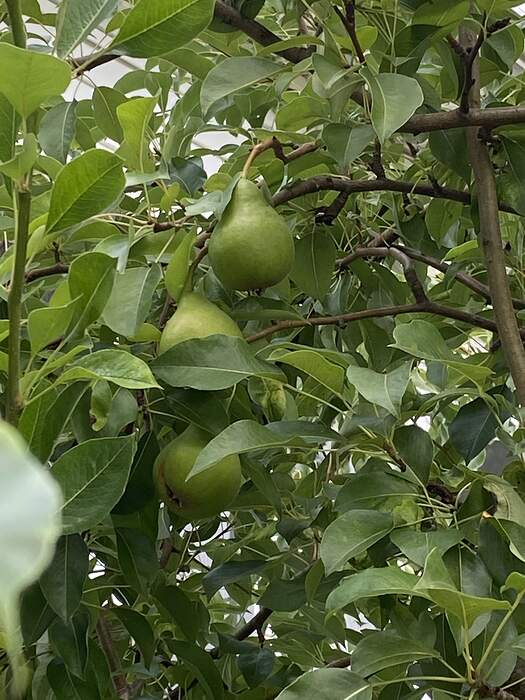 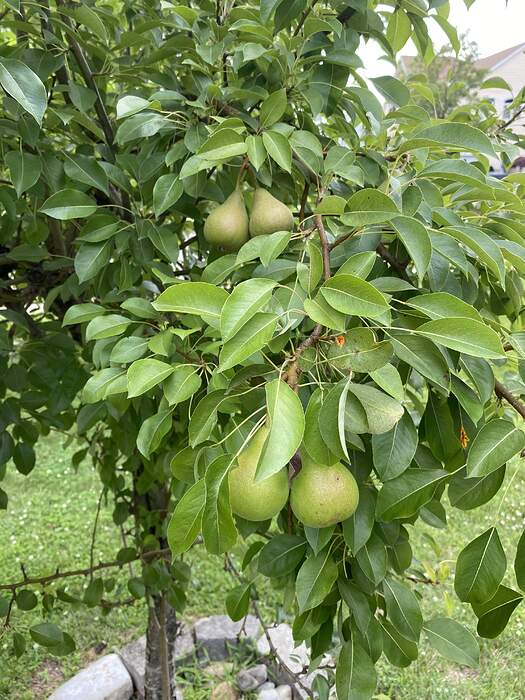 Fig tree is huge!!! No fruit 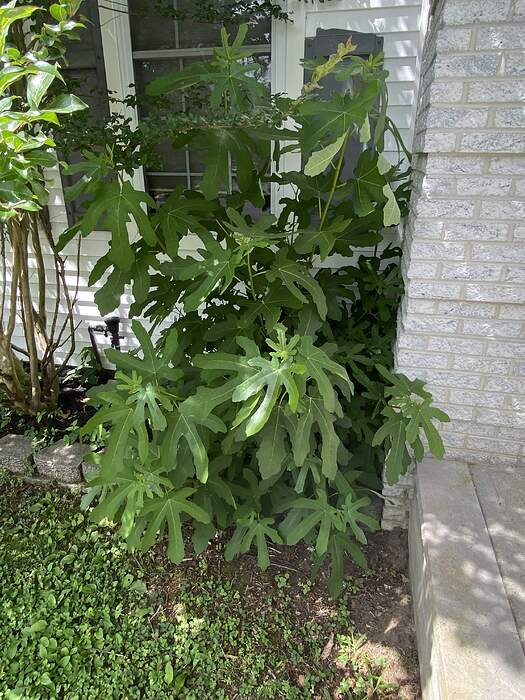 I started with almost a dozen peaches, now I have none! 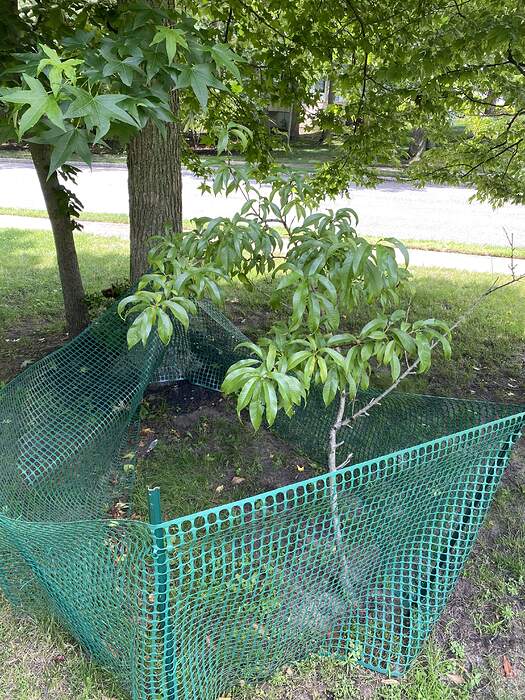 The deer are getting my berries 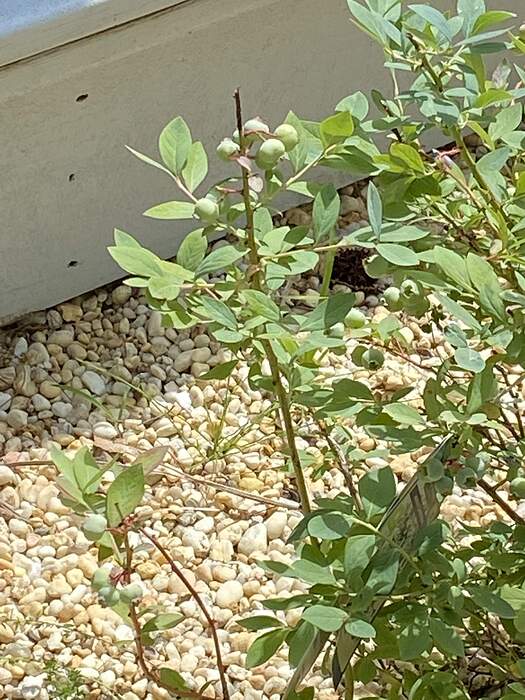 But somehow they are ignoring my plumbs!!! 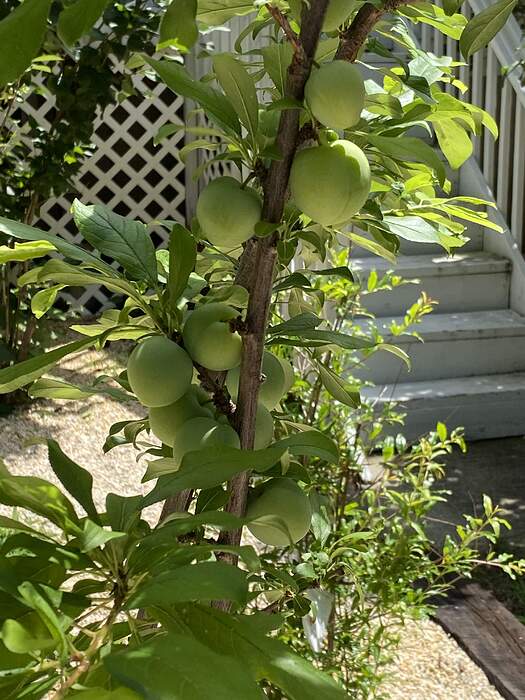 They have eaten away my bing cherry tree. 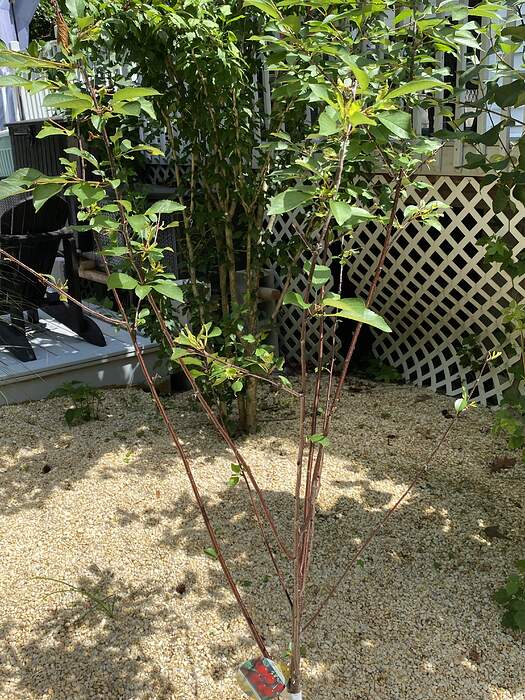 Not pictures my pomegranate tree looks healthy but ho buds, no clue how they are supposed to grow.

That makes a lot of sense.

Here for 2 weeks in May, very cold weather, hail and rain. My 2 fig trees lost 90% fruits that were on the trees since March, I’m glad that finally I see the tiny fruits are coming back. 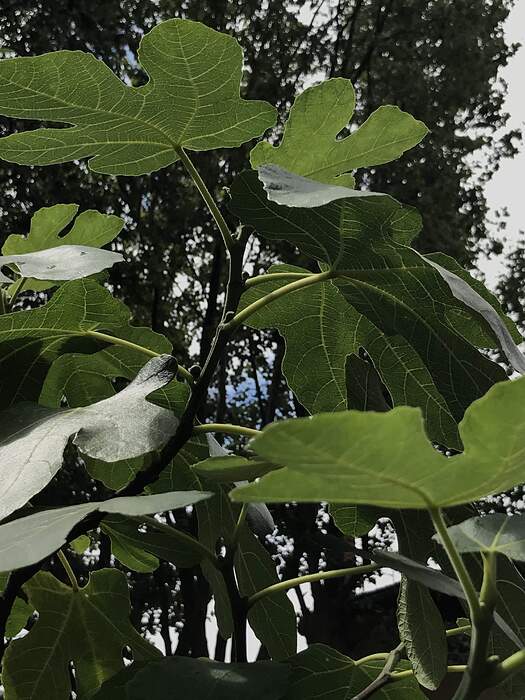 Cherry tree was spectacular this year, unfortunately the weather was cold, and the tree has abandoned many fruits and some were eaten by birds. 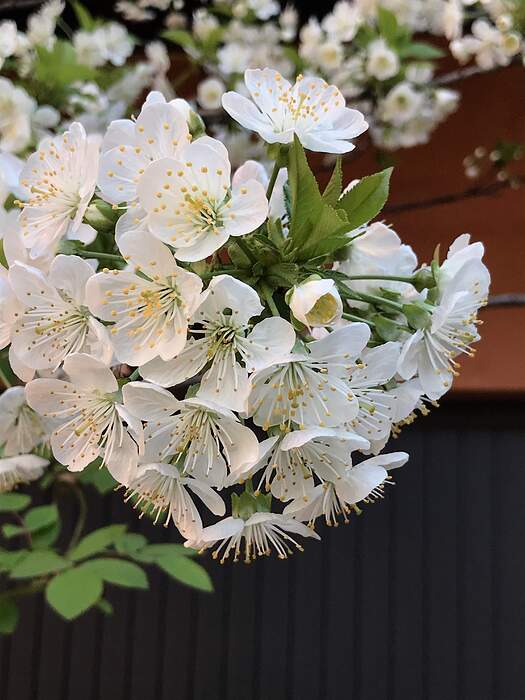 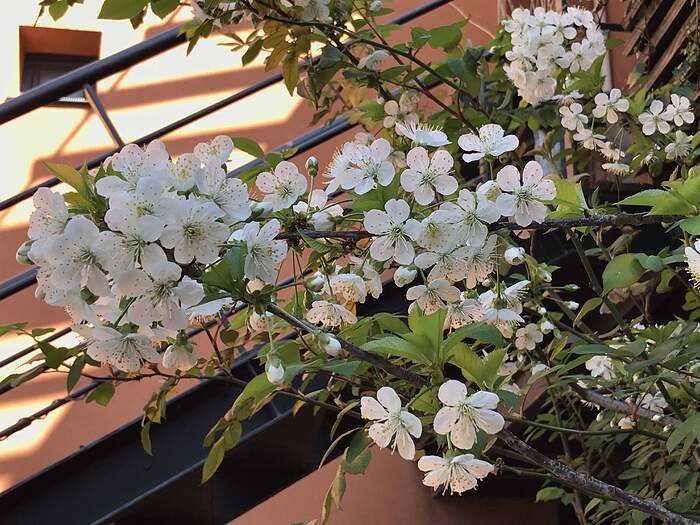 Happy with the citrus trees with is new shoots, most branches died due to the brief snow of 1 day back this winter. Absolutely need to buy bigger pots for repotting. 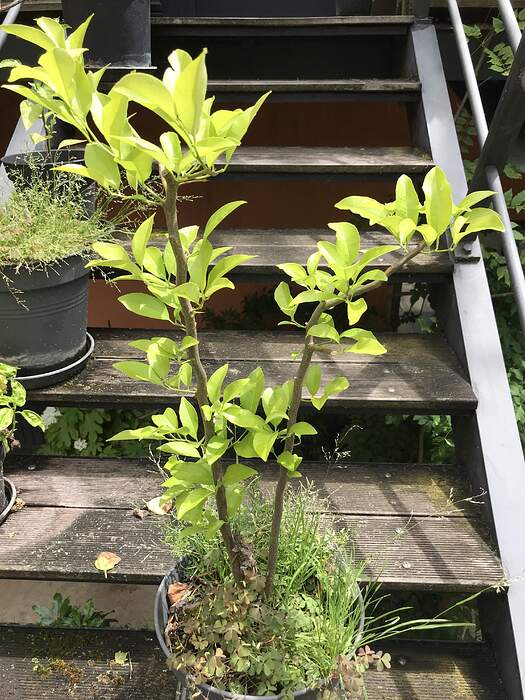 I had bought some figs at the farmer´s market …
They were delighting !

Such pretty flowers. I love figs, but the stories of the wasps kind of creep me out.

I think I’m fruit tree’d out at this point. I added a baby dwarf Meyer lemon trre, and also a dwarf Satsuma mandarin tree to the yard, so now I have 3 types of citrus that I have to drag back indoors for the winter. That’ll be more than enough for my poor back.

Curious @naf, what size pot do you use for your citrus trees?