Looks good to me.

I used the remaining lamb and rice to make dolmathes. 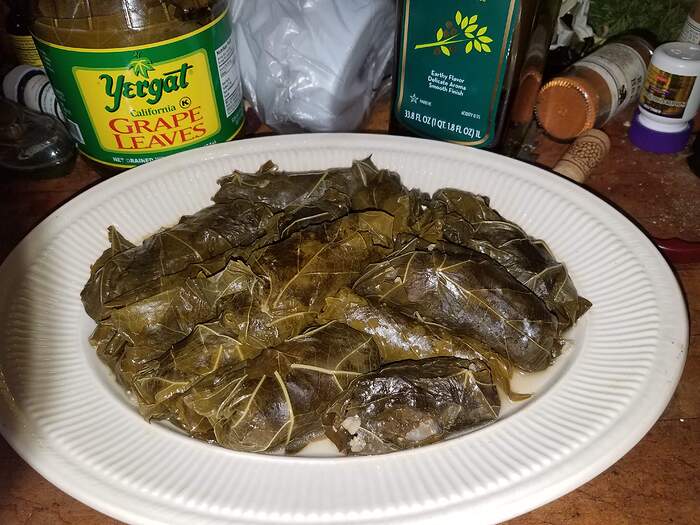 After wrapping the stuffing in the grape leaves, I simmered them in just a little water for about 15 minutes. This was enough to cook the leaves. Other online recipes I looked at wrap the leaves in uncooked lamb and rice, and simmer for up to 45 minutes.

Then, my first ever attempt at avgolemono. It’s a little thinner than I would have liked for a sauce (as opposed to a garnish for soup). One whole Meyer lemon, one egg, and I used the liquid that the dolmathes simmered in, which is why the sauce doesn’t have the typical golden color that avgolemono usually has. It took just a couple of minutes with the immersion blender. 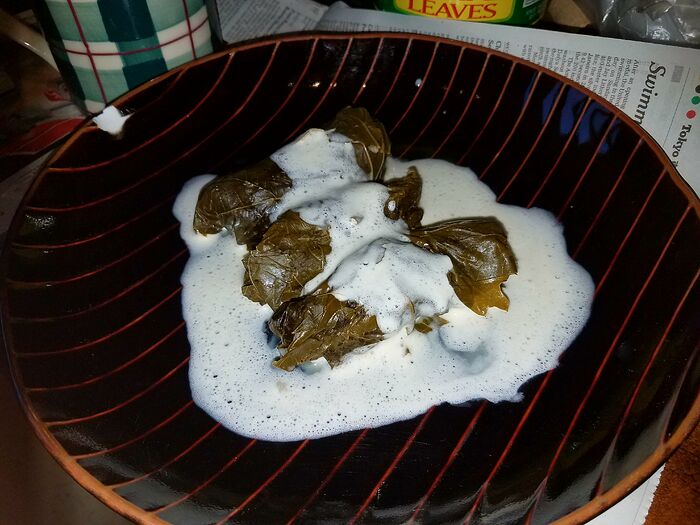 So, with the best of intentions, I went to buy frozen spinach and phyllo to make spinach pie.

Then I remembered and found this, so laziness and temptation struck in one fell swoop.

When I make my own, there’s more filling - and no dill. But this was really quite delicious - for nkt having had to do much. 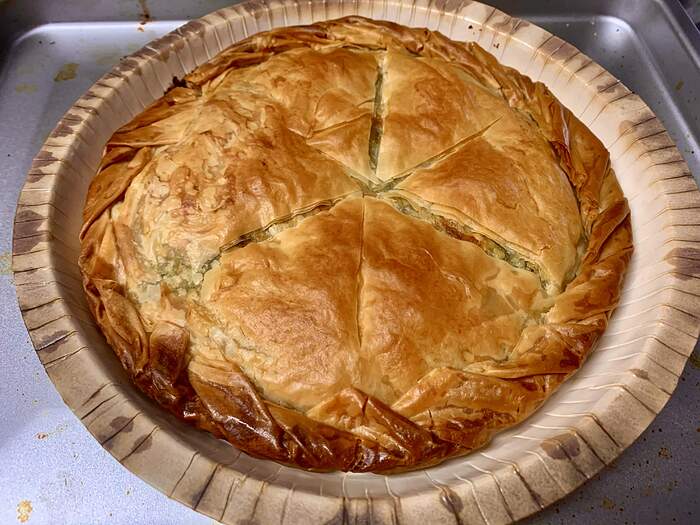 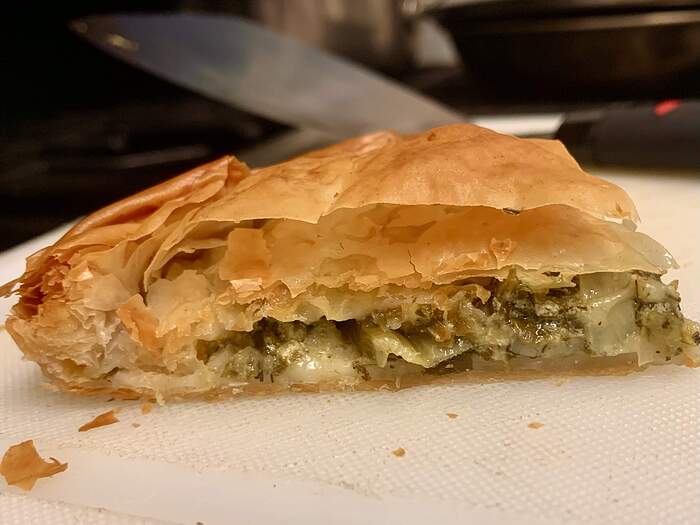 I had also intended to make the green beans, but forgot to put them in my cart. So I used the same prep on the broccoli slaw I did have, with remarkably good results! 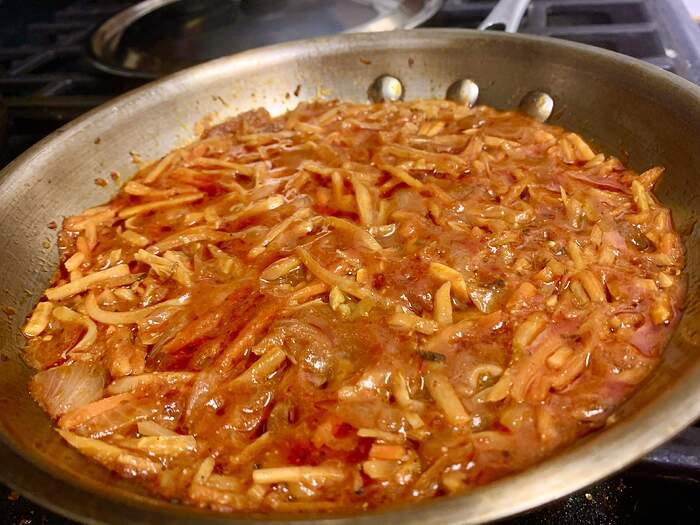 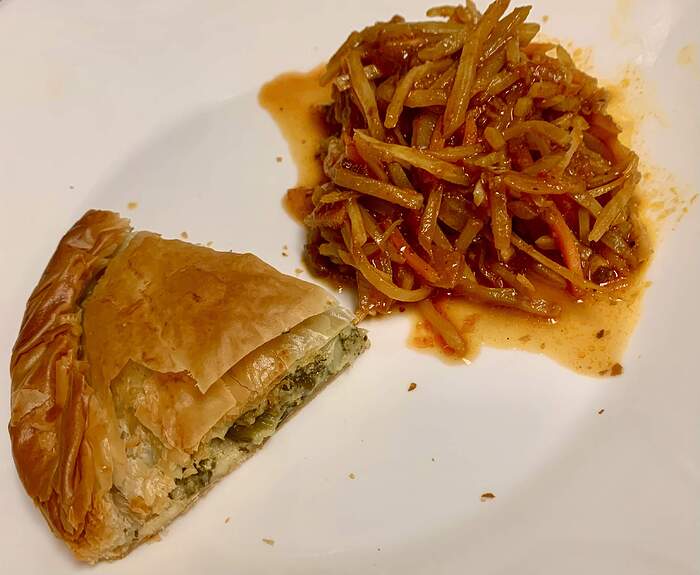 Then I remembered and found this , so laziness and temptation struck in one fell swoop.

Well that looks plenty good to me! Greens pie is a lot of work, what with all that washing, blanching, and chopping.

I can see that spinach pie sneaking into my cart on my next TJ’s run. 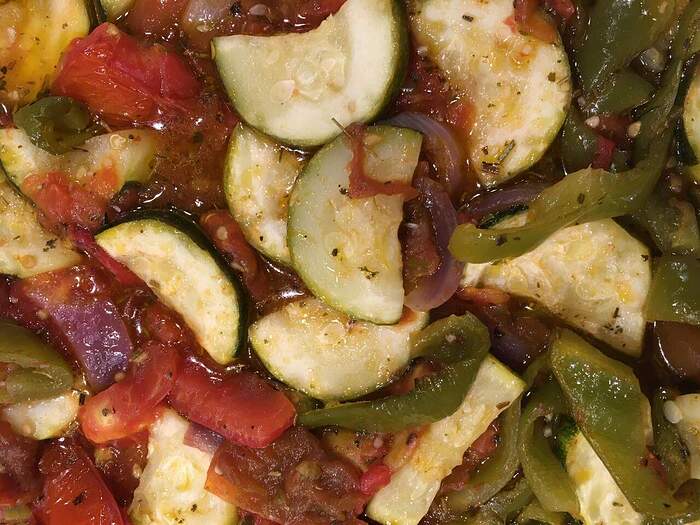 Thought you might be inspired by my brunch yesterday:
Baklava pancakes ( nuts between the stacked pancakes, drizzled with citrisy cinnamony honey baklava syrup) and spanakopita topped with a poached egg and hollandaise.
https://www.instagram.com/p/CSUs5paL0Qo/?utm_source=ig_web_copy_link 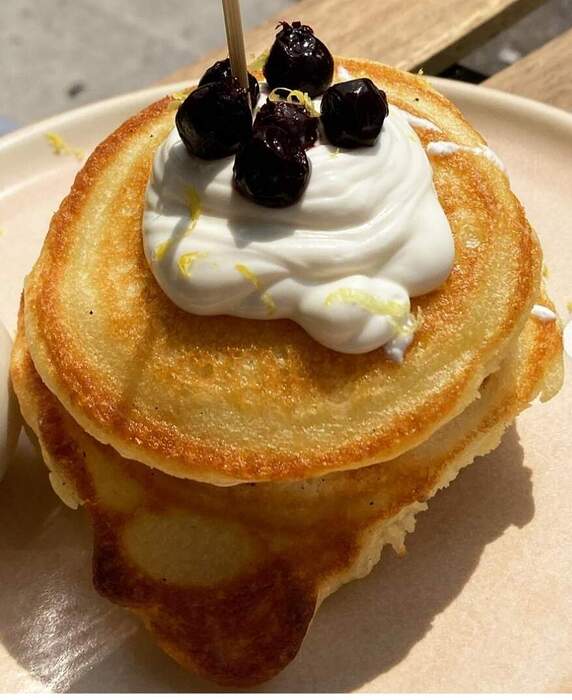 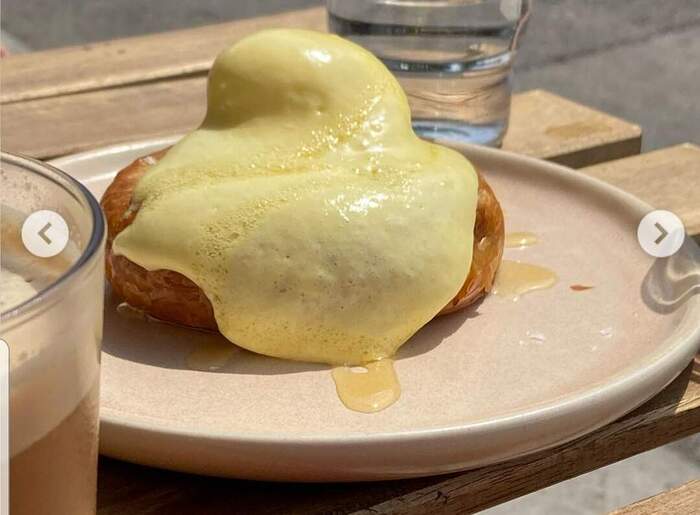 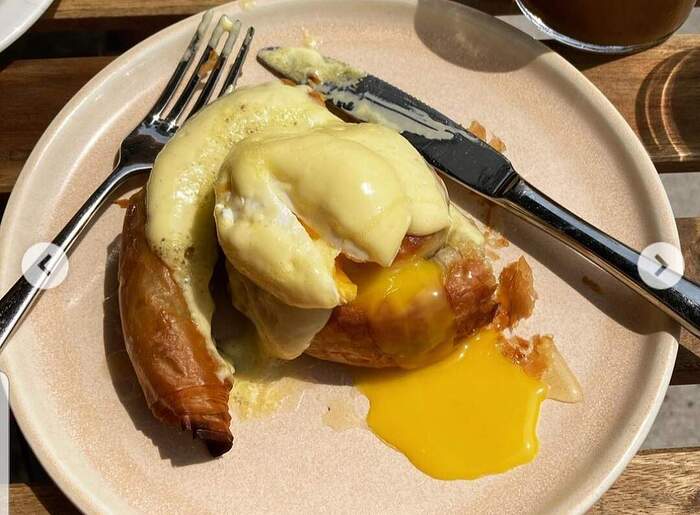 I thought of a cutesy name too late for that broccoli sale - FAUX-solakia!

Re: frozen spinach for spanakopita

A lot of Greek North Americans use this short cut. The result is a much mushier filling.

We use a salad spinner to dry the spinach completely after it has been washed. Then it gets chopped. It doesn’t get blanched. The spinach and other greens are added to the sautéed-in-olive-oil green onions , then beaten egg and feta is mixed in. This mixture is then used to fill the filo.

There’s a flat style without egg, that’s usually only an inch or 2 thick, as well as a thicker style made with eggs, with a more set filling that is almost like a frittata, that is 3 or 4 inches thick. The second type of filling is what our family recipe is, and we fold it into triangles or make a 9 x 13 inch pyrex dish spanakopita
Felicity Cloake mentions some heavyweight Greek chef’s spanakopitas here:
https://www.google.com/amp/s/amp.theguardian.com/food/2018/aug/22/how-to-cook-the-perfect-spanakopita-greek-spinach-feta-pie

Thanks!
What size are the bags of spinach, and what size pie?

(When we make Indian spinach chicken or lamb or shrimp, it’s always from fresh too. I use frozen in a pinch - or out of laziness, but it is certainly a different outcome.)

Two 227 g bags of spinach: 1 bunch curly endive.
Spinach shrinks so much- the outcome will be good as long as the spinach makes up half to 2/3 of the greens ( or even less) the endive, onions and herbs being the other 1/3- 1/2. Right now, I would use whatever I had in the garden. If the spinach ends up being wilted/not good, leek pie is also pretty delicious.

Swiss chard could also be used instead of spinach. I’m thinking about using callaloo, as well, since I grew it this year!

The bigger leaf spinach is preferable to the baby leaf, less labour involved. Up here, usually baby leaf is sold in bunches, and larger leaf is in cello packs.

Bulgarian or Macedonian style feta is a little creamier, and gives a nice flavour.

Re: frozen spinach for spanakopita

A lot of Greek North Americans use this short cut. The result is a much mushier filling.

Recognizing it takes the short cut part out, I wonder how it would do with a really good long drain and a trip through the salad spinner? For me the major appeal of frozen veg is I can have them whenever I want. I have to take the meat out a day ahead, why not the veg? Two days (one to thaw, one to drain) is okay with me as we meal plan a week or more ahead.

Thank you for Felicity Cloake’s Guardian article that you link upthread! I learned so much more about greens pies.

One big lesson: I will now claim my “BLD pie” as a legit hortopita. (Why BLD? Because it’s tasty for breakfast, lunch, or dinner!) I cobbled this together from various recipes as way to use up summer greens when I have a lot from the CSA.

I thought I had taken too many liberties on the traditional greens pie to qualify as hortopita. Now I see that using the greens you have is just fine—we don’t often get spinach in our summer CSA share.

For simplicity, I also use what is apparently known as a village-style pie crust. Often I will use Trader Joe’s frozen pie crust as a shortcut (close enough for me) because washing, blanching, and chopping all those fresh greens is a project. I use blanching because then I can get all the greens to an even level of tenderness.

A combo of kale and chard greens is especially good. An all-chard pie is really delightful. If I have just-harvested beet greens and/or radish greens (peppery!) in they go. I chop and sauté the chard stems thinly with a sliced onion. Kale stems? Too tough.

Some amendments I make in my BLD pie might be non-traditional for hortopita? Often I will pit and roughly chop kalamata or oil-cured black olives to add umami to the greens mixture. If I have sweet red pepper or even a mild chili pepper I like to chop and sauté that along with the onion (or leek) that will flavor the greens. Chopped and sautéed garlic scape is nice too.

Thanks for that link - excellent read and info.

A lot of Greeks, Turks, Balkans, Middle Eastern people use any greens they can find for greens pies.

Sometimes you’ll see families (esp recent immigrants) picking purslane or dandelions in open fields or parks. I’ m too anxious about spray, and I grow lots of greens, anyways.

You should squeeze out as much liquid as possible. My cousin and I disagree on the following approach, that is my friend’s mom’s approach to avoid sogginess- add rice.
Something like this recipe

My issue with frozen is that the egg and feta can’t get between the leaves of spinach. It’ll be a slightly slimier mouthfeel with frozen spinach, but many ppl are used to that, and some ppl like that. I would just buy good frozen burek or frozen spanakopita (at Greek stores, at TJ’s, at Canada’s Farm Boy, at Cdn Costco - some good frozen ones are imported from Greece, Macedonia and Bulgaria, my local Polish store also carries them) , rather than make a good burek or spanakopita with frozen spinach.

I only use frozen spinach for one thing: Knorr Spinach dip in a bread bowl. 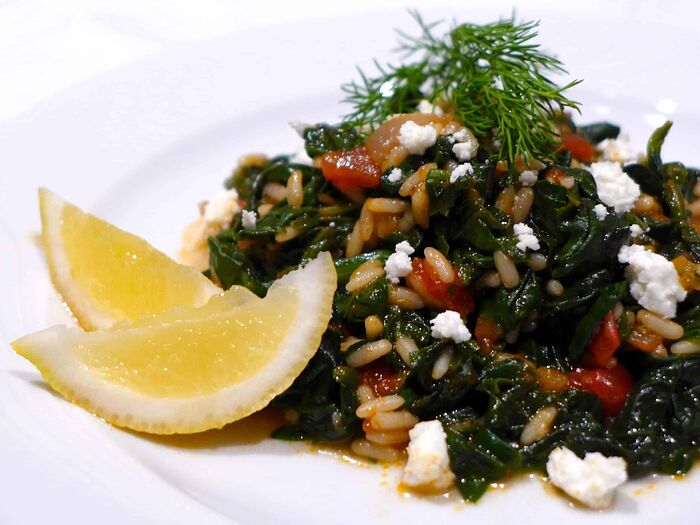 Discover this super healthy and delicious traditional Greek spinach and rice recipe! Spanakorizo is a classic Greek vegetarian dish packed with abundant amounts of nutrients and best of all? Its super simple and easy to make! Go ahead, give it a...

Me too. Locally grown greens in season are the only ones that have enough flavor and texture for me to use in a greens pie. I do use frozen spinach in soups, quiches, and other dishes where the greens aren’t the main event.

Many people don’t know how much brushing with butter or oil improves an unbaked commercial filo pastry that gets baked at home.

Good one! There’s a frozen tiropita that I buy at our local Greek store. I learned the hard way that it’s not as good if I don’t brush the top with a little olive oil before baking. Now I’m curious what brushing with butter or ghee would do.

I’ve also made filo pies with other cheeses instead of feta. I made a leek and chevre pie that turned out very well. I have started using whatever cheese I have in the fridge, rather than keeping feta on hand. 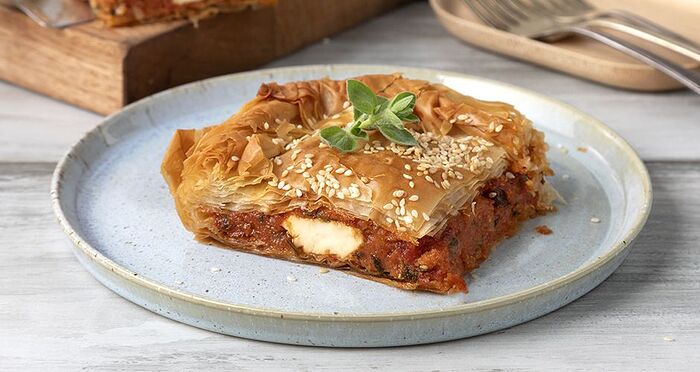 Tomato pie with feta by the Greek chef Akis Petretzikis. An easy recipe for this traditional delicacy with phyllo and a juicy tomato filling!

Using halloumi might get me to make that Southern tomato pie at last. Sometimes mixing ingredients from different cuisines works great! Yum.