I went to dinner at Great Gold recently, a red sauce Italian restaurant in the former Foxsister space, run by the same people behind Foxsister, which was a Korean restaurant that had the audacity to charge $8 for banchan. They kept the interior pretty much the same.

I started with the tomato bread with added anchovy ($7 + $1 for the anchovy). This was very good. A big thick hunk of focaccia-like bread topped with tomato sauce, sliced garlic, olive oil, and salty pieces of anchovy. 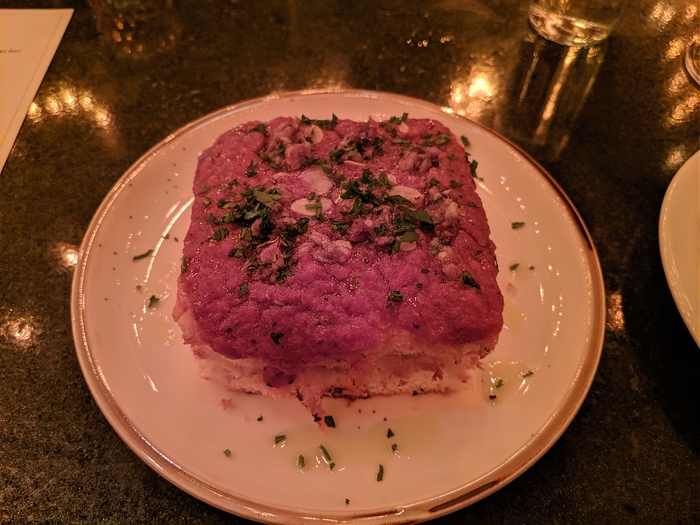 Next I had the chicken parmesan ($22), which was good. A big dinner plate sized piece of white meat chicken, breaded and fried crispy and topped with mozzarella, tomato sauce, and basil. The tomato sauce was on top of the chicken piece rather than under it which I guess keeps the bottom from getting too soggy. Would have like a tad bit more parm in the chicken parm, but overall was good. The chicken was tender for white meat. 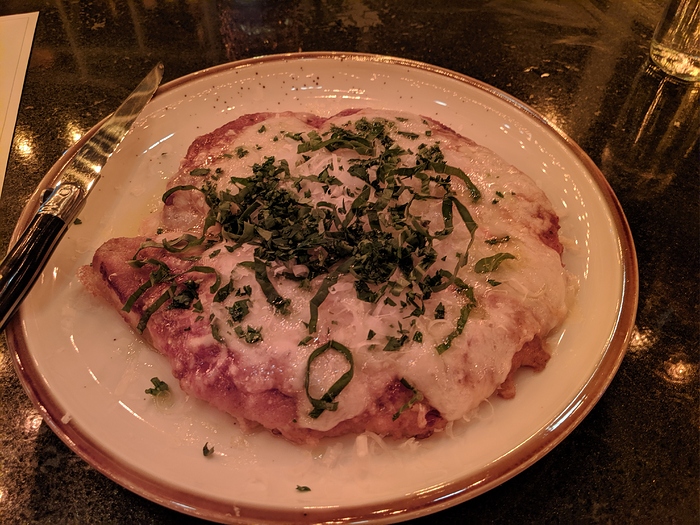 Also had a glass of their house red ($10) which was on tap and was served a little too cold.

I think I like Great Gold (anyone know what the name stands for?) better than its predecessor. There aren’t many red sauce Italian places in the Mission that I know of other than the venerable La Traviata on Mission Street nearby. 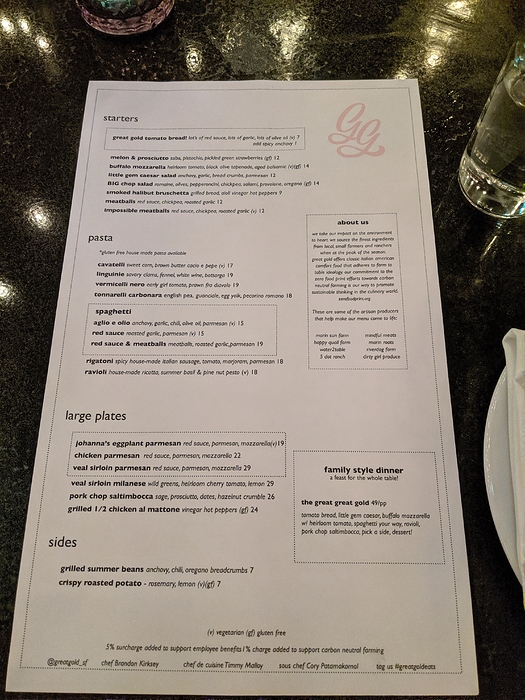 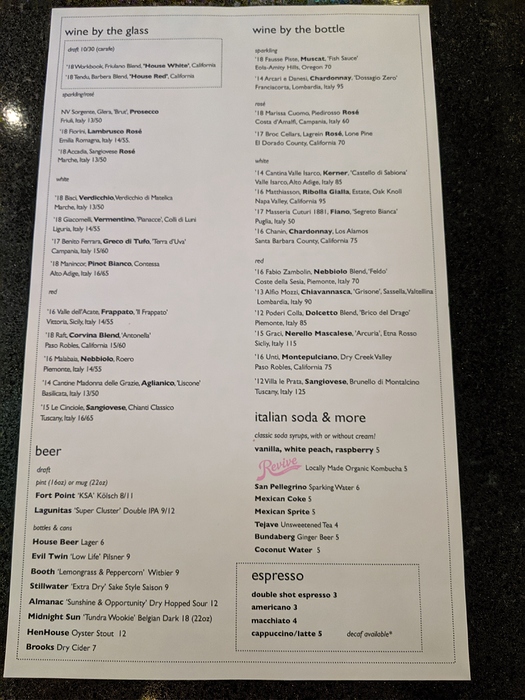 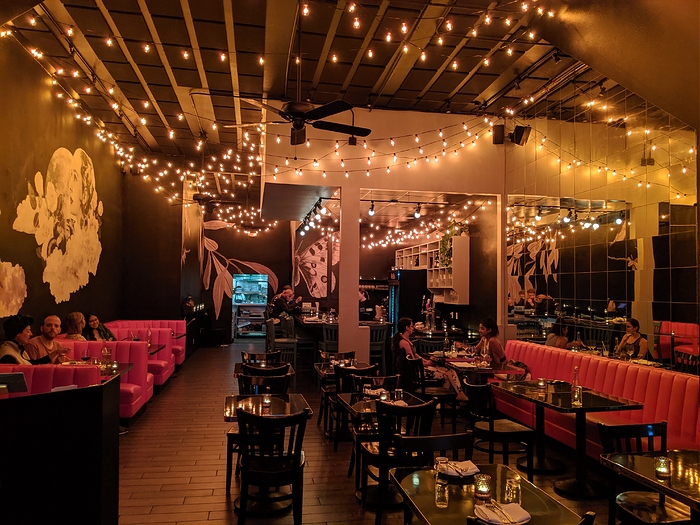 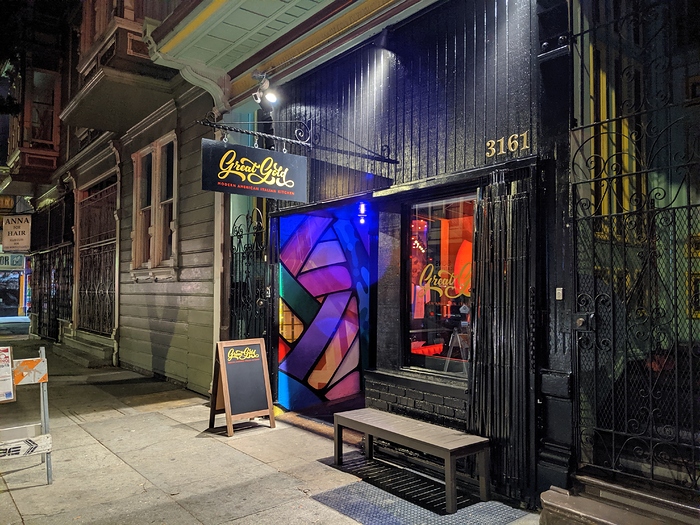 can’t wait to try this place. 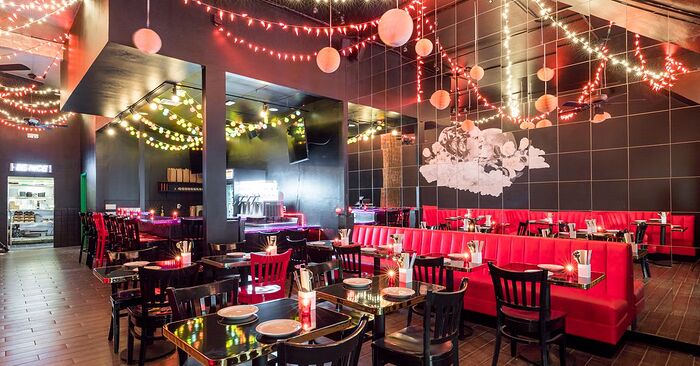 Great Gold will replace Foxsister on 24th Street this Friday

Since it’s got such good Italian resto heritage, it has to be better than Foxsister. Although I did like some items at Foxsister.

i wonder how many those group meals feed…

will be reviewing it for Mission Local soon. Thanks for posting about it!

Went here again for dinner on a Sunday. They were quite busy that weekend. I tried to get dinner there on the previous day but they were packed full on Saturday.

Tried some new things this time. I started with the buffalo mozzarella with heirloom tomatoes ($14). This was really good! Extremely ripe and flavorful tomatoes, drizzled with a salty olive tapenade, which gave each bite a lot of umami savoriness, and some balsamic vinegar. I tried to eat each bite of tomato with a little of the milky mozzarella. A simple dish but very good ingredients. 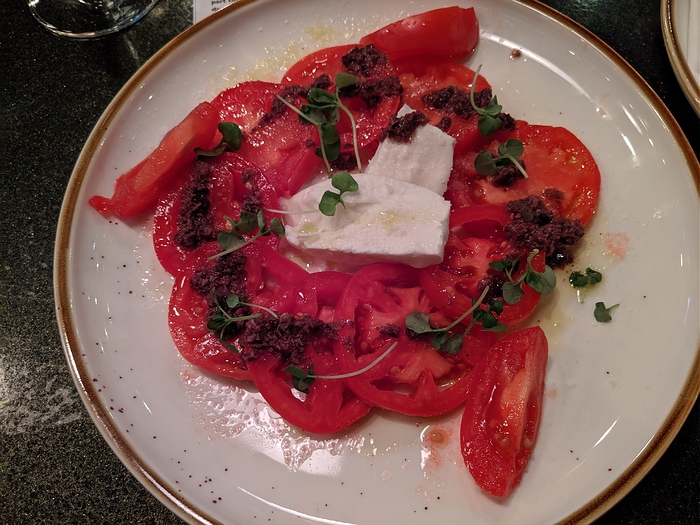 Added a side of grilled summer beans with anchovy, chili, and oregano breadcrumbs ($8). Nicely cooked. Good texture with a savory anchovy sauce and some crunch from the bread crumbs. I didn’t get too much of a grilled flavor from this but it was tasty. 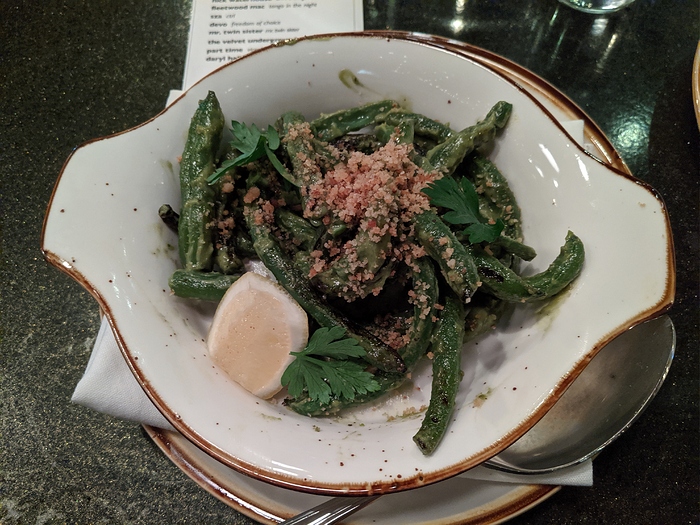 And then I had the spaghetti with red sauce and meatballs ($19). I asked what the meatballs were made of. Chicken and pork fat was the answer. Good chicken meatballs. The pasta was good and al dente. Not super al dente - I think it is freshly made rather than dried. Sauce was simple and tomatoey. I think it could have used a touch more salt even with the copious amount of grated parm on top. 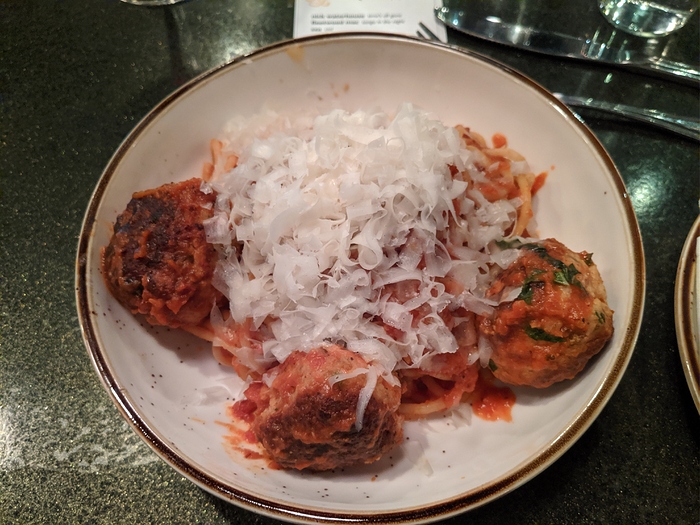 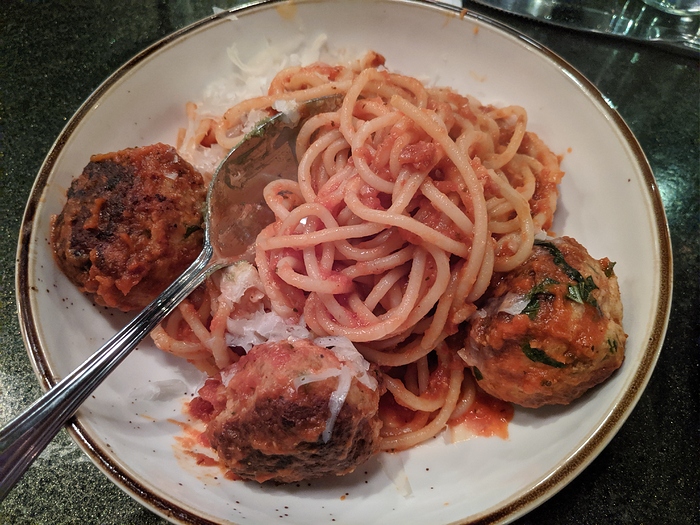 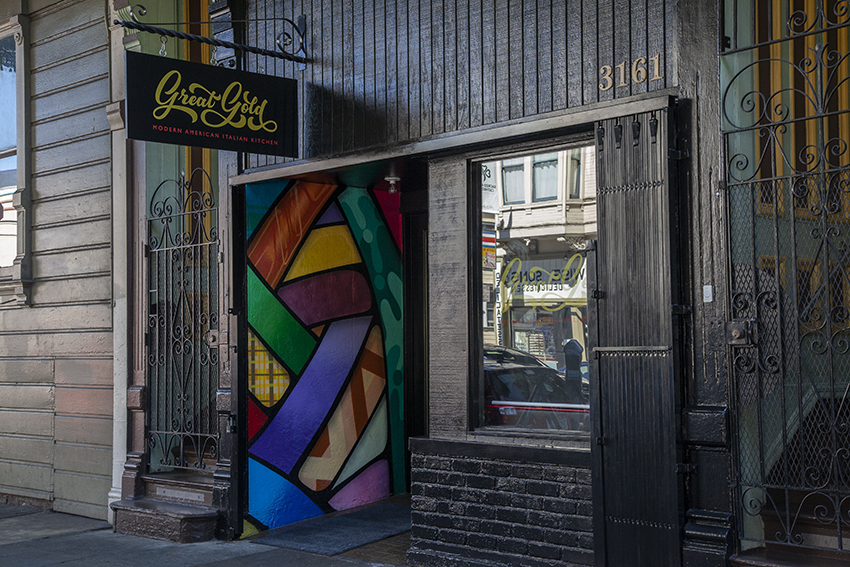 Chef/co-owner Brandon Kirksey told me that “Great Gold,” the name of his newly rewired restaurant (formerly Foxsister, a Korean eatery) refers to the

Oh thank you, forgot I was going to post it here! 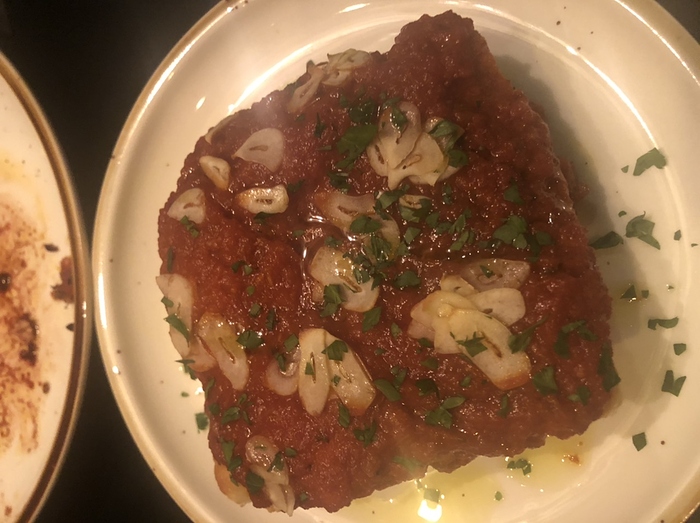 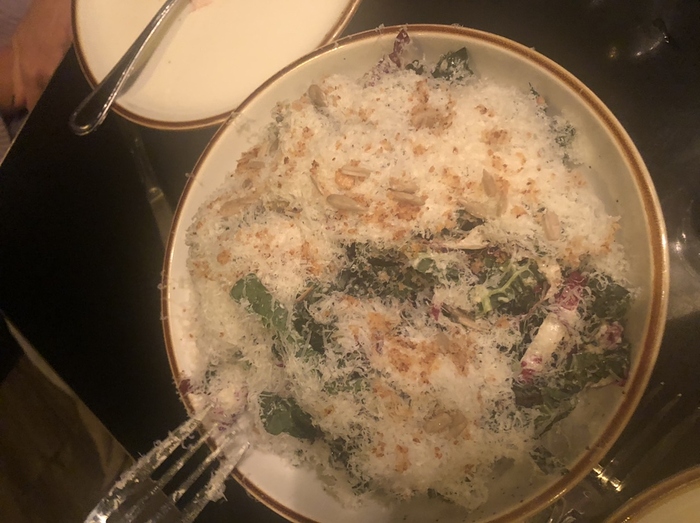 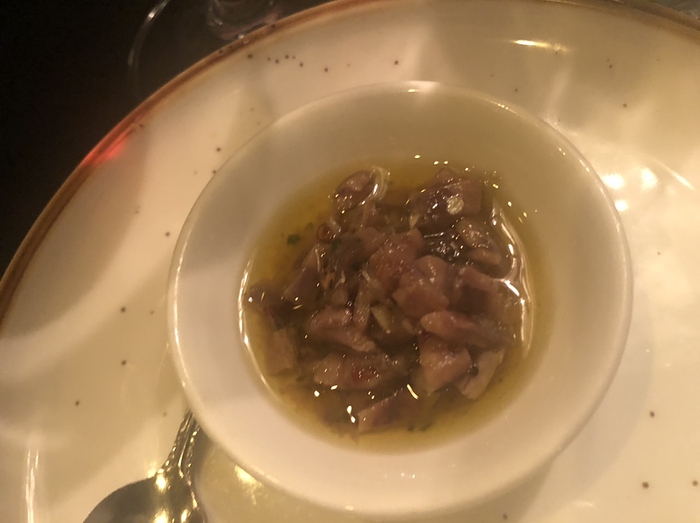 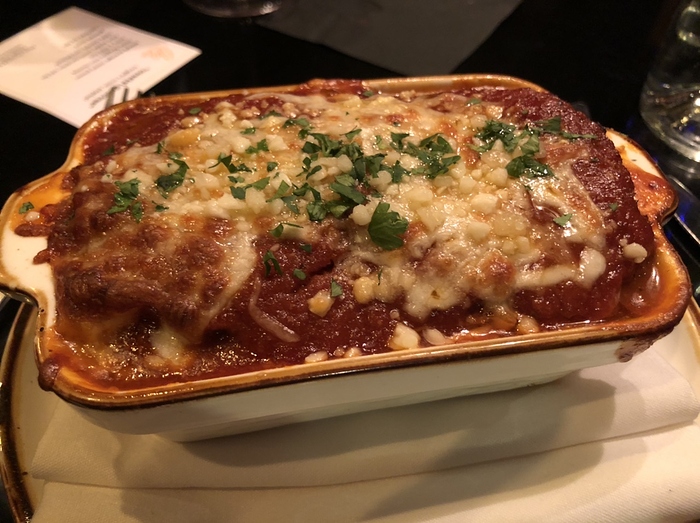 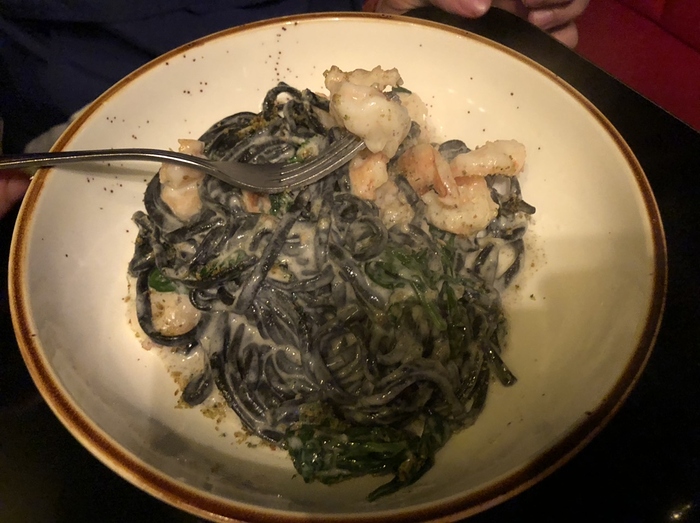 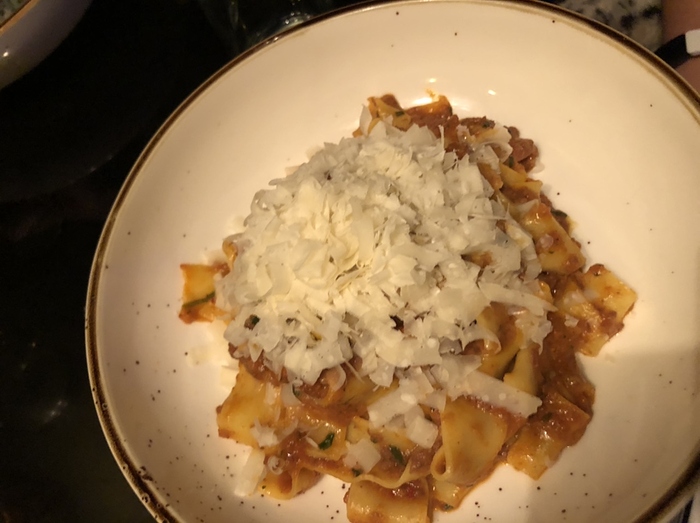 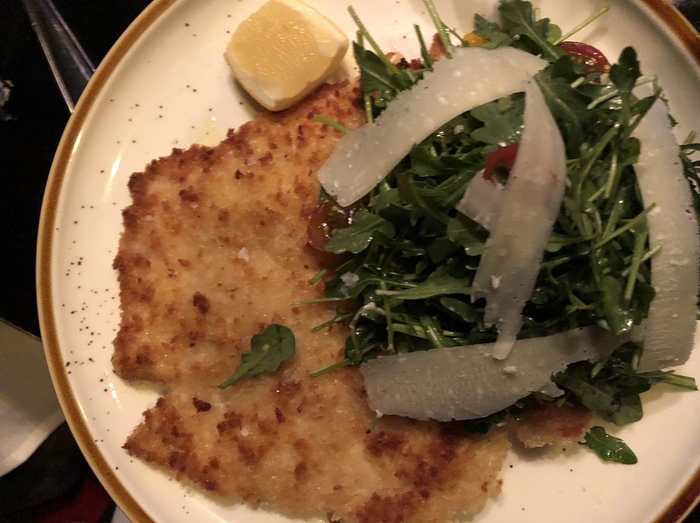 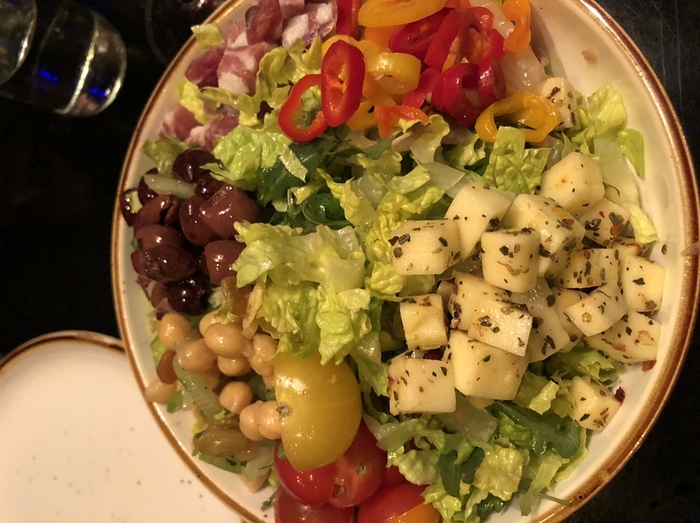 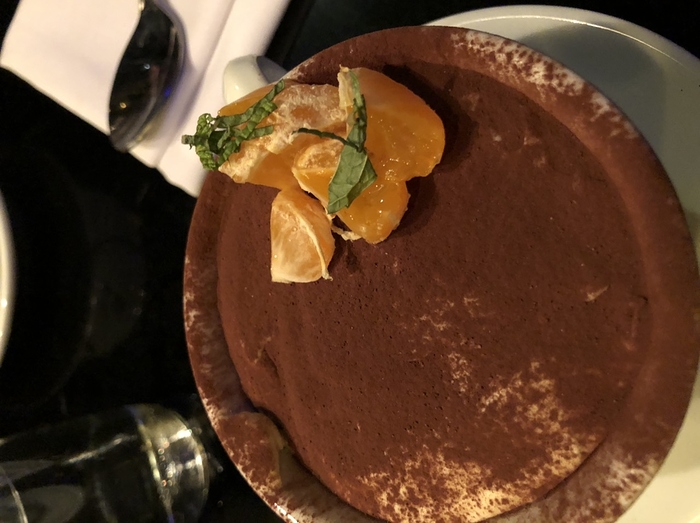 Niece wanted pasta for her birthday so with six of us we got to try a lot of the menu. Tomato bread was good (got spicy anchovies on the side). Eggplant parm was nice but the top should have been broiled a bit more so the cheese fully melted. Kale caesar was good, showered with parm and nice hint of anchovy. Pastas were all fine but nothing really stood out. Chicken Milanese was a basic breaded and fried chicken cutlet that you could whip up at home in 10 minutes. Big chopped salad was good as was the tiramisu. Everything was fine. [Actually the beet and buffalo mozarella and beet salad was very good. ]

I grew up on the East coast so have been to my fair share of red sauce joints and the place seems a little disjointed to me, like they sort of half-assed it. The atmosphere is cold (literally and figuratively), didn’t have the festive sort of overabundance I associate with such places and aside from red booths didn’t jibe with the menu. The pastas are generously sauced, but they don’t serve any bread to mop it up (you can buy a hunk of focaccia for $5 but they forgot to bring it after we ordered it). Nothing was bad but there was nothing about the place that made me think I would want to go back.

I grew up on the East coast so have been to my fair share of red sauce joints and the place seems a little disjointed to me, like they sort of half-assed it. The atmosphere is cold (literally and figuratively), didn’t have the festive sort of overabundance I associate with such places and aside from red booths didn’t jibe with the menu.

That’s pretty much what I disliked about their previous restaurant in this space (there are very few SF restaurants I’ve been actively annoyed at, and that was one of them). They were going for the food and vibe of a soju bang and failed at both - instead of being a fun, comfortable place to drink and eat homey bar food, it instead had me thinking “this whole experience feels like whoever is running the place is feverishly calculating how to squeeze every feasible penny out of customers, and the chef doesn’t seem to understand Korean food half as well as he thinks he does.”

I’m usually all about the food but the vibe was noticeably off. They do solid versions of Italian-American dishes but not serving any bread with this type of food did irk me. I understand restaurants in SF are moving towards charging for bread, but apart from focaccia they didn’t even have bread you could buy.

Do you prefer one over the other?

I’ve been on an Italian-American food kick recently and have went to Original Joe’s in North Beach a few times over the last few months. Originally located in the Tenderloin, Original Joe’s moved to its present location opposite Washington Square park in 2012 four years after a fire closed its original location. I’d never been to the Tenderloin location so can’t say how it compares. I’m guessing the prices were lower. In addition to the North Beach location, the owners also own Joe’s of Westlake…

None of those dishes look particularly good.