This is the third location for this expanding empire. Really close access from Rte 495 so it’s good for the customers from Worchester that he lost when he moved to Woburn. This is a very small place, and it was hard to move amidst the tables. The menu is the same as the other locations and it’s still cash only. When you are at the cash register, the hand pulled noodles are being pulled and slammed into the board about two feet away. I skipped the noodles today and went with another favorite of mine, the #10 Hot Sour Dumpling Soup ($8.87), and this actually comes out to $9.50 after all taxes. The soup is delicious and is both hot and sour. The broth itself is really excellent with a very complex flavor. They really don’t skimp on the amount of pork and chives dumplings that you get. The dumplings are also excellent. 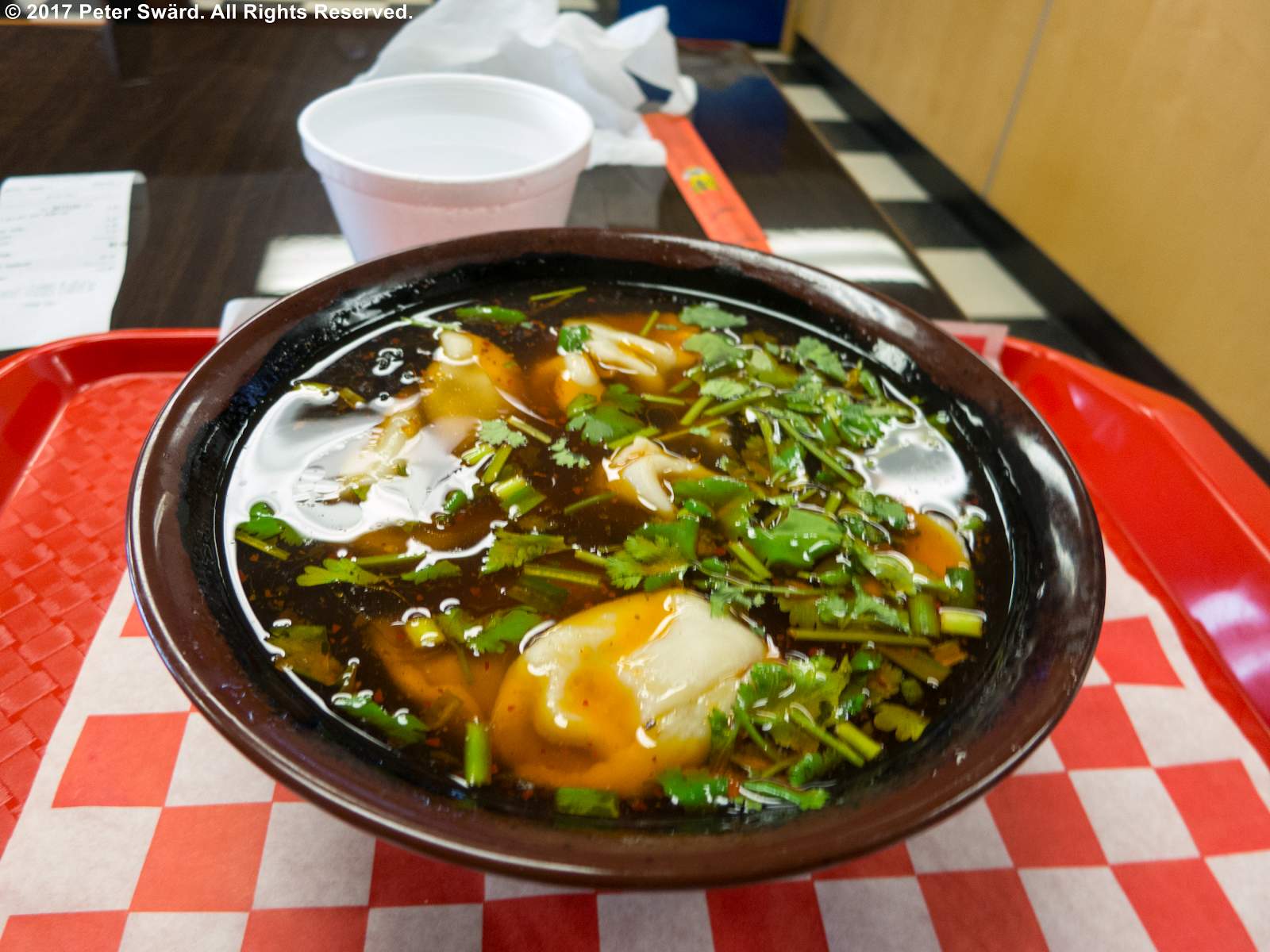 Had my first (but definitely not last!) lunch at the Woburn location today. A friend and I shared the #10 shown above and the #16 together with a couple of lamb skewers – everything was wonderful. The lamb skewers had just the right amount of fat and spice and we inhaled them while waiting for the bowls of soup to cool a bit.

Finally tried the #10 hot and sour soup
after seeing your photo. That is one cravable bowl of soup! The dumplings were so tender that the dish brought to mind tortellini en brodo (a completely different thing, of course).

We got two orders of soup to go but the one was enough for us, since it’s a generous quart-size takeout serving. Added a lamb skewer or two on the side, which was meatier than we remembered before Gene’s opened in Westford. (We had only been to the original location that’s no longer there.) I’m predicting a lot more #10 in my life.

Had my first (but definitely not last!) lunch at the Woburn location today

I went here for the first time the other day too. I had the #4, hand pulled noodles and got one of the lamb sandwiches too. Fantastic lunch. Since it’s sort of on the way back to Medford from Burlington after doing the H-Mart/Market basket double, I feel like there’s more of this in my future, too.

I also bought a handmade calzone at Marco’s across the street to reheat for dinner, and it was really solid. A good little old school Italian joint.

I need to try out Zaika Indian bistro and the Indian bakery right nearby here too.

on the way back to Medford from Burlington

This must be some sort of wishful-thinking food-fueled geography. No wait, it’s alternative geography! I admit, I looked it up on a map thinking “huh, maybe it’s on my way to Somerville, too” but it appears that it is actually in the opposite direction unless I’m missing something?

on the way back to Medford from Burlington

it appears that it is actually in the opposite direction unless I’m missing something?

I think you’re missing something. Woburn is between Rte. 3 (Burlington, where you can also find the fifth outpost of Sichuan Gourmet, across the street from Wegmans) and 93. You can take 93 to Medford, Malden, Somerville, Everett, Cambridge…

What you probably missed is the reference to the Woburn location.

This must be some sort of wishful-thinking food-fueled geography.

heh. Woburn is really more of a bit of a side trip than on the way back to Medford, I guess, but it’s close enough to make it easy.

Yes- I was going by Westford as listed in the thread heading. Thanks for clarifying!

Now that we have ordered the #10 dumpling soup a few times, I can attest that it contains a very generous serving of dumplings every time. Never less than 12 dumplings so far. The deliciousness and the value are hard to outdo.

We always get the #10 for takeout and receive a quart-sized container. The two of us split the dish at home for a light dinner of dumplings in hot and sour broth. If we aren’t eating the soup immediately, I open the container and let the contents cool before refrigerating. Yum, especially on a hectic weeknight when it’s late and we want something tasty right away.

We always get the #10 for takeout and receive a quart-sized container. The two of us split the dish at home for a light dinner of dumplings in hot and sour broth.

I can’t imagine living through the night on only half a container of that. It’s generous, but I could easily eat a gallon.

Well, the #10 is that delicious. Now if I had a gallon of that dish in front of me…let’s just say I would be in my happy place.

Had lunch at the tiny, busy Boston location last weekend. #16 (hot sour hand pulled noodle soup) was terrific and a ton of food. I was tucked behind a table of 3 plainclothes BPD cops, only one of whom had eaten there before but all of whom agreed it needed to go into the regular rotation. A bit weird being jammed in about 12 inches from their guns. The shop was busy throughout but somehow everyone got a place to sit right about when their food came up.

The shop was busy throughout but somehow everyone got a place to sit right about when their food came up.

I often say that medium-to-high end joints that can’t get their shit together in terms of timing could learn a lot from high-volume Asian places. At those places, even with limited kitchen staff, there rarely seems to be any timing issues. On the contrary, it’s more like “oh no, the next dish?!”

Pleasantly surprised to find vegetables added to my container of Gene’s #10 hot and sour dumpling soup when I heated a bowl for tonight’s dinner. Normally there’s only been cilantro, as shown in @Ferrari328’s photo at the start of this thread.

Not sure whether the added vegetables were a one-time fluke in the #10. With or without the added veg, this is a satisfying soup for a chilly day. 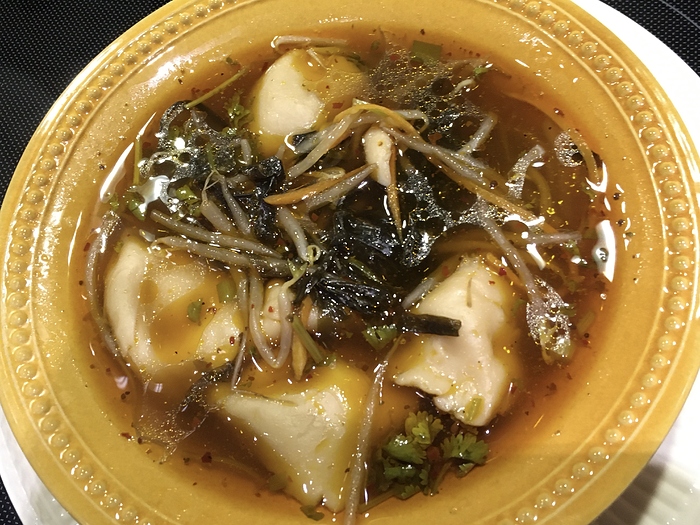 Noticed the same thing last week from the Woburn location when the weather called for exactly that soup. I think it’s a (relatively) recent change and agreed that it improves something that was already a great warm-up.

Thanks for sharing your observation. Now that the weather increasingly calls for a #10 dumpling soup fix, I’ll try to remember to post whether the added vegetables are appearing on the regular.

There were vegetables in the #10 dumpling soup in Woburn today. Nice although a bit more carrot than I would have liked and not enough cilantro. Very tasty as always. 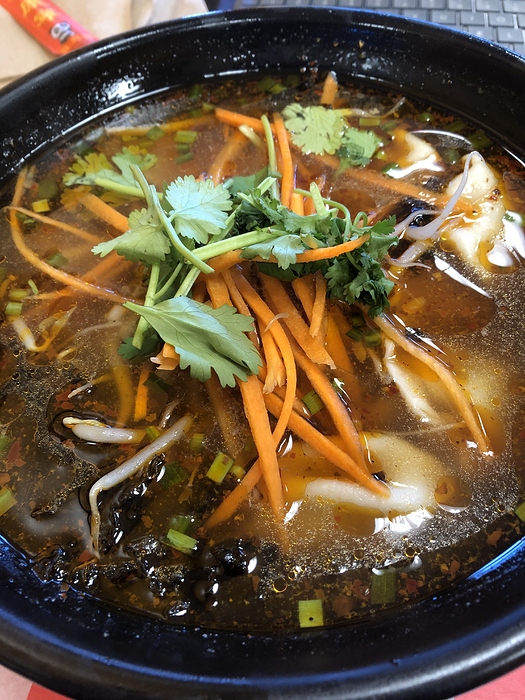 Missing Gene’s Flatbread in Boston’s Chinatown is one of my regrets from our last trip.