Thanks for all your information on this subject @Barca, very enlightening.

In our experience in Greece, the feta did indeed vary place to place. The best feta I tasted was on Rhodes, absolutely sublime.

However, and this was 30 years ago, all the yogurt we ate was most definitely sheep’s milk, on the islands, Peloponessia, Athens area, and north to Meteora. It may well be quite different now.

I’ve always wanted to enjoy the yogurt I loved in Greece, as nothing I’ve found in US comes near. But, happily I found a dairy about 80 miles away that sells sheep’s milk. So, once I make the trek, I’ll be making my own, hopefully authentic Greek style yogurt.

Haven’t had much experience with Spanish ham, but have been thinking about buying some from Costco, as I think they sell a couple of different kinds.

I noticed recently that the larger importers of non-Greek “feta” in the USA are calling it “white cheese”, as in “Bulgarian white cheese”. Domestic producers are still calling it feta, though.

Interesting @ernie_in_berkeley, have never seen or noticed that.

Krinos is one of the importers. If you go to https://www.krinos.com/feta and click on any of the flags other than Greek and USA, you’ll see the packages of white cheese.

ETA: I see that the cheese from France is also labelled feta.

Yep, and the French feta is very good @ernie_in_berkeley.

Another very interesting point, these articles are all written in English.

I looked on google.es and I do not see any articles on the topic in Spanish !

So, this is questionable !

2 Guys relocate to usa and start a farm ! So did José Andrés 20 years ago !

It is, but it’s surprising that the French version is called feta, since France is a stickler about AOC rules. They complain about American “brie” and “camembert”, for example.

Very true @ernie_in_berkeley, and they’re sticklers about their language also.

I’m pretty sure there will be a distinct taste difference between Acorn finished Iberian Ham & Peanut finished ham from Texas & Georgia.

The pigs are likely to have accents as well.

Another very interesting point, these articles are all written in English.

I looked on google.es and I do not see any articles on the topic in Spanish !

Where are you located? Some websites use location information from your IP address and choose languages accordingly.

And the French complaining about the use of brie or camembert is eyebrow-raising,since neither of those terms is in and of itself an AOC designation, even in France, and both require a place name before it can be an AOC.

There are just two AOC bries (Brie de Meaux and Brie de Melun) , although there are 7 distinct bries. (I was lucky enough to live in the Brie region between Meaux and Melun before my dairy intolerance showed up so I sampled it all!) Oh yes… Coulommiers is considered a brie, but it carries it’s own AOC, so the word brie is not used.)

I’m a big proponent of the sanctity of AOC designations…its much the same as copyrights and trademarks.

I dont have an issue with the import of black foot pigs…just dont call it iberico or belote, because it’s not.

(And the feta naming drives me bonkers…the aforementioned dairy issue means I can’t eat cow feta,but sheep feta is no issue…I have to ask everywhere I go where their feta comes from.)

Probably the same people in the article. They call it “Ibericus”. (I call it Ridiculous) 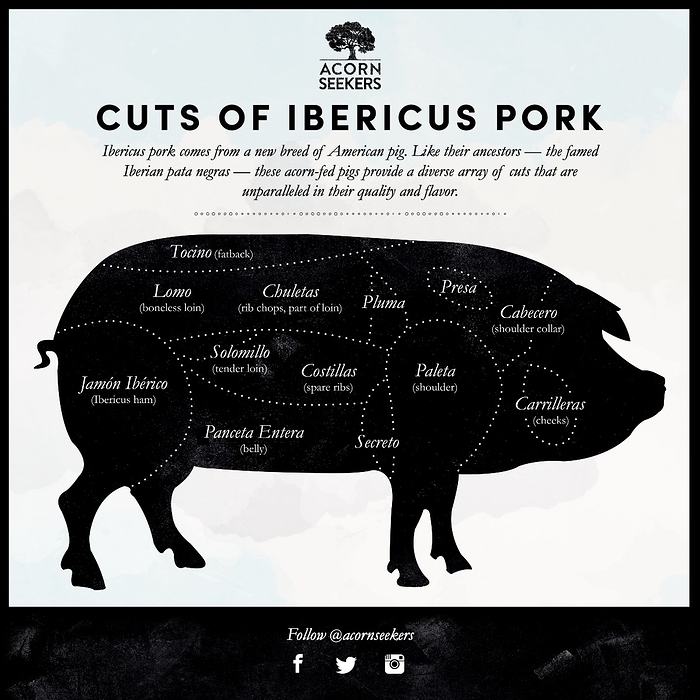 Ibericus Pork Is Here At Last: Which Cut Will You Try First?

Everyone knows what pork is, and many people even know about Iberian pork, a special type of pork that comes from pigs raised on the…

It is, but it’s surprising that the French version is called feta, since France is a stickler about AOC rules.

Everybody is looking for loopholes. After 2007, the EU law rules that feta made outside Greece cannot be called feta. I guess this is only effective in the Euro zone. The company Salakis, famous for making feta here, stop to use the name on the packages and named their product as goat cheese.

Ibericus sounds like a Harry Potter spell where they can turn everybody into a pig.

I am a big fan of Spanish ham, but I would buy similar tasting ham regardless of what you call it so I have no problems if they want to pick a different name just to avoid ruffling feathers. It’s like the sparkling white wine vs champagne thing.

While I generally like Costco for some high-end things, I do remember a thread here that compared the Costco Iberian ham to the real deal Iberian hams available in Spain or imported via an artisanal purveyor. I seem to remember that it was a fairly middling review. If you’re curious to try it, give it a try at a place like La Tienda, which is a Spanish foods specialty store. They’re expensive, but they have smaller portions (ie., you don’t have to buy the $1500 ham leg) available too.

I am Spanish - Catalan … Born and raised in Barcelona.

Nothing in the Spanish newspapers !

And afterall, Chef José Andrés has done same for the last 20 years.
We adore Chef Andrés !

This is false news.

Take a look at Oenologist Marimar Torrés in Sonoma ! She has been making Cava for 35 years more or less in Sonoma.

This is not a problem.

The problem is: This is false news.

This is not a problem.

It would not be the first time American media has made much ado about nothing. Thanks for the local information.

My apologies for not having much useful Spanish. Americans!

@Auspicious, please don’t throw all Americans under the same bus!

Well, American media definitely goes under any bus I can find.

As for foreign language skills, we are poor compared to most of the world. I can manage in three languages and a bit of one more and am an oddity. Perhaps you are also. Americans with language skills, other than first generation immigrants, are few and far between.

Just dropping in to say the article was from the Guardian, an English news entity.

Agree on the media 100%, and on the language, in general. I feel however, you can’t broadly stereotype our extremely diverse country. But of course we do have freedom of speech here, I just find it hurtful, especially in these turbulent times, and a pandemic raging. Think we need to pull together and be proud of our country. We’re far from perfect, as I know you know @Auspicious. I am bilingual, H is too, as an aside. One more point - English IS the international communication regarding aviation - air traffic control language.

Thanks @bbqboy, now we’re into the language wars…not really, just a friendly convo with @Auspicious.