Just stumbled across a recipe for French Onion Soup. Cooked in a Crock Pot.

Recipe called for three pounds of cut onion, with two tablespoons of melted butter and salt & pepper, cooked for 10 hours on low heat setting. (The onions looked marvelous after this step!) Then eight cups of broth, and a quarter cup of Balsamic Vinegar added, and cooked for another six hours, before a short finish with croutons and cheese under the broiler. My first though was, you’d burn the house down keeping a crock pot going for 16 hours. Is this safe?

I think the only things I find strange about that are the inclusion of vinegar, particularly an Italian one. Oh, and the exclusion of wine.

I don’t use a slow cooker so have no idea whether the time is right or not. Takes about an hour using traditional methods.

Oh, and the exclusion of wine.

Yes - I actually use Julia’s recipe with dry vermouth and brandy.

Mine takes about that. Carmelization (sp?) of the onions takes up most of the time.

Probably for fear that the slow cooker may not get hot enough to evaporate the alcohol, leaving the soup with a boozy flavor.

This recipe is stupid, IMO. If you just leave the onions alone for 10 hours, without stirring, you risk uneven cooking. Regardless of how you cook them, once the onions are caramelized and you add the broth, all you need to do is heat it through for maybe 15 minutes, to meld the flavors (and get rid of the alcohol, if using). You CAN cook it longer if you wish, but it’s not necessary. It’s easy to scorch the topping with a broiler - you’ll get a more even browning using a hot oven.

This is one of those times when I just don’t get why a crock pot is involved, esp since it would have to be uncovered to allow the onions to caramelize.

The balsamic seems way too sweet, esp with the onions. I like dry white wine and a splash of brandy then a brief simmer with the beef stock. More like 30 minutes than 6 hours!

there are people who insist they can do cold fusion using a crockpot.
alot of them however have switched to sous vide for cold fusion.

As someone who’s been served crock pot chicken breasts by someone I love, I know the unique pain of eating boneless, skinless chicken breasts that had been thrown frozen into a 6-hour Classico bath.

I do enjoy seeing how “sous vide” has has moved on up from “boil-in-bag.” It’s like seeing your small-town friend transformed into a fancy Hollywood star.

My favorite way to start off onion soup is to bake the sliced onions in the oven for two and a half or even three hours. Only adding some butter at the end. Sort of the same idea but a little drier so that the onions carmelize more. Bonus, I save some in the freezer for other future uses, like to top hamburgers and such in the summertime.

Thanks all, for your replies. I make a lot of different soups on our stovetop. Never attempted onion soup so when I found this recipe it intrigued me. Based on your comments here, won’t be trying this.

I think Ina Garten has recommended your method for roasting red onion slices. In her case, they were for a salad but she too said to save them for hamburgers, etc.

But this made me remember ATK’s onion soup technique: Start the onions in a heavy Dutch oven on the stovetop but have the bulk of the caramelization time happen in a low oven. I’ve never done it because I can’t lug a heavy pot in and out of the oven a few times. But it does seem to create a fantastic amount of deeply browned fond to deglaze in addition to properly caramelized onions that you don’t risk burning.

Thanks all, for your replies. I make a lot of different soups on our stovetop. Never attempted onion soup so when I found this recipe it intrigued me. Based on your comments here, won’t be trying this.

Or try it and report back how it goes. It isn’t a method that I would think produces a good final result (at least intuitively it seems like the wrong tool for the wrong job). But we’ve all been wrong before . . . it is only onions after all.

If I had a slow cooker I’d give it a shot. I might bail on the process if after caramelizing the onions (or not having them caramelize) it didn’t seem right. You could still use those onions in another casserole type dish I would think. … . . or mix with cream cheese/garlic/spices and make a tasty dip.

Here’s a visual from the last batch I made 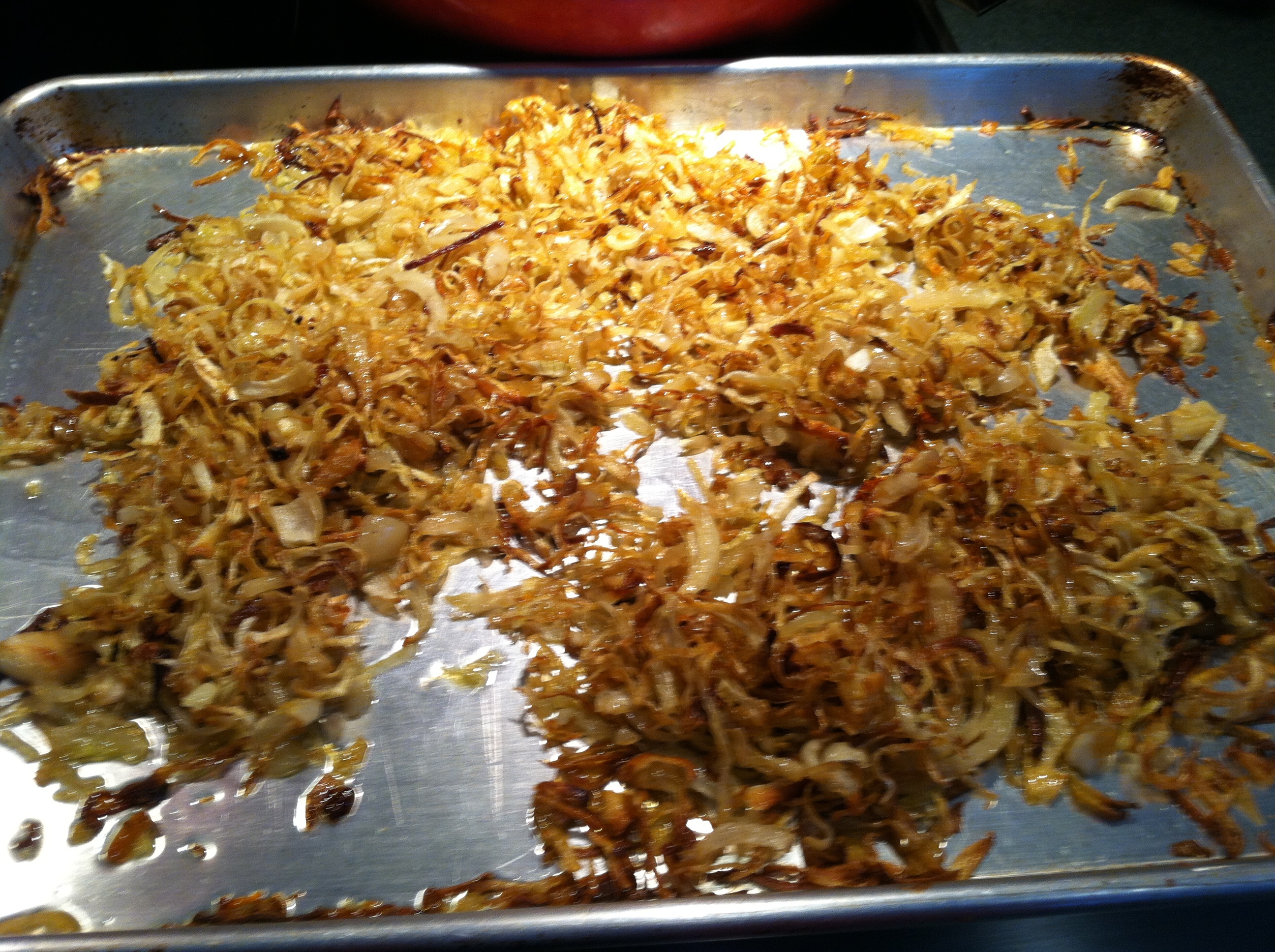 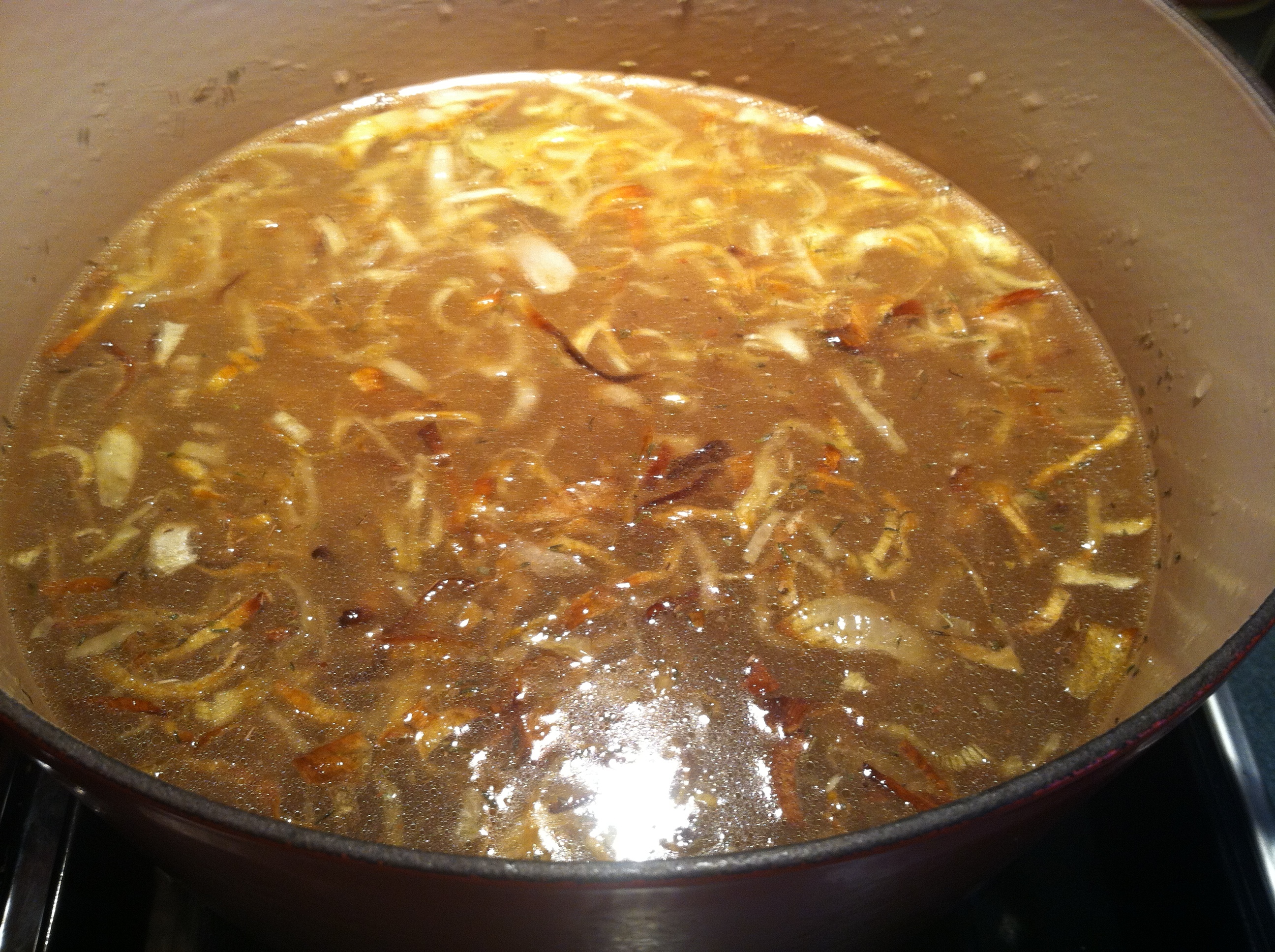 In fact onions caramelize well in a covered pan. Sliced onions and a pinch of salt over a very low heat. Cover and cook for about 2 hours. Stir every 20 minutes or so and add a tiny splash of water if needed. No fat/oil required. This comes from a modern Brit. chef, Gary Rhodes.

I’ll try to do this over Easter, and post pictures.

Thanks, and not really much work at all. Just a bit of time, which on a snowy day I have plenty of

Hi, RedJim,
You’re talking my language… almost. Our favorite, go-to French Onion Soup is a crock pot recipe that we have adapted from a Mable Hoffman recipe in her “Crockery Cookery” book from mid-1970s. The recipe starts from a base of 3 large onions, and the total crock pot time is 4+1/2 to 6+1/2 hours. The first part of the process, for us, is onions in a skillet, not the crock. “In a large skillet, cook thinly sliced onions (rings intact) in 1/2 Cup butter until lightly browned…” So the crock timing starts after many minutes of getting the onions browned just right.
Several folks on this thread thought a crock pot approach was a little weird, and I can’t blame them when you lay out a 10 hour plus 6 hour endurance formula! But at our house, we would not trade this crock pot recipe for any of the other more “standard” we have tried (many, at home and at restaurants).
BTW, our recipe does not have any wine, but does enlist beef bouillon cubes and Worcestershire sauce. Our cheese is swiss- lots of swiss, laying on top of the liquid in the last 1/2 hour of cooking. More cheese (cold) waiting, on top of warm, toasted French bread slice in each bowl (no croutons). Ladling in the hot and cheesy Onion Soup melts that part of the cheese, nicely. No broiler step in this recipe. But we have come to crave it!

IIRC – and I may not be – onions that are cooked/braised in a liquid (in this case, their own water) develop a deeper flavor that enhances beefy flavors than those cooked via a dryer method, like roasting uncovered in an oven. If this is so, I think I’ll stick with the method where the onions basically poach slowly in their own copious water in a partially covered pot before caramelizing into a dark brown gooey mess.

Of course, I may be off on the science.

There’s no such thing as a bad caramelized onion. No matter how it gets there!