When prepping dishes that will be frozen and then cooked/served later, are there general guidelines on whether to cook the dish first, then let cool before freezing or is it best to par-bake or freeze assembled but uncooked?

I am looking at making and freezing an enchilada casserole, a shepherd’s/cottage pie (with a mashed potato/cauliflower topping), and some savory hand pies.

My gut says to assemble, fully bake, then cool and freeze, so the dishes can be pulled out and simply reheated.

But, I’m now wondering if that process severely affects the finished product - if it’s better to freeze the assembled dish uncooked and angle for a longer cooking time when going to serve.

We usually freeze cooked. Or, at least, mostly cooked - bearing in mind that it cooks more when you heat it up. It’s a while since we’ve made shepherds pie just for freezer but I have it in mind we froze it without the topping - adding that when we heated it up.

For me it depends. Shepherd’s pie I freeze without the topping as John says and make the topping fresh for serving because I don’t think mashed potatoes or cauliflower freeze well. Enchiladas I would probably bake, cool and freeze but plan to add (more) cheese to the top for reheating. Savory hand pies I would tend to freeze unbaked and add baking time. Will be interested in hearing what other folks do.

we froze it without the topping - adding that when we heated it up.

Harters took the words right out of my mouth. I wouldn’t freeze it with the potato topping, I would add that when you are going to be ready to re-heat / eat it.

Mashed potato do not fare well when frozen. They become grainy and the texture and flavor are disgusting. I echo the others regarding the topping.

I would be inclined to freeze the enchiladas separately from the sauce. I think the tortilla would not hold up to the defrosting.

The Cooperative Extension Service has some good free info. This publication is a handy starting point.

Are there still any of those businesses where you go and put together meals for your freezer using their ingredients/containers? Years ago I stole many freezer meal ideas from studying their monthly offerings. Most of their offerings boiled down to animal protein + a non-cream sauce to help keep it from drying out. Ex: chicken parmesan, veal marsala, etc.

I tend to freeze non-cream soups, stews minus potatoes, cooked meats with sauce & dumplings. For something like lasagna I make double my meat sauce and freeze it. Then most of the time/work has been done and the other ingredients/assembly are pretty quick.

I would look at a commercially frozen savory pie at the grocery. Istr the cooking directions seemed similar to those you would follow if making the item from scratch. If so, I would try freezing the hand pie uncooked. I would later cook it without defrosting.

I have made both enchiladas and hand pies (more like calzones) that i fully cooked, cooled, portioned into meals, then double wrapped for the freezer.
I do a lot of freezer cooking for my parents and previous dishes they loved so much they asked for again have included spinach lasagna roll ups, tamale pie, calzones, eggy vegetable patties (kind of like pajeon), as well as various stews and soups

They’re probably fine either way.
I had a few instances cooking frozen casserole style dishes that were just assembled then frozen vs baked then frozen and they took for-ev-ever to bake all the way and in the meantime the tops and edges were overcooked and dry (very possible i was using the wrong temp) so now for about anything i cook then freeze to reduce oven time from frozen. Oh, and i also take anything large like a 9x13 casserole and make smaller portions before freezing so it reheats faster too.

I had to Google to discover what a hand pie is. It’s not a term used in the UK but, looking at photos, it seems to be what we’d call a pasty, usually made as a savoury with shortcrust pastry. I make pasties regularly. The recipe makes four - two for eating now, two for freezing. I freeze them cooked, defrosting them and reheating from chilled for 20 minutes at 180. I can’t detect a quality difference between the fresh and the frozen.

Yup, what you call pasties, we call hand pies. There’s a tremendous hand pie shop in South Portland Maine (Little Bigs). We buy their pies (fully cooked and cooled), and freeze them for re-heating later. They hold up very well to both the freezing and the reheating. I also make black bean oven burritos, and make 4 at a time, two for dinner, and two lunches. The tortillas handle the freezing well, even with the sauce (which in my case is just salsa).

what we’d call a pasty

The small town where I grew up had a tiny breakfast/lunch place that specialized in Cornish pasty. The family had ended up in the area during the Gold Rush and had made money cooking for the miners in the area. When the miners moved on to the next strike, the family stayed in the area and passed down the recipes.

I make a couple of different pasty/hand pies, all veg-based, that are handy to have around. I do one with a chicken (vegan) pot pie filling, one that’s closer to a shepherd’s/cottage pie, and one that’s a variation on chili con carne with corn in the filling and a bit of cornmeal in the crust.

he family stayed in the area and passed down the recipes.

One of my Google results mentioned its popularity in a couple of specific parts of America, citing immigration from Cornwall. I wonder if the top crimped Devon pasty made it across the Atlantic (I’m a top crimper myself).

By way of culture swap, Teeside (in the north east of England) can thank an American immigrant for its regional delicacy - the Chicken Parmo. https://en.wikipedia.org/wiki/Parmo

We have empanadas where I live. It sounds similar to the hand pies. The best ones are filled with a ground beef mixture with green olives and potatoes.

I had heard of the Cornish pasty; I think they’re a regional specialty in parts of the Upper Peninsula (Michigan), where there are iron mines in the western part of the peninsula.

Empanadas are extremely common here due the the South American immigrant communities; I think they’re common in virtually every SA country in one form or another. And they are readily available in the freezer section of grocery stores.

Then there are Jamaican (and Nigerian) patties.

Pies like that with sweet fillings are called fried pies and are also very popular, found in grocery stores along with the Ding Dongs, Ho Hos, etc. I always thought the term was meant to include those with savory fillings even though those are much less common and mostly freshly made.

Empanadas can typically be either fried or baked and come with savory and dessert fillings.

@ElsieDee - sorry, I’ve never made any to eat fresh or freeze so I can’t speak to your questions. They’re so widely available I just pop into a shop and buy several and I’m on my way.

What happened to those make and take places? That came in really handy when I wanted to fill the freezer for our dog sitter before we went on vacation.

There are also Australian and New Zealand meat pies (I’ve also come across veg versions) that look close to what I think of as a pot pie (ala Marie Callendar’s): 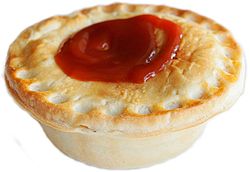 An Australian or New Zealand meat pie is a hand-sized meat pie containing diced or minced meat and gravy, sometimes with onion, mushrooms, or cheese and often consumed as a takeaway food snack. The meat pie is considered iconic in Australia and New Zealand. It was described by former New South Wales Premier Bob Carr in 2003 as Australia's "national dish". New Zealanders regard the meat pie as a part of New Zealand cuisine, and it forms part of the New Zealand national identity. The Victorian...

Oooh, there’s this fantastic spot called “empanada mama” that has a bunch of different empanadas, most are fried but they have a few that are baked (don’t get those), they have probably 8+ different options most days (but sadly the vegetarian options are slim and uninspired)

Those jamaican patties are everywhere in nyc! Bodegas, bagel shops, street vendors, in the freezer section of grocery stores… and for reasons I don’t understand also at about every pizza shop. Even if they sell calzones and stromboli, there’s always a tray of those jamaican patties too. Never found a vegetarian one to try myself.

Every country seems to have one. In Jamaica they’re called “patties”’, in Italy, “calzones”, the Israelis call them “bourekas”. South Americans and Filipinos call them “empanadas”.
In DC, there is a carry out empanada place at Adam’s Morgan called Julia’s. They sell many kinds of empanadas based on the country of origin. They are freshly baked . They also have vegetarian as well as spinach with different kind of cheese. My favorites are the chilean and jamaican. I know they have expanded and have seen them in another location in DC,