is Turkish sumac unsuitable to even be tried in the same recipes as other sumac?

Too late; I already tried it, but now I’m not sure if it was suitable. JK. I did the same with Bay leaf so I’m sure I can adjust.

Meaning the result was not right, or meaning you haven’t found out yet?

Meaning whatever. Like that young lady said in "Clueless ". My result was good, even if not right, and I will continue to explore.

ETA. I’m going to check out a “lemon/lime flavoured smoked paprika”, as I eagerly checked out the California vs Turkish bay leaf story. Just not tonight.

That “whatever” is not just any “whatever”, it’s the veritable summation of an entire culture.

She was So Cal, but still hella cool.

Bay leaves are (not?) optional -There’s Turkish bay leaf and there’s California bay leaf. I know that you have very strong feelings about them. How do they compare?

Still researching The Anacardiaceae , commonly known as the cashew family or sumac family, are a family of flowering plants, including about 83 genera with about 860 known species. Members of the Anacardiaceae bear fruits that are drupes and in some cases produce urushiol, an irritant
Cooksillustrated.com/how_tos/5425-bay-leaves.

I remember I didn’t love them as a child, and I’m not sure when it happened,
but I love cashews now.

About bay leaves. “… a shrubby evergreen tree, a different species altogether from the bay, or laurel, tree that produces Turkish bay leaves and grows throughout the Mediterranean. California bay leaves have a potent, eucalyptus-like flavor, whereas Turkish bay”

“The aromatic molecules in most herbs are more volatile than water. Herbs that grow in hot, arid environments—like bay leaves—are different: Their aromatic molecules are less volatile, retaining flavor even after water evaporates. Similarly, in long-cooked applications, we’ve found that rosemary, thyme, oregano, sage, and other herbs native to hot, arid environments do as well as their fresh counterparts. (And bay leaves are used only in long-cooked recipes.) Since they are cheaper and keep for months in the freezer, we’ll continue to use dried bay leaves (about 10 cents per leaf), instead of springing for fresh, which cost twice as much.”

Wanting to know if Sumak and Sumac are a different species.

I may have committed a faux pas

, but I just visited the Sumac article on Wikipedia.

This would mean that if “sumak” is the Turkish spelling, they will also call the American version “sumak”. There aren’t two names, but there IS more than one type.

Whether this is the whole story, or even accurate, I can’t say for sure.

Thanks for the research! I hope I will continue to enjoy it in spite of any uncertainty. 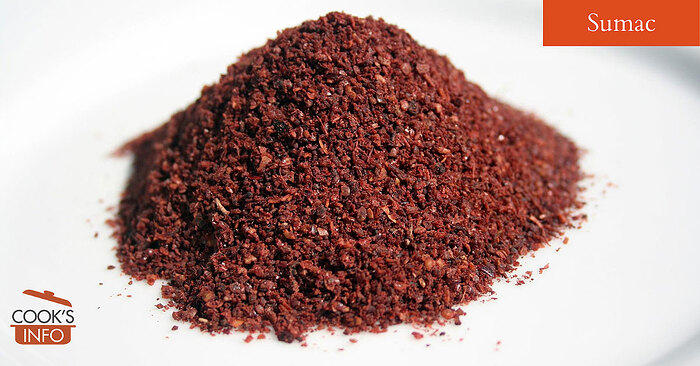 Sumac is a red or purplish-red powdered spice made from the berries of the sumac bush.  It has a tart, lemony taste and smell.

Masterclass-What Is Sumac? Learn How to Use Sumac With Tips and 8 Sumac Recipes

The English translation on the brand website calls it sumac. 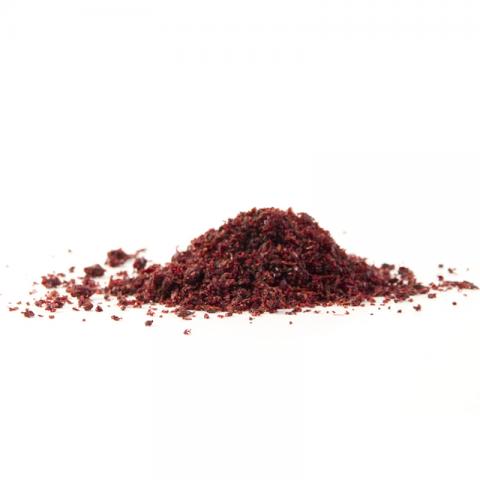 I’m going to add some of these food gifts to my food gifts! I do like thinking of it as “like lemon/lime flavoured smoked paprika.” 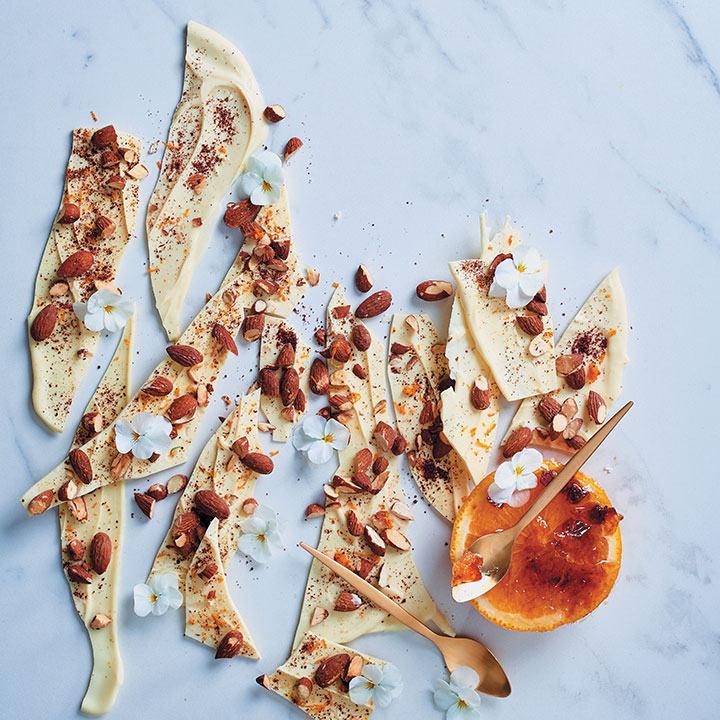 These utterly scrummy white chocolate shards with sumac, orange and salted almonds are the ideal sweet-and-savoury treat to pop in the centre of the dinner table after a rich meal. The delicious flavours make them great for any time of the...

…but maybe with dried apricots and pistachios! 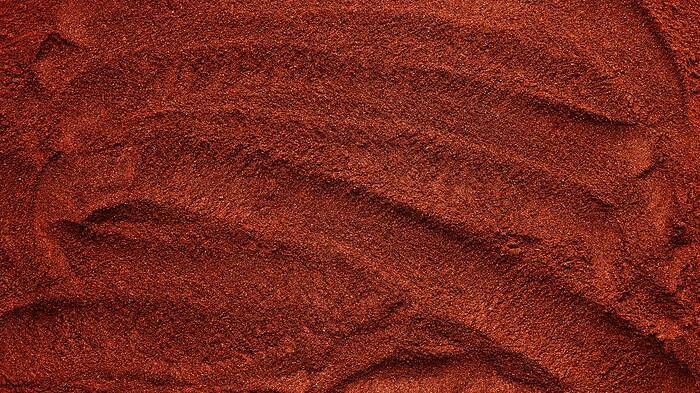 That one letter makes a biiiig difference. 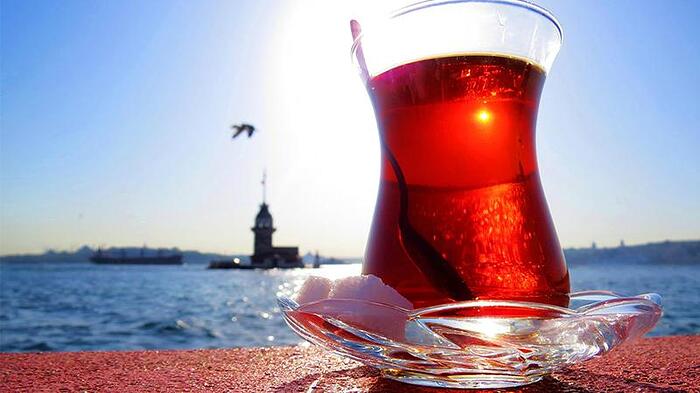 Turks start the day with tea, not coffee so that Turkish tea has an important role in our lives. Do you feel so full after a meal? Brew some tea. Is your friend on her way to you? Brew some tea.

I am also looking for recipes for a gift box that might include the Turkish tea, the mahlep (I’m unlikely to send baked goods) 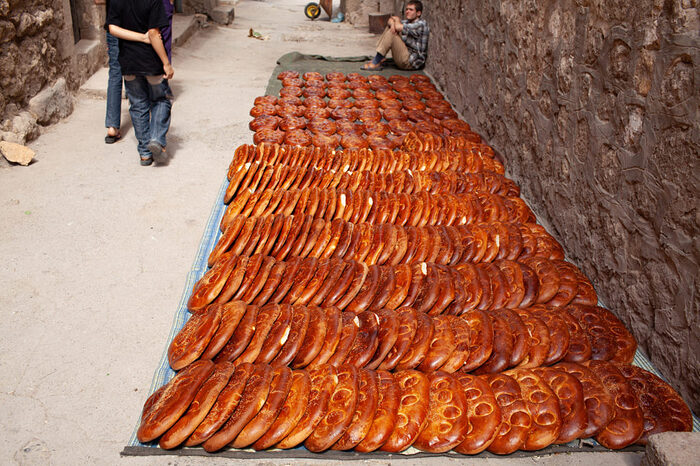 The ground pit of a cherry, known in Turkey as mahlep, can be hard to put a finger on, but quite a few Turkish pastries, ice creams, and drinks wouldn’t be the same without it.

And maybe bulgur. I don’t think I’ve cooked with it before, but I might be hoarding the bulgur. 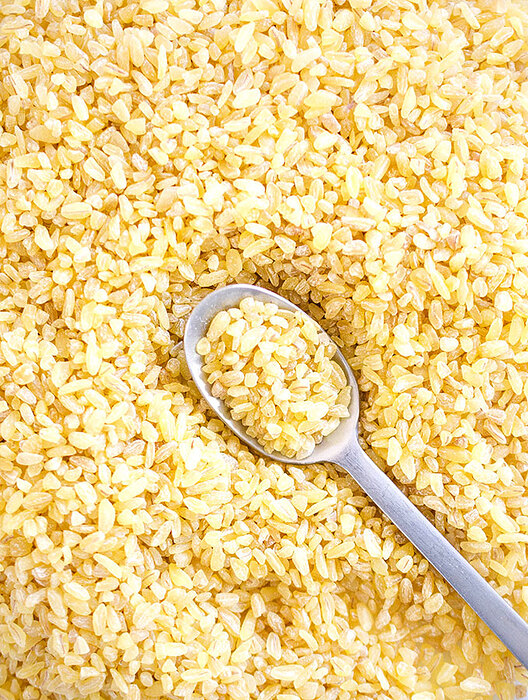 Bulgur 101: Everything You Need To Know About Cooking with Bulgur

Everything you need to know about cooking with bulgur, an ancient whole wheat grain that's packed with protein, fiber, and vitamins! 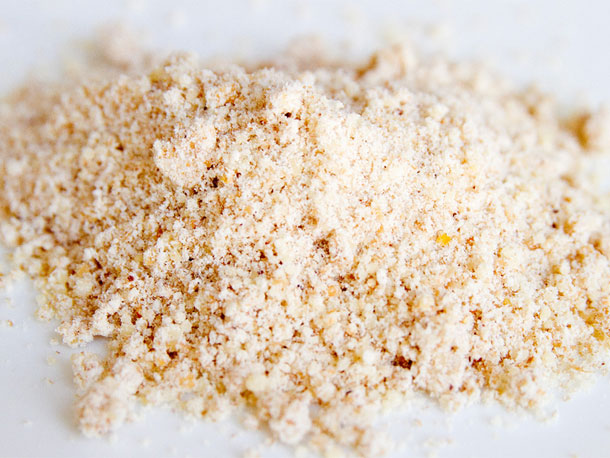 Here's another one of those spices that makes you wonder how people got the idea to eat it. Mahlab is a powder made from the seeds of the St. Lucy's cherry, found in different parts of the Mediterranean, that requires drying and cracking open...

I’ve been putting that ish on everything.
Spiced nuts and Sugarplums 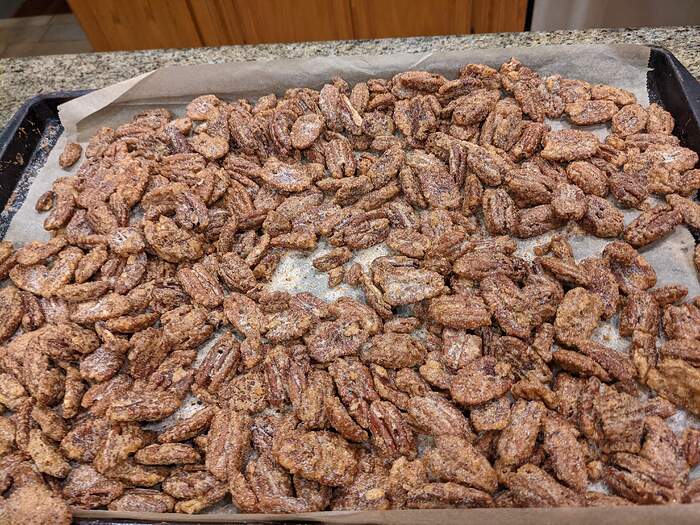 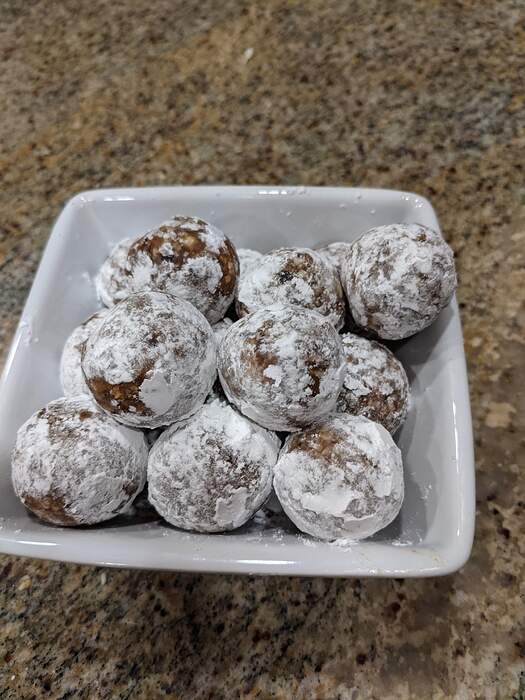 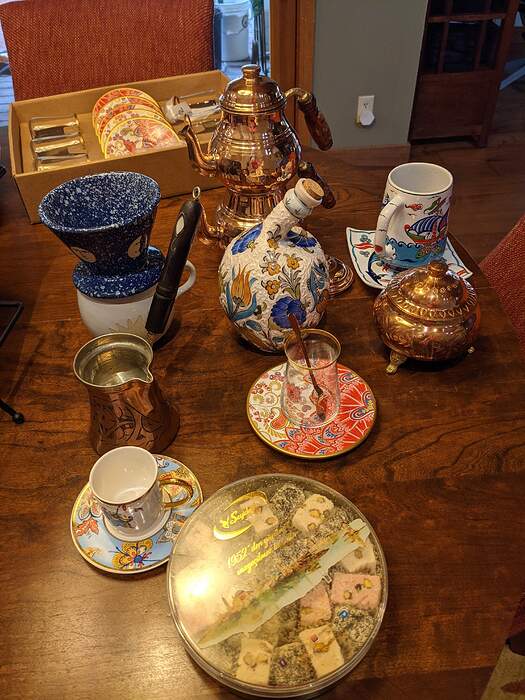 What’s the dark-coloured cylinder beside the speckled blue coffee cone? Or is that just the handle to the brass container in front?

That is the handle of a what I believe is a hammered copper “coffee pot” with mother of pearl inlay in the handle.

Hi – A friend sent me here. Some info:
Yes, kekik is ‘thyme’, usually wild thyme. You can use as you’d use any time. By the same token when a Turkish recipe calls for thyme you can use za’atar (the herb not the mix), oregano, savory.
Sumac is sumak and it can be used in any recipe (Turkish or otherwise). A very common use in Turkey is in an onion ‘salad’ or condiment to accompany kebabs: paper thin slices of onion rubbed with salt (to soften in), tossed with lots of parsley and sumac.
Mahleb/mahlep is a wonderful spice that adds an intriguing fragrance to baked goods. It’s also sometimes used in kofte (meatballs). You have to be careful when you use it because even 1/8 of a teaspoon too much lends a very bitter note. Here’s info and a recipe for mahlep bread pudding – you could sub other fruit for the peaches.

The ground pit of a cherry, known in Turkey as mahlep, can be hard to put a finger on, but quite a few Turkish pastries, ice creams, and drinks wouldn’t be the same without it.

Sahlep (the drink) is hard to describe — sort of like a hot milkshake but not quite. The orchid mentioned by a commenter above is nearly extinct and harvesting it is illegal, so it’s quite rare to come across the real think in Turkey anymore. And if you did it would be very expensive. So there’s no true sahlep in your mix packets, but try it anyway. Some packets are mixed with milk, others water, so be sure to use Google translate with the directions. Sprinkle cinnamon on the surface of the hot beverage.
The chilies – toz biber simply means ‘pulverised chile’ – pul biber means ‘crushed chile’ and is also known as ‘Aleppo pepper’ – both come in varied degrees of heat so it’s hard to know how hot yours is. One might use toz biber in a saute or to make kofte, pul biber is often sizzled in butter with mint for the spicy butter than tops manti. Urfa biber (mentioned above) is a different chile processed in an entirely different way, it’s not what you have there (you know it by it’s smoky fragrance and brick red-to-almost-black color) but I recommend you seek it out! 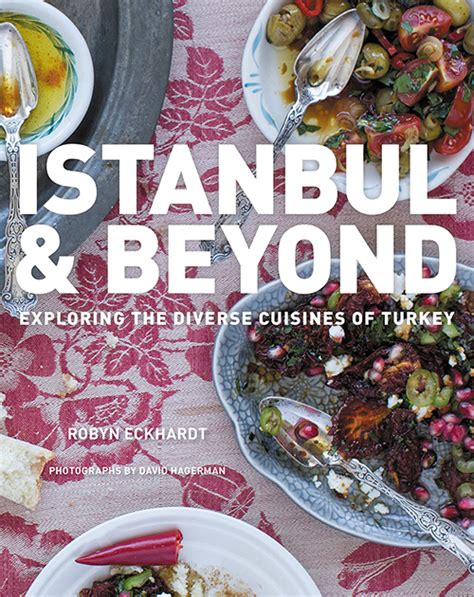 Hungry for Words is a food podcast with in-depth interviews of the some of the most interesting people in food. Featured recipe: Spicy market wings

This Turkish Kurdish recipe makes great use of sumac, in a different way – the spice is soaked to create ‘sumac water’ which sours the sauce for the cabbage rolls.https://coolfooddude.com/2017/10/13/cookbook-review-istanbul-beyond/#more-5008

This Turkish Kurdish recipe makes great use of sumac, in a different way – the spice is soaked to create ‘sumac water’ which sours the sauce for the cabbage

Though I’m not the original poster who asked the questions, your answer about the cabbage rolls is a surprise bonus for me. We have a big packet of sumac and this cabbage roll recipe looks like a delicious use.

It’s good to have a big Turkish population where I live. Many Turkish ingredients are readily available as we have a few Turkish greengrocers and shops here.

If you want to see big veins on a Turk’s forehead just say “Aleppo” peppers. Turks will quickly tell you it’s Turkish. 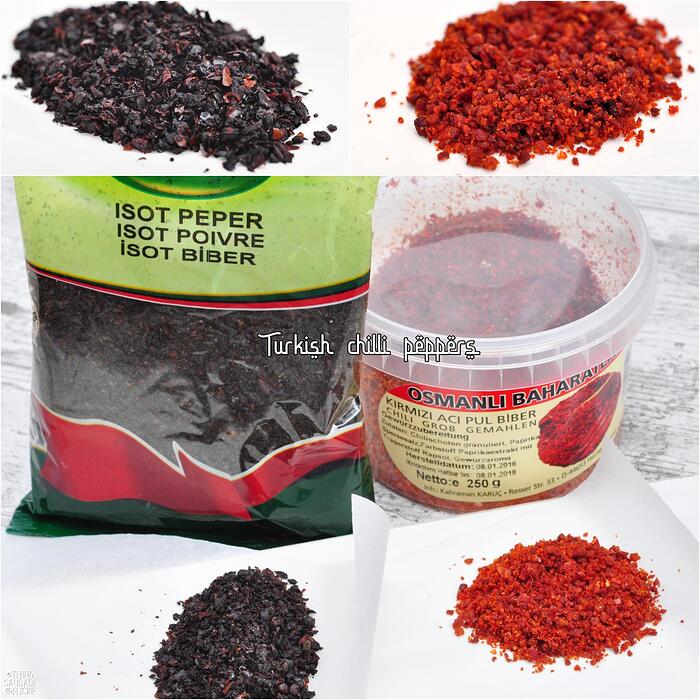 I like to have chilli pepper options when eating Turk-eque or Middle Eastern-style food. Isot biber in bottom right corner. 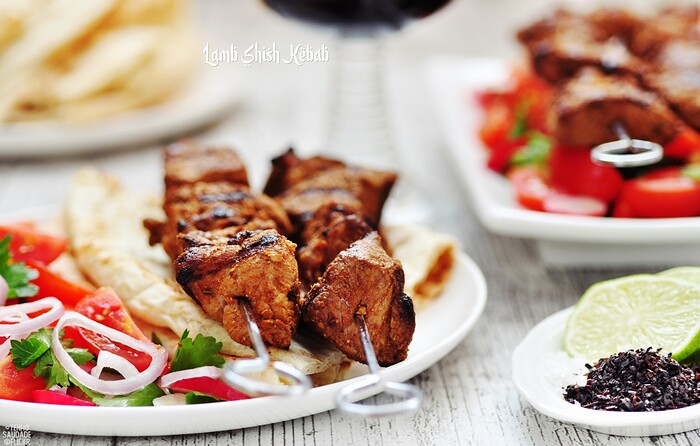 Aleppo pepper was indeed cultivated in Aleppo, Syria (it may still be, I don’t know). The very same variety of chile is cultivated in Maras and Antep (Turkey). Aleppo, Maras and Antep fell under an Ottoman administrative unit (Vilayet of Aleppo). Certainly much of what was, and is now (especially given the situation in Syria) sold outside of the region as ‘Aleppo pepper’ came/comes from Maras or Antep but the variety of chile itself is not solely ‘Turkish’. Pul biber (or Maras biber or Antep biber) might be labelled ‘aci’ (spicy) to indicate extra heat.

Sumac is sumak and it can be used in any recipe (Turkish or otherwise). A very common use in Turkey is in an onion ‘salad’ or condiment to accompany kebabs: paper thin slices of onion rubbed with salt (to soften in), tossed with lots of parsley and sumac

Thanks ! DIL made that, and I was wondering about the onions!l 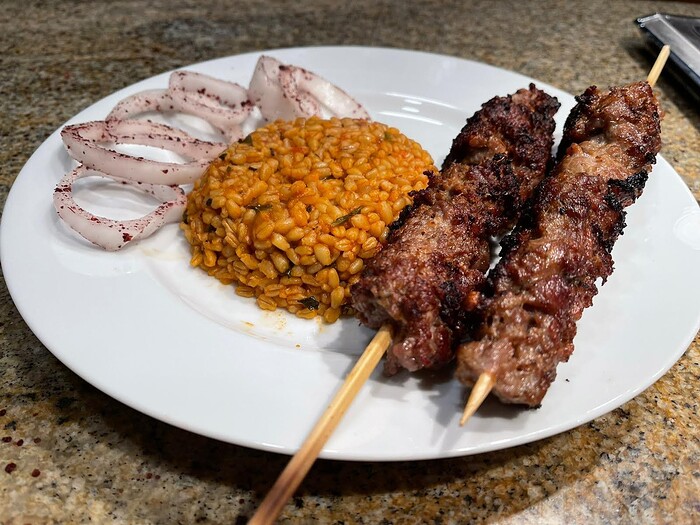