Well, I finally have my Badge of Honor like you other Cool Kids! Judge Marssy has suspended me from Chowhound, allegedly for being “aggressive” and “name-calling”. In obvious reality, my crime has been calling specific attention to the dismal rate of postings there since the site was “improved”.

I’ve been invited to beg Her forgiveness in a week’s time, confess my apostasy, and promise undying fealty.

Frankly, I’d prefer to suffer the Pear of Anguish…

Wow, had to look up the “Pear of Anguish.” Honestly, I’d rather beg forgiveness

I’ve been invited to beg Her forgiveness in a week’s time, confess my apostasy, and promise undying fealty.

Wow, had to look up the “Pear of Anguish.” Honestly, I’d rather beg forgiveness

I had to look it up too. Glad to see it didnt have anything to do with those Seckel pears Goodhealthgourmet recommended I try.

I’m actually relieved, so I’ll take it as congrats. It feels like the divorce is final–that’s good.

Welcome to the underground '-D

I gotta start smoking again maybe knock over a convenience store or something, I gotta build up my street cred if I’m going to keep hanging here.

“We are aware that we’ve requested you on different occasions to please abide by the guidelines which unfortunately you’ve failed to do so. Unfortunately, because of your latest behavior we had to suspend your account.
We really want to give you another chance, but we won’t be able to do so if we don’t see a commitment from you to follow the rules. Please think about it and give us an answer on or after June 23rd. If you agree to abide by the guidelines, we will reactivate your account.”
Marssy’s execrable writing abilities aside, I had already told them I was quitting. Apparently her reading comprehension grades aren’t stellar, either.

I don’t know why my post splits into two sections and typefaces like this. Deleting/reposting didn’t fix it.

And her favourite band is Iron Maiden.

You used the “preformatted text”

What you got is virtually verbatim to what I received:

We have asked you on several different occasions to avoid aggressive interactions with other members of this community including, but not limited to name-calling and personal attacks. Your recent behavior was brought to our attention by members of the community as creating a hostile environment on Chowhound.

We’re asking to take some time away from the site. This is not a permanent suspension, but we’d like you to reach out to us next week if you’re willing to change your behavior. Your contributions about food are greatly valued, and we’d very much like to see you stay an active member of the community.

A humorous aspect of this is that my offending posts were so vicious, so truly awful and terrible, the names I called so beyond the pale of human decency, Marssey left them up. See, http://www.chowhound.com/post/observations-problem-chowhound-1025430

I went back to Chowhound a few times and each time I noticed that many Chowhound posts were originated from really old posts, like people digging up 8 years old and 5 years old posts. Like people don’t have good idea to discuss anymore? 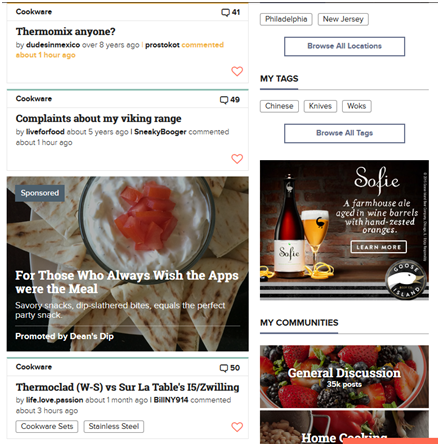 My brain hurts from reading that drivel.

I’ve been reading your posts, and they were indeed aggressive and name-calling. It sure looked like you were trying your damnedest to get suspended so…congrats, I guess.

LOL, that must be why all my posts are still up. But thanks, I take it as a compliment.

there seems to be a almost religious denial of facts on that thread - no CH is robust everything is cool whatever it’s a bottomless pit with a ECI wok at the bottom.

A fair number of your posts are gone. But I can’t prove that, so feel free to doubt me.

Was this over the short sarcastic post you made that got you called out and reported by one of the chief defenders? How ridiculous!

There seems to be a coordinated campaign, by a small group of posters, to ‘shame’ others into ending the complaining. I’m not usually a conspiracy theorist, but it feels a bit contrived to me. Like they all got the same talking points memo.

That is the standard verbiage for “go sit in the corner and think about what you’ve done” that has been used since long before Marssy came onto the scene. The ‘naughty toddler’ implications are really annoying.