Fillo/phyllo, not spanakopita or baklava

I have some extra fillo dough and was going to make spanakopita as a side dish for Xmas, but apparently my mom has already been recruited to make spinach gnocchi and two cheesy spinach things is redundant. I want to make a more cake-y dessert than baklava for my nephew whose bday is 2 days after.

So, what savory, non cheesy filling should I use? Maybe squash? Out of season tomatoes and olives? Not everyone likes mushrooms and most are sensitive to too much dairy (I’m not sure my brother realizes the gnocchi are mostly ricotta)

For savory, you can make tiropita, which are filled with cheese and eggs. 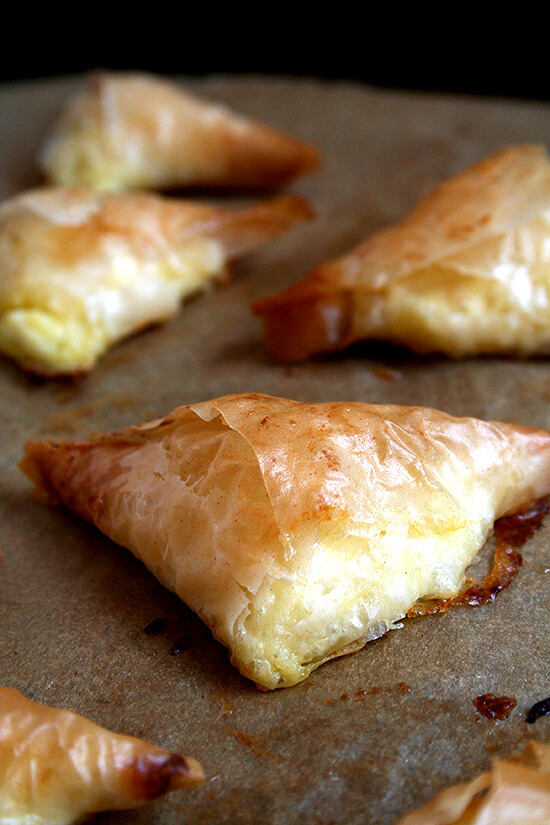 Tiropitas, feta-cottage-cheese-and-egg filled fillo triangles, are always a party favorite. They can also be made ahead and stashed in the freezer. 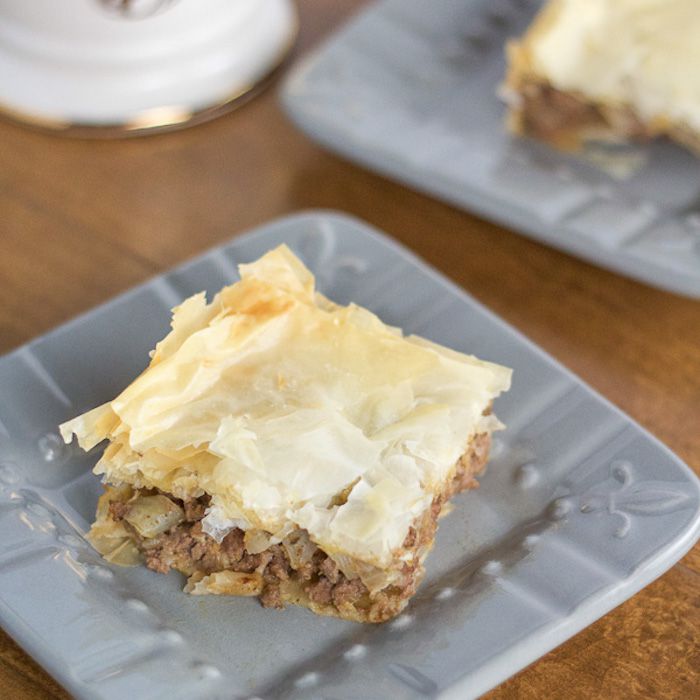 Give this tasty recipe for kreatopita a try. A delicious Greek meat pie, kreatopita is a flavorful meat mixture wrapped din phyllo.

(“kreas” is Greek for meat, and the pie is pronounced kreh-ah-TO-pee-tah)

Bougatsa has a custard filling, but isn’t doused with syrup like its cousin, galatoboureko. It’s still a dessert, though, with a a sprinkle of powdered sugar. 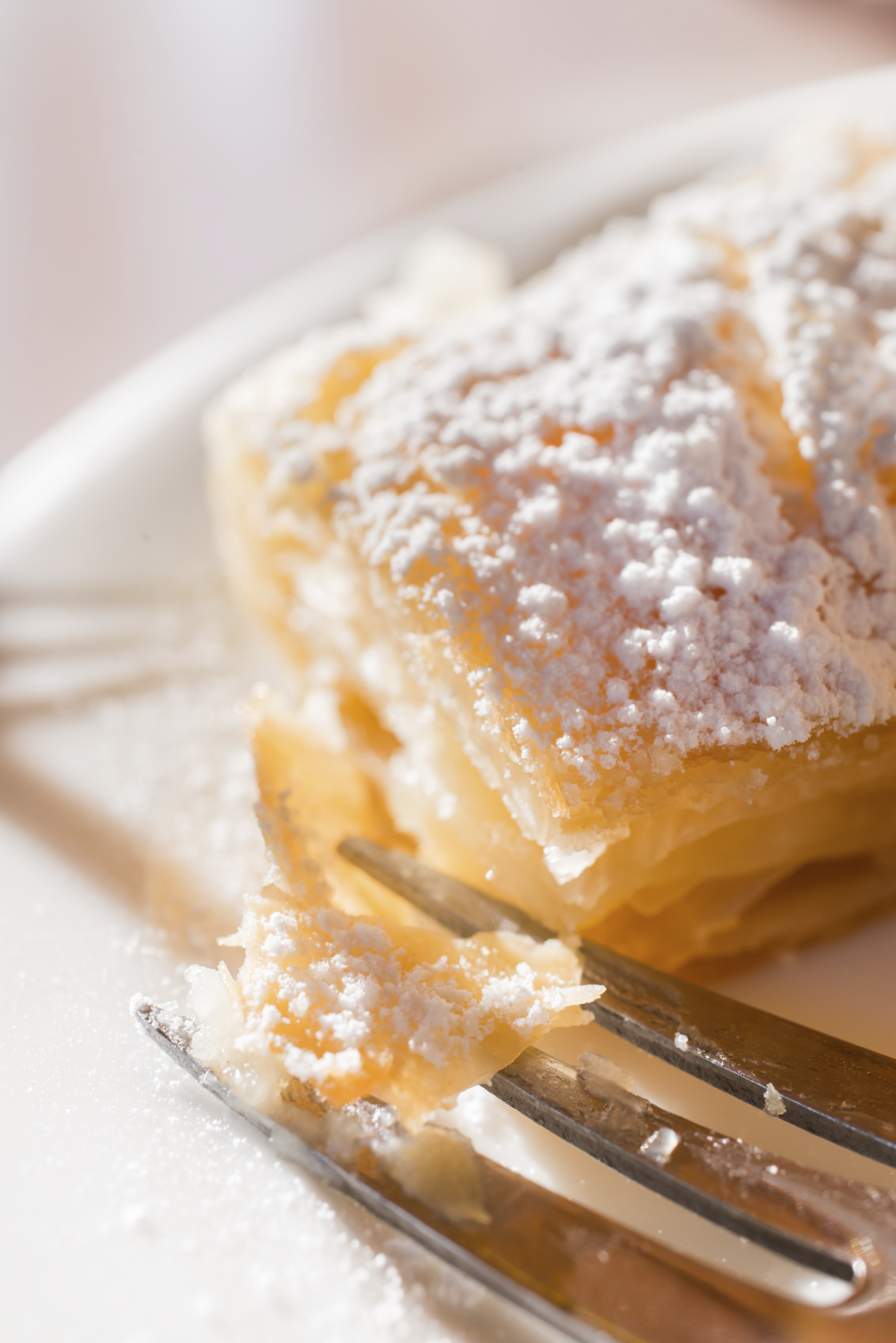 How to bake and prepare the recipe for Greek style custard pastry with filo, also known as bougatsa.

I would think you could put tapenade into little phyllo packets but I haven’t tried it. My first thought was duxelles but you said some non-mushroom eaters.

I’ve made seafood triangles in them for apps, which were delicious. As suggested, you could make meat or veggie pies, which could be done individually, or topped by the filo dough. They make excellent turnovers for berries or fruit mixtures. You could put your own spin on a samosa with them, or even a Jamaican meat patty. Hope this helps.

Ernie beat me to the post, but I’ll second the kreatopita, especially with lamb or half lamb/half beef. And you can also roll them up into triangles of various sizes for an eatable-out-of-hand version, if that’s desirable… (when they become kreatopites, if you want to be a purist about it.

I don’t have a “family recipe”, but the SpruceEats version looks good, though personally I’d ditch the feta. Unlike feta with seafood, I don’t hate feta with meat, it just doesn’t do anything for me that plain salt doesn’t do better…

Traditionally, it’d use their brik pastry but I have no idea where I’d get brik so would always use filo in its place. I’ve had a pigeon bastilla and loved it. Here’s a recipe for a chicken version: 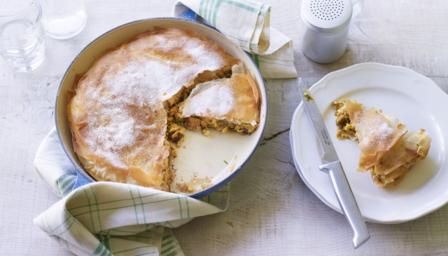 Bastilla is a Moroccan staple, combining sweet and savoury flavours, and perfect for sharing.

I was thinking a vegetable side dish to go with meaty main, but I think the main will be beef so maybe I’ll make some chicken and some veg ‘cause beef isn’t my favorite and I’m not trekking all the way to my brothers house to leave hungry

I’ve used it to make an apple pie triangles . Any time I have extra pie filling, I find filo an easy way to enclose fillings.

Have also used it to make small Bastilla rolls.

This really appeals to me; like an open faced fruit pie and it couldn’t be simpler. 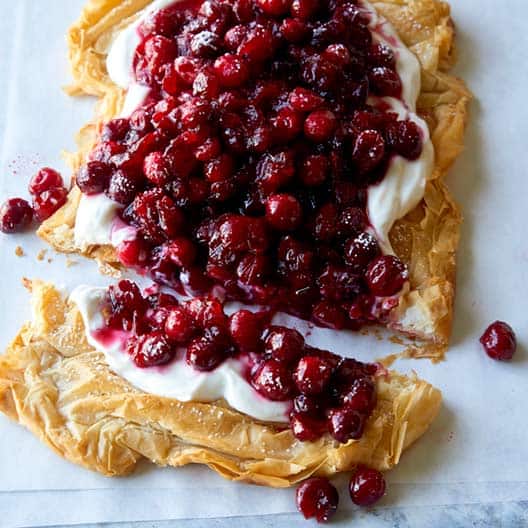 Today we have a simple and beautiful dessert that utilizes the cranberries we are all seeing in the grocery stores right now. This is a pretty low maintenance dessert. The phyllo dough is store bought, and the yogurt filling is easy to throw...

If you want a dessert option, this is delicious and very good looking for a holiday table. (Always check the website comments for some cooking suggestions) 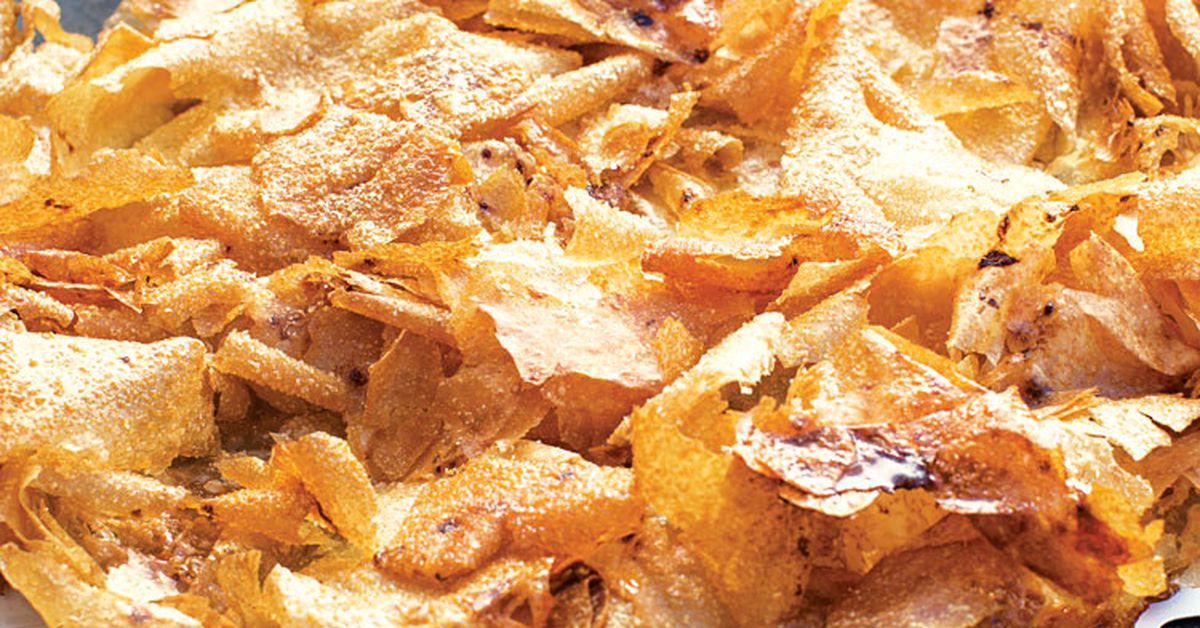