Festival Season is Upon Us - Houston

Here is one I haven’t been aware of:

I bet the food is good and a tad healthier than most!

Verrry innaresting. 7th Annual??? I’ve never heard of this before and didn’t realize we had that big a Palestinian community.

From the looks of the website there’s quite a bit still to be done before March 25th but I’ll keep checking back.

Traditional semi-annual reminder, Polish Festival May 5th-7th. Look for us by the dessert table. FYI the pierogis are frozen from Chicago, I saw the cases, but everyone loves them.

I’ve given up on the Greek Festival in Montrose. I don’t mind walking for a fortnight but the reward is a festival in a parking lot with dining under a crowded tent. The only thing I like is the retsina.

This festival used to be like the Polish Festival, held on the church grounds with enough people to make it interesting. Bigger is not better.

No mention of the Palestinian one.

I can cross off the Mac and Cheese Fest and Rodeo and probably the BBQ festival, but some of the others look interesting.

brucesw, brucesw,brucesw, the list from the Press includes and forgive the shouting, ALL YOU CAN EAT OYSTERS!!! at the San Leon Oysterfest Saturday April 29th.

It’s 22 bucks online and 25 cash at the door plus non-oyster eaters get in for 10 and there are other dishes including non-seafood.

I read somewhere on the website that these are select oysters to showcase Texas oysters.

While I can’t match my college days eating skills I’m confident that the wifeacita and I can easily knock off 4-5 dozen each if not more. I won’t be able to match the day when the fellas and I ate 72 each raw for openers at Angelo’s S. Main plus all the incredible Rockefeller, boiled shrimp, and fried shrimp you wanted. Fried chicken and biscuits were also offered but I limited myself to one of each being beyond stuffed by that time.

The Texas Outdoor Coastal Council – a 501c6 non-profit corporation - is hosting its 2nd Annual San Leon OysterFest on April 29, 2017, in San Leon, Texas. Thousands of residents in the Houston/Galveston area region are expected to attend...

. (I’ve been reading up on ramen etiquette).

That is one of the ones I am interested in but I hadn’t clicked on the link yet.

Is this too good to be true? $20 for ayce select oysters???
Also maybe kinda late in the season, considerin’ how warm it already is.

Having fished saltwater for many years the water temps always get knocked down by late fronts. I think the end of March or February would be better but we’re all in. Heavy rainfall is more of a concern to me for decreased salinity as oysters don’t do well in fresher water.

Got it in the mail yesterday…thanks.

We got ours the other day. The Wifeacita quickly squirreled it away to her office so she could cut out the pig pictures for her desk shown at the Bacon Bash fest.

Nice history of the Lebanese Festival:

“Dozens of booths sold garlic-coated chicken wraps, Lebanese beer and chocolate éclairs — Lebanon was under French control for about 20 years. The Lebanese ultimately rejected French rule, but embraced its pastries.”

(that seems to be the case in several other countries too!)

Dragging up an old thread to note:

I received a post card in the mail today reminding me that the Greek Festival at St. Basil on Eldridge is from May 17 through 20. 1100 Eldridge Parkway.

Admission $3 or 3 cans food donation. I haven’t been in a couple of years but I love it. Food is good, (pro tip: spring for the lamb - no pun intended), and the people couldn’t be nicer. Dancing, singing and maybe even a drop of ouzo or two.

Take the sanctuary tour. It’s cool. When I first started going to the festival years ago, they were raising the money to build it.

(That’s NOT cultural appropriation, it’s the cover of the post card!)

I have been to the “other” Greek festival, but not this one. I’m going to try and go, thanks for the data.

Texas BBQ Festival this weekend, May 19-20

Seems to be focusing on the music more than the meat. 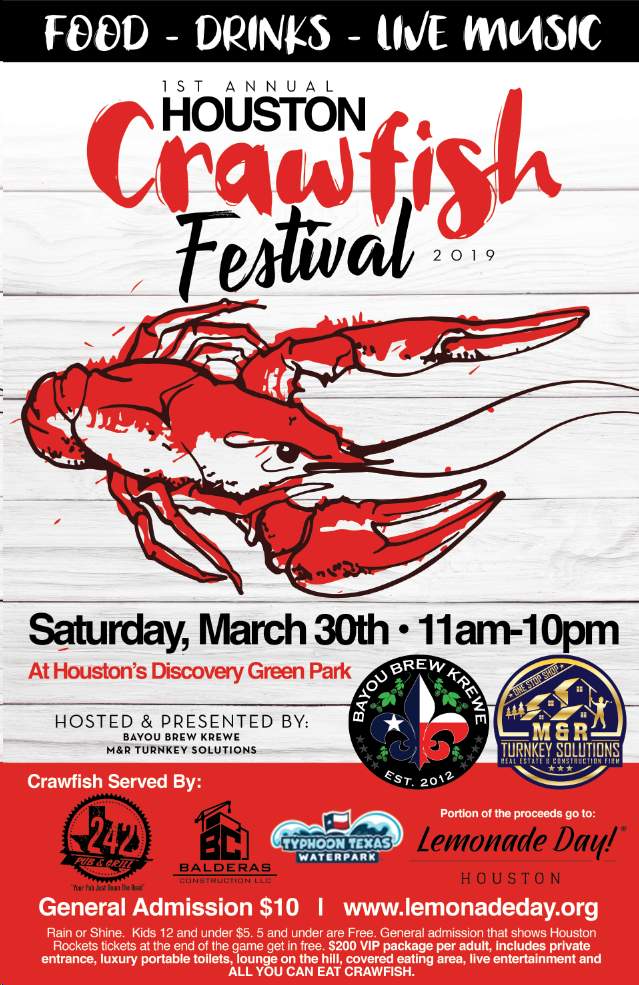 What ya get for the $10 entrance fee? Er, entrance?

The ad says a $200 VIP ticket gets you all you can eat mudbugs, luxury portable potties, and a nice seat away from the rabble.

I think you should take one for the team, I’m not going holding out for the San Leon oyster festival. It was closed last year due to all the run off from Harvey.

We came, saw, and ate copious amounts of oysters. The setup, at Bayshore Park about one hundred yards from Galveston Bay. It was cloudy and windy keeping the temperature down. You pay your twenty-five bucks, grab a beer and que up for various types of grilled oysters. There were a lot of people there and the lines took about ten minutes to get two or three if you are lucky. The Wifeacita quickly found out to eat the oysters back in line instead of scarfing them down on the spot. The pacing…