OK, I won’t be lazy this month! Here’s the new thread for area openings/closings for February 2021. Enjoy!

saw this one on Instagram; Dumpling Xuan, a new Chinese place in east Cambridge. Menu looks sort of promising & they have their own delivery through the website. Will try.

Interesting. Trying to get a take on what regional cuisine they focus on, but it really is a mish mash of dishes. Surprisingly not as dumpling heavy as I would have thought, but I hope they are good.

Errr, this interesting typo made me giggle, especially in light of the other thread on this board.

The Chinese reads Peking duck (half), but the English translation is a little off… thought that was a new twist on an old dish.

My first guess would be that it’s another TaiWanese joint. The presence of 客家小炒 (I translate this as Hakka hotchpotch) usually is a key sign of a TaiWanese place, and multiple other dishes suggest pan-Chinese from a TaiWan standpoint. They’re entering into a crowded market, but it’s close enough to the route home from work that I’ll go check it out some time.

On the other hand, some restaurants serve both Sichuan and Taiwanese fare and are inevitably better at the Sichuan. Judging by the use of pinyin in the name and menu, I’d suspect there’s at least one partner from the mainland.

The other hint for TaiWan is the Chinese name of the restaurant: 南北軒 (Nánběi xuān or South-North Inn) uses the characters for South and North (implying representing all the regions). But more importantly, Gourmet Dumpling House’s Chinese name is 南北風味 (South-North Regional Flavor) and the rival outfit, Dumpling Cafe, called itself 南北和 (South-North Harmony). Both of them are unquestionably Taiwanese style outfits (though at least one Dumpling offshoot does some pretty credible SiChuan cookery).

I’m much more inclined to believe a TaiWan outfit could do credible SiChuan cookery than the opposite, knowing what I know of the politics and history of China. I think Dumpling Xuan has named itself to try to make itself confused with well established TaiWan joints, with a menu to match.

well this won’t open until Spring but I just heard about it . . . and its opening news so why not post good news now.

Waltham will be getting a new macaron shop on Moody Street. Emma’s Macarons will be opening in the former Alba’s shop (I miss their awesome greek yogurt). Their sign has gone up but they don’t plan to open right now until Spring. I’m glad something is going into that space and hope they do great! 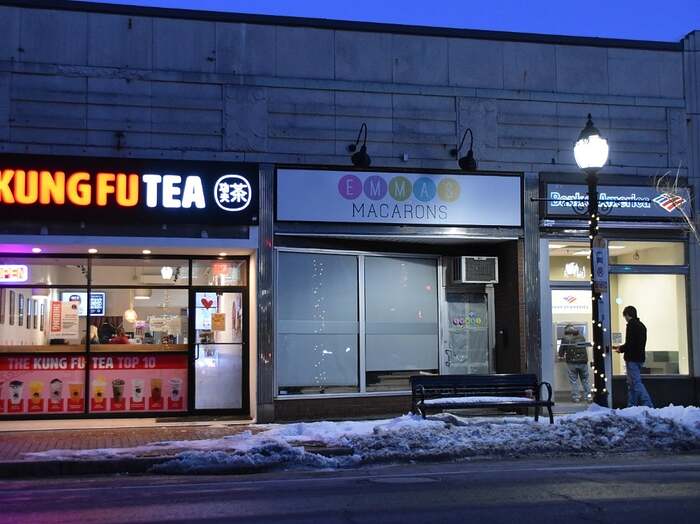 Emma's Macarons To Open On Moody Street In Waltham

The shop's owner said she hopes to open sometime this spring.

Eater reports that Gustazo in Cambridge reopened earlier this month after hibernation.

I was very curious to see the strong reactions to this in the Boston Globe. Granted, I did not go to college here nor spend much of my early adult years in the area. Was it any good or is it pure nostalgia in operation here (not a bad thing)? I have some vague recollection that I met a friend there once and never felt an urge to return. But even writers like Kara Baskin, whose views on food generally line up with my own, are devastated so now I wonder what I missed.

Was it any good or is it pure nostalgia in operation here (not a bad thing)?

For me, it was a bit of both. Border is somewhere that has been in my life for decades. I have great memories there in my college years, but it is also somewhere I still took my family and enjoyed quite a bit right up until it closed. Was the food gourmet? No. However, everyone usually left happy. In the age of pretentious, overpriced, small portions, wallet busting for families; I had developed appreciation for the Border anew. My kids will miss the hot, fresh tortilla chips and salsa, something we never said “no” to when the yasked for more. I’ll miss the french quarter chicken. I’m sure the wait staff won’t miss cleaning up when one of their absurdly large (32oz?) water cups got invariably dumped.

Harvard Square really couldn’t afford to lose another place like this, yet here we are.

I only went to the Harvard location a long time ago and it was just another Tex/Mex restaurant. I think it’s mostly nostalgia. However, I have frequented the Burlington location and the food is good and very consistent. The chips improved greatly a number of years back. They used to have a Caesar with crawfish and shrimp that has since been 86’ed. Looking back at my blog it seems that I get the Catfish New Orleans 90% of the time.

Nostalgia, I say. I did spend my college years and other year since then around these parts, and Border Cafe became a fixture in Harvard Square.

I remember that we took my husband’s younger siblings there years ago on a visit. They loved sipping on blue margaritas—very trendy at the time!—and eating spicy-ish foods they never had on the dinner table back home.

For me, this line from Kira Baskin in the Boston Globe article nails a very specific flavor of nostalgia for the Border: “ I ushered my wide-eyed, rural beau into a jam-packed restaurant that reeked of tequila, salt, fry grease, and Calvin Klein perfume.“

Not sure if the food evolved over the years. Feelings of connection and fun are what will be missed, I’ll wager.

I always wondered as well, as I ate there twice. The first time I got sick afterwards, and generally, I’m one and done with that type of thing, but a few years later, I was cajoled back by a friend who loved it, and I got sick again. Getting sick like that has only happened a handful of times in my life (twice at other places that I can think of), and no one I ate with got sick, but something in their food didn’t set well with my generally cast iron stomach. I was trying to figure out what was there before the Border Cafe, however.

I hardly went to Border as a college student…maybe once or twice and probably only grazed on chips and I wasn’t a drinker back then. No, all of my Border experience has been relatively recent. Most of my visits were with a former company, a biotech in a hinterland between Central and Harvard. The lunch and Happy Hour cultures were VERY important and often times, they merged. Our beloved head of Biochemistry was in charge of all group lunches, which we had to celebrate good news, the departure/arrival of personnel, a sunny Friday. His other favorite place was the Maharajah in Harvard Sq. Some of us would groan whenever the venue was announced but no one ever protested, lest we hurt his feelings. We had some raucous, fun lunches in the basement, I must say. I think I always ordered catfish something or other and it would be perfectly fine and a HUGE plate of food, necessary to buffer oneself against the margaritas…we did have to return to our experiments waiting at work. Service was always friendly and the food came out with amazing speed. I think our group of 20 or so could stumble out of there under 1.5 hours (or maybe even less?). This past Sunday, we decided to walk around Harvard Sq and we were both saddened at the ghost town-like ambiance. When I have time, I’ll write up our lunch from that day at Brato Brewhouse (plus several other recent dining experiences…I just haven’t had the time). I’ll be curious to see what comes in that space. They’ll have to do some serious cleaning/fumigation in there.

My other experience is with the Burlington location which is basically right down the street from us in Arlington. B LOVES Border. I mean loves it. And he knows I don’t so it became a running joke between us that if we were heading out to eat and the restaurant choice was his, he would say “Border.” I did go a few times and, again, nothing offensive about the food except that it always feels very old-grease-y. Service was always friendly. I think we played hooky one Friday pre-spring onion and did a serious job of some day drinking. B would sometimes take spring onion for a guys’ lunch out which suited me just fine.

Eastern Standard and Island Creek in Kenmore Square have closed for good; I think the Hawthorne, too.

Sounds like a 1-2 punch of the pandemic and an unsympathetic landlord. Harker knows hospitality, I’m hoping he’ll regroup with new ventures coming out of the pandemic.

Border was my not so secret indulgence that always tarnished my foodie cred with friends. I loved the margaritas, blackened chicken fingers, fajitas. I loved to reminisce during happy hour about Oxford Ale House that used to occupy the space, recalling the plank between two posts (still there) that held up our pints.

about Oxford Ale House that used to occupy the space

ah, thank you! I’ve been trying to think of this since kimfair mentioned trying to remember what was there before, and it was driving me crazy.

My wife kept saying it was Oxford Ale House, but the only mention online I found mentioned that it burned down in the late 60’s. It obviously got re-built, as she, and you remember it, and after more online digging I found reference to it in the late 70’s, early 80’s (which was when my wife worked in the square).