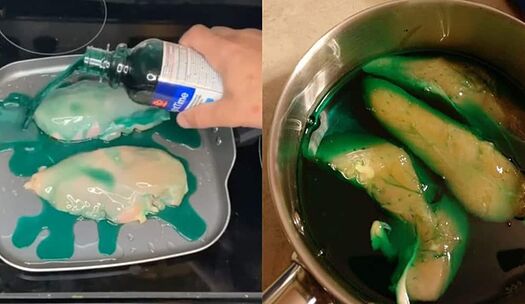 A recent social media video challenge encourages people to cook chicken in NyQuil (acetaminophen, dextromethorphan, and doxylamine) or another similar OTC cough and cold medication, presumably to eat.
The challenge sounds silly and unappetizing — and it is. But it could also be very unsafe. Boiling a medication can make it much more concentrated and change its properties in other ways. Even if you don’t eat the chicken, inhaling the medication’s vapors while cooking could cause high levels of the drugs to enter your body. It could also hurt your lungs. Put simply: Someone could take a dangerously high amount of the cough and cold medicine without even realizing it.

Each challenger is entered for the Darwin Award.

Now this is totally shocking! One would think it’s health food for eating while sick! JK

Objectively speaking, this is no less stupid than eating Tide pods or setting oneself on fire for those TikTok challenges. I’m ok in these cases of letting natural selection run its course.

I don’t know. Is this really a challenge? Or do some people really think this is a home remedy to cure cold/flu?

Add to the fact that it looks horrible. YUK!!
“Green eggs and ham” was a book to entertain children, not a cookbook. Why would anyone do that to that nice chicken breast, such a waste.

Look at that beautiful green color.

It won’t be a waste if you EAT it.

The ‘Tide Pod’ thing wasn’t real… exactly. That is, it was a joke. There were a lot of CLAIMS of people eating tide pods, but very few people were so stupid. Now, it was a BAD joke, and a DANGEROUS joke, because there are stupid people. Some are stupid because they are very very young, and don’t know any better. And some are just, well, stupid.

I suspect this ‘trend’ is just another joke. TikTok has this weird niche thing where people come up with the most visually repulsive food. Very little of it is ACTUALLY eaten. It’s a gross out gag “for the lulz”, as the kids no longer say.

So far as I’ve been able to find, there has been no massive uptick in people having overdosed on cough medicine as a result of NyQuil chicken. Now, certainly, someone out there is gonna be dumb enough to try it, and might get sick from it. Stuff like this puts agencies like the FDA in a tough spot. If they comment on it, they risk giving more exposure to the (probably) bogus trend, thus turning it into a real trend. But if they don’t, some 10 year old will end up in the ER and someone will scream about “someone should have DONE SOMETHING.”

Is there an answer here? I dunno. More and more I’m of the opinion that we, as a species, have just about run out the clock. I give it another 100, 150 years 'til the planet decides to start over with, I dunno, insects, probably.

Nope… just no way. That color is just so upsetting.

My wife said the video was supposed to be a joke, riffing on the notion of chicken soup being medicinal.

That may be true but the collateral damage to people who don’t read and don’t have common sense is what’s always unknown. And have you seen the videos of folks who “accidentally” set themselves on fire? It’s incredible how many of them there are.

And have you seen the videos of folks who “accidentally” set themselves on fire?

Truly, Idiocracy was far more prescient than anyone hoped. Ow, My Balls! isn’t just a show, it’s an entire GENRE.

is not terribly disturbing to me.

It is ever a truism that as much as we might wish it otherwise, natural selection is only an actual thing at the macro level.

As individuals, the stupid have proven altogether too resilient.

I hate how right you are.

This one gets the Darwin Award

That’s the thing - is this really “a thing”? Is anyone really doing it? Our media reporting these sorts of things as “dangerous trends” are frankly pathetic, if they’re not also reporting frequencies/numbers.