Favorite way to use tuna steak?

I believe it’s sushi grade, but it’s been in my freezer for a bit.

Well this could be a huge topic but how much do you approximately have and how many people are you feeding?

Do you and/or any of your guests like raw tuna?

Ok - feeding 3. Have a pound or so. Waited till my fish hater had dinner plans. We do all enjoy raw, and the last thing I’d do is cook the heck out of sushi grade tuna. Any prep will have to have at least some nice raw center. I’m toying with poke, sesame crusted and grilled, or nicoise salad. But it’s just not a protein I use often due to aforementioned fish hater.

Let me preface this by saying I’m not one of the many people who like tuna raw or just seared and really don’t like it rarer than medium rare. And my companion in life can’t stand it and regards it as cat food. So, it’s something I cook when there’s only me in the house. It also means I have no interest in top grade expensive fish.

And, yes, it’s good with a Nicoise.

For an East Asian spin, I marinate it in light soy sauce, mrin, a little sugar and grated ginger. It’s then cooked under the grill. I eat this with noodles, simply enhanced with some softened spring onion. And sliced cucumber which is also marinated in and served with rice wine vinegar, sugar and dark soy. I like sliced sushi ginger as well. This is definitely one of my solo feasts - and beign solo, no-one gets to see just how bloody useless I am with chopsticks.

Funny - it’s not on my standard grocery rotation, but was on sale and I couldn’t pass it up. Your prep sounds tasty. 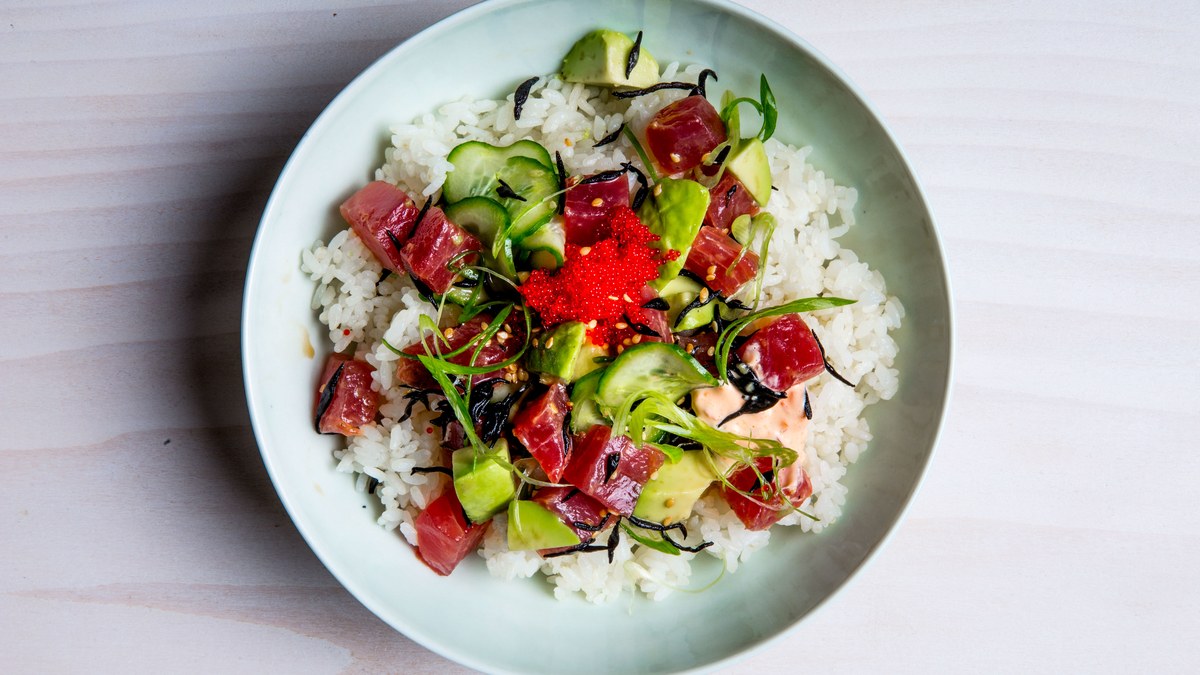 The real key here is to use the best-quality tuna you can find. When in doubt, ask your fishmonger if he would eat it raw. If the answer is no, neither should you.

I added diced cooked beets and raw mushrooms to this.

Season/marinate with soy, ginger, sesame oil, crust with sesame seeds and sear on all sides. Slice thin. Make more dressing/sauce with the same ingredients as the marinade.

Eat over a lightly dressed salad, over long rice crackers, or as “hand rolls” - seaweed snack, sushi rice, avocado, plus a slice of tuna.

This is almost to the letter one recipe I’ve been eyeing: 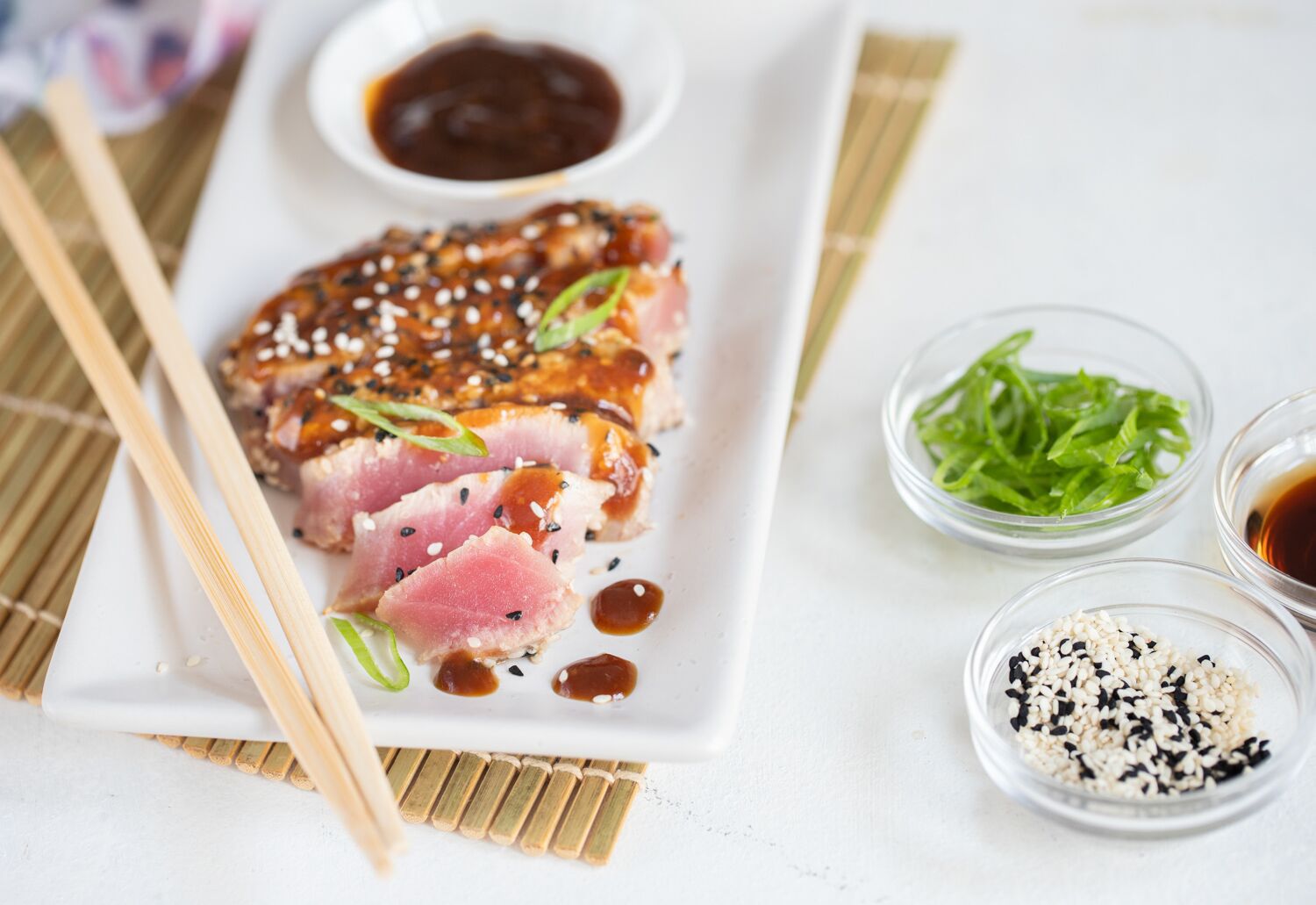 Easy enough for a weeknight, special enough for company, marinated grilled tuna steaks cook up quickly on a contact grill.

Sounds yummy. Do you think it would work ok w/o a grill? Broiler? Cast iron pan?

I don’t like the grill idea - the sesame seeds fall off as it is. I use a carbon steel frypan.

I like @Rooster’s idea of poke, with a nice light, soy and vinaigrette-y dressing. I usually find tuna steak too meaty, so I prefer it in smaller pieces, and also just seared on the outside too. The light tart sauce of a poke or even a crudo goes a long way to making it less heavy.

I would probably do thin slices, sashimi-style, and make a crudo with a bit of olive oil, ponzu (or other citrus-y juice), and some yuzu kosho. You can throw in a few micro-greens if you want to make it look fancy. If you want some crunch too for texture, how about thin slices of radish on top too for a nice kick of pepper?

We have a quite good poke place about a mile from home, so I want to go out of the box and do something a little different. Also, I don’t want my fam to start comparing my effort unfavorably with the other one

I usually press black pepper on the steaks and sear in a hot pan.
Tried this recipe the other night, very easy and simple. 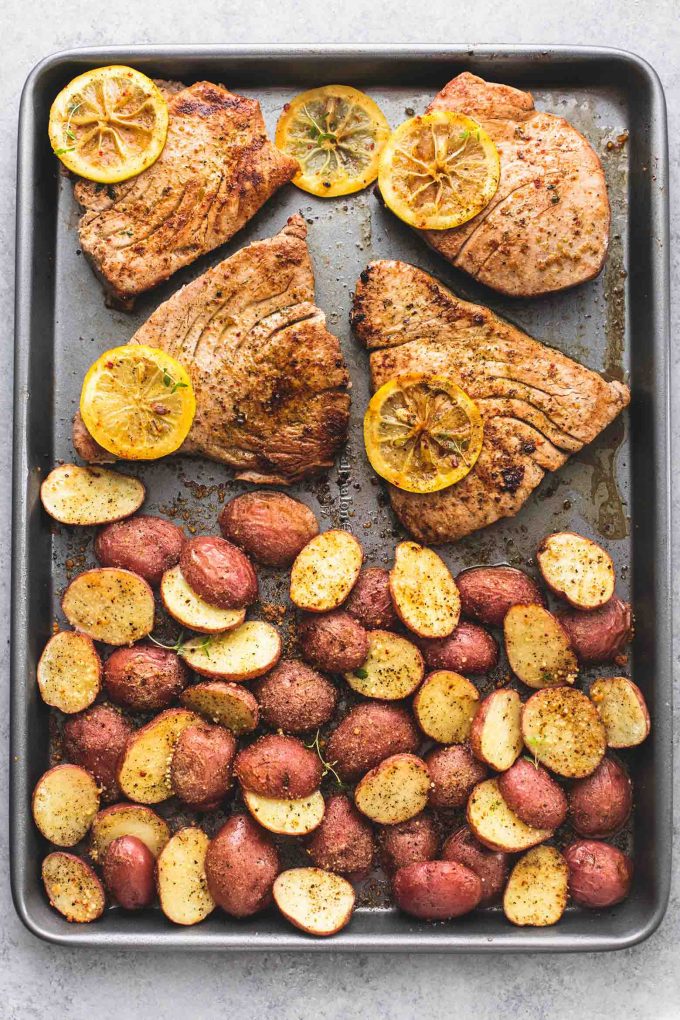 Reviving this topic in hopes of hearing from the experienced cooks of HO. Here’s my situation: Usually I prepare tuna steaks on our propane grill outdoors in good weather. Pleasing sear and pink center, yay. But when our fish CSA offered local yellowfin tuna, I couldn’t resist even though it’s winter and the grill is snowbound. So decided to broil the tuna steaks, after marinating them in olive oil for about 30 minutes, based on the recipes I consulted. Whoops. Not easy to keep a close eye on the steaks to maintain a pink enough center in both. Plus the outsides didn’t get any amount of browning even though I heated the broiler pan first.

Am I better off just saving tuna steaks for when I can use our grill outdoors? Or can I achieve decent results using my electric stovetop (non-induction) and maybe my cast-iron skillet?

Fresh tuna is a spendy treat for us. I’m particular about cooking it to our liking.

It might be worth trying the nonstick quick flip method – start from cold in a nonstick pan, sry great to medium, and flip every minute until it’s cooked as you like.

Alternatively, you could freeze the fish, get your cast iron smoking hot, then sear while frozen. Transfer to a low heat oven until it’s warm/cooked enough.

I’ve been using a lot of shio koji lately, which helps a lot with rapid browning, so you could also try a short (3 hr) marinade with that and then go for the above nonstick approach.

Alternatively, you could freeze the fish, get your cast iron smoking hot, then sear while frozen. Transfer to a low heat oven until it’s warm/cooked enough.

Intriguing. Thanks especially for this idea about cooking tuna steaks from a frozen state. Hadn’t thought of that one.