Eater just posted their picks for sandwiches in SF and the East Bay. What do you think of their list, and more importantly, who makes your favorite sandwiches in the bay area? A sandwich I really liked from the past year is the cemita at the Los Carnalitos food truck in Redwood City. It’s a type of sandwich that originated in Puebla. Their version uses a good bread layered with beef milanesa, avocado, stringy queso Oaxaca, chipotle paste, and a fresh herb named papalo.

These are my thoughts on Eater’s picks, just about all of which I’ve seen on other sandwich lists:

I had once, was just OK

I would not recommend

Molinari Delicatessen . I enjoy the head cheese sandwich with fresh mozzarella and olive oil . On a sweet roll from the bin .

Some sandwiches/places in the lists that I like:
Banh Mi from Saigon Sandwich. Especially the roast pork, roast chicken, and xiu mai.

The Italiano, untoasted, from Submarine Center - Not the one on the list, but this is a pretty good italian combo sandwich, though I like mine with mayo as well as italian dressing which I think some east coasters frown upon.

Porchetta sandwich from Roli Roti - I like the crackling that they put in this sandwich. The roll can get a little chewy though.

Oyster Po’ Boy at HRD Coffee Shop - This is good but needs to be eaten quickly or else the kimchi slaw will make the bread soggy.

The Mick from Deli Board (not the one on the list) - Roast beef, american cheese, lettuce, pickles I think, onions, and “mick sauce”. I’m pretty sure they call this the Mick because it tastes like a Big Mac, in a good way.

Some sandwiches/places in the lists that I don’t like as much:
Pastrami Sandwich at Wise Sons Jewish Delicatessen - Too little pastrami, pastrami was kind of plain. I’ve only had it from their SoMa branch though, maybe the one in the Mission is better.

Korean Steak Sandwich at Rhea’s Market & Deli - I’ve had this a few times and have been disappointed each time. Something about this sandwich doesn’t work for me. I think it may have to do with the unmelted american cheese which kind of clashes with the bulgogi. I’ve also found the slaw to be watery.

Sandwiches/places I like that aren’t in the lists:
Avocado Turkey Club from Roxie Food Center on dutch crunch - Good bread and the right amount of saucing. A convenience store with a sandwich counter across from Balboa Park in SF.

Fried chicken sandwich from Gregoire, Oakland - On a soft toasted roll with a spicy slaw. They usually have it on their monthly sandwich menu.

The 500 Club from Clare’s Deli in the Mission, SF - A triple decker club sandwich with some added salami. I like the texture of their bread.

Meatball Banh Mi with a Fried Egg from Banh Mi Ba Le, Oakland - The egg yolk is runny and melts into the warm meatball. Good bread.

Cheesesteak from Phat Philly in the Mission, SF - A good cheesesteak on an Amoroso roll. They use wagyu steak and it is very juicy.

Not a big sandwich fan, but I’d nominate the Pan Con Chicharron from the Sanguchon truck and something (probably the short ribs bulgogi) from Koja Kitchen. There should be a pork belly gua bao in there, and I’d nominate the one from Spice Kit (get two, they’re small).

I’d pick the house banh mi at the Sing Sing Coffee Shop over anything from Saigon Sandwich.

[Edit to add the Molinari Special from Molinari Deli.]

T-Rex has a good fried oyster po’ boy, but it isn’t always on the menu.

I’ve never had an egg on a banh mi, but the combo with meatballs sounds tempting and Banh Mi Ba Le is great.

Do you get the classic at Phat Philly?

A pastrami you might like is at the Refuge in Menlo Park. @bbulkow recommended them in another thread, and I thought their reuben was excellent— thick slabs of smokey pastrami on thick cut rye bread. 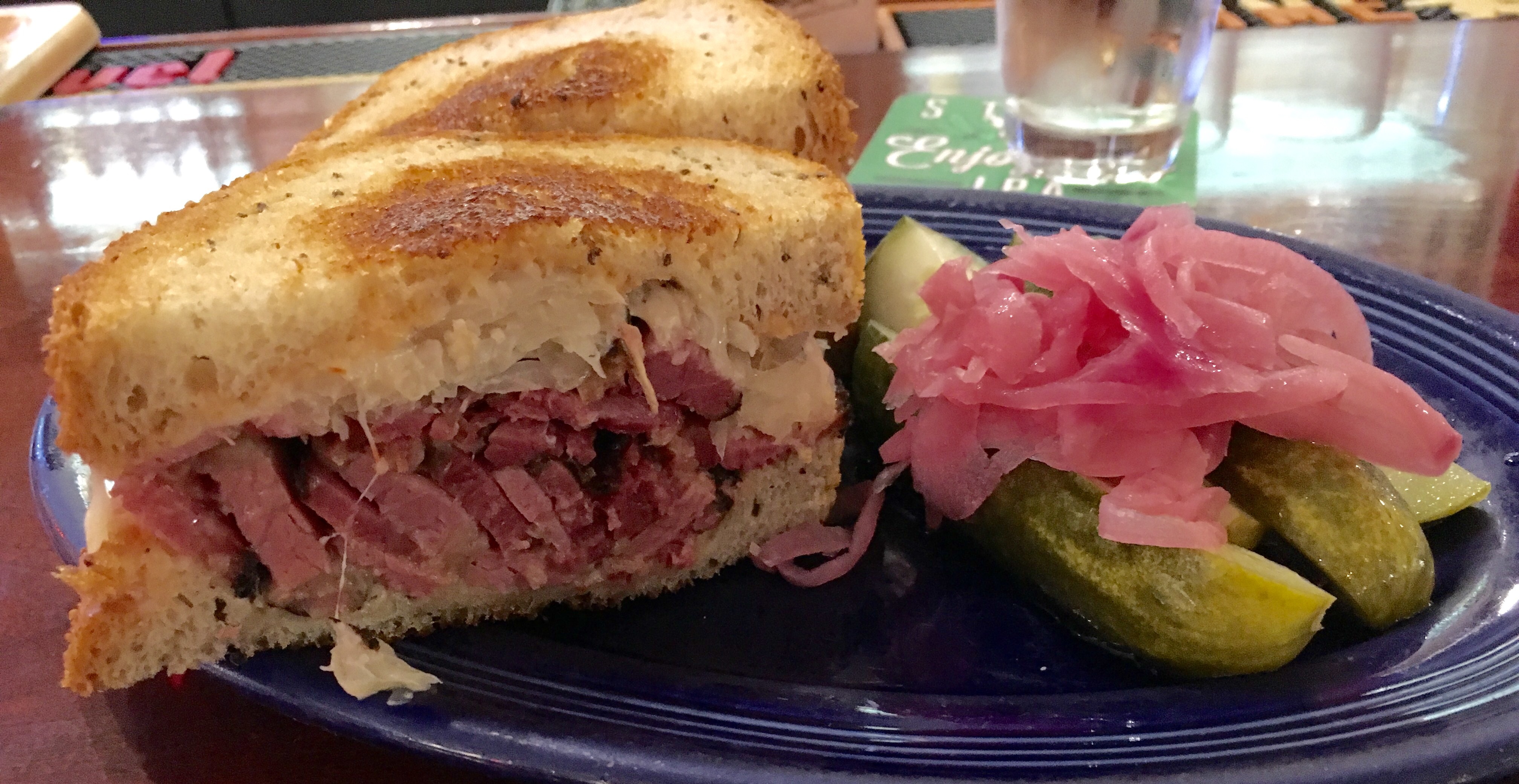 Not a big sandwich fan, but I’d nominate the Pan Con Chicharron from the Sanguchon truck

Good to know! I really liked their lomo saltado sandwich back when they were called the Mochica truck

Haven’t been to Phat Philly in awhile but I usually get the classic or the cheesesteak hoagie if I’m feeling eating something marginally healthier (because it has vegetables and stuff in it). Usually get it with onions and cheese whiz, I like it a little better than their house-made cheddar beer sauce. Feels a little wrong to be mixing cheese whiz with wagyu beef though.

The Refuge’s pastrami definitely looks better than Wise Sons’, will check it out if I’m down there. Bread looks good too.

Speaking of pastrami, the Sandwich Place across from the 16th St. Mission Bart station has a pretty good one. It’s sliced thin with a healthy amount of fat, on a good roll.

+1 Refuge. Two locations, both good. Not a Reuben fan, their pastrami sandwich without all the Reuben adds works fine. Belgian beers go well with the pastrami. Also enjoyed their pickle plate side dish.

Eater’s List prompted me to try the 4505 on Diviz pulled pork sandwich and it was perfect and is now on my all star list. Other items at 4505 are good but not all stars.

My other favorites in no special order:

Smoked Salmon on Bialys, open faced, at Wise Sons on 24th St. Afraid I disagree with other posters, Wise’s Pastrami is IMHO best in area, only thing that approaches Carnegie Deli in NYC which got me through grad school usually at 2 AM, but not with enough healthy fat – so doesn’t make my list.

Ex-Boyfriend, preferably on Dutch Crunch with extra dirty sauce at Ike’s. This is not on the posted and web menus for the SF location, but has always been available. Salami, bacon, avocado, and… Mmmm.

I just had the fried chicken sandwich from bakesale betty for lunch after quite a few years. Overall the sandwich was very good, the chicken had a good batter and was not dry. The cole slaw had a wee bit of spice from the jalapenos and gave the sandwich the necessary moisture. Overall for the price ($8.25 + tax), i think it is one of the better sandwiches in the bay area.

I was not very impressed with it a few years ago, but today it was great

Has anyone tried Merigan’s near the ballpark?

I just ordered their “Arista” for lunch today; currently en route. I wanted to try the porchetta but it wasn’t available. They supposedly do “authentic” East Coast style Italian subs… I’ve head that before in the Bay Area so we’ll say how it turns out. Just wondering if anyone’s tried their meatball or eggplant parm and what the consensus is on this place; particularly if you’ve migrated westward, like me, from the opposite coast?

+1 Refuge. Speaking of bread, a credible beef on weck (gold standard = Schwabl’s) would be a find.

Merigan is a good stop for a breakfast sandwich - opens at 8 am - easy parking at early hours. We liked the 1/2 portion of the Arista for $7.

My favorite Italian sandwich is at Constanso’s Sandwiches in the Bayview.
4120 - 3rd Street (between Innes & Hudson)
Good value. great taste.

Banh Mi at Kim’s cafe in Albany, where they use Acme rustic baguettes instead of the traditional soft rolls.

I’ve also come to like the very basic roast beef or turkey sandwiches at Brennan’s hofbrau in Berkeley. The meat is freshly sliced from the big roasts, and they don’t offer much other than tomato, lettuce, mayonnaise (or, if you like, garlic mayo).

House-cured pastrami at Saul’s in Berkeley, on Acme rye bread, with nothing more than a touch of mustard.

Betty’s Bakeshop on Fourth St. in Berkeley for their “special” sandwiches, in particular the steak sandwich with ancho mayonnaise on a Kaiser roll.

Has anyone been to Rye Project in SOMA?

I’ve been curious about their pastrami/corned beef sandwiches.

What do you get at Costanso’s? We usually get sandwiches at Roxie or, less often, at Piccolo Pete’s. I would love another option on our side of the city

I have been to Rye project a couple times. The pastrami wasn’t as fatty as I had hoped. Corned beef was also not particularly juicy.

My go-to at Constanso’s is the Italian on Dutch Crunch. I also like the Italian salami. adding pepperoncini, oil and vinegar, provolone. Under $5 baseline for regular; $5+ for Special meats. Hubby likes the roast beef with Cheddar on sourdough roll. Great guys behind the counter - they always make my day. Cash only.

Eddie Sweileh, owner for 16 years of Freddie's Sandwiches on Francisco and Stockton, has posted in his window a Yelp.com entry that suggests a lurid act, then challenges him to "Print this out and put it in the window with your other reviews,...

I’ve never had a problem parking at Piccolo Pete’s. I usually just get something simple like ham or mortadella. My husband and I share a Godfather on occasion. I will say, I haven’t been there in about 6 months. The last couple of times I was there the bread wasn’t very fresh. Dutch crunch not really crunchy. That’s a bummer for me. I’ve been going to Roxie.