Be cautious of street cleaning-- I got a ticket while getting a (tasty) breakfast sandwich to go!

I stopped in to Constanso’s for a mortadella combo today. Delicious! Great soft roll and the price can’t be beat($4.75!). It might even have too much meat for me, though. I’ll request extra tomatoes and peppers next time to balance it out. I’m sure that wouldn’t be the case for most people. And the two men working there were totally delightful. I’m thrilled to support another small family-owned business.

Was that the “Wedgie” or the “Atomic Wedgie”?

I haven’t lived in the BA for a while, but I always liked Little Lucca. Pretty much anything on Dutch Crunch roll, with that great garlicky spread they use. Either the original SSF location, or Burlingame. http://littlelucca.com/

On the way to SFO, we will often pick up sandwiches to go for the flight - 1/2 crab 1/2 shrimp combo - on Dutch Crunch or rye.
Darby Dan
733 Airport Blvd.
SSF

I’m someone who doesn’t consider herself much of a sandwich fan (well, I still don’t “get” deli meat cold sandwiches), but I have plenty of feelings about this topic, particularly since the departure of Pal’s. I’m also not generally a fan of subtlety in food, but he did it well, and made me appreciate the perfect combination of ingredients.

I find it interesting they called out “The Balls” at Southie in the original article. I really like Southie in general, but the balls were one of my least favorites from them. Some of my favorites included their crab sandwich and pulled pork (not smoked or bbq, but rich, gelatinous porky flavor). Their meatballs seemed too solid, and the whole sandwich didn’t come together that well–the sauce remained a bit too astringent, and soaked the inside and outside of the roll, which was still difficult to bite through. Not bad, but I really like the meatball sub at Rotten City Pizza at the Emeryville border. The balls are soft and juicy, but meaty, the sauce is rich and deeply tomato flavored, there is the right amount off cheese to make it into a gooey calorie bomb, and the roll is my preference of ciabatta or similar that is moderately firm throughout, but still easy to bite. Their roast pork is also good–when I got it it had broccoli raab, but the current menu says peppers.

I didn’t expect to like, but really enjoyed several tortas from Casa Latina on San Pablo in Berkeley. The signs about how they use olive oil and not lard had me concerned, but their carnitas torta was quite good. Their rolls were a bit crustier than most bolillos, and the carnitas were usually crispy. I was never into their other menu items, but when I lived nearby I stopped by for a torta occasionally.

I also enjoy the French Onion melt from Steel Rail Cafe in Jack London Square. It’s a french dip with cheese and caramelized onions on Texas toast. Why not?

Toasted baguette has a banh mi rice flour bread-like texture. Torta has plenty of pork leg meat, onions, avocados, lettuce, tomatoes and a good kick from the jalapenos plus their housemade aioli. Its a tasty salt bomb. 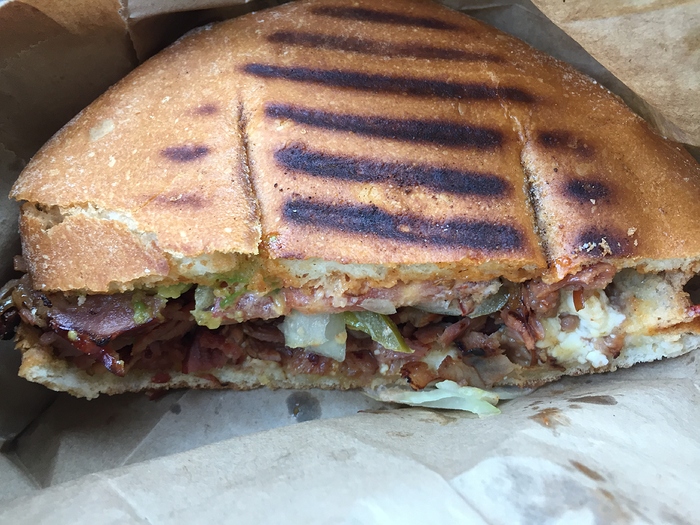 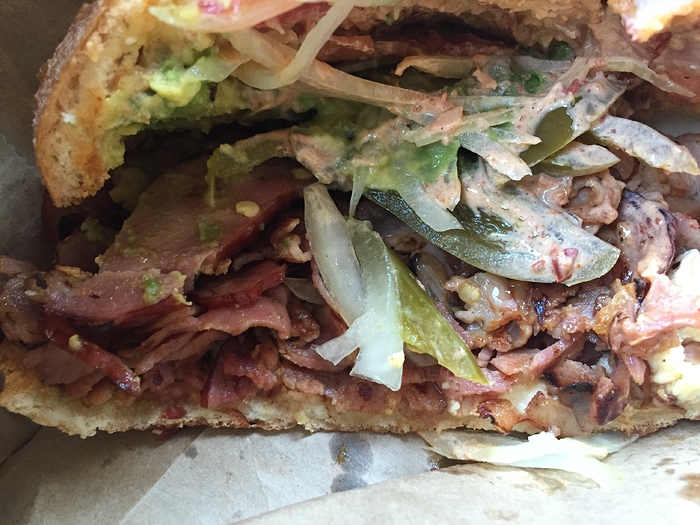 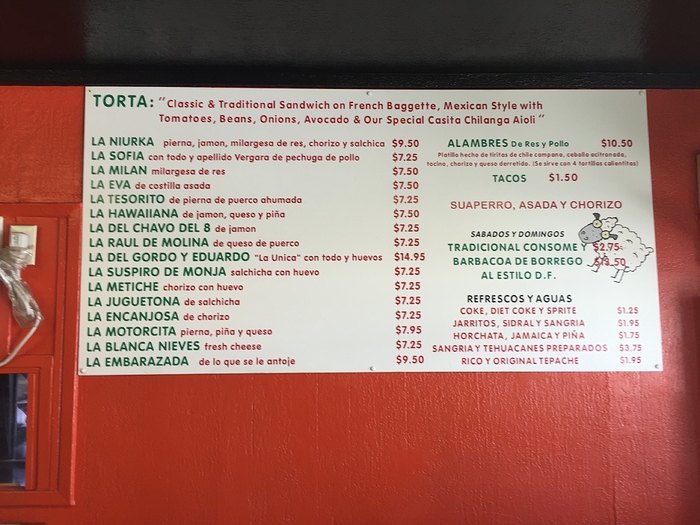 I had an acceptable pastrami from the Rye Project a while ago but one serious complaint is that when I asked for some horseradish I was told they didn’t have any. I pointed out that they had a refrigerator full. The response was that it was for sale by the jar only. (I’m sorry, Madam is not “at home” today.) WTF. Do I have to buy mustard and pickle too?

Being a schnorrer is not the formula for long term success in the service bidnez.

I wouldn’t exactly characterize the poster as a schnorrer for hoping for a little horseradish for his sandwich if they have it all over the place.

The poster is not a schnorrer, as we read the report to be describing a consumer’s view about value.

I wasn’t as big of a fan of the sandwich from Steel Rail. I felt the roast beef was a little slick … and I wanted the sandwich to be more pressed. The French onion flavor was good though.

Has anyone had the “off menu” lobster roll at Waterbar and if so, can you please comment?

AFAIK, it’s the only version I’ve come across in the Bay Area that’s done Connecticut style with warm butter on a toasted bun; at least from what I’ve read. I’m wondering if it’s worth a ride down to the Embarcadero for a lunch fix?

Funny, I keep responding to your questions…I have had it, it’s more bun than lobster but what lobster there is, is tender. I picked out the lobster with a fork and left most of the bun (it was tasty but I figured I didn’t need that much butter. Besides, had to save room for Waterbar’s great desserts). Very pricey but that’s par for lobster rolls. If you like lobster, check out the lobster salad at the downstairs bar at Liholiho.

How pricey is pricey; $20? Even in coastal New England, I’ve found that’s pretty par for the course these days, unfortunately. It’s too bad the meat to bun ratio is poor. I hate when restaurants are stingy with that considering it’s 99.9% of the cost of the sandwich.

Is it a straightforward no-nonsense lobster roll or do they fancy it up with extra garnishes? I’ve never had one served with the butter already bathed over top; usually you get a cup of drawn butter on the side.

Based on your comments, I don’t think I’ll make a special trip out for it anytime soon, but if I do find myself in the area around lunch time, I’ll probably stop in and request the butter on the side.

The butter is on the side (and on the bun). The roll was $24 including chips, I don’t remember any other garnish. I wish Waterbar would bring back their burger, which included soft shell crab. 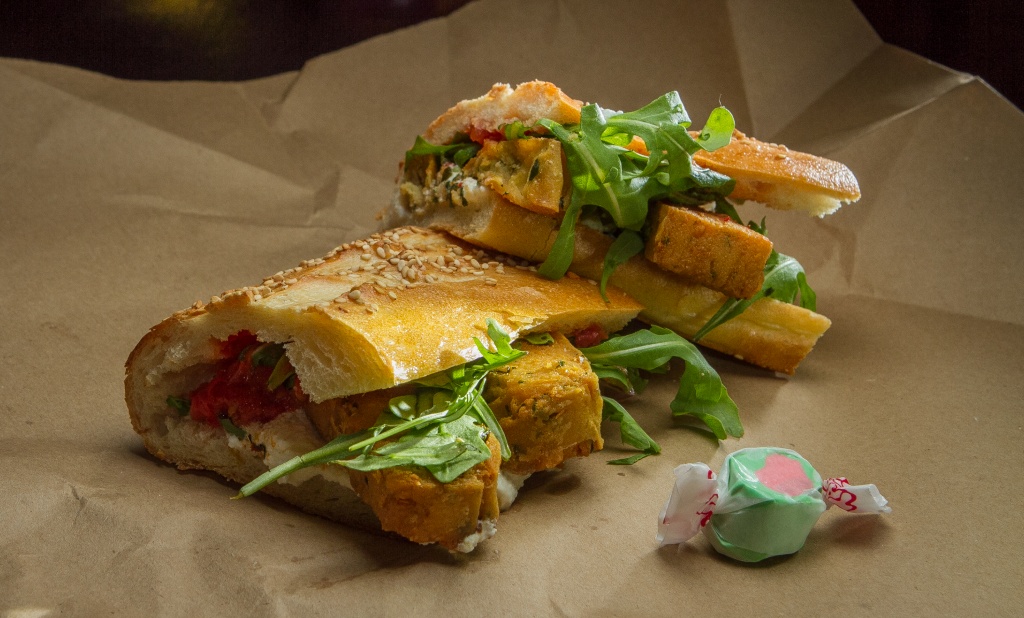 Merigan Sub Shop, home to some of the best sandwiches is San Francisco, is closing after service on Saturday, October 8. Chef-owner Liza Shaw opened the sub shop in the shadow of the ballpark nearl…

This doesn’t surprise me. I thought their bread was terrible and the sandwich descriptions always read better than they tasted. My office was around the corner and after being disappointed five times I finally gave up.