So has anyone heard any Intel? I see a few very suspect yelp reviews and it appears 4 one hit wonders out of 13 reviews. Does anyone notice all the reviews are very generic? Not one person really delves into a dish with any real review substance. Also, does it seem like this place has hosted a lot of large parties for so few reviews.

No website but there is a menu and photos on Yelp. Looks like it’s in the plaza with Bay Root. 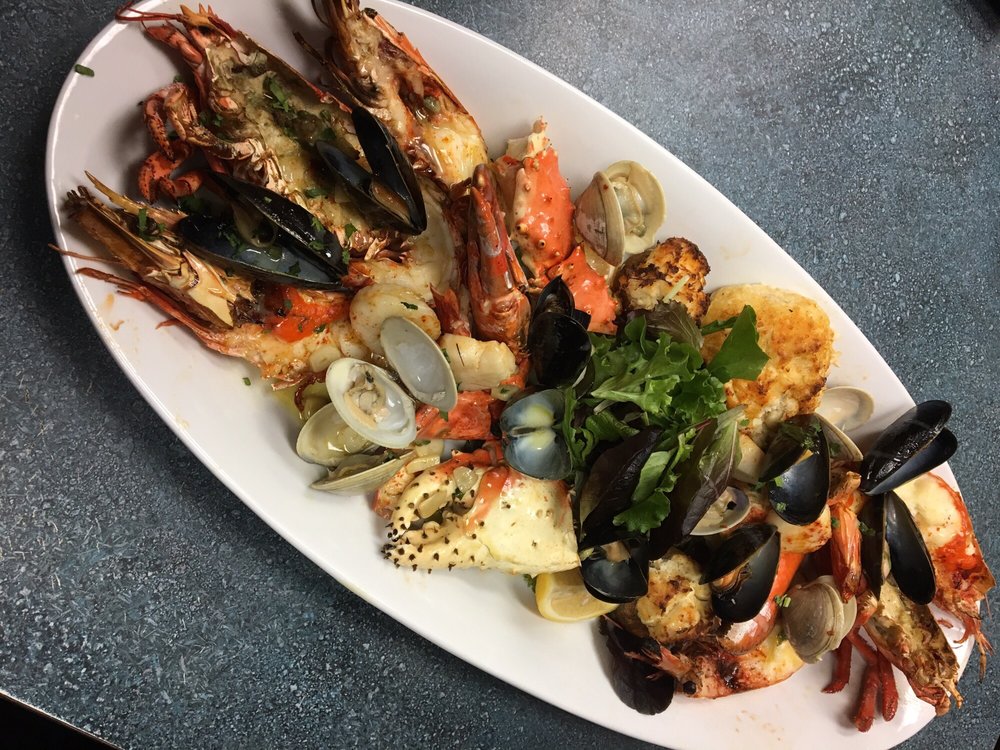 Pretty big menu for a strip mall place, everything from burgers to paninis to steaks to seafood. That always makes me nervous. The bigger the menu the more stuff they have sitting around for a while out back. Most of the photos are of steak and seafood.

WTF, it’s close, I’ll probably give it a shot.

Here is the big review from redbankgreen:

I’ll have to try this out. For 23 bucks a lobster and steak could be a decent deal, yet it could be pretty bad. It is always a craps shoot. I like the fact that they are truthful and market it as a pound. I can’t stand going to places that advertise 1.5lb and serve you a rat.

That hot app for two looks like it’s speaking my language.

So I read the reviews over. 36.4% are one hit wonders so far from 11 reviews. Does this place specialize in larger parties? It seems quite a few mention this.

I can’t stand going to places that advertise 1.5lb and serve you a rat

Amen brother. And then the rat is usually a squirter too, full of juice.

A 1 lb bug I’m guessing will give a 4-5 oz tail and a few measly morsels in the claws. They are almost better for making stock than eating.

Still some, as the Germans say, some hummer is better than no hummer at all.

I usually think that the bigger the menu the more of it is frozen stuff from US or Sysco. I try to avoid manufactured foods.

No it wont be nearly 5oz. A pounder will be like 2.5oz or even a little less, depending on the time of year when they shed. sad but true

Amen brother. And then the rat is usually a squirter too, full of juice.

A 1 lb bug I’m guessing will give a 4-5 oz tail and a few measly morsels in the claws. They are almost better for making stock than eating.

Exactly. Or a risotto

So anyone been here…or Bayroot in the same plaza?

We went to Bayroot for lunch a couple of months ago and got the shish kebab lunch. The shish kebab was okay, but the quantity was a bit skimpy; the shish kebab at Kebabery on Route 27 is better and a much better deal. (Yeah, I know–if you’re in Shrewsbury, you’re not going to drive to Franklin for lunch.)

The Bayroot thread is here, although it’s a tad light–and it appears I never posted about my experience there…I’ll fix that.

Just saw a few Instagram posts from this place, which I had read about somewhere and followed. Haven’t been yet, but the photos I’ve seen are certainly enticing. Anyone familiar with the place? www.bayrootmarket.com

OK, first off you wouldn’t know it existed……it is in a small “shopping center” on the east side of Shrewsbury Avenue, just south of Patterson Avenue in Shrewsbury. We had the same concerns expressed by others due to its extensive menu, but decided to give it a shot on a Thursday evening.

The place is fairly large, seating over 100 in the main area where we sat and another 80 in a banquet room which is opened when needed (apparently quite often Thu-Sun; however tonight was an exception according to our server…he said it was usually packed Thu thru Sun). Nice décor, nothing fancy but nice. BYOB.

Very attentive and pleasant staff. Got bread right away with some nice olive oil. Didn’t even need to ask for a beer glass……waiter bought it when he saw I had beer.

The menu is extensive (no specials but have a steak night and a surf and turf night early in the week). We talked about how can they do this……how have so much on hand and how does chef know how to prepare all the stuff on the menu? Frozen? Pre-packaged?

My wife got garlic shrimp ($11.95) for appy and chicken francese ($16.75) for entrée. Although she loves fish she decided to shy away from the fish entrees. I had pasta e fagioli ($4.95) for appy and veal saltimbocca ($20.95) for entrée. Waiter informed us that we also get salads with our meals….I got blue cheese dressing, wife had red wine vinegar.

OK……our appys were very good. The shrimp were very tasty and was big enough that I shared quite a few. My soup was good….not to the levels of many others I have had, but again good. Our salads were a good size that had assorted greens, onions, tomatoes, cucumbers, carrots, olives…….very fresh! As we were eating a runner asked if we needed more bread….yes we did. The entrees were a large portion and we both were surprised how rather good they were. Again we are not talking, say Giorgia in Rumson or Angelicia’s in Sea Bright levels here, but very good. We both had about half of our entrees doggie bagged as we were stuffed.

All in all we were pleasantly surprised. A good place for a basic dinner out….good food, excellent value, attentive staff, nice décor. Would be a good place for a large family as everyone could find something on the menu.

Good to hear you enjoyed it. That menu is indeed pretty extensive. I am definitely going to try it out. It would be cool to get a large group here to try out some different dishes

Think it would be great for a large group. Remember not talking great, knock your socks off food, but rather good food at an excellent value. Will wait your review. Enjoy.

I’m a big garlic shrimp fan. Do they compare to any other Portuguese spots that you like?

We both thought the garlic shrimp was good…I suppose we gauge the dish by the shrimp size, shrimp taste, if the shrimp was cooked correctly, garlic level and hopefully the shrimp not lost and soggy in a sea of sauce. We thought the shrimp was cooked correctly and with just the right amount of garlicky sauce. But to be honest we haven’t had garlic shrimp for quite some time and never locally so we probably aren’t a good gauge for you. You got me thinking that probably last time was at Tony Da Caneca in the Ironbound many, many years ago.

We decided to go back to the Europa Grill with another couple since we had been pleasantly surprised on our first visit. We went on a Thursday around 6:30pm and it was probably 75% full. Our waitress, R, was great and anwered all questions regarding the menu. Since the entrees came with a “house salad” 3 opted for no appetizers. I did get a bowl of Pasta e Fagioli. I ordered Veal Francese…the other orders were Chicken Francese and 2 Shrimp & Scallops. My soup came first and the bowl was huge. I have had better but it was very good. Our salads were fresh and tasty with assorted greens, onions, tomatoes, cucumbers, carrots and olives. The 2 Francese dishes were very good and a nice portion…both had 3 big pieces of perfectly cooked veal and chicken. The ladies said their shrimp and scallops were cooked just right and the risotto and vegetables the seafood was served over were also very good. All in all, everyone was very satisfied. The dessert tray looked really inviting but we were all full. Total bill, without tip…$95. Bottom line…nice venue, excellent service, good food, BYOB, very reasonable price and extensive menu.

I was thinking about trying it out tonight. I hear they have a menu now where you can cook on a stone. I read it on their website. I’m not sure if it is a stone or a tile like they do at some of the other places. Either way, a piping hot steak in front of me sounds delicious. Also, I saw they have a 24oz ribeye with half lobster special on the weekends. That sounds interesting. @NotJrvedivici

Haven’t been back since last post but thinking about another visit in the coming week or so. Curious to know what you think if you go.