Dried tomatoes - the best way to prepare them?

I love dried tomatoes from Italy, I find they are the best when bought in bottles soaked in oil. At times I bought the dried version, as with some suggestions, I soaked them in hot water before use, I find them losing too much taste when compared to the bottled version.

I haven’t tried soaking in olive oil yet. Which is the best oil to use? Do you add aromatics and what is your procedure? How long do you need to wait? Thanks in advance.

Just make them. In the oven:

Quarter lots of ripe toms and mix them up in a bowl with a good splosh of olive oil, salt, pepper and maybe a little sugar. Add some roughly chopped garlic (I don’t bother to peel) if you like, and any fresh herbs that you have. Lay them cut side up on a shallow baking sheet and roast at about 275/300 for a couple of hours. You might want to line your baking sheet with foil or baking parchment.

The flavour becomes pretty concentrated and they’re delicious hot or cold, and will keep fine in the fridge covered in the cooking oil for a few days.

I prefer the method discussed here:

I raise tomatoes for sun drying. I do about 1000 to 2000 lbs a year which I sell to the upscale restaurants in Cody Wyoming & Billings Montana. I wanted to pass on my favorites for you considering doing some drying. Any tomato can be used for...

I know exactly what you mean! This process looks like a good way to rehydrate them , I’m thinking that rehydrating and then storing in olive oil overnight or a few days would be a significant improvement over the just soak in hot water method 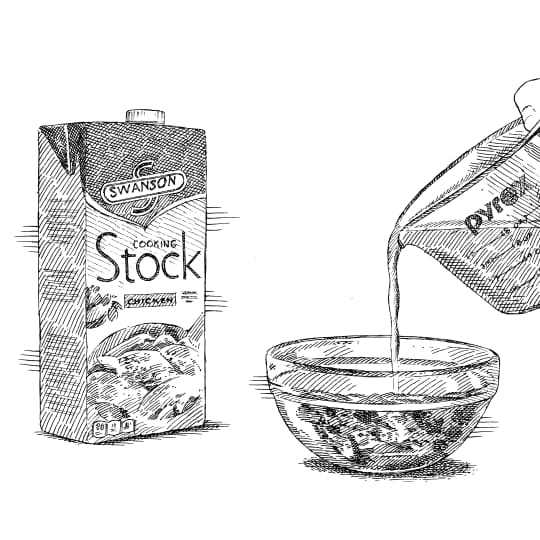 @Ttrockwood
Looks like soaking in oil takes weeks, better plan ahead. I never tried broth, can be an option when in a hurry.

@WeezieD The vinegar trick seems essential. And no garlic. Thanks for the method.

@RobinJoy As from making from fresh tomatoes, I envy you, I don’t have an overwhelming production from my garden as I live more in the north (Parisian region), so I like them fresh instead. My MIL lives in the region of tomatoes (SW of France), maybe I can ask if she can give me some to try drying them myself.

It can only last for a few days in the fridge?

I just buy the best I can find.

I’m no expert on food preservation, but a few days later they taste fine. Just one thing though: I suggested including some garlic, and I don’t know if the dangers of raw garlic in olive oil are still an issue with garlic that has been cooked in with the tomatoes and oil for a couple of hours.

Also I usually make them with a specific meal in mind (maybe a day ahead), rather than to keep for future use. This means two or three pounds only, which will all get eaten pretty swiftly, so storage doesn’t really come into it.

Great topic! I was researching how to sun-dry tomatoes yesterday, my cherry tomatoes are out of control , and there are lots of bigger tomatoes on the way,

I am going to try the old-fashioned way first, which is basically placing the tomatoes on a screen, cover with cheesecloth, then leave in the sun for a day or two. I’ll be taking them inside in the evening to prevent mold from the overnight coastal mist. I’ll report back.

I very much like the method you posted, @WeezieD, that will be my next tomato project, thank you!

When I want to do tomatoes in oil with garlic, I blanche the garlic in vinegar.

Love the wine soak method, have done it for the past couple of years. I dry some to a leathery stage and some Very dry and crispy. The crispy ones are great for crumbling onto winter sandwiches, salads etc.

I had a pizzeria customer who made the best sundried tomatoes. He put them up on the hot tar roof in Brooklyn. People still talk about it

I use dried tomatoes in a Persian style pilaf (polow), usually with dried sultanas, currants and/or golden raisins. Add them to the stock when you are cooking the basmati (a few threads of saffron is optional). Then fluff with a fork, add chopped almonds, fresh herbs, EVO and butter, and bake in an oven dish till you get a nice crust.

It’s similar to an Indian biryani, and is usually served with kebabs or various stews (horesht) including lamb, goat or lentil stews.

Following up on my earlier post, I made a test batch, and sun dried tomatoes are great!

I halved some of my never-ending cherry tomatoes, placed them on a sheet pan with rack, lightly covered with cheesecloth, and put them out in the sun every day for three days, bringing them in overnight.

As a control group, I also dried tomatoes from the same picking, and oven dried them.

The sun dried tomatoes were noticeably better. So sweet and chewy and flavorful! I was surprised at how much better they were than than oven-dried tomatoes.

Only small issue is that they stuck to the cheesecloth a bit, so I had to peel them off, but that’s okay, they are worth it. 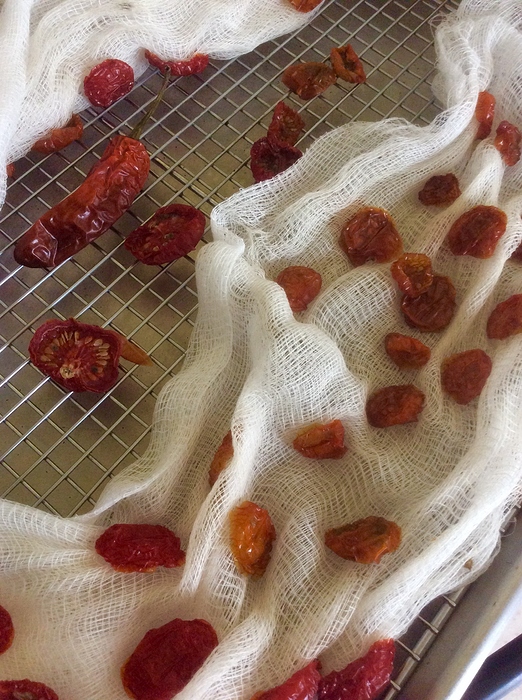 Thanks for reporting back, interesting results between sun dried and oven dried. I would have thought the result would be similar. Now your success urges me to do a small batch of cherry tomatoes probably next week, when the rainy/cloudy days will leave us.

Did you add salt or spices?

I saw you have a cute chili too!

Quarter lots of ripe toms and mix them up in a bowl with a good splosh of olive oil, salt, pepper and maybe a little sugar. Add some roughly chopped garlic (I don’t bother to peel) if you like, and any fresh herbs that you have.

I’ve never tried with a little sugar. That’s a great idea! I’ll have to try it next time.

Not exactly sun-dried tomatoes but related… If you don’t like tomato peels, I like what Thomas Keller does to remove them for his tomato confit. Dip each tomato in hot boiling water and remove the peel before seasoning and baking.

No, nothing. And yes, I have three chiles so far, so I dried one, for fun.

Nice!! How exciting to have your own sun dried tomatoes!

My original post was about buying dried tomatoes and method to rehydrate them.

After seeing several of your posts and @bookwich 's success, I was asking myself why not try to do a batch too!

So a tray under the sun now. With the orientation of my place, I could have only half a day sun each day. So I think 3 days might not be enough. Also, I am not sure about the weather for the day after tomorrow, maybe they need to finish off in the oven. Let’s see! 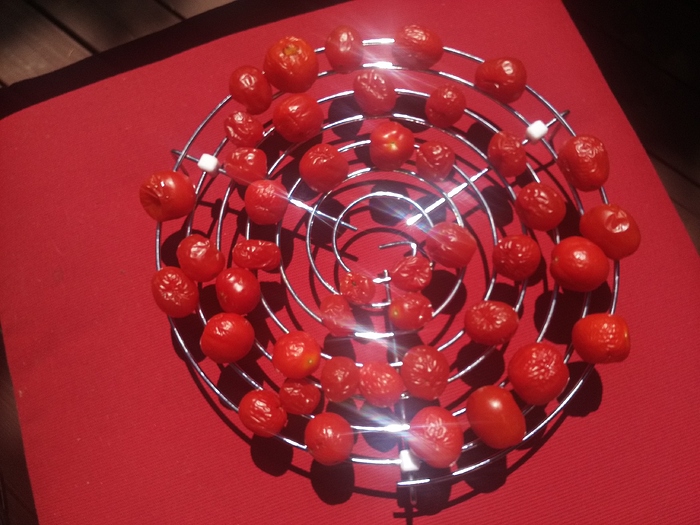 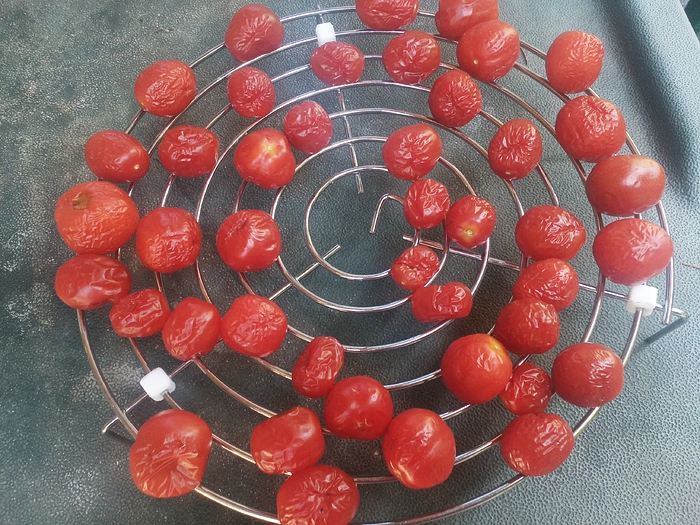 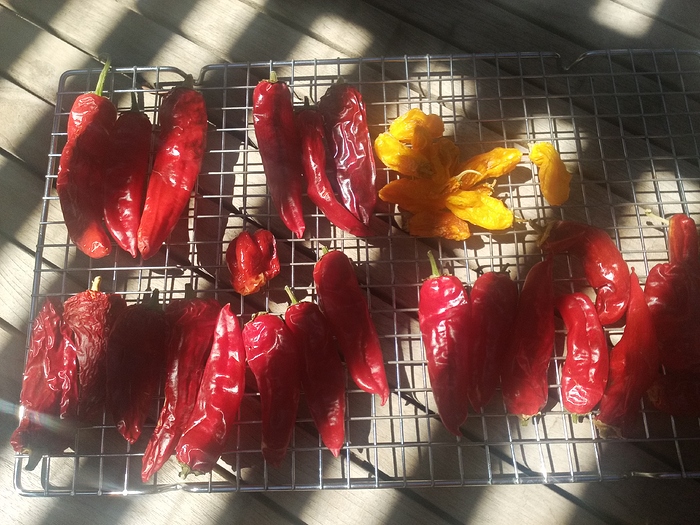 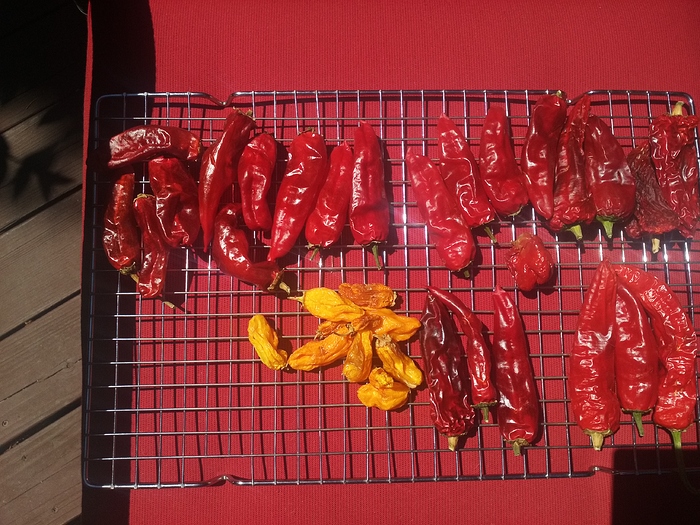 One link says " * For fridge storage : keep in mind that these tomatoes still have moisture inside them so if you just put them in a container in the fridge, they will get moldy after a few days. If you want to keep them in the fridge for longer you’ll need to fully submerge them in olive oil (add some herbs if you’d like)."

Not easy to tell the dried from the semi dried recipes. 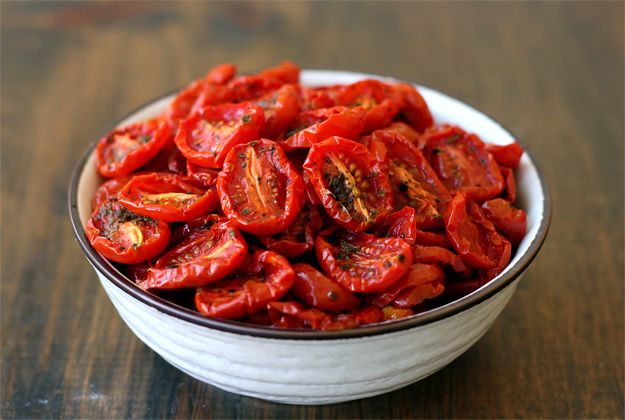 I prefer semi-dry tomatoes to fully-dried ones since they are a little softer and moister and therefore a perfect addition to grain salads, pasta, or pizza. You can use any size – from plum to cherry/grape tomatoes. Just keep in mind, the larger they... 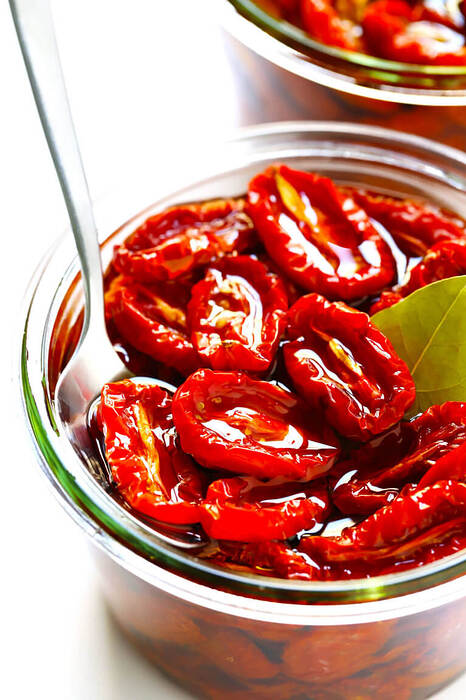 This homemade sun-dried tomatoes recipe is super easy to make in the oven and irresistibly delicious. Trying to figure out what to do with that end-of-the-summer bumper crop of tomatoes from the garden?! Make a batch of sun-dried tomatoes! ♡... 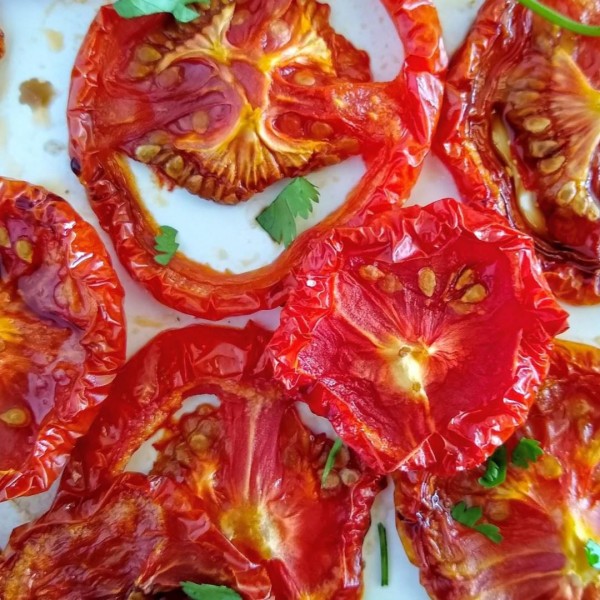 How To Make Semi Dried Tomatoes In Your Oven

Make these delicious slow roasted semi-dried tomatoes today. Slice up your tomatoes, stick them in the oven, and be prepared for a treat. 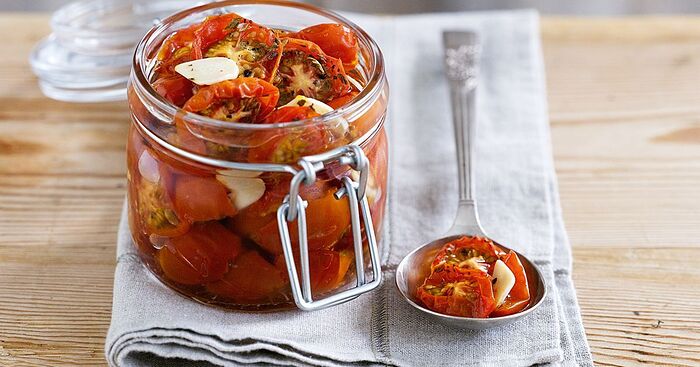 Homemade antipasto gives barbecues, dinner parties, picnics, and even sandwiches that special touch. You can enjoy this Mediterranean classic in so many ways!