Do You Use a Chinois?

Have been reading the mortar & pestle thread which caused me to wonder about chinois usage.

I have 2 sizes & love them both. Mainly used in the summer to get seeds out of berries or tomatoes that I can.

Would like to know how you put them to use in your kitchens?

Washing berries is #1 for me. Draining yogurt (using a coffee filter to line the strainer) or grated/sliced vegetables is my second most frequent use.

My Aunt gave us one when my wife started making jams. Plenty of good uses.

I use muslin bags for making strained nut milks and large batches of Thai tea.

I have two. One is very fine mesh, the other the holes are more of a collander size.

I use a chinois most frequently for straining stock. I line the chinois with a disposable paper filter make the stock clearer and for easy cleanup.

Even though the stand and strainers are large and hard to store in my kitchen I wouldn’t want to be without them.

I have to admit, I don’t own one. I saw chefs here using them frequently in professional cooking. My stainless steel sieves with fine mesh are doing the job fine. I thought of getting one in the past, but I found it occupying too much space and is doing more or less the same thing as a strainer. For kitchen tools, I’m a minimalist, prefer only to keep the essentials.

I have one, a stainless, not superfine mesh. I use it mainly to strain stocks or anytime I need to strain out seeds and pulp–the shape helps for mashing. My food mill does as well, but with more clean-up hassle. Really a good fine-mesh colander would serve for most people.

Agree on a fine mesh colander for many people, but for bigger jobs the 2 chinois are a lifesaver for my hands… I can grind away for hours and save the wear & tear on my hands. Maybe it’s therapy too?

I have but rarely use the food mill. Doesn’t seem as efficient.

I inherited a very nice one that i use approximately twice a year when I’m trying to make a super silky soup or sauce. It’s a serious PITA to get it clean. I only still have it because it’s not in good enough shape that i would donate it

I use a brush with fairly long bristles & they clean up pretty easily for me. My mesh is probably not as fine as some & the other one has bigger holes & is great for deseeding the Himalayan Giant blackberries that grow in profusion around here. I then use the pulp for jams and sauces. Went into a canning mania this fall & used the heck out of them.

Got a great laugh out of you being too embarrassed to donate yours. We redid our entire kitchen 2 years ago - knocked down walls & changed everything. My designer urged me to donate the old kitchen ware to her friend’s charity & was crestfallen when I didn’t… I was worried that her friend would tell her about my old crap. It went to the local Goodwill.

I have a smaller one that I use to also strain herbal teas and other beverages to get out much smaller bits of stuff, but I’ve used as well for straining yogurt.

I forgot I have one until you started this thread. I found that my mesh strainer worked better and fit my drawer better so I put the chinois in a box with other rarely used items. I just googled Chinois and I think I bought the wrong type. Mine is not a fine mesh but more like a cone shaped colander but with much smaller holes. The holes are just big enough to fit the very tip of a tooth pick. Too big to catch berry seeds. I can’t even find a picture of what I have. Maybe I would have found a finer mesh one more useful.

Yours sounds like mine w/bigger holes. Perfect for big blackberries, even frozen ones from Costco. Have to use the finer one for raspberries, but it doesn’t catch all the seeds. So if I want NO seeds I’ll put it in a smaller mesh strainer or line the chinois with cheesecloth.

Do you have a large wooden pestle that goes with it? That is the key to it’s efficiency.

No, I don’t. I did not know that I needed one and can see how that would make it work so much better. It’s all coming back to me now. I tried using a rubber spatula like I do with a strainer but it was a pain and I wondered why this “contraption” was suppose to be better. Maybe I will try it with the pestle that came with my mortar which is pretty big. If it proves useful I’ll search out a lighter wooden one. I hate having stuff laying around not getting used. Thank you.

Hm. I use mine mostly as a flour sieve when making bread or pizza dough. To refine the flour remaining on the kneading board. I sift it onto a corner to use during the next or shaping step.

For most of the broth straining functions I use cheesecloth in a strainer.

For super smooth purees, I just blitz them in my ancient but super powerful Osterizer.

On further reflection, your chinois actually sounds like the smaller holed finer one of mine. It should get about 90% of raspberry seeds out and 100% of blackberry seeds. You can then strain through cheesecloth to get anything remaining. I prefer the large rounded end pestle over the one with a sharp angled pointy end. If you’re processing large amounts of anything it is really a time and hand saver.

I tried using a rubber spatula like I do with a strainer but it was a pain and I wondered why this “contraption” was suppose to be better. Maybe I will try it with the pestle that came with my mortar which is pretty big.

I use a ladle to push things through the mesh. The bowl of a 2 to 4 oz ladle fits nicely.

I have to admit, I don’t own one. I saw chefs here using them frequently in professional cooking. My stainless steel sieves with fine mesh are doing the job fine. I thought of getting one in the past, but I found it occupying too much space

I am at the same point. I have often thought about getting one to strain my soups, but I’m doing ok with my strainer. And I can’t think where I’d store it. I do want one,though!!

Talking about strainer, when I’m making a fish broth, I put all the bones and heads inside a big ball strainer inside a pot. Also use a smaller ball strainer for soup with lots of spices that need to be separated afterwards. Maybe another reason that I don’t need a chinois (yet). 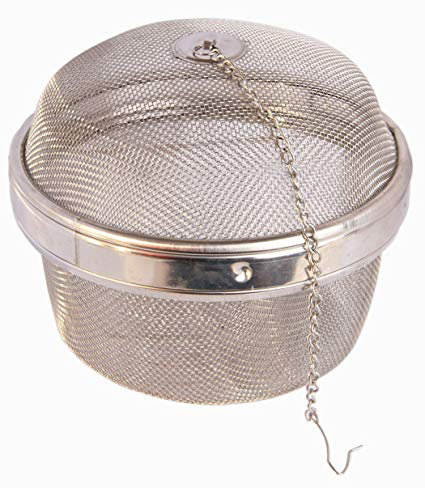 How big is that? I’d like something about 10" in diameter for making vegetable stock.

I’ve never seen a ball strainer large enough for something like that . . . . source?