Do you have any damascus kitchen knives?

That was then–this is now.

The Chinese at Yangjiang have been partnering with many countries, including Sweden, Austria, and Japan, while improving their own steel–most recently marketing their own designer knife with powder steel: 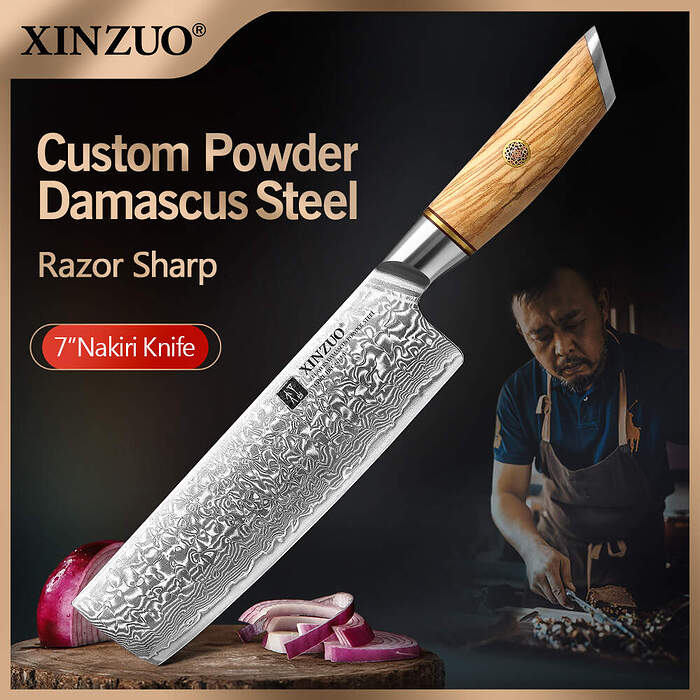 Three years ago, when I did a review of the Shan Zu gyo, we were wondering whether or not they could credibly market a $100 chef knife. Now, it’s closer to
$200–and they are selling: 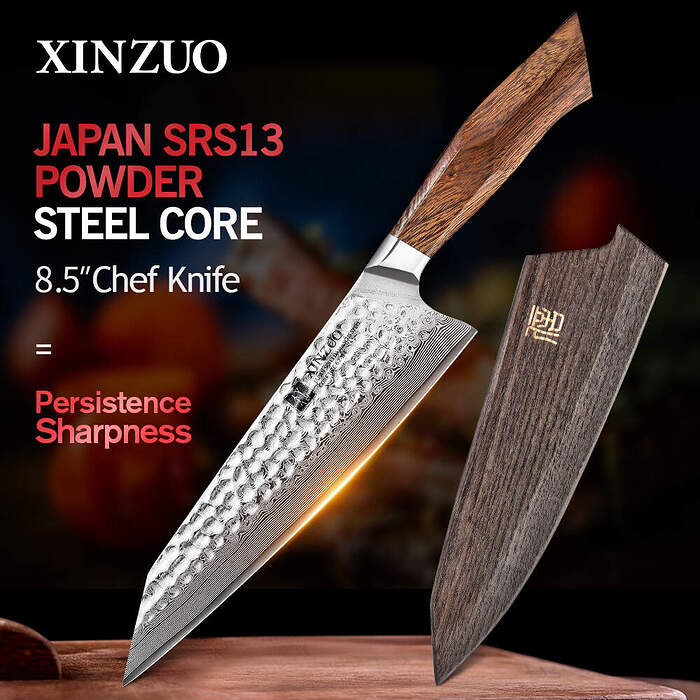 I try to avoid products made in China and Russia for political reasons, not because I think chinese knives are better or worse than Japanese made knives.

I did make an unfortunate purchase buying two Fissler Pro frying pans some while ago.

I could not find any where on the pans or the box they came in, where it was stated where the pans are made, and I actually thought they were made by Demeyere in Belgium.
I have now realized they are made in China for Zwilling - the pans perform terrific and I’m not throwing them out because of where they are made - but I still try to avoid buying things made in China the best I can.

China can make excellent high quality products, when they need to or want to - just look at Apple iPhone and Volvo, but I do my best to avoid these products.
I also use Gilette DE razor blades made in Russia, and I’ll use what I have up, but after that I’m buying DE blades made in Germany or Israel probably, not made in China or Russia, that’s for sure.

I’ll never buy a Chinese made kitchen knife, that’s for sure.

I don’t know anything directly about knife manufacture and marketing either in China or in Japan, so I rely on collaborators who do. My Japanese collaborator typically spends one day a week with me at my home where we can try out knives together and he can teach me how things are done in Japanese restaurants and homes. He goes back every two or three years.

My other collaborator is directly involved with Chinese manufacturers and representatives, tests their knives, and has even recently been to Hong Kong.

I now have purchased five Chinese kitchen knives that have all performed really well. I also have purchased six Shun knives that are grabbably close in my kitchen, as well as another four I’ve shared with family and my collaborator. My Shun experience dates from receiving a KAI Seki Magoroku in Japan more than 30 years ago.

I can compare them directly in my home kitchen. I can also follow Japanese and Chinese knives remotely on my computer with further feedback from my collaborators. There is no doubt that my most recent Chinese Xinzuo kitchen knives perform very well even as the price point spread compared to Japanese competitors grows.

I’m interested in evaluating them in terms of cultural fusion–especially here in SOCAL, where cultural diversity in cooking is a breeding ground. Shuns remain the standard for Japanese American fusion (for me), but my Xinzuo knives are catching up. Their weight, feel, and profile seem Americanized to the point that they are almost interchangeable with my Shuns.

Still, with my birthday coming up, I’ve managed to “steal” a Shun Fuji Chef knife I’ve been curious about for five years–hopelessly out of my cost/value proposition until Ebay helped out. It’s always been my dream for what a Japanese-American hybrid Chef’s knife should be . . . 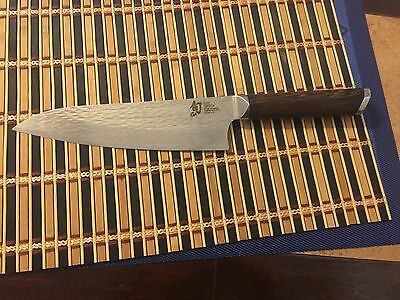 Here’s a demonstration of how to make a multi layered damascus billet: 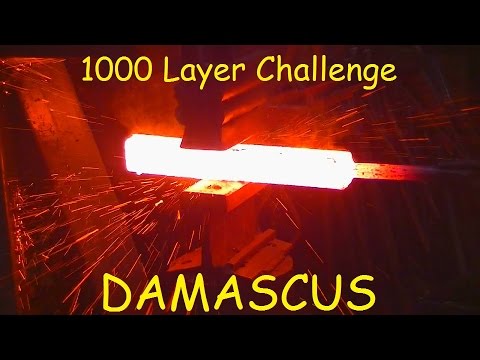 P:art 2: turning the billet into a damascus replacement blade for an Opinel paring knife: 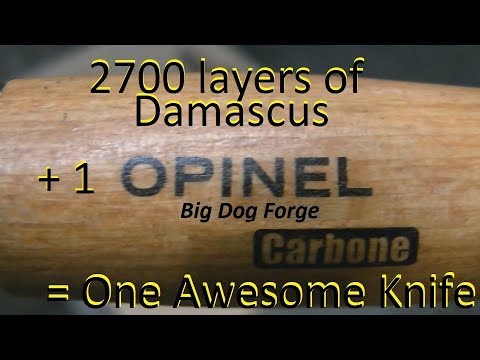 These two videos together show how hand made damascus knives can be made. The challenge that Shun and Xinzuo met with dual core was to make and replicate a specific design. 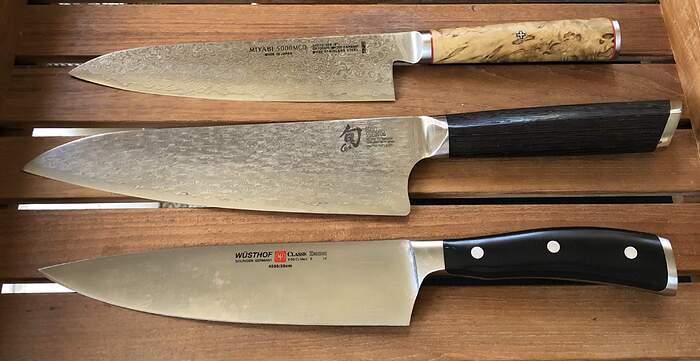 For more than 5 years, I imagined having the Shun Fuji as my batterie #1 Chef knife, with the Wusthof Classic Ikon as the batterie #2 Chef Knife for dense roots and all kinds of chopping.

Unfortunately for me, Fuji has been an exclusive at Williams Sonoma–The 8.5" Chef has been priced more than $200 too high all these years.

The Miyabi Birchwood (above) remains my sharpest knife–a near laser gyuto–light weight and angled at about 11 degrees.

Once I have a chance to try it out, I’ll make a report.

I’ve been fascinated by the KAI Shun experiment, both as a business venture, and as an attempt to bring Japanese and American food cultures together through kitchen knives. Have they developed one or more Japanese American fusion Chef knives for the American kitchen?

More broadly, a Japanese Western fusion may have already happened. After all, the Japanese decades ago developed a double beveled gyuto based on the historical French Chef’s knife–a further fusion called "American’ would just be for marketing purposes. Zwilling went with such thinking with the Miyabi line, marketed side by side with their own established German lines in Europe and America. They added an American component by arranging to manufacture and market Bob Kramer’s designer line of knives along with their Miyabi.

KAI took a much more daring approach, focusing specifically on the United States market–rethinking through a new “Shun” brand the home kitchen knife as a fusion of American design and Japanese “know how”

This older video, with the narration provided by the KAI CEO himself, presents SHUN as “almost hand made and exotic” side by side with “radical Ken Onion designs”–only revealing limited use of advanced manufacturing technology that was being applied to this new brand. This somewhat contradictory stance can also be seen in the designs.

Of all the profiles that Kai adapted to Shun knives, the santoku, successful in Japan as a Seki Magoroku, is, IMO the most consistently outstanding. The Kaji hallow ground santoku offers a slightly more substantial Americanized version that leaves a little belly near the tip while otherwise being flat. According to Japanese design, it was overweight, back heavy and unbalanced. For many Americans, gripped properly, it was just right.

It was my first “expensive” knife purchase, made affordable when I was able to purchase it on auction for less than half the retail price. It has been a workhorse for me—alongside my Seki Magoroku lightweight truly Japanese nakiri.

The Shun Fuji can be compared to many knives designed by Bob Kramer for Americans but not any artisan knives designed for Japanese, yet Japanese elements are there—beginning with the 161 layer textured damascus over an Americanized profile very similar to all the other Shun series, but with a wider base. The somewhat oversized tapered handle is neither oval nor octagonal, with novel gripping ridges for both right and left handed users and the usual Shun half bolster, but the material is dark tagayasan wood associated with Samurai sword handles.

I’ve speculated about the 8.5” Chef knife version of Fuji for five years—hundreds of dollars over my price limits—until I started following it on EBAY—dropped within range—successful negotiation. Success. Already arrived. After a few weeks of exploring—I’ve found my Japanese American fusion Chef’s knife to team with my Kaji fusion hollow ground Santoku. 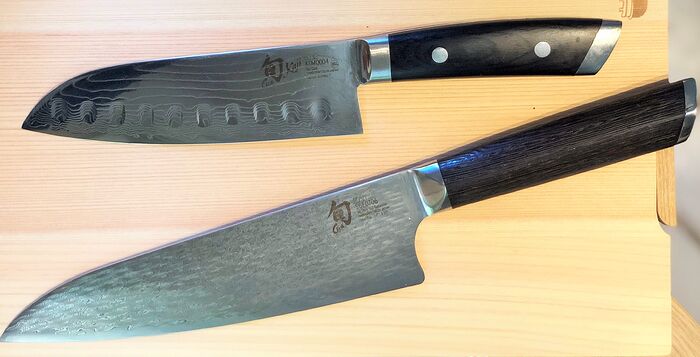 After 12 years on the market, why does this Fuji seem so new?

I have several German Schilling Four Star knives which are fine. However, love the Shun Kin Onion knives I purchased. They are a dream to use when cutting and dicing. Too bad they are no longer manufactured. I have not tried the newer Shun Kin knives.

Your Ken Onion is probably worth quite a bit. Some have sold on EBAY for thousands of dollars.

My 2nd generation Kaji has been a terrific knife and is still being manufactured.

OMGosh! I had no idea of the value of the Shun Kin Onion. I am protective of them, but will be more so in the future. I know my grandaughter dropped one of the small paring knives and the d…n tip broke off. I was truly upset. It is must have hit directly with the tip straight down of my cermaic tile floor.

Thank you for your experience with the Shun Kaji. I will definitely look at them.

In comparing my utility knives, I rediscovered the beautiful damascus of my two 6" knives–one by Kai Shun, the other by Tojiro. Both the patterns were perfect–no scratches–and subtle. When I first received my Kai Shun left handed serrated utility, I almost felt cheated–it seemed so nondescript. But it had a nice ridge in the wa handle for my left hand, and a serrated edge that turned my knife into a single bevel design. Took me several years to learn how to use it properly.

Now, I finally see it with all it’s subtleties, and appreciate that damascus that I took for granted at first: 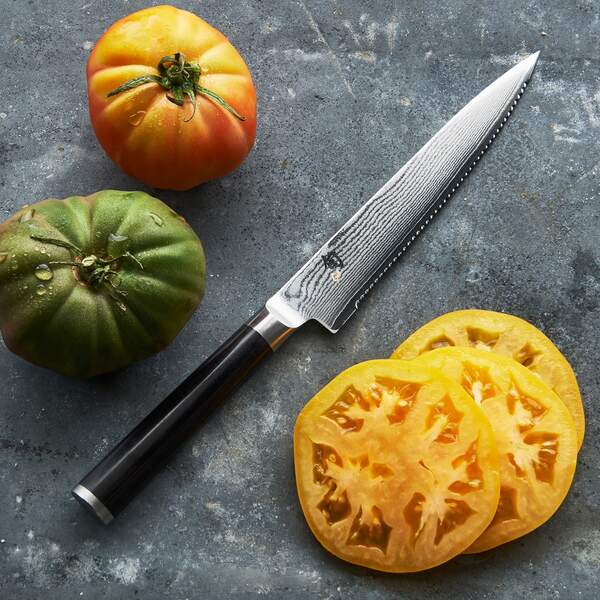 Well, sort of. Damascus blades of the highest order are quite expensive, mostly because they are handmade and exquisitely finished.

But billets of Damascus aren’t super expensive, and a myriad of patterns and layups are available for purchase. Some incredibly beautiful patterns can be had for around $20/inch (welded handle tangs of monolithic steel bring the cost down further). It’s when you want very complex mosaic patterns (e.g., 100 perfect US flags, including tiny stars) that the time and cost skyrocket.

You can also buy machine-welded “cored” sheetstock for less than a fortune. And even forge welding such a 3-layer blank is pretty simple for anyone who’s taken a blacksmithing tutorial.

I served jury duty with a retiree who got into making Damascus as a hobby. He gave me an unetched billet of a 256-layer “raindrop” pattern he’d done, large enough for a large folder or parer.

What you pay for in both the sword and Damascus areas in the market is the expertise and artisty–in every facet of whst’s required. And even if you buy from a case or through a dealer, you’re usually buying a complete one-off.

More of a chicken or egg question as I have 0 experience forging a knife.

So similarly in the construction of damascus knives, one would also expect that the tempering etc and quality of steels used will also result in different blade performance.

What is the most important step of the knife making process to ensure the highest performance?
Tempering
Quenching
Forging

What processes are entailed in the billet manufacturing stage?

Once a damascus billet is completed can a knifemaker further improve the quality of the steel in the end product?

Here’s a pretty good interview with a young knifemaker who describes the process quite well: 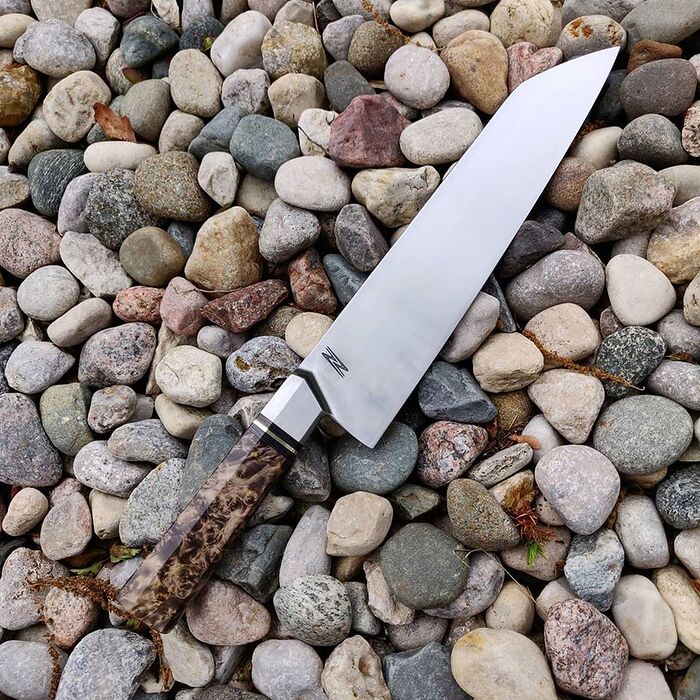 Nicolaides Knives are both gorgeous and functional.

Thanks for the link, he kind of skips past the technical aspect I was more interested in learning more about. Mostly dwells on aesthetic aspect of knifemaking.

Does anyone know where I can find a damascus burger turner please? 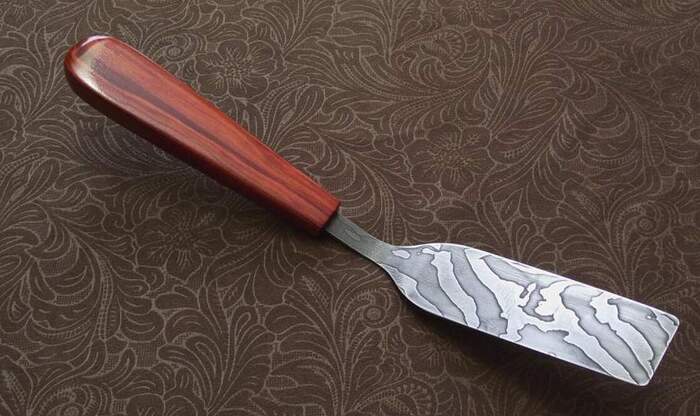