Do you grill/bbq in the winter snow season?

I mean…it sounds the opposite of seasonal cooking but I did it last weekend even when it was snowing a little - not because I love bbq and grilling outside (like a party) but because of the cooking method and flavor from the wood smoke. I can’t get that in a kitchen oven.

But the biggest reason I did so was the pricing. At Costco, my grocer, they had prime grade brisket for $5 a lb. OMG. Of course I got it.

It’s like 10lb but I’m going to smoke the point muscle and cure the flat muscle in pink curing salt for corned beef/pastrami later.

At my grocer, oxtail is cheap and available in the summer (because no one wants to eat hot soup in the summer) but now it’s completely gone in the winter (when everyone is drinking soup).

So I end up buying grilling meats at a great price in the winter (when grilling season is over) and I buy oxtail in the summer.

Like…I wonder if others cook out of season because of the incredibly favorable prices.

Is smoking included? I’m in! I smoked a pork shoulder a week or two ago in our version of winter; pouring rain. Lots of pork in off er around the New Year. 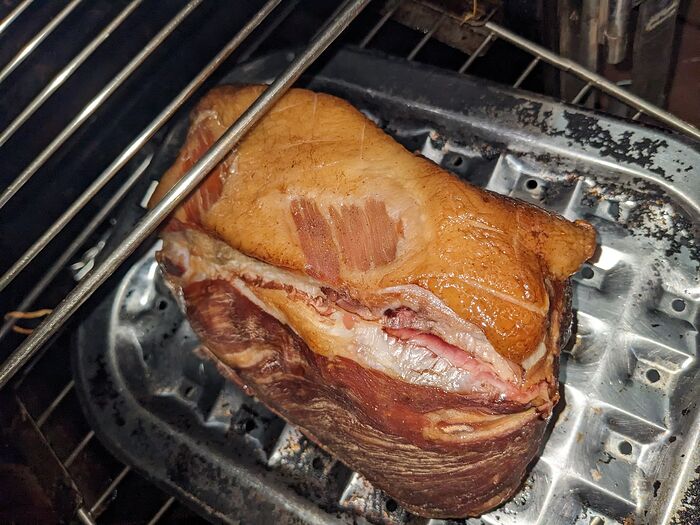 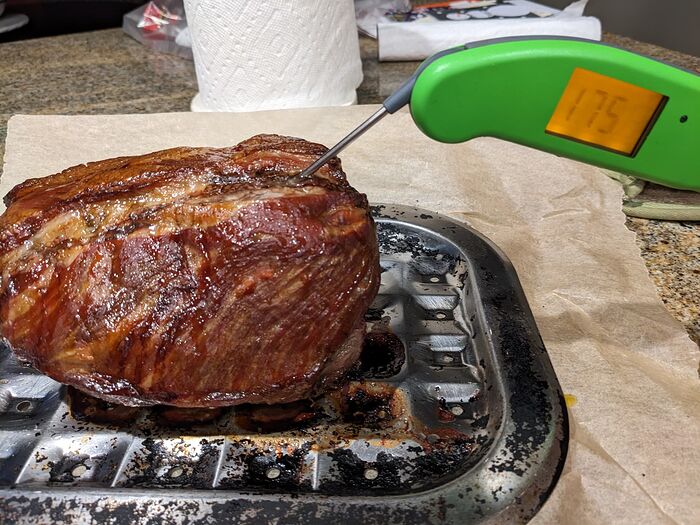 I should have let it go longer, but it was late and I thought I would enjoy it sliced.

I do
But our winter day time temperature is around 24 oC.
But cold at night, so smoking/grilling/bbq is a nice way to stay warm.
Summer is more of an issue. Just too hot at times

Per our condo association rules, our rig is electric, so, definitely not if there is snow or any active precipitation.

I grill out year round, but we only see snow maybe once per three years, and also while we do see some overnight temps below 32°F/0°C, afternoon temps are generally at least 50°F/10°C.

I do not see the seasonal fluctuation in meat prices that you mention experiencing. I wonder if it’s because a lot of people here do grill out year round.

I’ve got a bone-in pork shoulder thawing, that I was planning on grill roasting tomorrow, but my son just reminded me that I’m out of breakfast sausage so I’ll make sausage of it instead. And just suffer along tomorrow on grilled bone-in ribeyes instead!

Since I moved temporarily to the suburbs at the beginning of the pandemic, I’ve been hitting the grill very hard. I don’t have access to such a tool in the city, so I’ve really enjoyed cooking on it in basically all weather, all year.

I smoke year round, as long as there’s no snow on the ground (I use an electric). I don’t grill or do any other outdoor cooking, though.

Oh. Well -some places - like California has nice weather and no seasons throughout the year so I don’t think demand-supply of seasonal foods would affect the prices there that much.

But a sidenote. I do have a question about smoking that huge bone in pork shoulder.

I mean…the smoke only coats the surface of the meat - you can see the smoke rings to verify.

If i cut up the pork shoulder - like butterfly it or something, wouldn’t I get more smoke flavor since there is now more surface area getting that good smokey wood flavor?

I thought about doing that. This would change the cooking time to a lot quicker I bet.

Also, like a lot of bbq books say the temp needs to be like 202F for the pork/brisket to get tender. But I think that’s just part of the method. I mean, it’s not like you hit that temp 202F and then magically the meat gets soft immediately (like how bacteria is killed instantly at 150F).

I think the meat temp needs to hit a high temp 202F or something and stay that way for a certain time period for the meat to soften (like overnight sous vide). I think that 8 hour brisket/pork shoulder thing might just be best guess at how long the meat needs to say at 202F etc.

I cook my brisket for 4 hours only. It does hit that 202F mark and is soft.

like California has nice weather and no seasons throughout the year

For the record, that’s true in only parts of California. Not complaining though; always quite tolerable. A lot of rain this last several weeks, but still quite tolerable.

wouldn’t I get more smoke flavor since there is now more surface area getting that good smokey wood flavor?

I thought about doing that. This would change the cooking time to a lot quicker I bet.

Also, like a lot of bbq books say the temp needs to be like 202F for the pork/brisket to get tender. But I think that’s just part of the method. I mean, it’s not like you hit that temp 202F and then magically the meat gets soft immediately (like how bacteria is killed instantly at 150F).

Yes, you’ll get more smoke flavor if you cut the meat into smaller pieces. That may or may not be a good thing depending on your tastes. Pork is a milder meat than beef and can easily get overwhelmed by smoke, IMO. Also, if you are pulling your pork shoulder, you’re probably mixing it with its own juices and/or a bbq sauce, both of which are going to pack a punch of smoky flavor. So, proceed with caution.

As for the temperature, you are correct that tenderness is a function of time at a given temperature. Pork shoulder will become pullable at 180 if yoj hold it there long enough fot the collagen to break down, but that process takes longer at 180 than it does at 205. If you can maintain the pork at a lower temp (180-190) for a long enough time to get it pullable, you get a better end product than bringing it to 205 (IMO). BTW, pork cooked at a low temp (250ish) will generally be tender the moment it reaches 205, largely due to the amount of time it spends in the 180-190 range before it gets to 205.

As for the temperature, you are correct that tenderness is a function of time at a given temperature.

There are a few great illustrations of that online somewhere.
This one is from Serious Eats for "Sous vide barbecue pulled pork " I like some of this too, but it’s about roasting. 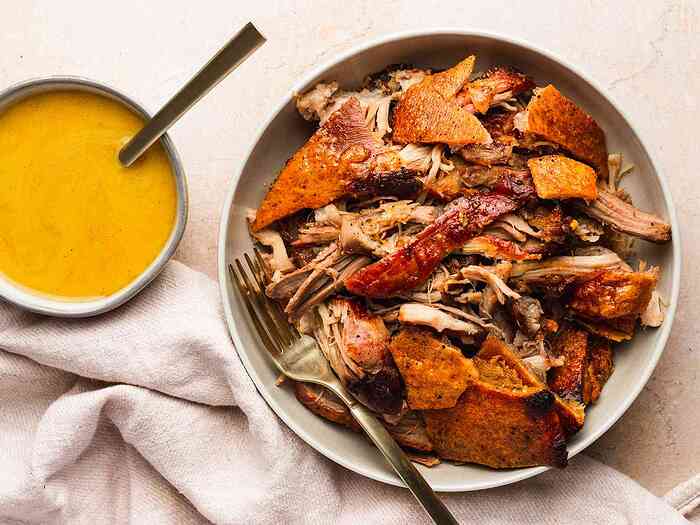 Pull-apart tender meat and ultra-crisp skin: slow-roasted pork may not be the most gorgeous looking, but the flavor more than makes up for it.

Yeah. I just got lucky, though. The grocer chain I shop at a lot had a glut of cryovac’d whole rib roasts and for just a 2 day period was selling them in the cryovac at $5.50 a pound. I’m buying a bit more fat than I’d get if they trimmed them, but still it’s a good deal, and a fair bit of the fat is the hard stuff I can use in sausage or grinds.

The wholes are back up to usual prices, around $16/lb, and the trimmed roasts (or bone-in ribeyes) are about $19/lb.

That happened at my local grocery store ( Lucky) as well, and I looked longingly at the piece the guy behind me in line got, but it seemed like it would take more than a year for me to eat that alone.

I love grilling out when it’s snowing.

I’m lucky when it comes to that, to have 5 meat eaters in-familia plus my 2 in-laws plus 2 old co-workers that I can pass off steaks to. My co-workers pay me back in venison treats, so we’re all good…

My dad would bundle up and do steaks for us on the Weber in the winter. Always!

I cook my brisket for 4 hours only

Good question. From my interpretation, he’s running it along at a higher temp, and so hits/passes/pushes through the stall more quickly?

If it works as described, I’ll try it.