We are looking for recommendations for good dim sum in Oakland. We are in the mood for dim sum but don’t want to cross the bridge to SF.

The main one in Oakland’s Chinatown is probably Peony Seafood restaurant in the Pacific Renaissance Plaza (second floor).

Dim Sum/Yum Cha One of the more popularly known versions of Cantonese cuisine is dim sum. Just select a pot of tea, grab a few items, and converse with family and friends over a sumptuous meal. Typically, waiters push trolley carts around filled with stacks of steamer baskets or small plates for customers to choose. Restaurants also serve dim sum by having diners select from pre-printed order forms. However, not all dim sum restaurants are sit-down; there are a few places that do a take-out sty…

It hasn’t been updated for at least half a year and I’ve been meaning to get to the other sections, but probably give that a glance if any other dim sum spots are easier to find.

I’ll repeat my recommendation from that discussion: East Ocean in Alameda is a favorite. It’s on Webster, not far from the tunnel. 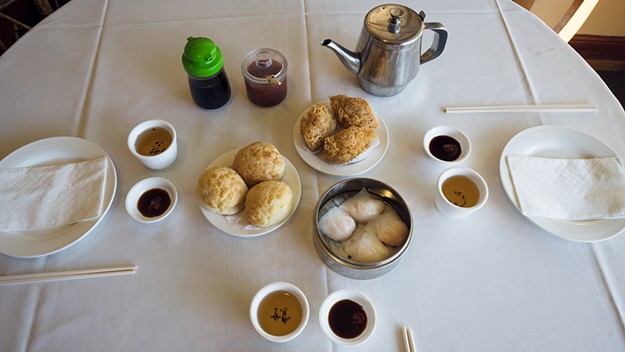 The long-running Alameda restaurant offers a variety of Hong Kong- and Cantonese-style dishes to please every palate.

We admit we’ve been underimpressed by Peony’s service over the years, and don’t really find their dim sum any better than other EBay places.

Alameda’s East Ocean’s dim sum took a half-step upwards about a year ago, and the crowds have increased as a result. Plus, it’s easier to park in Alameda than in Chinatown, LOL. There’s only a few dishes we don’t care for: one is the Pan-fried Turnip Cake (lo bak ko). Dull and too much riceflour. The Taro-Shrimp dumpling is too starchy for our tastes.

But most dishes are fine, including the Steamed Seafood Dumpling, Har Gow, Shu Mai, Shrimp Rice Noodle Roll, Deep-fried Taro Dumpling with ground pork filling. The bao are small and good if not exceptional. The steamed pork spareribs have the dow see added, which many dim sum places are now leaving out entirely.

We prefer East Ocean to Pacific Lighthouse/Alameda, as well as Saigon Harbor Seafood/Richmond. We do think that Mayflower/Dublin is a bit better than East Ocean, but EOS wins for service (most of the staff has been with the restaurant for years).

Mayflower was recently taken over by new owners (August 2019, I believe) and the dim sum has improved dramatically. We don’t care for Koi Palace/Dublin, mostly because I absolutely loathe their ordering system and don’t find their dim sum any better than the newly upgraded Mayflower.

Peony is one of the very few Cantonese restaurants that can prep a proper sub-10-pound suckling pig. Reserve one and try!