I haven’t traditionally been a big fan of Sicilian-deep dish-square pizza. I think some of the earliest ones I ever had were actually Bisquick Impossible Pies with pizza toppings which biased me for a long time. But I saw the recent article in Serious Eats about the best one in New York and that piqued my interest. Clearly, I’d never had a good one. 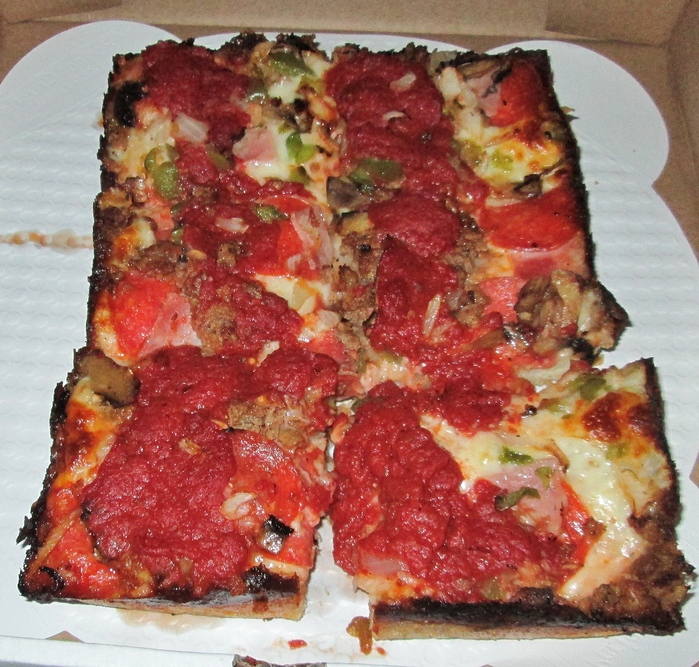 I checked out the offerings at Barry’s on Richmond @ Fountainview, which is known for their Sicilians. This was the Barry’s Special, Small, with pepperoni, mushrooms, ham, bell pepper onion and Italian sausage. I’ve been sampling lots of pizza lately and got this one to go; this was before I decided I really needed to eat-in to get these pizzas at their best. The best parts were the crust and the sauce; the other ingredients paled in comparison. The crust was like nothing I’d ever had before, crispy and crunchy. The dough was not risen as much as described in the SE article; this was a very dense, heavy pie. I could barely eat one and a third slices. I don’t usually like cold pizza, never figured the appeal of that out, but to my surprise this was pretty good cold. Good thing because I had a lot left over to finish off.

Sorry I didn’t get a good shot of the crust - I hadn’t realized how important that was going to be. 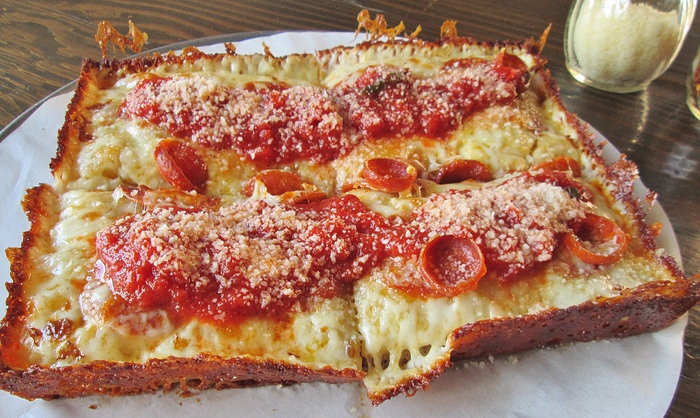 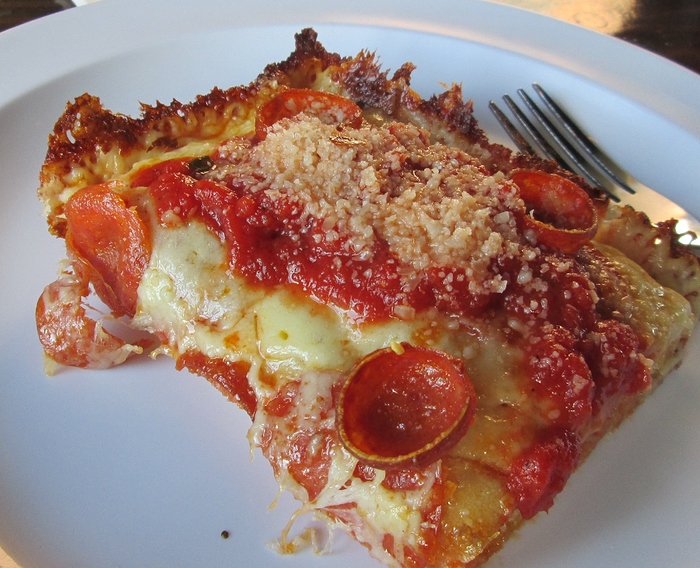 Today I checked out the new Detroit style pies at the Montrose location of Pizaro. This was the Motown with two kinds of pepperoni, ‘regular’ and ‘cupping.’ A full description was not give on the menu sheet and these are not yet listed on the website so I don’t know the other ingredients. There are supposed to be two main kinds of cheese - mozzarella and Wisconsin brick. This was very oily and very good. It is smaller and a much lighter pie than Barry’s; I was able to finish 2 pieces (and only slightly regretted it later). I understand, however, the pepperoni should be under the cheese on a true Detroit style pie.

The sweetness of the sauce on this really surprised me. The crustiness was wonderful but didn’t extend to the underside of the pie as much as Barry’s - much of the center of the pie on the underside was soft.

There are five varieties of Detroit pies on the menu.

These are both good pies. I really liked the crust on Barry’s and maybe have a slight preference for the sauce, too. I wish the other ingredients were a little better quality.

So - what else is there? Had any good Sicilian pies in Houston?

Oh my those look good.

Yes, Detroit does have a small handful of wonderful pie makers. Nice to see the “style” recognized elsewhere.

RedJim has started a thread about Detroit pizza with a link to a great SE article.

I haven’t had a pizza in a while…I’m gettin’ hungry.

I saw a new place going in out in Katy yesterday called Thousand Degree Napolitana Pizza. It’s in a new shopping center just past 99 that has a bed bath and beyond and a Dick’s sporting goods that just opened. Sounds interesting!

By the by, I went in the new bed bath and beyond and they have a whole section of Cost Plus World Market food items, I guess they are co-owned now.

Thanks for the rec, Bruce.

I don’t know how you snagged a Pizaro’s sample, they are supposedly offering tastes of all 5 in advance of a 2017 launch. They look great.

brucesw, have you been to Verona’s Flying Pizza on Gessner and Westpark? The owners are from Italy and they’ve been there since at least the early 80’s.

Some of my favorite pizza in town, probably #1. We usually get a half cheese for me and a half sausage for the wifeacita. Do not miss the garlic bread with addictive marinara sauce.

brucesw, have you been to Verona’s Flying Pizza on Gessner and Westpark?

You know I don’t think I’ve ever eaten there despite formerly working in the general area, (Briarpark). We used to eat fairly often at the original Taqueria Ruchi’s which was initially in-line of the center over towards Westpark. They later moved to the pad building where Brenda’s is now. I don’t think we ever hit Verona’s though and I know you’ve been recommending them since we met over at that other place, (CH).

Give us some notice and we should meet there some time.

I don’t know how you snagged a Pizaro’s sample, they are supposedly offering tastes of all 5 in advance of a 2017 launch. They look great.

Hmmm. Not sure what’s going on here. It was written up in both the Comical and Culture Map back then. It wasn’t on the website but it was on the menu cards at the store, and not a separate menu card as I recall, but the main/regular one.

I scrolled thru all the pics on YELP, tho, around 150 of 'em, and there were only 2 pics of the Detroit pizzas and one had a negative comment. Maybe they weren’t selling well and they’re trying to give 'em a boost? Maybe they’ve refined their craft?

I hope they don’t take 'em off the menu. I don’t eat a lot of pizza but I really liked that pizza. I’d still like to find other Sicilian style to try and I intend to go back.

By the by, I went in the new bed bath and beyond and they have a whole section of Cost Plus World Market food items, I guess they are co-owned now.

Didn’t know that. Are they going to carry any of the food items from CPWM? That’s about all I ever buy (tho I always do a lot of browsing). There’s a BB&B a lot closer to me that CPWM.

brucesw, have you been to Verona’s Flying Pizza on Gessner and Westpark? The owners are from Italy and they’ve been there since at least the early 80’s.

No. I actually don’t eat a lot of pizza and prefer thin crust, which doesn’t look like that’s what Verona does. Just got on this kick of Sicilian a couple of months ago.

I’ll have to consider it though. I know you’ve recc’d it many times.

Are they going to carry any of the food items from CPWM?

It was all food items, but I’ve only seen it at this new location.

By the way, I was just watching Guy Fieri eating some beautiful looking pizza in Naples when my keen eye saw a small bug scurrying across the pie towards Guy’s side.