forgot to post! i went two Saturdays ago, showed up at around 10:45, thought i’d wait until 11:00 for sandwich time. they were just doing bfast at that time. No one was in the place. They said their rye bread wasn’t ready and they wouldn’t start selling sandwiches until 11:30 that day. i said I’d come back, ran an errand. i came back at 11:15 and there was a 20+ person line. I waited in line for 40 minutes, and then 20 minutes for my order to be ready. Was it worth it? Yes! But next time I’d go early and get a bfast bagel (with pastrami) or wait until the crowds die down. But the pastrami was fantastic, I feel like it’s the best I’ve had in the Bay Area (limited though that might be for me.) Very tender, fatty enough, spiced but not overly so, and not too salty. I got the OG (cole slaw, swiss cheese, and 1000 Island dressing) - the slaw was very vinegary, as someone above mentioned, i believe, but i’d get it again. My sister got the Dad’s Mustard, which is just pastrami & mustard. She loved it. the rye was delicious, although the crust was very dark, almost burnt. But a lovely, fluffy texture, with a sturdy crust. We also found the pickle excellent, not over-spiced, and wished it was a whole one. The chips were overly done for me - they had that slightly sweet/bitter taste chips can get when they’re over-browned. Overall, this is a great addition to Solano Ave. 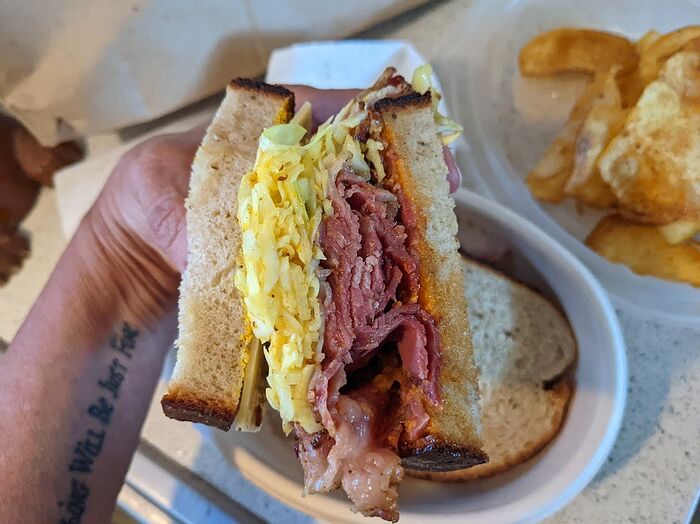 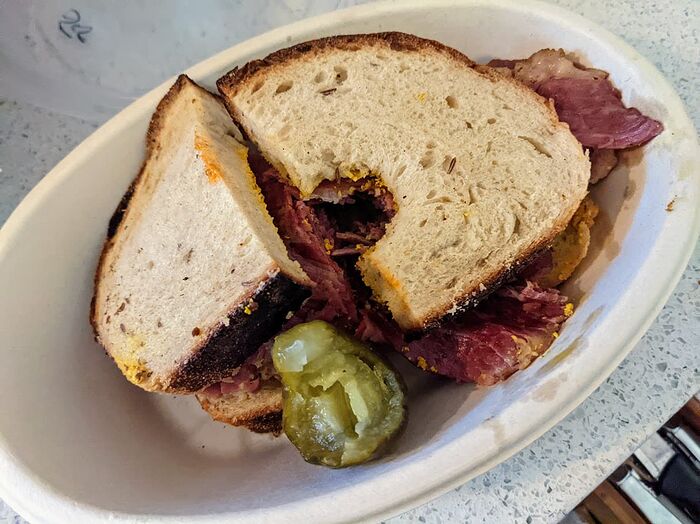 Was it worth it? Yes!

Wow! So glad you posted. I was so hoping you would post!

Stopped by Delirama today. Ordered the OG Husky (large) and split it with my niece. Definitely very good to excellent. I don’t eat pastrami often so no reference point but the pastrami was above and beyond the usual. I mentioned Langer’s and Kanter’s in LA because the niece is from LA. Definitely way better than either. I’d definitely go back. $25 for a sandwich is a bit pricey but it’s a very good sandwich and they make their own pastrami and not even an annual thing for me…and everything has gone up. No surprise really. 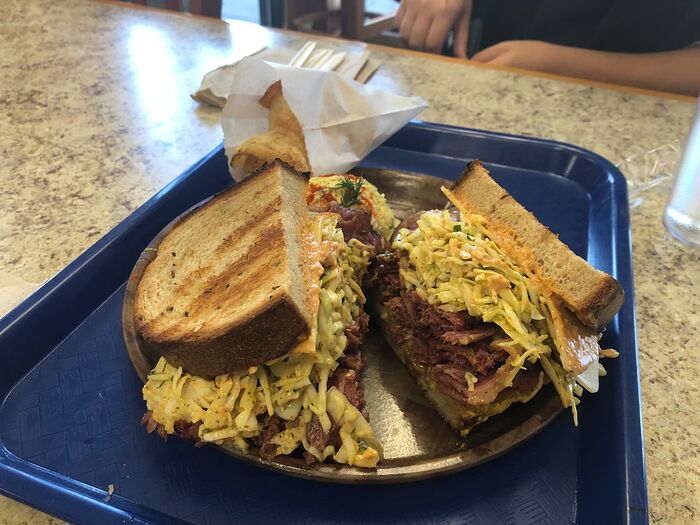 Well made pastrami, though salty; bread thickly and unevenly sliced. Chips had Old Bay ?-ish taste, or something incongruous to our expectation. Staying tuned to see if menu expands. If The Refuge had an East Bay presence . . .

is this still some kind of crazy line situation or can you go there and eat/take out? I can see this being a good lunch for me and my friends/family but not worth a huge production. i remember the craziness over some bagel shop on college ave and it wasn’t worth it! i wouldn’t mind getting a loaf of bread and a few lbs of the pastrami and trying it out. Way better than Cantors is an ez objective - way better than Langers I’m curious enough to try it. Im skeptical based on the picture of the bread and the sandwich but good pastrami is good pastrami and good bread can be sliced (and not toasted) however one wants.

We arrived around 2 on a weekday to one or two occupied tables and one person ahead in line. It appears DIY is unavailable. As for the fertile LA DeliLand, somehow we came to believe that Langers et al. rely on RC Provisions for pastrami (no retail consumers) ; so it’s all about the how the deli handles the product.

Only one way to find out, try it. That said, I wouldn’t drive far, or over a bridge for it…but then I wouldn’t for most things.

As for better than X…take that with a grain of salt. So many things go into “the best” equation, personal preference/background, experience with, off day, yada, yada…I just skip that. Also as I said, I rarely eat pastrami. It’s not a big west coast thing. Didn’t grow up around it.

Sure the bread was thick but better that then it disappear into that thin mushed up piece of wet, soggy dough…but that’s personal preference. I don’t like that with a burger either. Yes, could get into toasted, density, yada, yada…or not.

If you’re into pastrami and want to know if it’s the best, or how it ranks…then go. I was curious and it was convenient and I had to take my visiting niece to lunch. Tasty, enjoyable but didn’t change my life.

P.S. It’s against our religion to buy a $3.00 unadorned bagel. Knowing the price of everything doesn’t matter; it’s knowing the value of what matters that matters to us. i called in an order for pick-up today, the Dad’s Mustard, Husky. we’d wanted it on a bagel but the ordering site said they were all sold out, before they even opened. and it said it would be 45 minutes. for one sandwich. this was 20 minutes after they’d opened. i arrived 15 minutes before it was due to be ready, just in case, but no such luck. there were maybe 4 parties eating inside, and a couple people ordering ahead of me, and a couple people waiting for online orders. i was told that they had lost their baker so no bagels for a while. The place just wasn’t that busy to warrant how long orders were taking. that said, one of the women taking orders and serving tables was incredibly welcoming to everyone who came in, and i think she may have been one of the owners. it felt like they were struggling.

the pastrami was great, delicious. the bread was quite oily - too much so for my sister (we were splitting it), but i had no problem with it. the chips were so oily they literally squirted oil into your mouth. the order came with cole slaw that tasted strongly (not overly) of tarragon but not much else. but it was a good crunchy addition to balance the fattiness.

i’ll keep going back for their pastrami, which i saw online you could purchase by the lb., though i didn’t see anything about that at the place itself. but i forgot to ask. i’m curious to try the lox and pastrami “bacon” once they get their bagels back. i’m also going to find out if you can get the sandwich on untoasted rye. 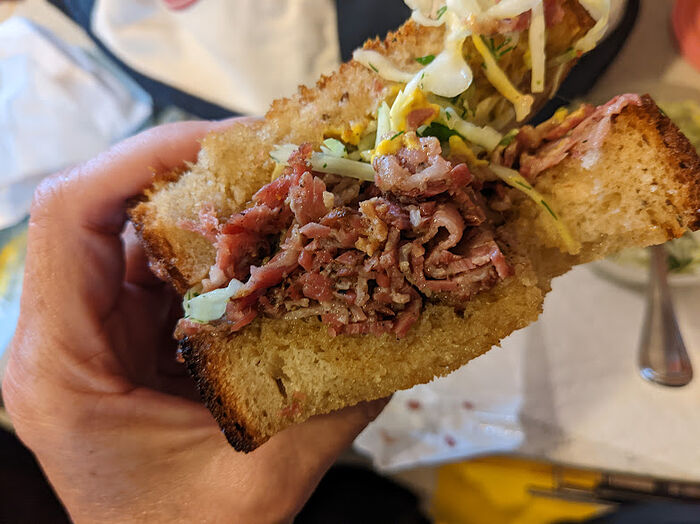 Thanks for taking one for the team. I’ve been wanting to go, but I think I’ll give them some time to work out the bugs.

thanks! i loved it the first time (posted above) and I’ll be going back again for sure. the pastrami is just too good.