Excited about this place opening up on Monday, 8/1/22, near the top of Solano Ave. in North Berkeley. 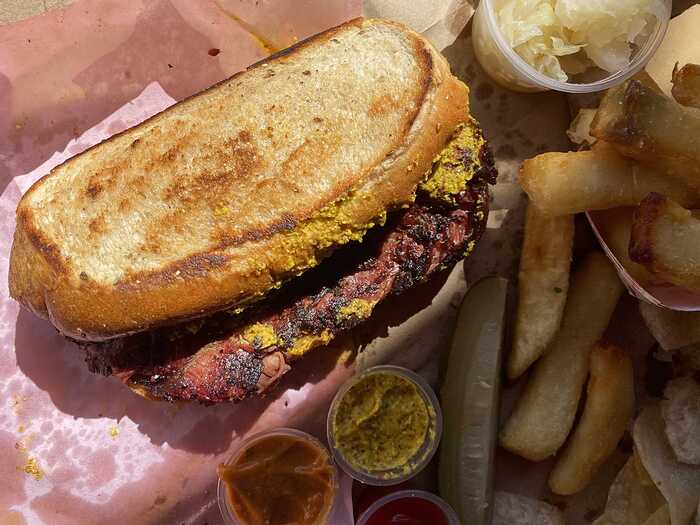 The owners of a popular pastrami pop-up are opening their first restaurant in Berkeley in...

Anyone got any inside scoop on it?

Pastrami Pryo was a pop-up, then short lived brick and mortar on Broadway and Embarcadero, Jack London Square in Oakland…then the pandemic hit. They got some TV/youtube time and made a lot of lists and a little word of mouth but then pandemic. A friend sent me a link, so I walked by but they were done already. Otherwise don’t know much. If I get a chance I’ll check it out,…or add it to the list of places to check out. Thanks! we’re going to check it out on Wednesday for lunch!

Wow, it looks fantastic, thanks for the video.

Has anyone tried it yet? Looks so good!

I tried it on their second day of business. The pastrami is excellent. They were a little harried–first they said they ran out of rye bread; when I got to the front of the short line they said they had some left , so I ordered just pastrami on rye, no mustard; the wait after ordering was long; and when I got home with the food it turned out to be a Reuben on an everything bagel with swiss cheese, cole slaw, russian dressing and…mustard. I’ll be back nevertheless, especially to try their pizza, coming out next month.

That’s funny! I wonder if someone got your order…

We’re getting lunch from there tomorrow!

Yay! I hope you try the pastrami! It would sure beat Goldbelly or another trip to Los Angeles!

I ordered a pastrami sandwich with mustard and two Reubens, one without cheese. The pastrami was excellent, as was the rye bread - all of us were delighted! Each sandwich came with a small bag of house made chips and a nice chunk of pickle. While I don’t want to order a whole vegan pastrami sandwich, I am eager to try it - hoping to recruit a vegetarian pal to join me for lunch sometime soon! Looking forward to trying their breakfast sandwiches.

ugh, they’re not open today! last time we wanted to go they were having their soft opening (private), and we just learned that they’re not open Wednesdays. damn. So it’ll have to be this Saturday (i’m only in the East Bay Wed. & Sat.)

Granted I have limited experience traditional Jewish deli food. My experience is limited pretty much to Canters, and Factor’s in Los Angeles, Fine and Shapiro which being Kosher has no Ruben because of the Swiss Cheese, and Katz’s in New York City, and Sherman’s in Palm Desert. Plus, Saul’s in Berkeley, but that is in a different category because of its use of Acme NY rye, which is misnamed because it is nothing like NY rye.

First comes the rye bread and the rye bread at Delirama was good. Mimi Sheraton food writer for the NYT said Los Angeles rye was better than New York’s. NY’s is too soft and insubstantial. Being from L.A. I grew up with L.A.rye and agree. The rye on the Delirama sandwich is very good., better than NY, more like LA, but it would be even better if it were more substancial.

I felt the sauerkraut on the Ruben was too sour. On the other sandwich the slaw was near perfect, perhaps a little more finely chopped would have been better.

There was too much Russian dressing on the Rueben and this has nothing to do with the current boycott of Russia.

I also only had a single bite of the pickle because I thought it smelled like it was pickled with an excess of cloves.

You’re not alone. When my father made pickles, he always picked all of the cloves out of the pickling spice.

Went by on a Friday afternoon (around 2pm) for a stroll and they had a Sold Out sign. Seem to be doing brisk business. 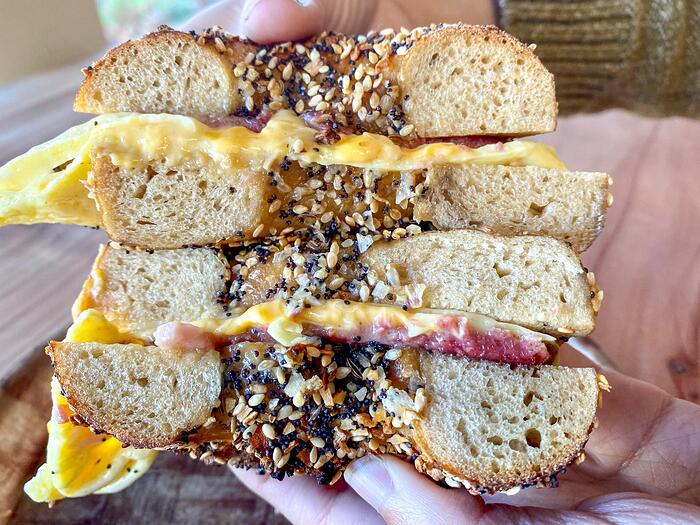 What to eat at the Bay Area’s new pastrami paradise

Three of the best dishes to eat at Delirama, a pastrami-centric restaurant that opened in...