The COVID pandemic has, so far, forced me to cancel two of my planned food holidays for the first half of this year: Sri Lanka in April, and Mumbai in May.

For the Sri Lanka trip, I’d been looking forward to meeting 83-year-old Master Chef Publis Silva, who’s regarded as something of a living national treasure in his home country. He’d written 23 cookbooks on the cuisine of Sri Lanka, and now still heads the kitchens of Mount Lavinia, one of the grandest hotels in Sri Lanka, where he’d been working for the past 64 years. I don’t know when we can eventually visit Sri Lanka, but I do hope Chef Silva stays in the best of health till we get to meet him.

The other trip we’d planned, to Mumbai, was to visit, amongst others, the classic Parsi cafes of old Mumbai. These cafes are an endangered species, as young Mumbaikars tend to opt for modern coffee chains and swish cafes, as opposed to the crumbling atmosphere of derelict but precious old-world spots like Britannia & Co and Yazdani Bakery & Cafe. Again, we hope to be back in Mumbai when all this madness is finally gone.

So, with the on-going COVID lockdown and nowhere to go, I can only share about a not-so-recent visit to Karim’s of Old Delhi.

Karim’s is renowned amongst Delhiites as being the last torch-bearers of Mughlai court cuisine. The Mughal (also spelt Moghul) empire which ruled India for more than three centuries was brought to its knees by the British in 1857. The last emperor went into exile in Rangoon, whilst the royal chefs fled as British troops sacked Delhi. One of them was Mohammad Awaiz, who went to Ghaziabad (6 hours’ trek from Old Delhi) to find other work, but imparted all his knowledge of Mughlai court cuisine to his son, Haji Karimuddin.

Haji Karimuddin returned to old Delhi in 1911 to run a food stall, and finally set up his eponymously-named restaurant, shortened to Karim’s just two years later, in 1913. The cooking techniques and secret spice mixes were taught only to the male family members of their clan, much of them orally.

The busy thoroughfare which one needed to cross to get from Jama Masjid, built by Shah Jahan, famed for also having built the Taj Mahal, to get to Gali Kababian, where Karim’s is located. 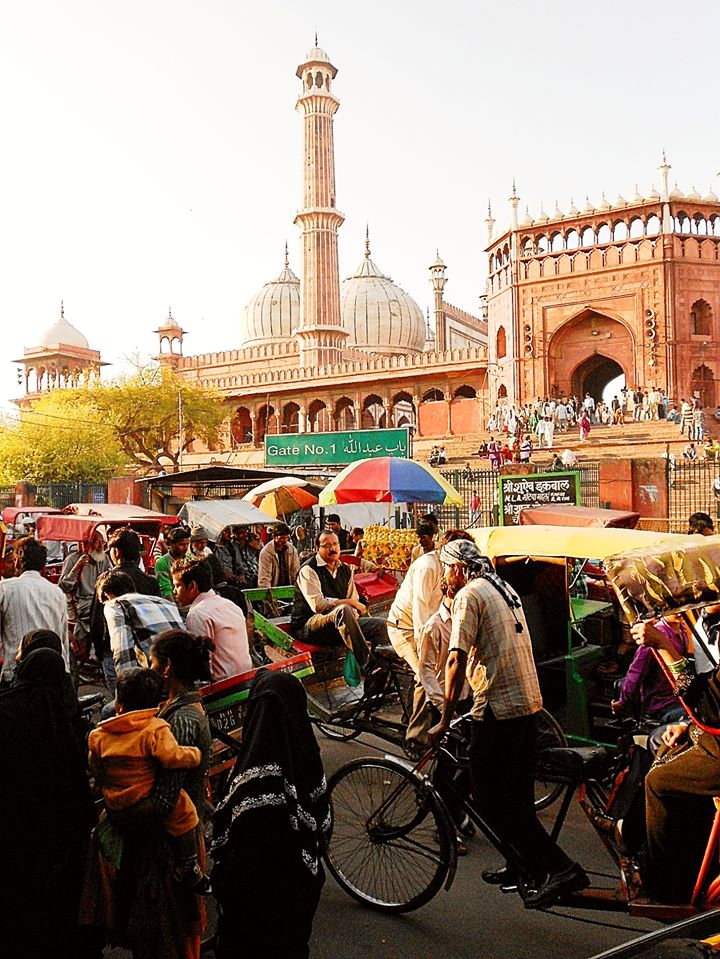 For the longest time, the reins of control over Karim’s, which had grown from one single restaurant hidden in a small alleyway off Gali Kababian, a very busy Muslim enclave next to Delhi’s historic Jama Masjid, to a 26-branch restaurant chain, rested with Haji Zahooruddin who just passed away in 2018. Haji Zahooruddin was Karimuddin’s grandson, and has worked at Karim’s since the age of 15, until he died at 85, when he’s the managing director of the Karim’s chain.

The Gali Kababian is a busy, noisy alleyway which was an assault on all of one’s senses 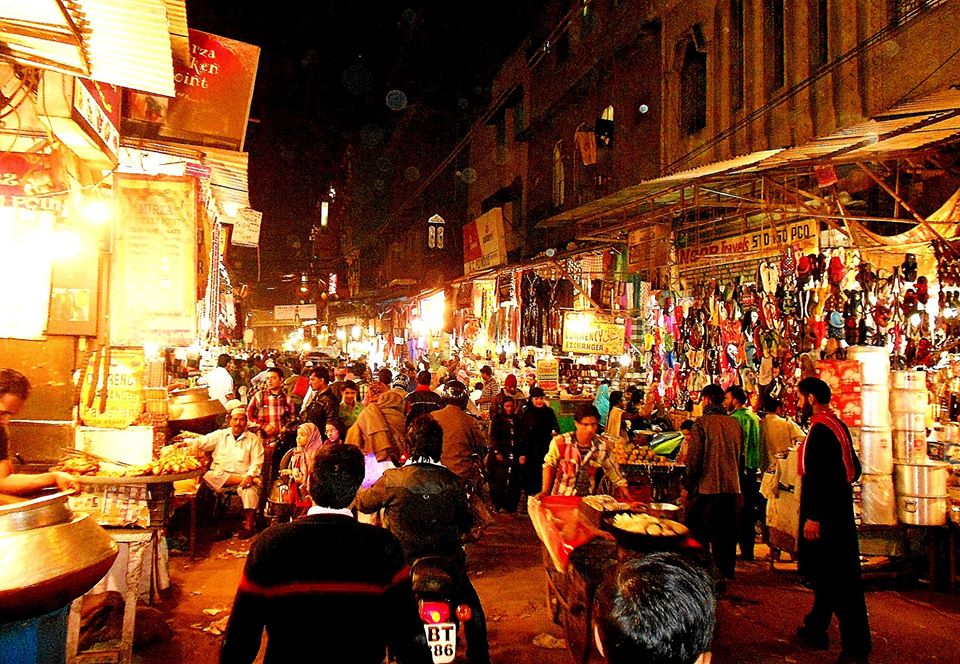 Haji Zahooruddin, as he ran Karim’s, was a stickler for tradition, and had always insisted that the core of Karim’s menu has to be the 4 main dishes: korma, nihari, mutton burra, and kebabs, all prepared using the original recipes, unchanged since the restaurant’s founding back in 1913.

In recent years, Karim’s, in an effort to “keep up with the times”, have allowed some “new”, “popular” items to creep in - like the butter chicken (shock! horror!). But, by and large, this place still keeps to the old ways.

Pots of curried meats (and some vegetables), awaiting to be ordered. The men behind were in-charge of making the flatbreads 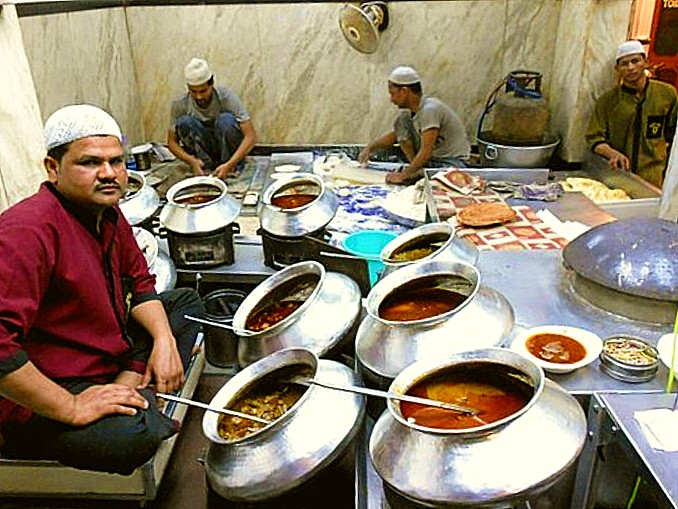 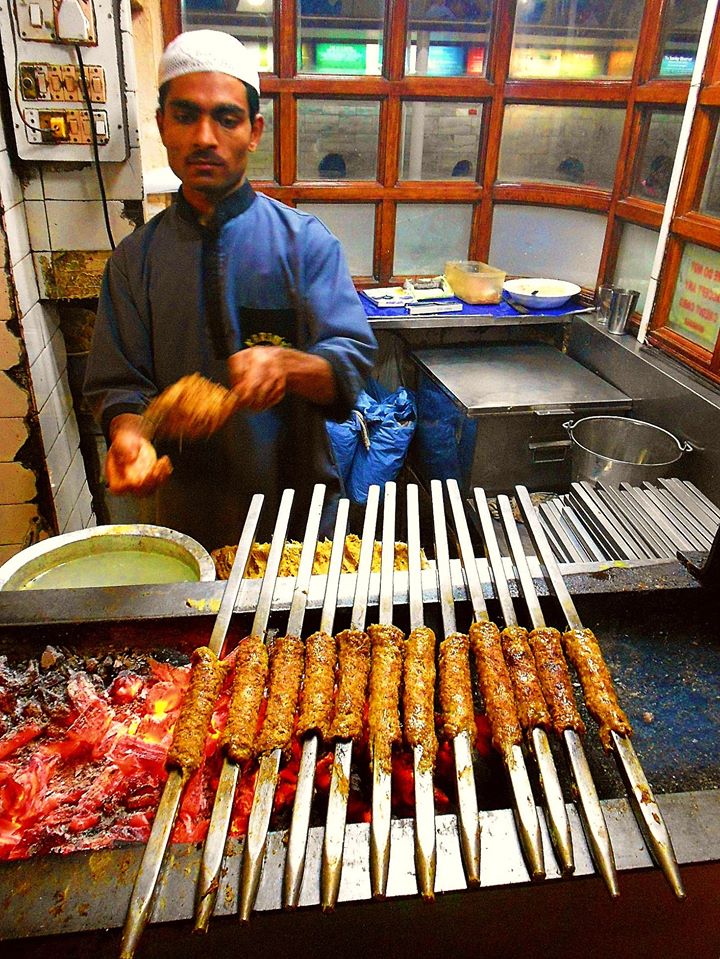 We couldn’t order the nihari, as traditionally, it’s a breakfast dish: the beef or lamb needed to be stewed overnight, usually 7 hours at least, so it’ll be ready first thing in the morning. But we had an amazing karahi chicken stew, which went beautifully with the fragrant chicken biriyani. 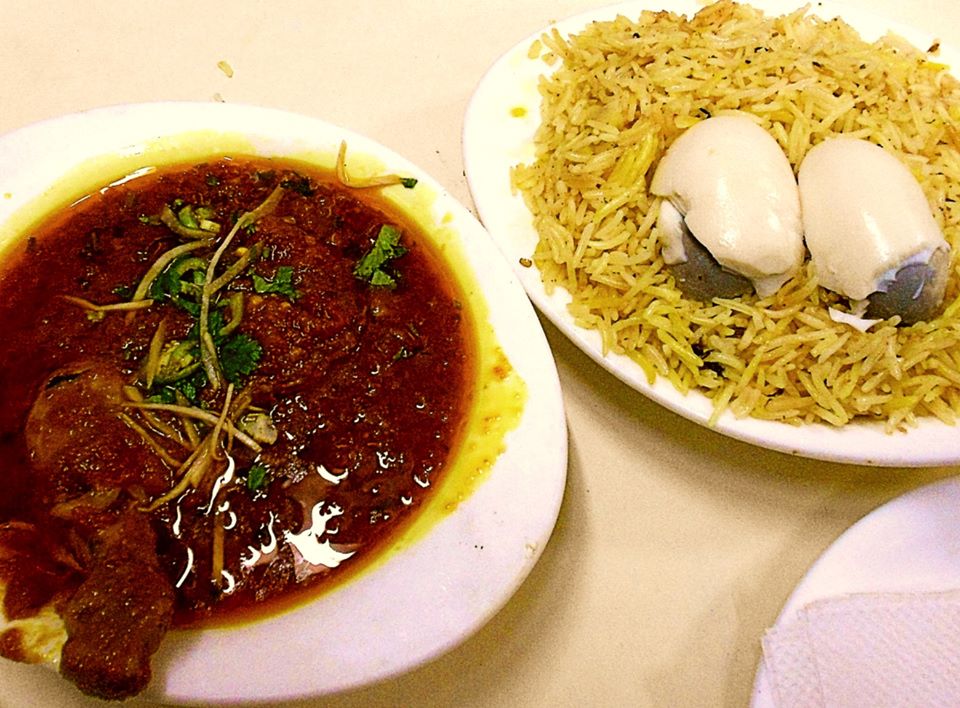 The seekh (minced mutton) kebabs were amazingly moist and flavoursome, even if a bit on the salty side. 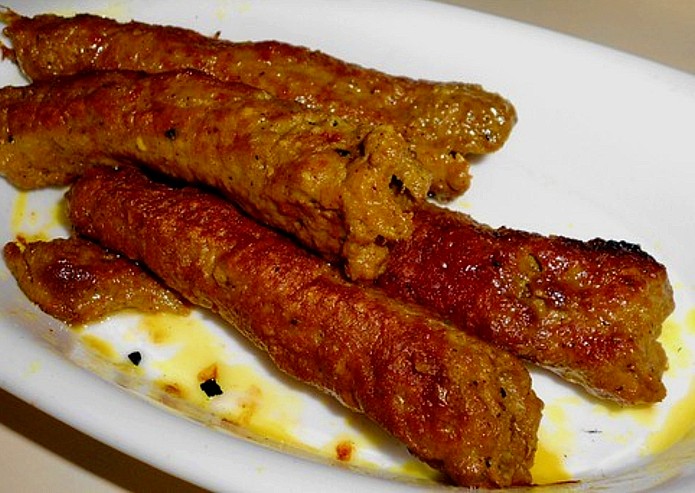 Mutton burra - these legendary mutton chops were a bit toothsome, but packed some really great flavours, and were my fave item for the meal. 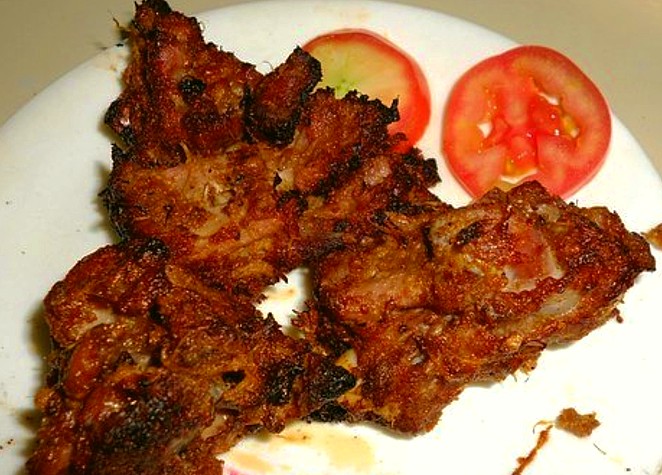 Palak paneer - we felt obligated to order a “vegetable” dish and settled on this paneer cheese-creamed spinach classic. It looked like any other palak paneer we’d tasted elsewhere, but one taste was enough to convince us that there is a very good reason why this place had been around for more than 100 years. The spinach was simply incredible - just the right textures and spicing. 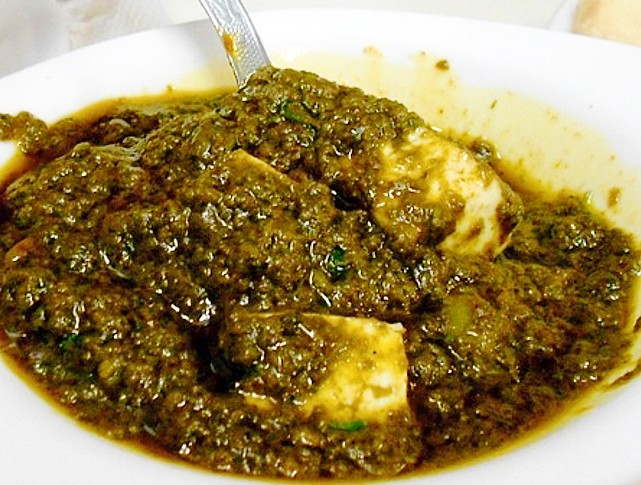 This place is a keeper. Make sure you visit its original location here at Gali Kababian, as the other branches can be located in modern malls or newer locations that don’t have the atmosphere that this place has in loads. 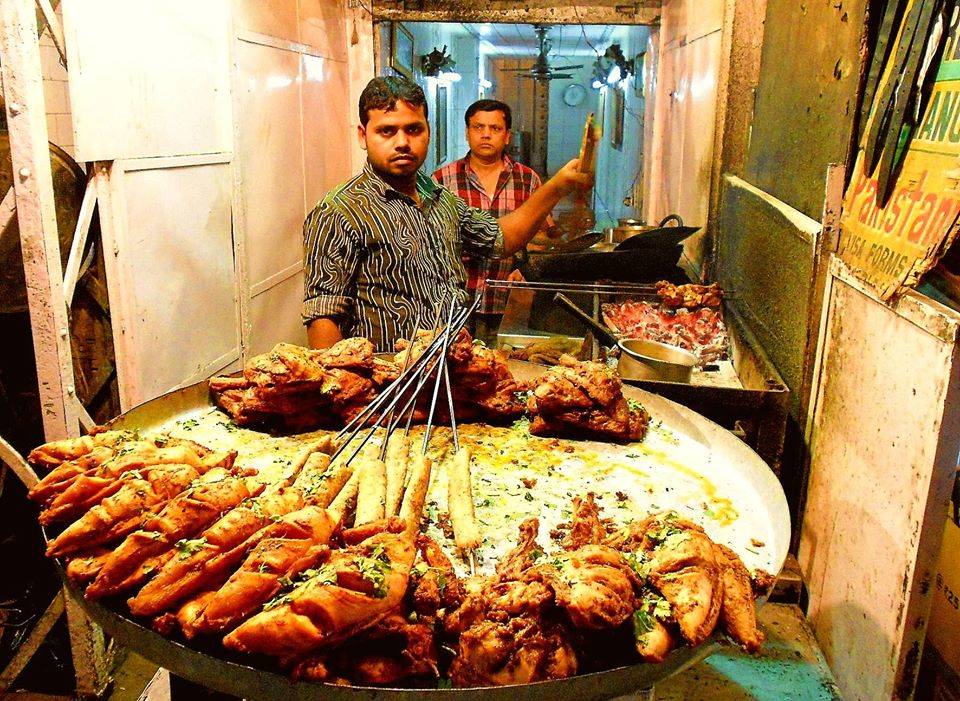 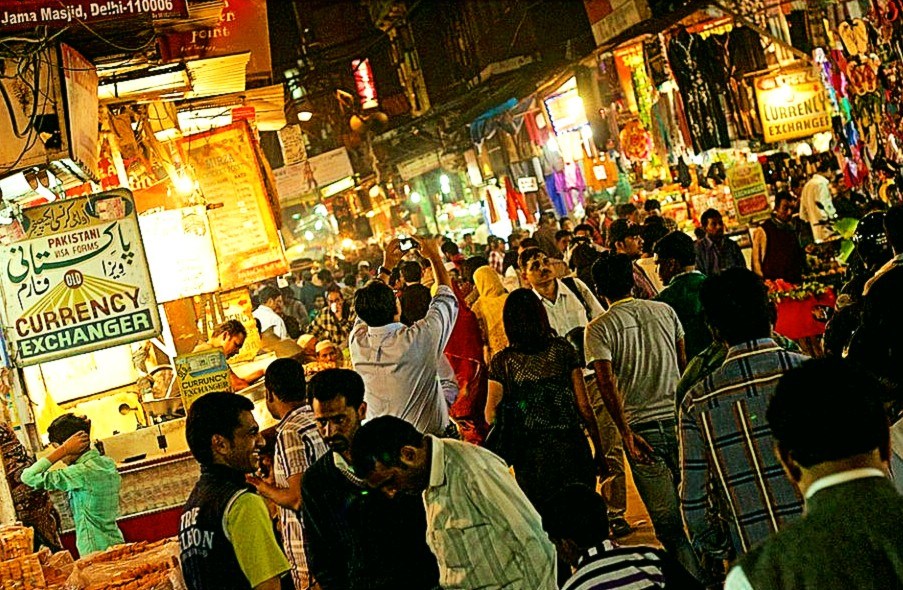 So, whilst the illustrious 330-year-old Mughal Empire is no more, its court cuisine lives on - at Karim’s.

I judge any new Indian restaurant by the quality of its seekh kebabs. I know what a good one should be like so it’s always a good start. And I can tell, just by looking, these are the “real deal”. What fab looking food.

Sorry you’re missing your trips - they sound exciting. The owner of my favourite Indian place in the UK comes from Mumbai and they specialise in the city’s street food. His business partner is Iranian and she obviously has an interest in the Parsee food in the city. Last year, they held a “Parsee week” with a special menu. Unfortunately, we were away so didnt get to try it (and this year’s has been cancelled due to the lockdown). Maybe next year?

Last year, they held a “Parsee week” with a special menu.

Parsi food is very, very rare - though I found its flavours too bland (or subtle) for my taste.
But don’t miss it if they ever hold one again!

A couple of years back we bookended a trip to North India in Delhi and went here on our first night in the city. It was just after Diwali and the shopping streets around the old town were absolutely heaving (perhaps they always are).

It wasn’t the most relaxing start to a trip, but we enjoyed Karims so much we went back when we passed through Delhi again on our way home. It’s very rare for us to eat twice at the same place whilst away, but the mutton burra and the brain dish were particularly memorable.

It wasn’t the most relaxing start to a trip,

You’re so lucky indeed. I’m still dreaming of going back there again.
When we got back into our car that time, we almost wanted to say a prayer of thanksgiving - for the fact that we survived the chaos there!

I was just going to say, the brains here were excellent.

Delhi is a trip, though. Dry/hot season there with 400+ AQI and 112 degrees in the mid-afternoon is basically as close as this planet gets to Hell.

But worth it for the food and people.

Dying for some good seekh now!

Have you tried the Kashmir in Penang? An oldie but a goodie.

Kashmir at the Oriental Hotel was started back in 1984 by the friendly, chatty Johnny Mohan. Johnny himself is Sindhi, but his restaurant’s repertoire is crafted to give the customers exactly what they are looking for when one thinks of North Indian/Mughlai cuisine: from tandooris to chicken tikkas and kormas, and biryanis & pulaos. Through the decades, Kashmir has built itself a loyal customer base, an is renowned for having perhaps the best tandoori and biryani in town. [DSC00215] The large…

I am going to check it out. Maybe they’ll deliver?