Delfina, one of the OG “destination” restaurants in the Mission, is open for outdoors dining in their parklet while their interior is being remodeled. Opened back in1998, it has also since spawned several pizza-centric Pizzeria Delfina restaurants around the Bay Area. And also the Roman inspired Locanda, also in the Mission, that has since closed. I had a solo dinner here.

I started with the Rovagnati mortadella ($14), which comes with some of their new focaccia. Good thinly sliced mortadella with a very airy and fluffy focaccia topped with flaky sea salt. Apparently the fluffiness of the focaccia is due to high hydration according to my friendly waiter. I made little mortadella sandwiches and saved some to mop up some sauce from my next course. 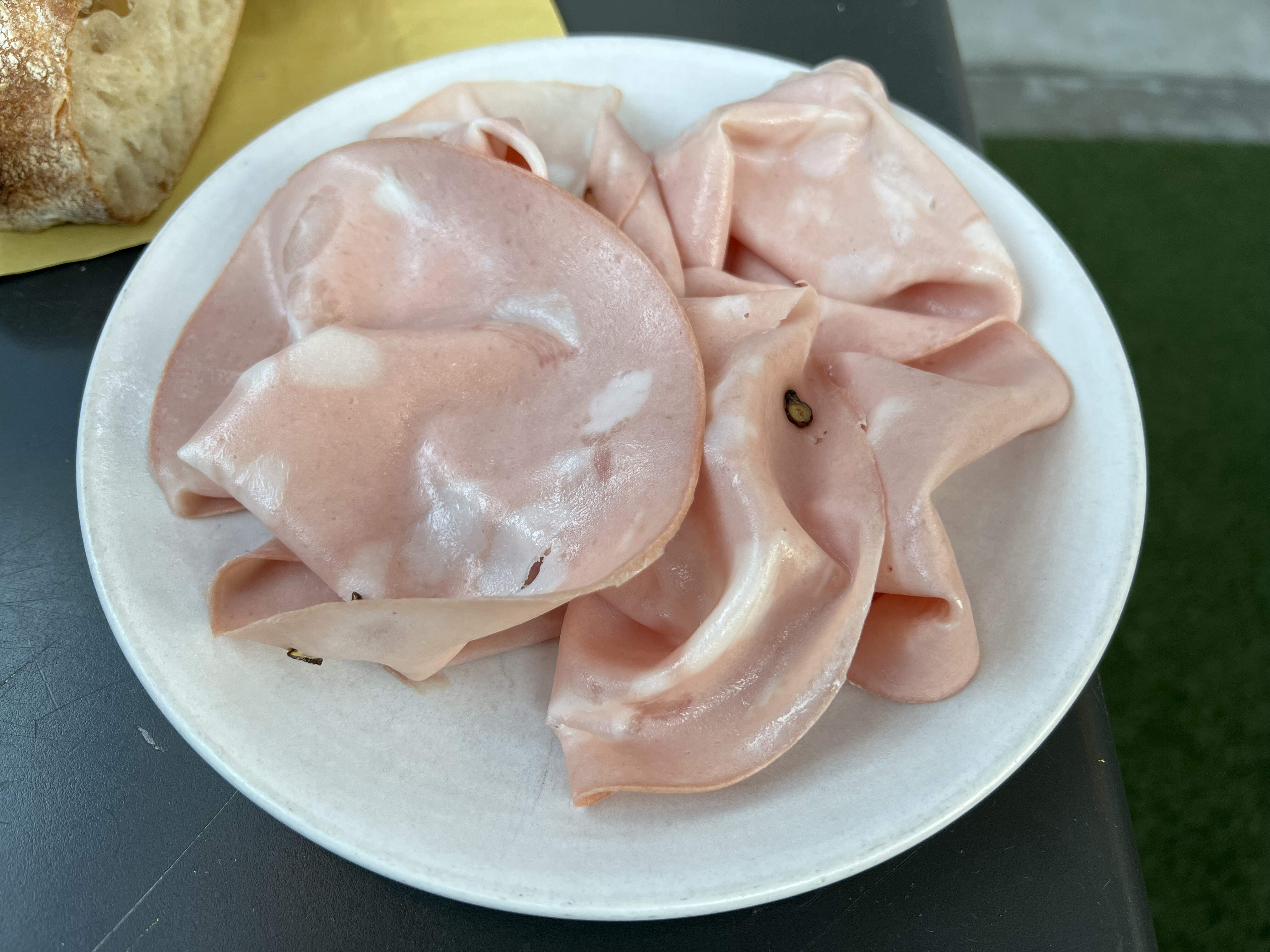 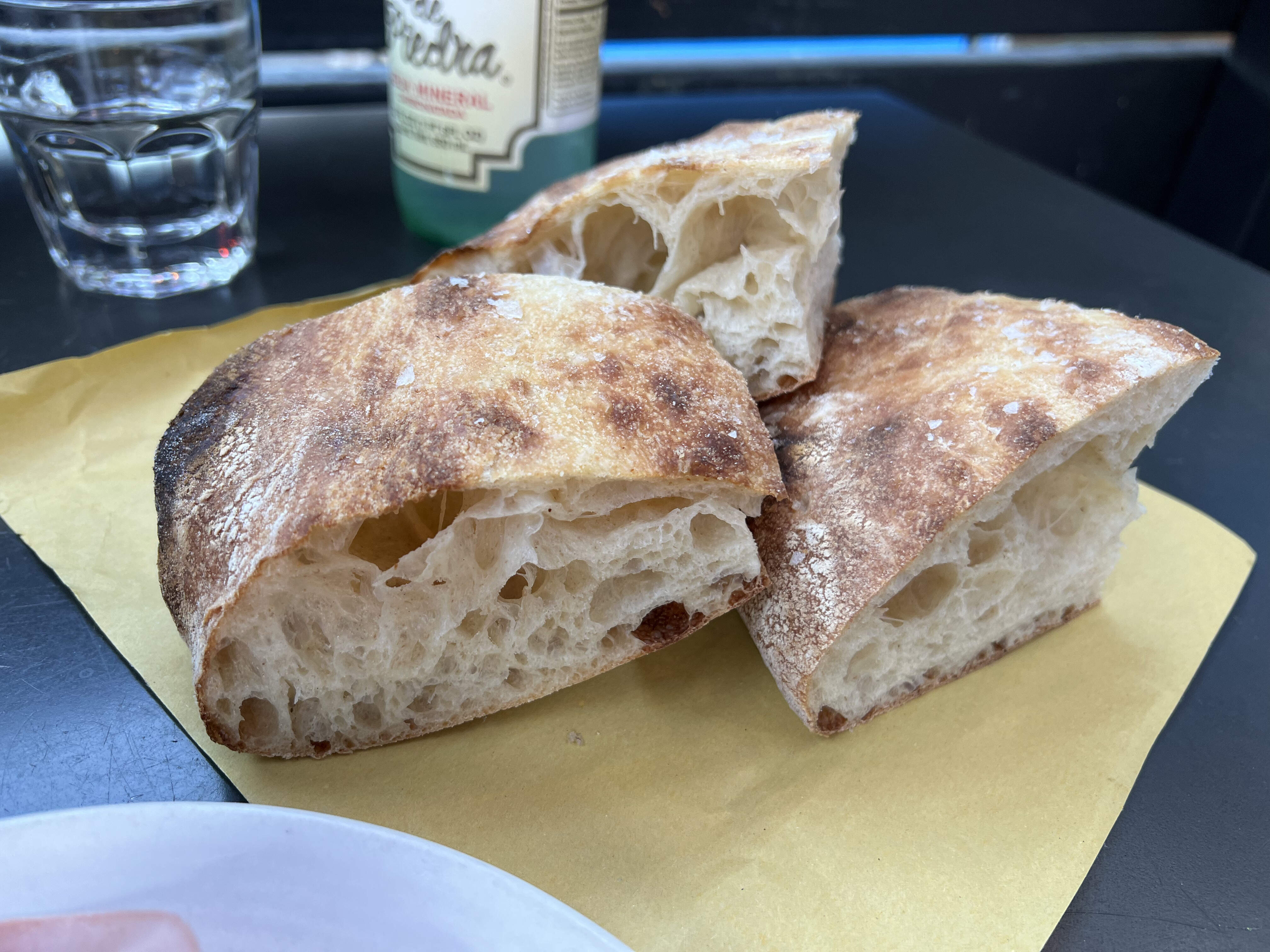 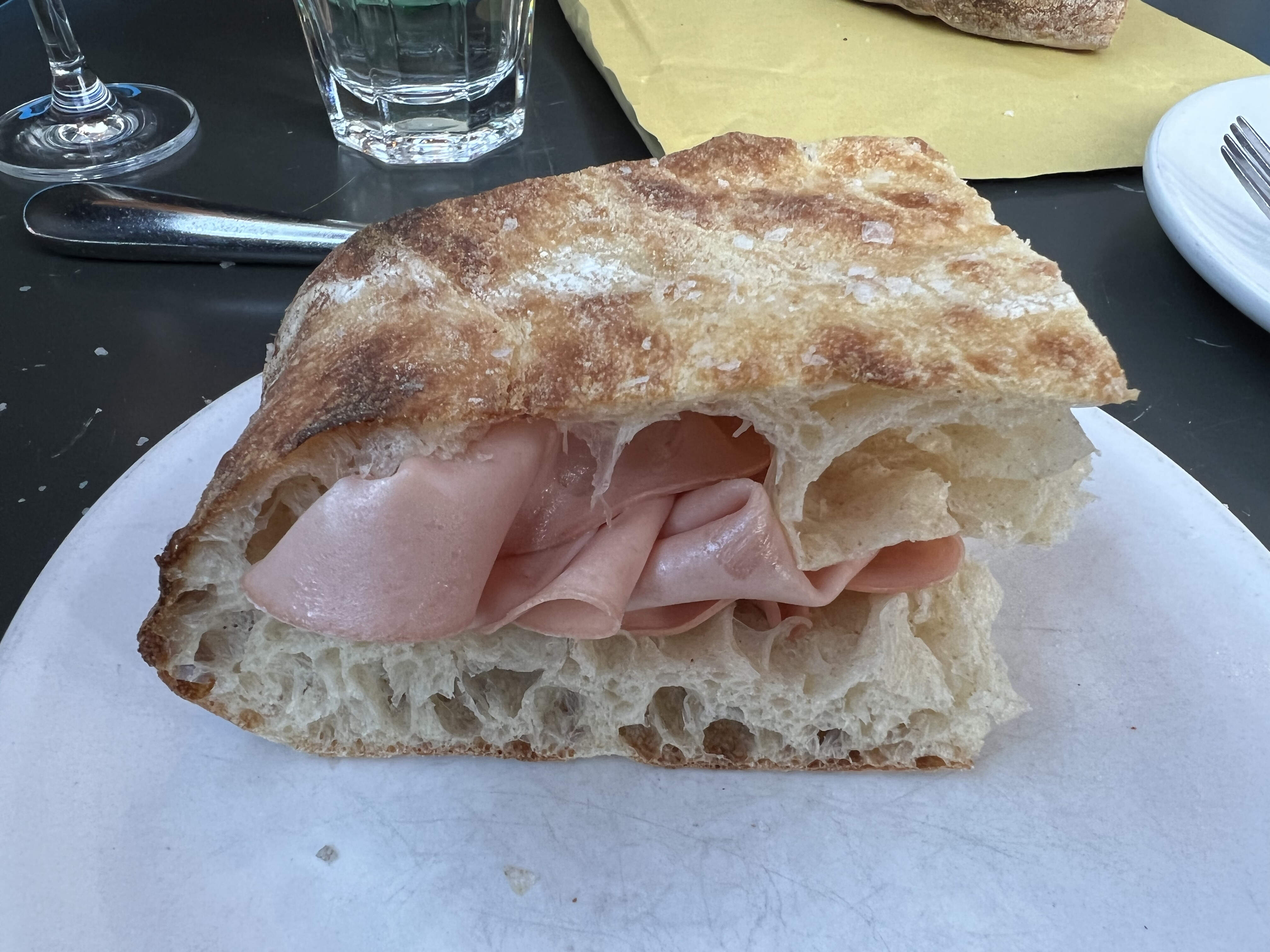 Which was the
GRILLED MONTEREY BAY CALAMARI ($19)
rice beans, Taggiasca olives, parsley oil
Delicious! Nicely cooked squid with some smokiness from the grill. On top of little beans in a sauce with lots of fruity olive oil and apparently parsley. I’ve had this dish a few times before in various forms (I believe it is a signature Delfina dish as there always seems to be a grilled squid with beans on the menu) and it hasn’t disappointed. 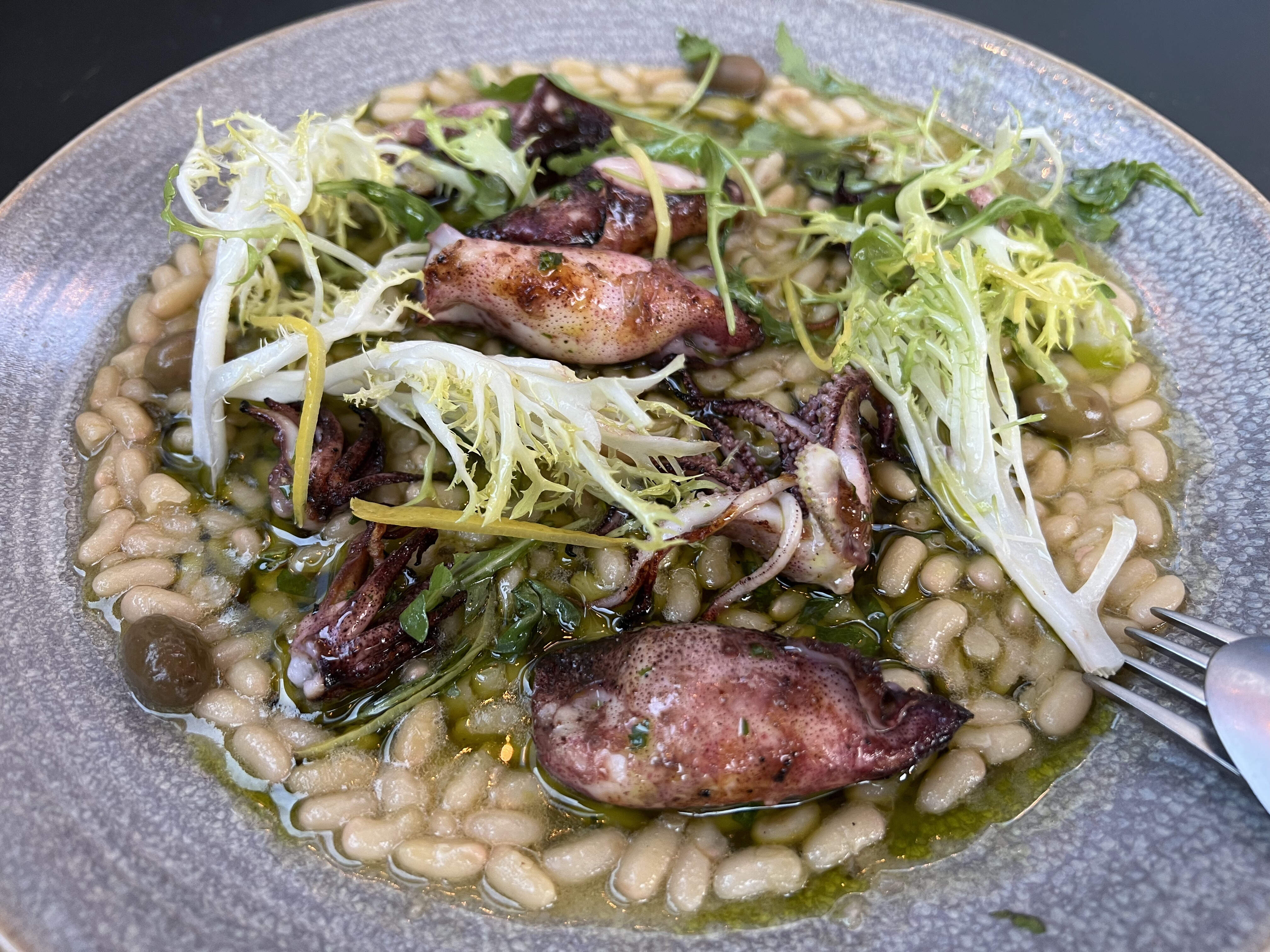 Next, I had the
PACCHERI AL AMALFITANA ($28)
HMB petrale sole, fresh San Marzano tomato
Which was good. Very nicely al dente paccheri, which are kind of like short rigatoni, in a fresh tasting tomato sauce with chunks of petrale sole. 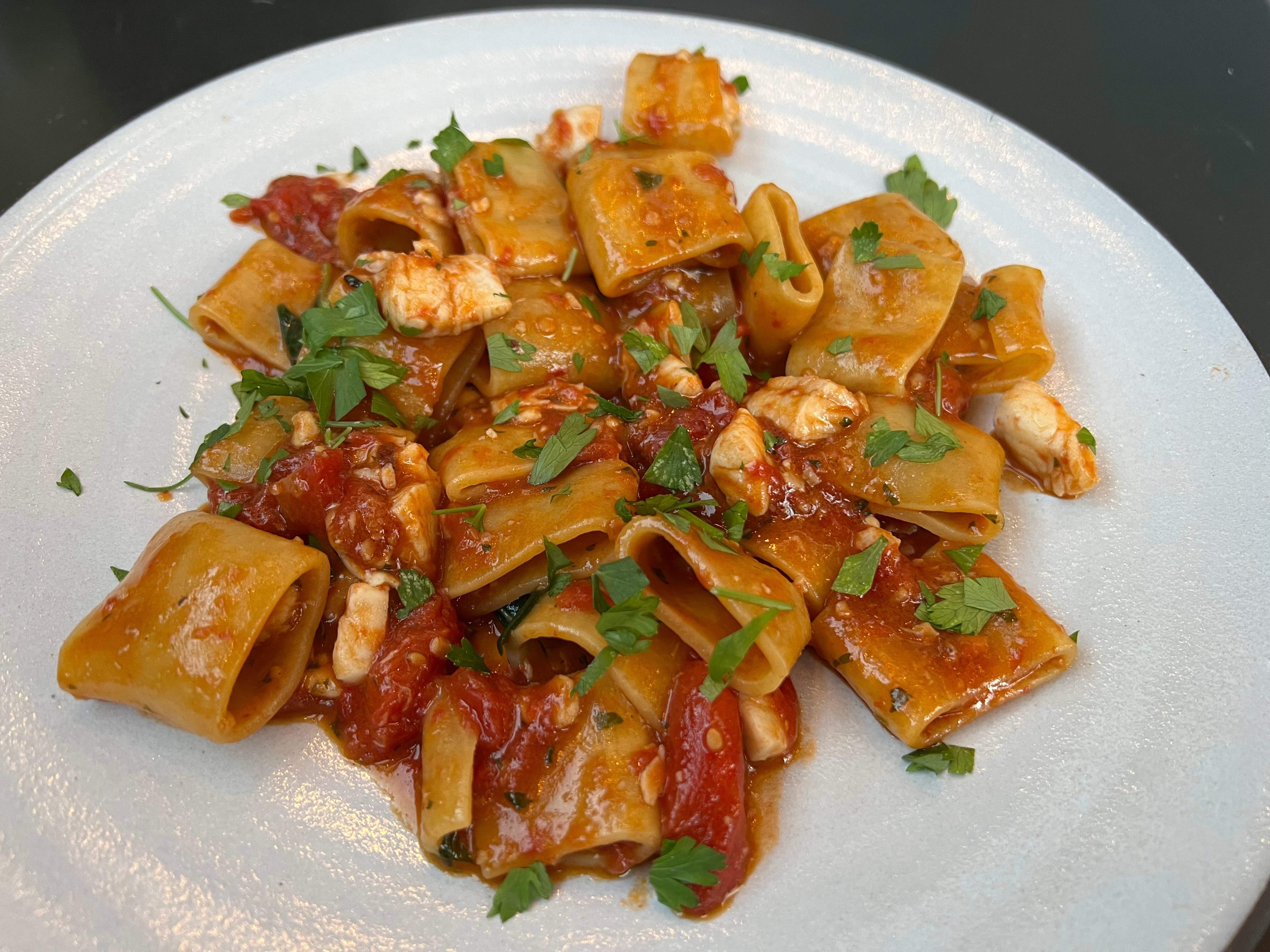 For dessert I had the
AFFOGATO CORRETTO ($13)
fior di latte gelato, moka pot espresso, Margerum amaro, almond cantucci
A boozy affogato - gelato with espresso and amaro poured on top. This was really good. A generous amount of gelato. The almond cantucci were like little almond biscotti. They also left a bottle with more of the orange-y amaro (Margerum amaro, made in California) to pour on as desired. 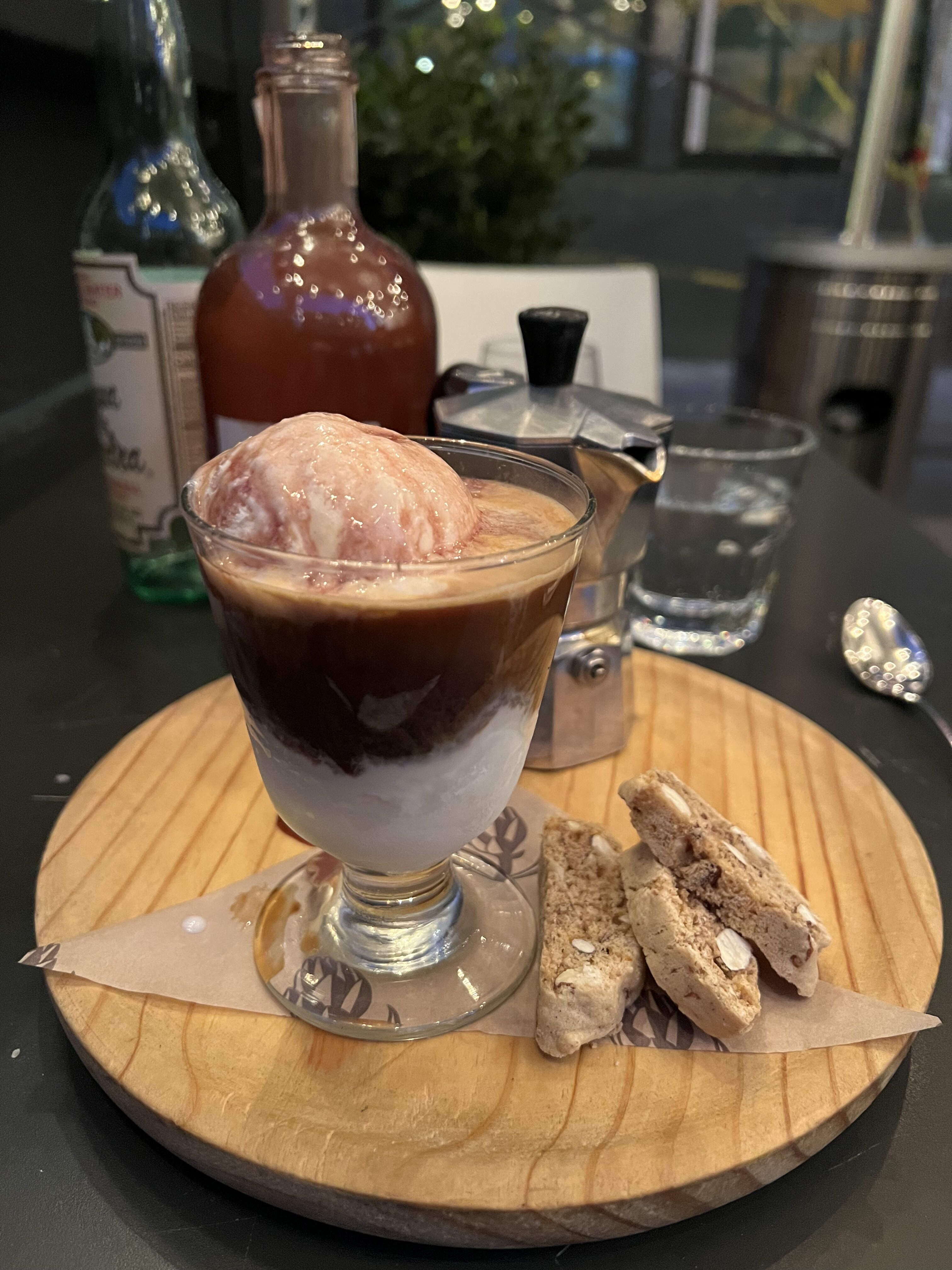 Also had a Delfini ($14) to drink, which was nice, basically a martini with grapefruit bitters and a grapefruit twist. 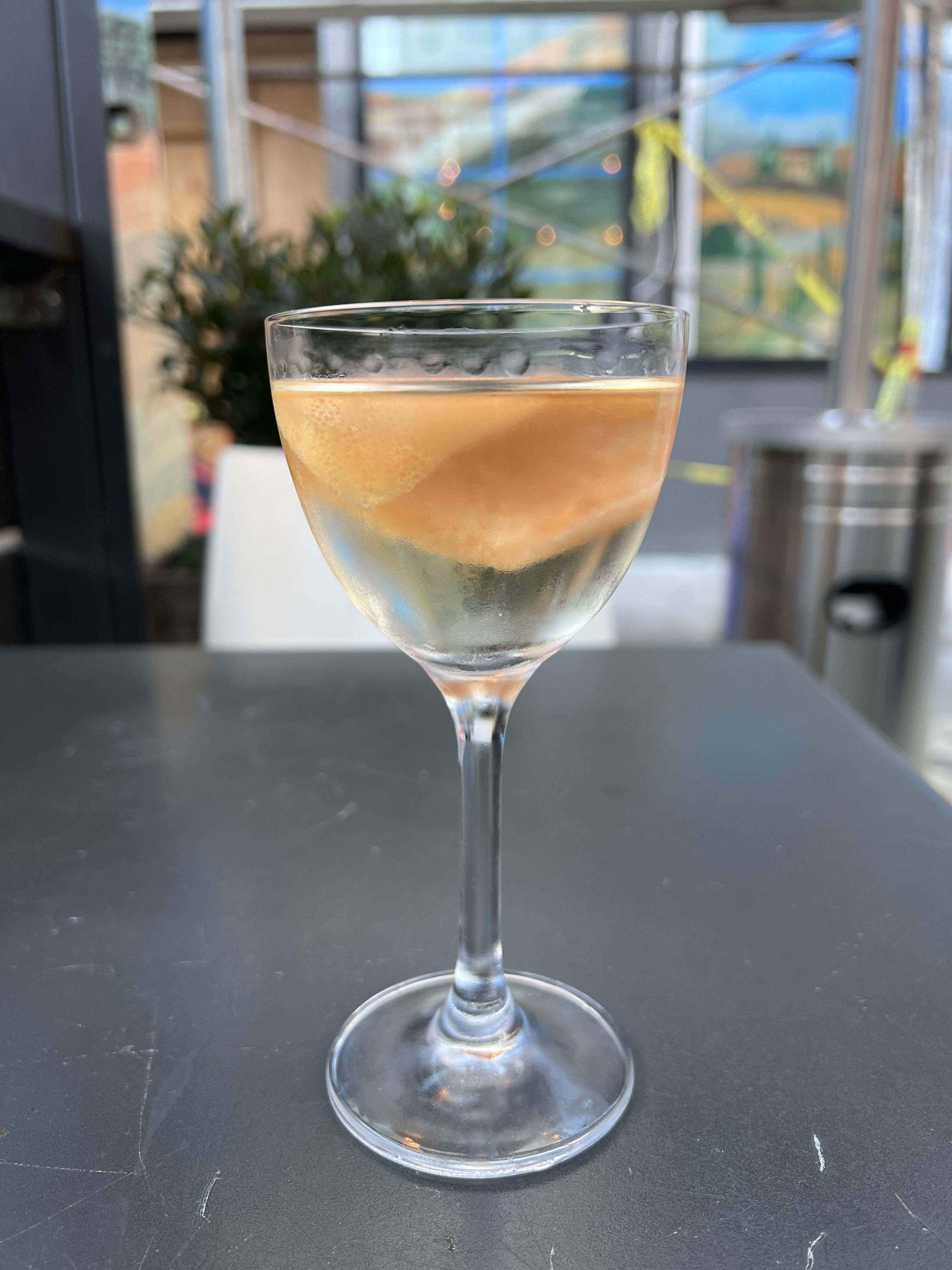 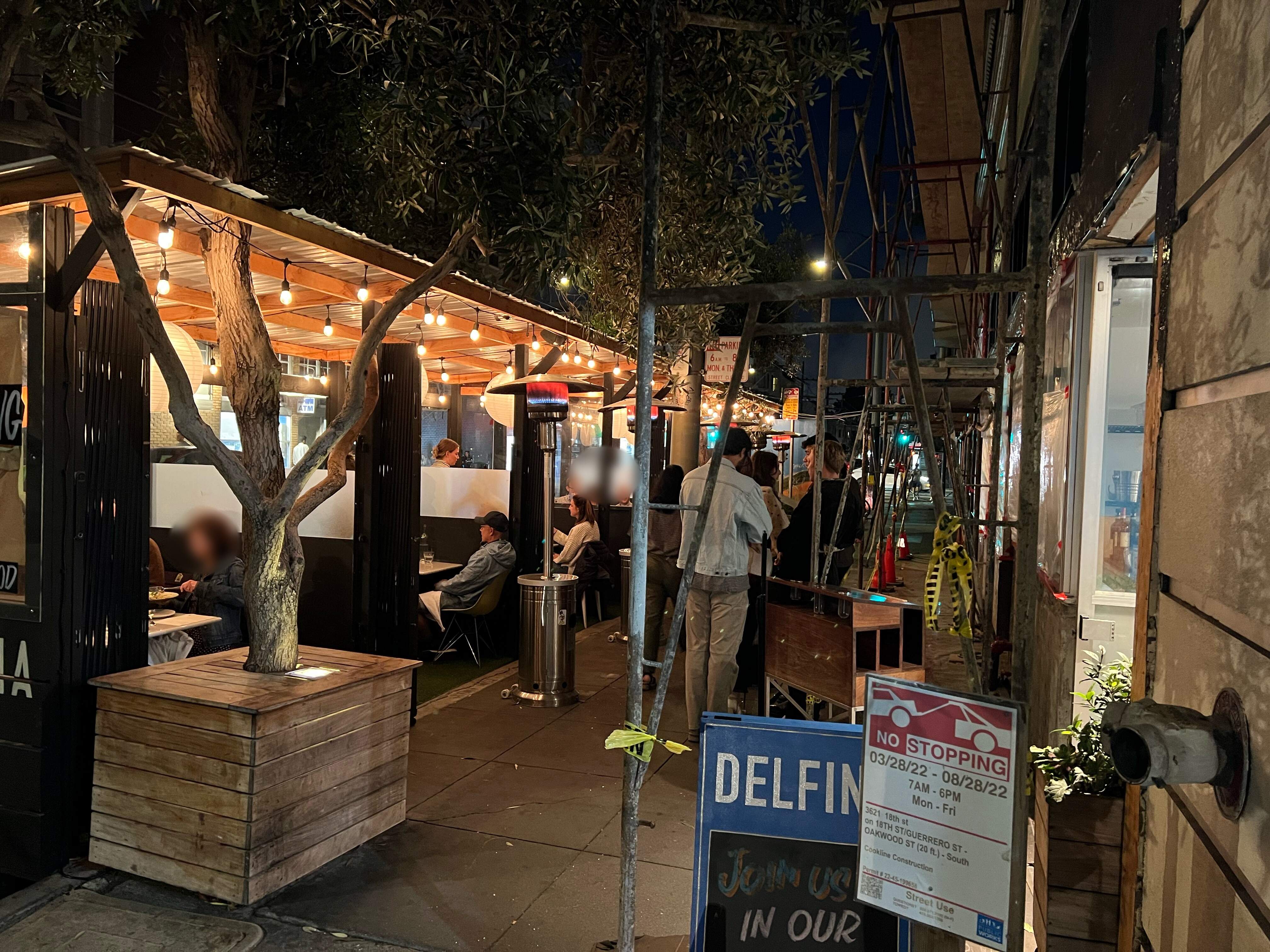 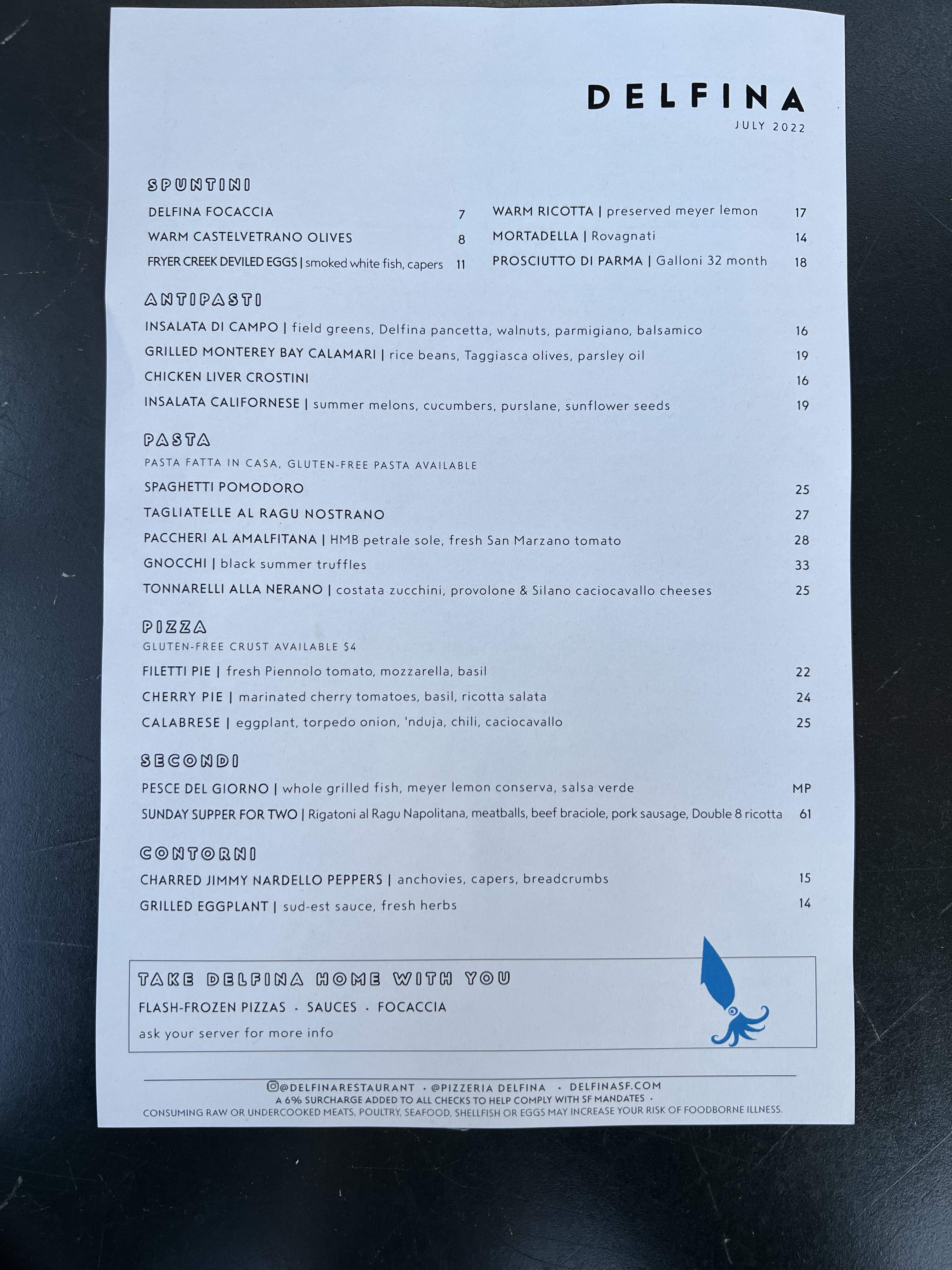 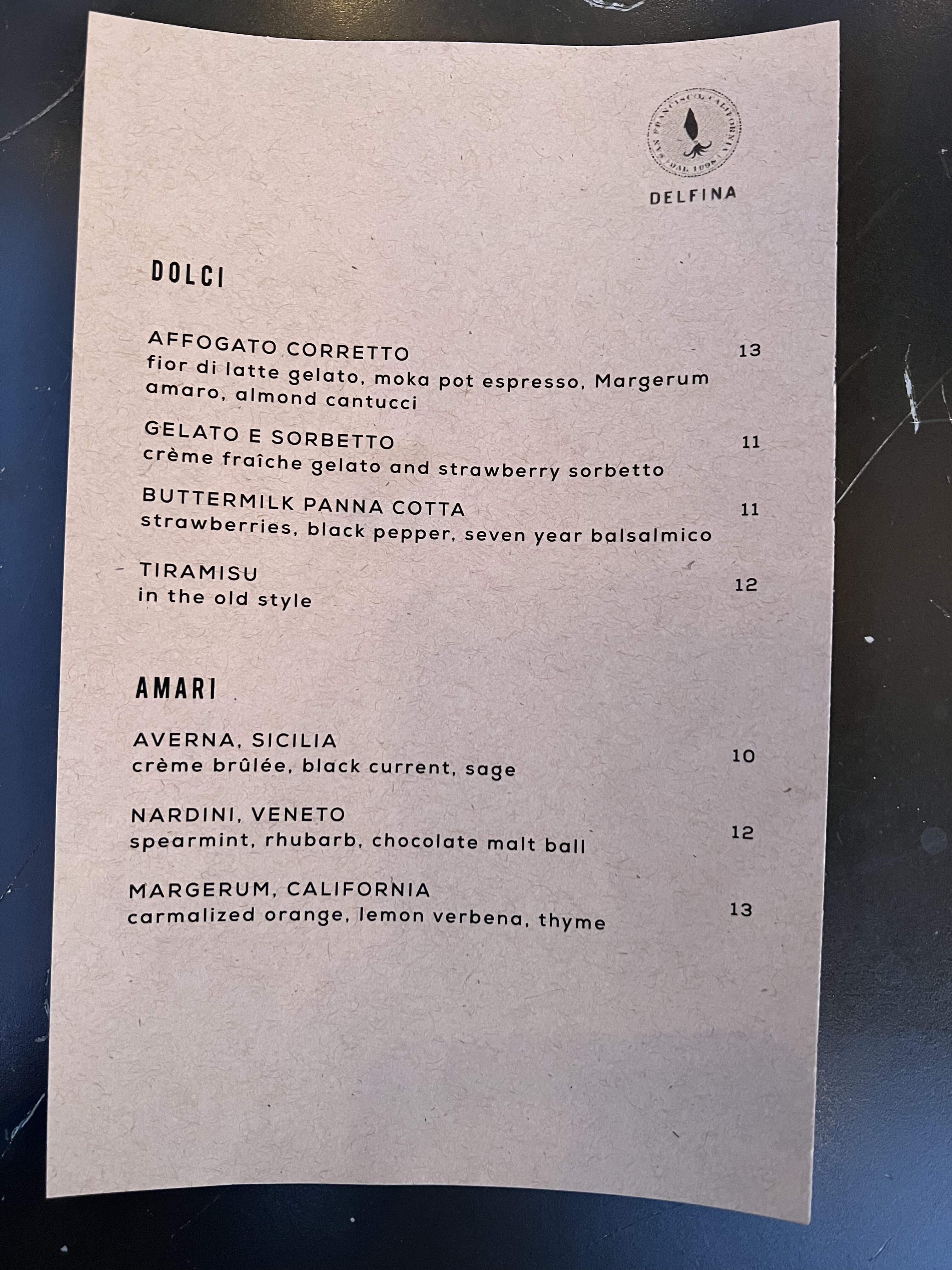 Thanks for this! Delfina’s grilled calamari with rice beans is the dish by which I judge ALL squid dishes, Few come even close.

Looks very good - only the focaccia looks more like a ciabatta

I haven’t been to San Francisco since before the pandemic, so I’m glad Delfina is going strong, as I’ve gone there on trips to the City by the Bay since the year it opened, and thanks for the pictures! Just a side point about cantucci/cantuccini: in Italian, the word is completely synonymous with biscotti di Prato, which Americans call just plain “biscotti” for short. Prato is a city very close to Florence from where this type of biscotto comes from (in spirit when not in reality).

Just a side point about cantucci/cantuccini: in Italian, the word is completely synonymous with biscotti di Prato, which Americans call just plain “biscotti” for short. Prato is a city very close to Florence from where this type of biscotto comes from (in spirit when not in reality).

I see, thanks for the info! After some Googling apparently biscotti just means biscuits/cookies in Italian

I had another nice dinner at Delfina a few weeks ago.

I started wiith the
GRILLED MONTEREY BAY SARDINES ($22)
caponata, pane pomodoro, fennel oil
Delicious! The sardines were meticulously deboned outside of the tail and head, and filled with kind of an aioli. They had a slightly charred smoky skin and were very good. It came with a piece of tomato rubbed toast and a caponata, which is a sweet-sour Sicilian dish made with eggplant and vinegar. 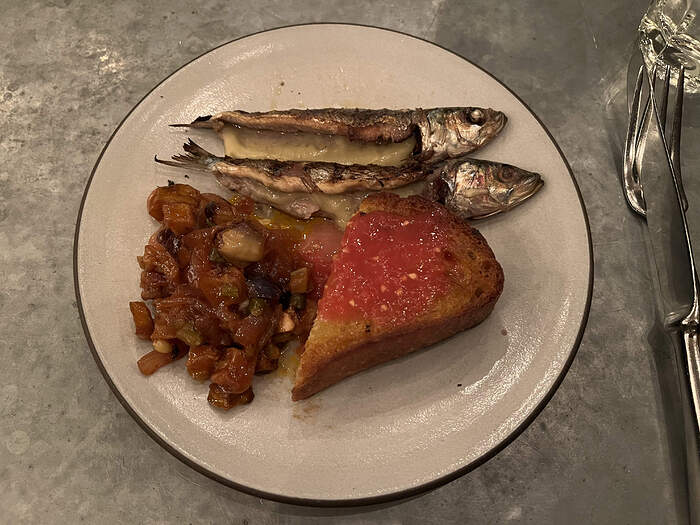 For a “main” I had the SPAGHETTI POMODORO ($25), which is one of their signature dishes. Just a simple spaghetti, cooked nicely al dente, in a tomato sauce with basil and olive oil. A simple dish executed well. 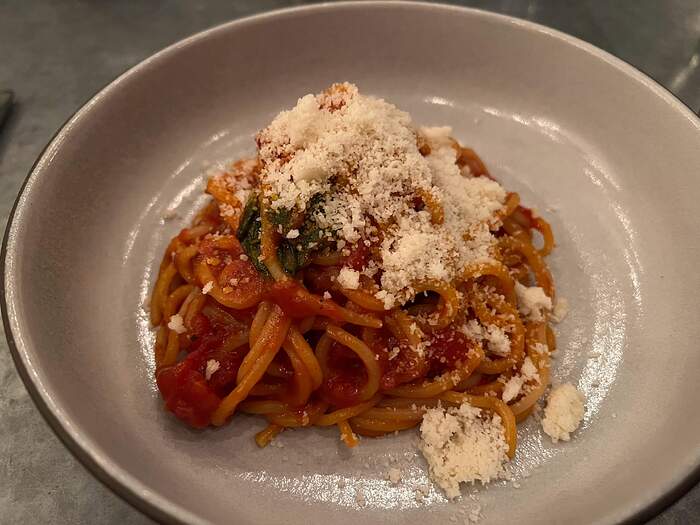 Also had a side of
CHARRED JIMMY NARDELLO PEPPERS ($15)
anchovies, capers, breadcrumbs
Which were still in season. Sweet peppers with a little smokiness from the charring, flavored with the salty anchovy and capers with a little crunch from the bread crumbs. 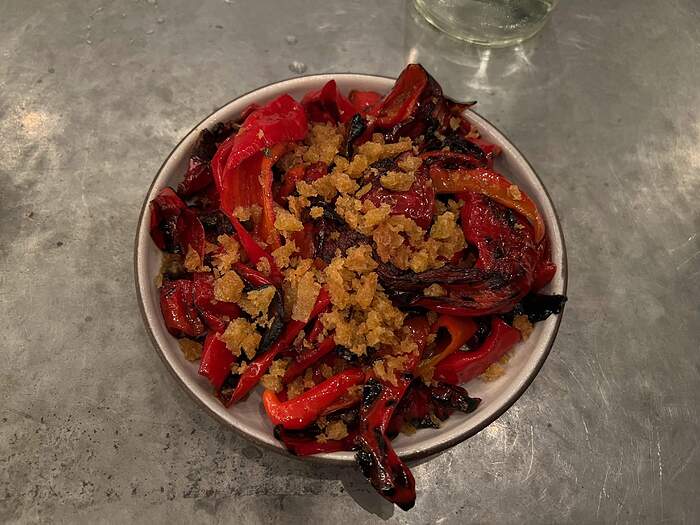 And for dessert I had their TIRAMISU ($12) which was a nicely executed tiramisu. Moist but not soggy, with shavings of bittersweet chocolate. 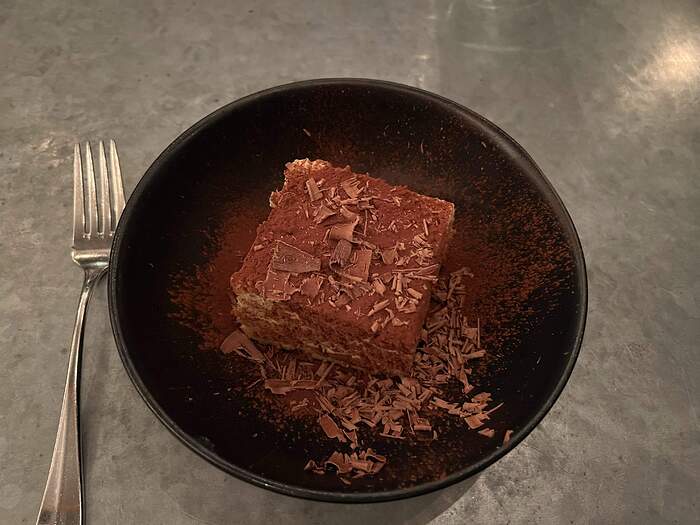