Culinary Institute of America Tour and Lunch at Bocuse (NY)

My parents came for a visit last week and asked to go up to the CIA in Hyde Park to check out their tour and have a meal at Bocuse, the French restaurant on campus. My brother went to culinary school in Chicago some years ago and they enjoyed their tour of his campus, so I think they were hoping for a similar experience here, as well as some basis for comparison.

We started with lunch at Bocuse, which I wasn’t especially excited about - I had seen the menu online and while everything looked fine, it was a little pedestrian. Turns out I was right - while the meal was generally fine, there was absolutely nothing that stood out, and it was incredibly overpriced (first courses in the $12-15 range, entrees around $30) given the quality of the food and portion sizes. Furthermore, the service was absolutely laughable - I know these are kids and not the pros I’m used to from dining in NYC, but supposedly they are there for rigorous training and there was zero evidence of that. Two courses plus dessert took THREE HOURS, in a restaurant with perhaps 10 tables taken and at least 15 people on the floor doing various service tasks. We never received refills or offers of more bread after the first pass, we had to refill our own wine glasses from the bottle left on the table (a white and not in a chilling bucket) - just very amateurish all around.

Here are some food photos - between the four of us, we tried quite a bit of the menu. My foie gras terrine was quite good, served with an interesting “whipped” brioche that had a fascinating texture, but the other appetizers, pork belly and a beef truffle soup, were very lackluster - the pork belly was basically drowned in sweet components (cider glaze and apple butter) with no balance, and the soup was totally flavorless - salt helped, but there was no discernible meat or truffle flavor either. Mains were a rubbery duck breast (inadequately rendered skin), a TERRIBLE, tough/rubbery pasta with “black truffle” sauce (in quotes because it didn’t taste anything like truffles), and steak and mussels, both of which were okay but nothing special. The mussels were oddly served with rice pilaf on the side, and no bread was offered to sop up the broth (which was really very nice). We eventually were able to flag down our waiter and ask for bread, but he was so slow to come back with it that we had nearly finished our meal by the time it arrived. 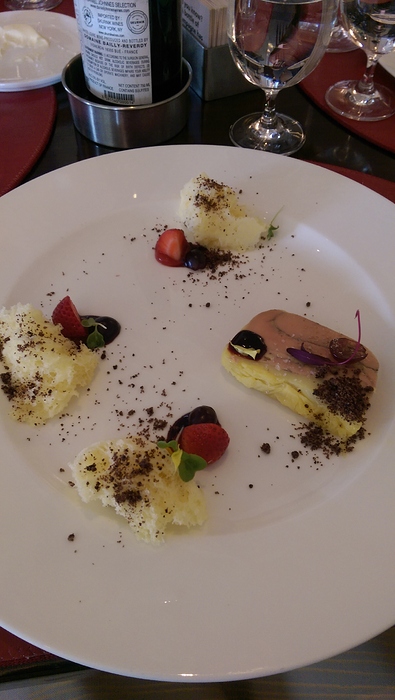 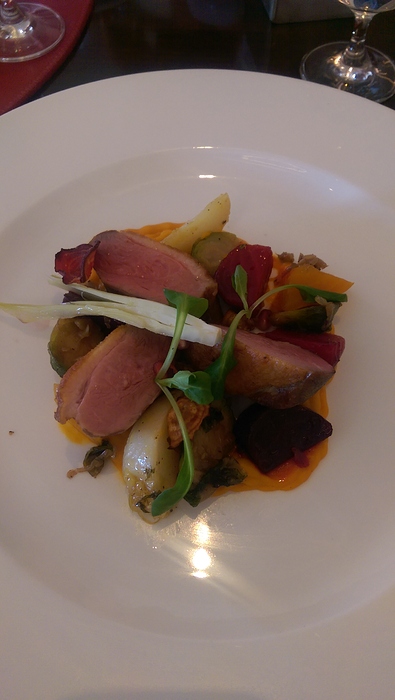 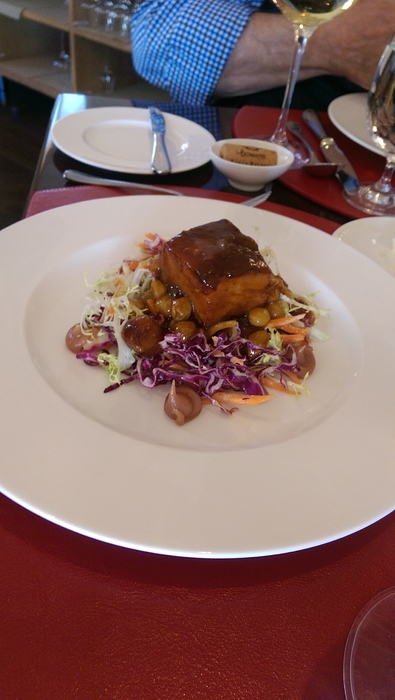 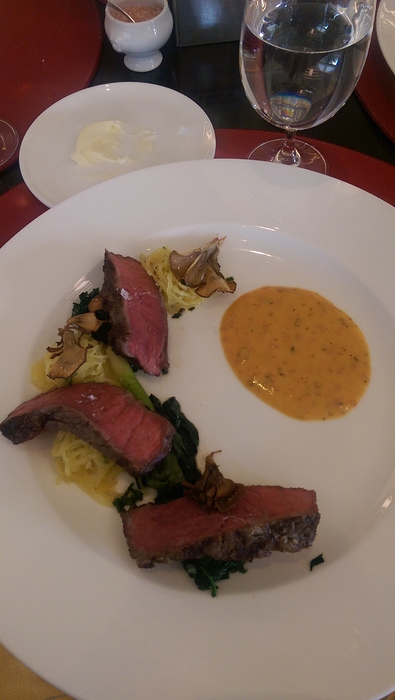 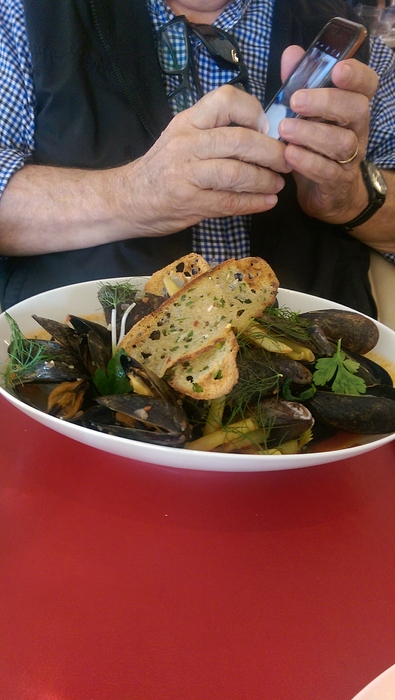 For dessert I had a chocolate trio and my mom and DH shared the tableside ice cream preparation for two, both of which were actually pretty good - I’m not a huge sweets person but I think this was the strongest course, perhaps because it is all prepared in advance by the students in the baking/dessert classes. I had to chuckle about the ice cream, though - they did a liquid nitrogen prep with a mixer at the table, and while that is fun if you’ve never seen it before, it is certainly not avant garde anymore, and they talked it up like it was the most cutting edge molecular cuisine technique imaginable. I forgot to take pics of this course, but hey, it’s ice cream, you know what it looks like!

There was another service-related issue that was partially my fault but I thought it was poorly handled, or at least not handled in the way it would have been at a NYC establishment in this price range. I don’t know if you can see it in my photos, but there were thick faux leather placemats at each seat - they were at least a quarter of an inch thick. However, they were too large to be completely covered by the plates, but too small to hold both a plate and a wine or water glass. Glasses ended up teetering precariously on the edge several times, and once a server who was refilling my water glass nearly knocked it over (through no real fault of his own). He apologized profusely, but truly it wasn’t his fault - the placemats are just terrible. Anyway, I had a full glass of red wine on the table at one point (full because it had been served to me fridge-cold and I was letting it come up to temp) and accidentally brushed it with my hand as I was reaching for something my dad was offering me across the table. If it had been sitting on a flat surface, it wouldn’t have tipped, but on those stupid placemats it went right over - ALL over my mother and her white top. The floor captain rushed over with napkins and such, but I ended up having to clean up most of the mess myself. No offer was made to replace the wine, nor was it removed from the bill. Now, obviously I spilled it, so the restaurant was under no obligation to replace it, but it would have been a nice gesture, and most restaurants of this type in NYC would have at least offered, especially since they have to be aware of how easy it is to tip things off those placemats. Heck, I have had restaurants in NYC comp or replace things that were spilled when they were ENTIRELY my (or my drunk friends’) faults.

So, after three hours and $350, we came away pretty dissatisfied and lacking time to go to the mall to get my mother a new shirt before the tour! We just wandered the grounds (which are lovely) a bit to kill time until the tour, which again was a completely disappointing experience. They send you off with a student, who walks you by three different rooms with some baking equipment, a few display cakes, an auditorium, a dining hall and a couple of the restaurants. He had a canned speech about the curriculum, schedule or student life at each stop, but nothing of substance and never a word about culinary arts program. No view of any kitchen, either in the school itself or in any of the restaurants. My parents were incredibly disappointed - they said the tour they received of my brother’s school was 100x more interesting and thorough, not to mention free (instead of the $6pp we paid for this one).

In short, I wouldn’t recommend the tour or the restaurant, unless you have a kid considering the CIA or you’re considering going to school there yourself. We had lunch at Agern in Grand Central on Monday for approximately the same price and the meal and whole experience were light years ahead of Bocuse - and this would be true of nearly any restaurant NYC.

Thanks for posting. It really sounds awful. And so expensive! I’ll definitely be skipping this one.

Oh no!!! What a disappointing experience all around!
It’s been ages ago but my ex went to CIA and then returned several years later to complete the BA course, at which point i frequently visited for the weekend.
Back then we ate at the restaurant several times, it was definitely significantly cheaper at that point, i want to say under $50 for the meal per person for three courses. I only recall that they had no idea what to make me (vegetarian, no cheese or dairy) and that it felt like random sides on a plate- unfortunately still very common.

Really unforgivable that they didn’t comp that glass of wine and get you another one. At least you got a giggle out of the "new and innovative " ice cream!

We went to CIA last summer and were underwhelmed

We just came back from a short trip up to Rhinebeck and had dinner at CIA - American Bounty. I never wanted to go there but went because someone we knew who had been a manager at a restaurant we love in our area is now managing all the CIA places and told us come up. Also, people seem to like American Bounty. Let’s start with when we got there and could not find the visitor parking lot, which was not very clearly marked. Finally found it and took the elevator from the lot to the top floor, as …

Sorry that you didn’t enjoy your meal.

Yes, that is confusing for Americans in France as well! No idea why our language decided to borrow the word entree from French and then use it for a different thing, but there you have it.

Blame the English! They started the error.

Actually, there is indeed a good explanation for why Americans do this. They got it from the English. At some point in the 18th century, the English began using entree to mean “a ‘made dish’, served between the fish and the joint”. But in French, entrée was defined as “qui se servent au commencement du repas” (“serving as the commencement of a meal”). So the English got it wrong first, and that “wrong” meaning simply stuck in America once it arrived here, while the French doubtless harangued the English so much about misuse of the term that the meaning was corrected in the U.K. (well, maybe not, but…).

In America the word eventually came to refer not to the ‘made dish’ (which was often a ham) but to the main course (usually a ham or some other meat).

Entrée Does Not Mean Main Course!

When did it become okay to call a main course an entrée? You don't need to be a French speaker to translate the word -- it means entrance, as in entry in...