Cruciferous vegs are good for your gut 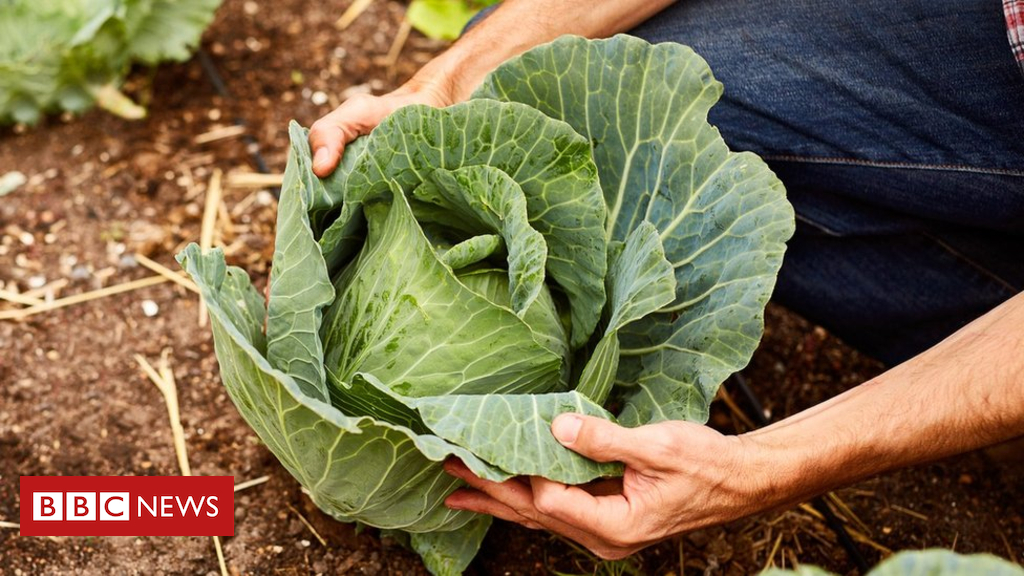 How the humble cabbage can stop cancers

Researchers reveal how chemicals in some vegetables can prevent bowel cancer.

Scientists say they have discovered why some vegetables - including cabbage, broccoli and kale - can reduce the risk of bowel cancers.

That cruciferous veg is good for the gut has never been in doubt but a detailed explanation has been elusive.

The team at the Francis Crick Institute found anti-cancer chemicals were produced as the vegetables were digested.

Cancer Research UK said there were plenty of reasons to eat more veg.

The work focused on how vegetables alter the lining of the intestines, by studying mice and miniature bowels growing in the lab.

Like the skin, the surface of the bowels is constantly being regenerated in a process that takes four to five days.

But this constant renewal needs to be tightly controlled, otherwise it could lead to cancer or gut inflammation.

And the work, published in the journal Immunity, showed chemicals in cruciferous vegetables were vital.

From kitchen to cancer prevention?

The researchers investigated a chemical called indole-3-carbinol, which is produced by chewing such vegetables.

The chemical is modified by stomach acid as it continues its journey through the digestive system.

In the lower bowel, it can change the behaviour of stem cells, which regenerate the bowel lining, and of immune cells that control inflammation.

The study showed diets high in indole-3-carbinol protected the mice from cancer, even those whose genes put them at very high risk of the disease.

Without the protective diet, the gut cells divided uncontrollably.

Dr Stockinger added: “Even when the mice started developing tumours and we switched them to the appropriate diet, it halted tumour progression.”

Signs of bowel cancer include persistent:

Dr Stockinger said the findings were a “cause for optimism”.

She has reduced the amount of meat she eats and now consumes a lot more vegetables.

She told the BBC: "A lot of dietary advice we’re getting changes periodically - it is very confusing and not clear cut what the causes and consequences are.

"Just telling me it’s good for me without a reason will not make me eat it.

“With this study, we have the molecular mechanisms about how this system works.”

Prof Tim Key, from Cancer Research UK, said: "This study in mice suggests that it’s not just the fibre contained in vegetables like broccoli and cabbage that help reduce the risk of bowel cancer, but also molecules found in these vegetables too.

“Further studies will help find out whether the molecules in these vegetables have the same effect in people, but in the meantime there are already plenty of good reasons to eat more vegetables.”

Since I’m a big cabbage fan, and try to incorporate it in many meals through the year, I heartily endorse this thread.

Long ago I had a friend working in a nursing home. There were persistent problems with bed sores that weren’t responding to traditional methods. She got permission to try cabbage poultices and to amazement of the docs, the poultices were effective.

Enjoy the veg spectrum for the flavor and variety. The health bennies are a big plus. I buy some form of cruciferous every time we shop.

In the winter when fresh veg are lackluster i buy tons of that mix! I like it as a massaged salad but also makes a great quick sautéed side dish, and i’ve added it to soups too

Cabbage leaves have been used for ages to ease joint pains. Saw a piece on TV in the gym recently. Doctor wraps cabbage leaves around a patient’s ankle, works just fine without taking meds. Unfortunately the TV screen was a bit far away from the machine I was using, but did look it up later and found this:

Efficacy of Cabbage Leaf Wraps in the Treatment of Symptomatic Osteoarthritis of the Knee: A Randomized Controlled Trial.

Osteoarthritis (OA) of the knee is one of the most common chronic diseases among older adults. This study aimed to test the effects of cabbage leaf wraps (CLWs) in the treatment of symptomatic OA.Patients with OA of the knee at stages II to III (Kellgren-Lawrence) were randomly assigned to 4 weeks of treatment with CLWs (daily for at least 2h), topical pain gel (TPG) (10 mg diclofenac/g, at least once daily), or usual care (UC). The primary outcome measure was pain intensity (VAS) after 4 weeks. Secondary outcomes included functional disability Western Ontario and McMaster Universities Arthritis Index (WOMAC), quality of life (SF-36), self-efficacy (Arthritis Self-Efficacy Scale-D), physical function (30 s Chair Stand Test), pressure pain sensitivity (PPT), satisfaction, and safety after 4 and 12 weeks.In total, 81 patients were included in this study (42 women, 65.9±10.3 y). After 4 weeks patients in the CLW group reported significantly less pain compared with those in the UC group (difference, -12.1; 95% [confidence interval] CI, -23.1, -1.0; P=0.033) but not when compared with the TPG group (difference, -8.6; 95% CI, -21.5, 4.4; P=0.190). Significant effects were also found in WOMAC, SF-36, 30-second Chair Stand Test, and PPT scores in the CLW group compared with the UC group. Compared with TPG, effects from CLW were found for WOMAC after 4 weeks and for quality of life after 12 weeks. Patients were satisfied with both active interventions, and except for 2 adverse events in both groups the applications were well tolerated.CLWs are more effective for knee OA than UC, but not compared with diclofenac gel. Therefore, they might be recommended for patients with OA of the knee. Further research is warranted.

I love cruciferous vegs, their bitterness, tastes and textures. People hate the bitter taste and rank smell. The rank smell is often the result of overcooking which is a crime against food. I have a high tolerance for bitter taste so no problem there.

Last summer when it was so crazy hot my poor friend was eight months pregnant and had terrible swollen ankles often- what helped the most was when her mother in law finally convinced her to use cabbage wraps! Was definitely fragrant yet very effective

Cabbage leaves have been used for ages to ease…

For the oft occasioned bloody nose (before I was big 'nuff to ward off my mom/grandmom), I would have a plug of bok choy or whatever green vegetable shoved up my nose to stem the flow. Dunno if the green tampon actually helped, but at least that didn’t hurt. Just felt rather silly when other kids were around.

I tried looking up the definition of cruciferous vegetables, here are a list of them:

Are we only talking cabbage, broccoli, kale here? Or all cruciferous vegs?

I’ll eat any of those except watercress. The last time I bought a bag it threw off my taste buds for a couple days. Weird, I know, but nothing tasted right. Must be an individual anomaly

I ate my weight in Brussels sprout salad this summer. The version from Costco is very good if you catch a fresh delivery.

I make my own with the Costco Brussels. Get to use what ever salad greens and root vegetables are in the fridge. Makes a nice salad meal. I love making dressings to complement the ingredients

I have made this brussel sprouts and kale salad many times- and my vegetable adverse mom even likes it! Definitely need a mandolin and cut proof glove or food processor for the sprouts, they have to be super thin.
And i massage in the dressing and let it sit several hours before serving. When making for myself i add olives and omit the cheese- but I’m sure it’s better with the cheese! We had it as a main dish, parents added a poached egg, i added smoked tofu 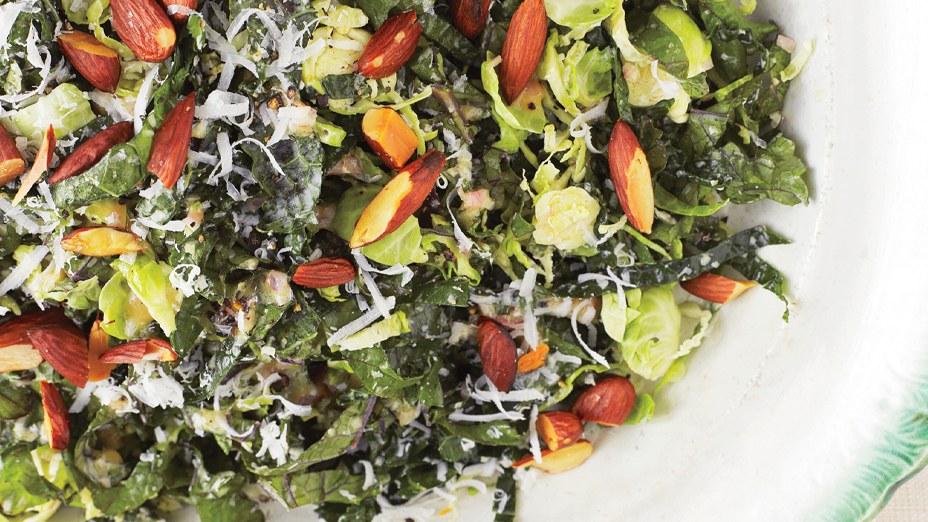 Smoked tofu…be still my heart. I cant really explain my tofu devotion but there it is. 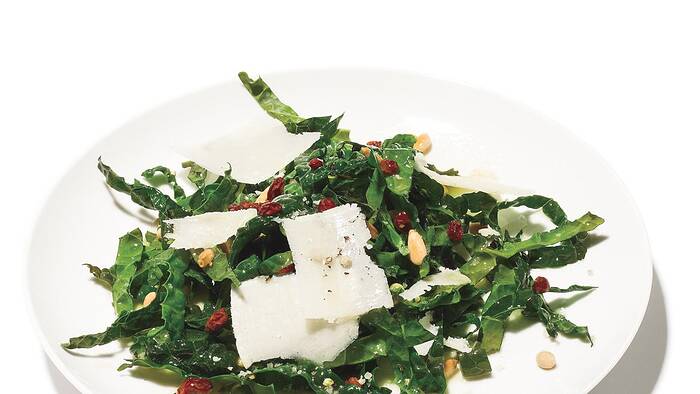 In a surprising twist, Tuscan kale is served rawand makes for a substantial and satisfying winter salad. Be sure to choose bunches of Tuscan kale with small leaves, which are more tender.

I love all these vegetables. After a 2nd kidney stone a few years ago that sent me to the ER and surgery the next day I tried to limit my intake of kale but still eat a lot of brussels. Now I’m reading these vegetables reduce the incidence of kidney stones

I hadn’t been eating many crucifers the last 3 years because they contain a lot of Vitamin K, which counteracts with blood thinners. I cook for a person who takes blood thinners.

I’m past the age of getting pregnant so I didn’t think it was a big deal to drop my own crucifer intake since I didn’t especially need folic acid. I was still getting the other vegetables, lower in Vitamin K.

I found out I’m lacking Vitamin D and I need even more calcium (I’ve been a salmon and dairy person my whole life so this was a shock) recently, so my dietitian told me to increase the kale and bok choi.