I was just talking with my niece who lives in Round Rock about crawfish boils. She commented that in the Austin area something she is seeing added to boils is pineapple. WHAT! She thinks this is because of the number of boils that are being done by Vietnamese members of the community. Is that something you are seeing in your part of the world? I don’t want to say that I consider that a crime against the Crawfish Gods, but I don’t know. What is showing up in boils in your area that is beyond crawfish, potatos, corn, and garlic? The last boil I went to here they had added shrimp and that is okay in my book. $15 for all you can eat and I can eat some boil. But pineapple? What say you?

I say: pineapple belongs in a crawfish boil just as much it belongs on pizza, which is to say, NEVER.

The last boil I went to added sausage to the mix, and also sweet potatoes along with the regular potatoes, and that was just fine. But steamed pineapple, tinged with crawfish and Zatarain’s, just sounds disgusting. Grilled pineapple is wonderful, but that is a whole other thing.

I don’t think it’s common here in Houston where Viet/Cajun is actually “a thing”.

A quick GoogleSearch showed no results.

We tend to like 'em spicy. I could see some kind of sweet sauce maybe, but mostly just spicy.

It seems to me pineapple would make the crawfish mushy. People use pineapple or it’s juice to tenderize meat, so it seems odd to add it to a crawfish boil.

I don’t think it’s common here in Houston where Viet/Cajun is actually “a thing”.

I’ve broken bread with this Doobs fella and while I generally don’t trust him he’s it right on this one.

Houston has a China/Vietnam Town that stretches out west at least halfway to San Antonio. While I haven’t braved the traffic I’ve heard the prevailing Viet/Cajun method is garlic in a spicy Cajun butter sauce.

Here’s an article on Vietnamese crawfish. 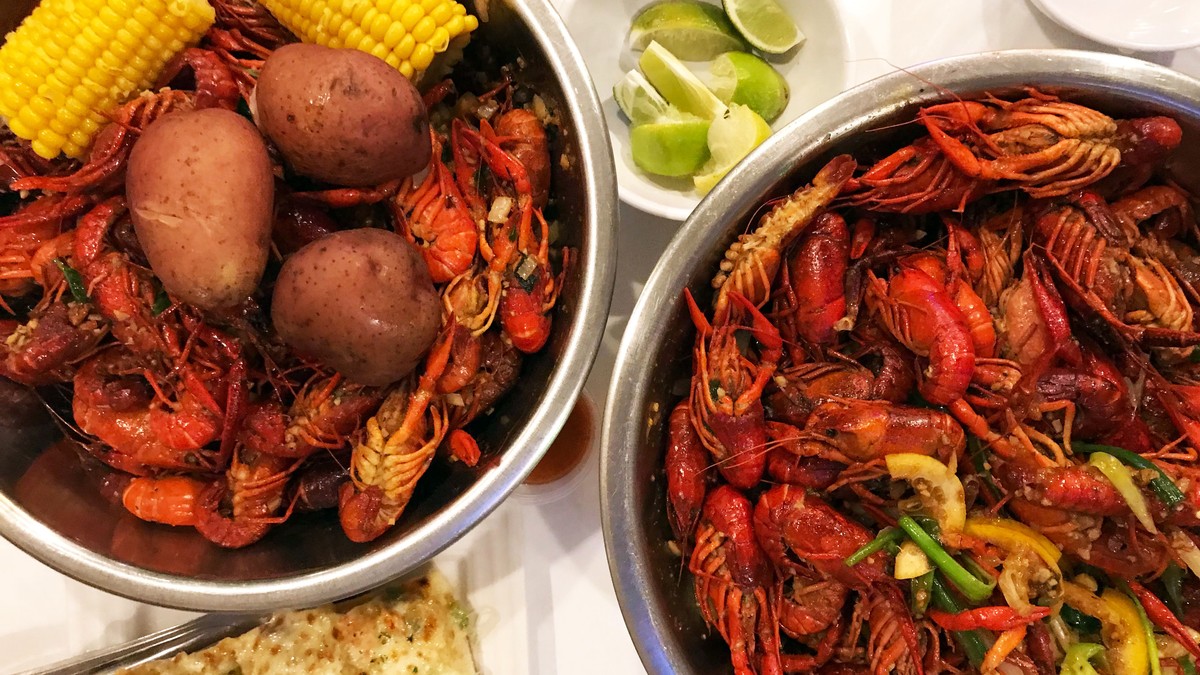 Vietnamese-Cajun Crawfish Is the American Food of the Future

Hate to steal Joiei1’s thunder but he started the thread over on eG, too, and a poster from NYC reports on attending a boil in Mississippi recently where this was done. Most of the attendees were from NOLA and they loved it. It’s not so much about the crawfish as it is about the pineapple - he says the slices were very tasty.

Okay JC or Doobs, which one of you is going to throw a boil so all us Houston HOs can give it a try???

Don’t look at me!

I’m willing to pay restaurant prices so I don’t have to deal with the aftermath.

But I’ll be happy to help mess up JC’s house.

I had crawfish last weekend that had mushrooms in them, those were some mighty tasting mushrooms. Pineapple is too, well pineappley to me in crawfish. I like pineapple straight, maybe with a touch of Tajin.

I had crawfish last weekend that had mushrooms in them, those were some mighty tasting mushrooms.

That sounds good to me. What kind of mushrooms?

I may try a crawfish-less crawfish boil (less mess to clean up/less expensive).

Buy a pineapple, some crawfish boil mix (or make my own), mushrooms…, of course could add potatoes, onion, corn on the cob - what else?

ETA: Meant to mention above, re: the Mississippi boil - the poster reported that as far as he could tell, the pineapple didn’t affect the taste or texture of the crawfish - it tasted like a standard crawfish boil.

ETA2.0: This was supposed to be a reply to Lambowner.

I may try a crawfish-less crawfish boil (less mess to clean up/less expensive).

Buy a pineapple, some crawfish boil mix (or make my own), mushrooms…, of course could add potatoes, onion, corn on the cob - what else?

ETA2.0: This was supposed to be a reply to Lambowner

They were button mushrooms, but really small by the time they were boiled, and intensily cajun flavored including all that saltiness, which I like. There was just a few of them.

I find it odd that pineapple doesn’t affect the texture since it is used as a meat tenderizer. In fact, Pappasito’s marinates their fajitas in 1/2 pineapple juice and 1/2 soy sauce. Try it. 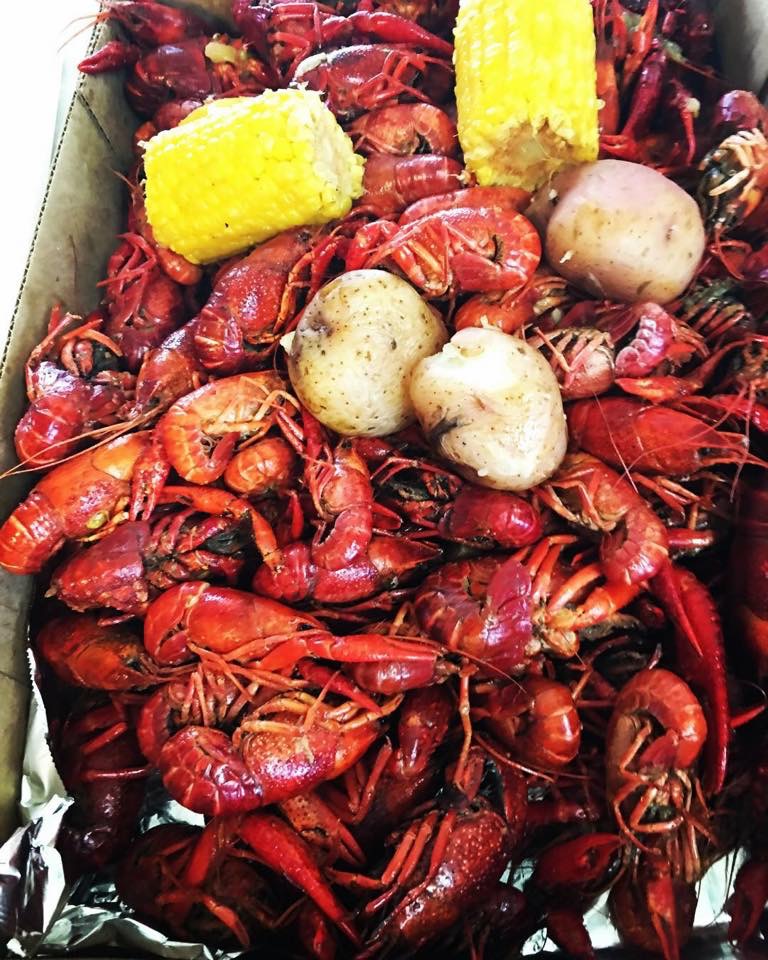 I’m pretty sure those are potatoes.

See, for example, about 1-1/2 inches Southwest of the first potato l-r.

I had some leftover jumbo shrimp in the freezer I wanted to use up so I decided to do a shrimp boil. The only pot I have large enough to do it all at once won’t function on my Vollrath Cadet and I ain’t settin’ up a propane burner outside in this heat, so I did the boil in 2 stages. Some people do that anyway to better control the done-ness of the potatoes and that appeals to me. Potatoes, onions and garlic went first; they were removed and held aside while the second half of the boil was underway. I anticipated that would be a lot shorter holding time than it was. I put in pineapple and then mushrooms after a few minutes, then corn after another few minutes (I don’t like the corn to get mushy but apparently some do). Shrimp went in last and when it started floating back to the top I shut off the heat. I only let it soak a few minutes.

Potatoes were fine, corn was good but unbelievably sweet, shrimp were perfect. Pineapple - I’m not sure I get the purpose of this. My seasoning mix wasn’t potent enough, that’s part of the problem, but I’m not sure what is the goal of adding this. I couldn’t detect that it affected the flavor of the corn, mushrooms or shrimp, so maybe it’s jst about flavoring the pineapple. The mushrooms - Lambowner had mentioned them being all shriveled up and I couldn’t see any in her picture. I had bought the biggest button mushrooms I could find and added them whole. They shrank a little, but weren’t cooked through and didn’t pick up much flavor. They definitely need to go in earlier.

It wasn’t until after eating it all I realized I had looked up recipes online to get suggestions for the seasoning mix but had never thought to look for the specific ideas of pineapple and mushrooms as add-ins. Doh! I found this from the Times-Picayune:

I like the artichokes, maybe serrano peppers, and ravioli

, but a can of chickpeas, punctured??? To each his own, I guess.

Regarding when to add the pineapple, I found this discussion on Tiger Droppings (LSU):

Input on whole pineapple in crawfish boil. Thanks

Input on whole pineapple in crawfish boil. Thanks - Slice it? When to put it in? What y’all think?

Some put it in at the first, some not until the soak, and some think it’s an abomination. I think I’ll try it at the beginning next time.