I try to put as little food down the drain as possible, mostly freezing it in old ice cream containers and putting out with the trash. This includes oil, and any leftover over bits of just about everything.

But one of my favorite meals is shrimp mixed with egg, oil, and cornstarch which is shallow fried. The problem is this stuff sticks to the final mixing bowl like glue and requires hot water to clean. This results in a cornstarch slurry which I am hesitant to pour down the drain, and is of sufficient volume where freezing isn’t really an option.

So my questions are:

1.) does a really diluted mixture of this affect drain pipes or septic systems?

2.) and if so, can I just pour it out into my yard? I live in a forest in the Sierra-Nevada and want to be sure there are no environmental repercussions.

Putting it the yard would attract a lot of critters. We have 2 Australian Shepherds who would go nuts chasing them (or they would eat it themselves and then have diarrhea). I would not do that. We have a septic system. It costs a veritable sh!tload of money when we have it pumped. So we go the trash route…we never flush food into our septic.

Agreed. I guess i’ll line the bowl with a ziploc bag next time, though not a big fan of adding plastic to trash (but better to preserve the septic system - and not attract any more critters).

I’d probably drain off water, then scrap into some waste paper (newspaper in case you are a dinosaur like me). Wrap up and treat as trash.

Or would it work to save cardboard containers like from ice cream and use them as bowls? Certainly the half gallon should work. Maybe the quart?

I save paper pints for final trash disposal of cooking oil s and other non-compostable scrap.

In California now, a lot of cooked food and dirty cardboard goes in the green bin. Do you have that where you are?

I save paper pints for final trash disposal of cooking oil s and other non-compostable scrap.

Me too, but they aren’t big enough for this dish. And Ice cream in bigger containers suck!

In California now, a lot of cooked food and dirty cardboard goes in the green bin. Do you have that where you are?

I do… but what do I do the two hour marinade and cornstarch coating in?

I’m still sorting this out, but what about nothing? I mean marinate in non disposable stuff, then you just scrape it on to your grass/food waste/yard clippings with a rubber spatula?

In my city we got these, 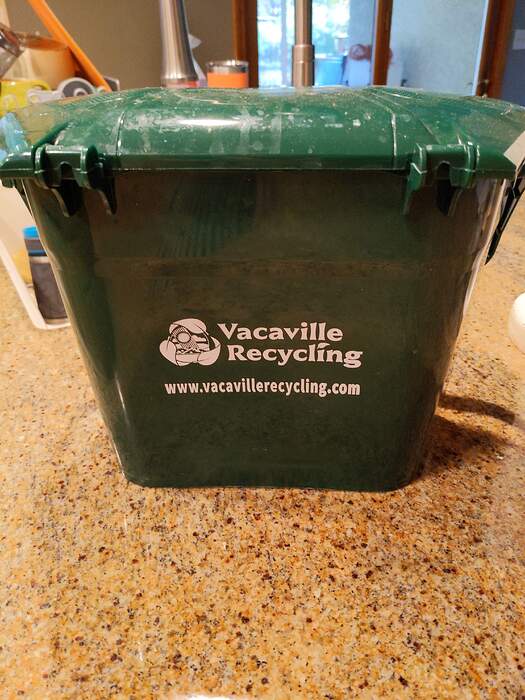 Which I initially lined with these. 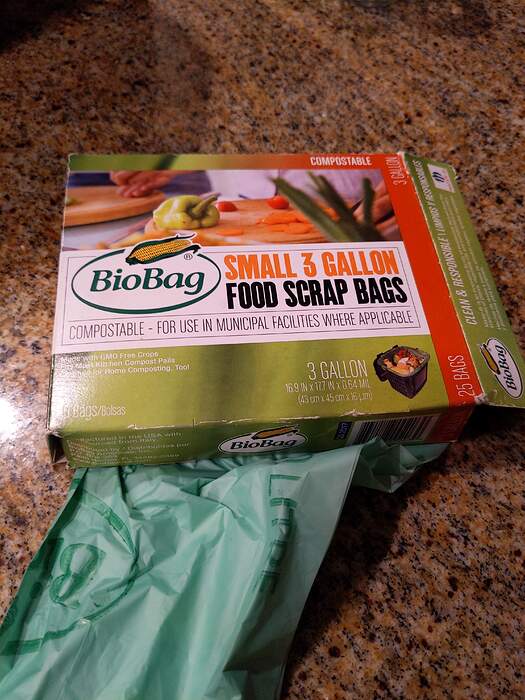 … which they explicitly said don’t do. No plastic, even “recyclable”. Holds about a quart.

They say line with paper towels or napkins, consider this a “gift”, and rent (from them) or buy the size that suits you.

Still sorting it out. Happy to put dirty cardboard in there.

My green vessel is 60 Gallons (I think)… 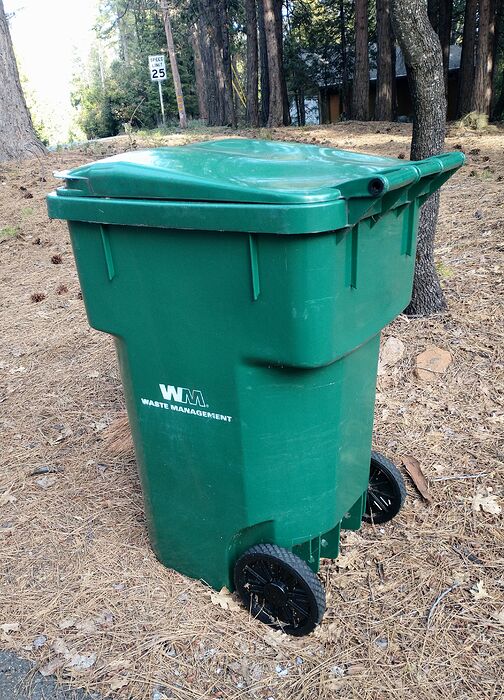 But it is supposedly “yard waste only”… at least that is all I’ve ever used it for. Not sure how they would feel about me putting food in it.

Problem is I really need to rinse the mixing bowl with hot water to get the cornstarch out of it (it is literally glued to it), but after removing all that I can via a spoon or spat, it is a pretty light mixture of cornstarch and water. Hard to imagine they would notice (or care) about this water being added to the pine needles, cones, leaves, and branch bits I put in this every two weeks.

We have that one, and got the kitchen counter one a few months ago when the law changed. We may have been the only city in the county to get the kitchen one and a new brochure, but I think the law changed for everyone in California . You might want to check your local recycling website. No consequences (fines) for quite awhile.

What’s strange to me in retrospect, is that I remember my mom getting a fine in Queens in the 70’s!

In SF, we green bin all yard trimmings and all kitchen scraps;. I have a countertop bucket that I line with a compostable bag into which I dump all kitchen waste. As I wrote, I keep pint all-cardboard containers (like ice cream) and fill them with liquid or oil waste so that it doesn’t mess up the rest. Not that the rest isn’t destined to mess…

El Dorado Disposal (which is our WM representative) only has a “pilot program” at this time, which I have not been selected for (which I assume is par for the course for residents of a small town). So hopefully that will change going forward.

Nice; especially the oil waste ! I HATE that …unless it’s bacon fat!

Has your green bin always included cooked food and soiled cardboard? That’s new for us, but my sister in Durham NC has had it for awhile.

I’m on a septic system also . I’m very careful of what I put down the drain . But then again I’m not tossing a bad meal or food in the garbage
I’ll toss it out in the yard under the tree. Its amazing how these large ravens will come out of nowhere and eat every morsel.

We actually toss most plate remnants out “for the animals”. We never see them, but everything is gone by morning. Melon rinds chewed to 1/16", left totally bare., Bones gone, probably carried off to some lair.