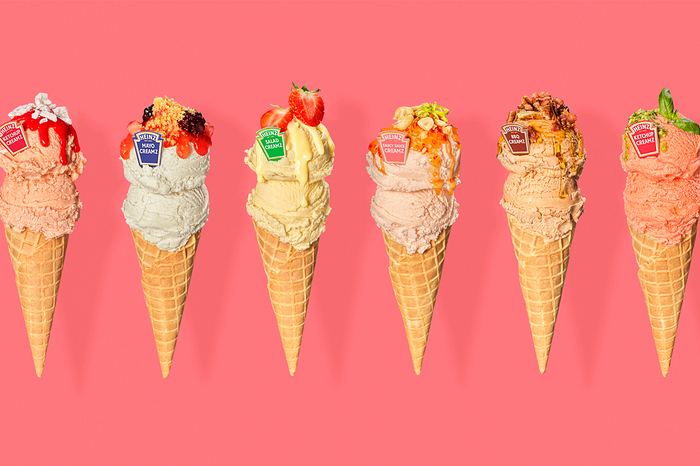 HEINZ is launching a selection of DIY ice cream kits this week – in ketchup, mayonnaise, salad cream, and barbecue sauce flavour. Using a range of Heinz sauces, the kits are intended to inspi…

I hope they keep this restricted to the UK.

I’ve had black pepper ice cream, which was quite good. That said, the Heinz ones sound gross.

Yeah, I’ve had garlic ice cream at a garlic festival and tomato sorbet at a tomato festival and they weren’t bad. Didn’t much care for the mushroom festival ice cream.

But I’m one of those people who abhors mayo, so of course that sounds godawful. And I’m not inclined to try the others. I suppose there’s a difference between ingredients like garlic and tomatoes (and pepper) that are versatile components of dishes and condiments that I associate more as toppings for hamburgers and such

Tomatoes and avocados (being fruits and all) seem pretty well suited to dessert. I’ve had garlic ice cream, too, and the less said about it, the better. I like mayo just fine, and I also like olive oil, but my one experience with olive oil gelato - which was extremely fashionable in Manhattan for a hot minute - was not a positive one.

Maybe the key to the garlic ice cream is eating it at the festival. It’s hot, you’ve spent the day eating all sorts of savory garlic samples, everybody already has garlic breath and it’s a nice frozen way to end the day.

A while back after we asked for cracked black pepper to sprinkle on house made vanilla, the Yountville Bouchon waiter returned with both pepper and report that the kitchen took note.

We think “salad cream” in the UK is something akin to a runnier version of Miracle Whip in the US ?

Corn ice cream, avocado added to ice cream base, dried carrots added by paddle and lots of garlic ice cream…also, ground spices of all kinds added to the cream base…sure have enjoyed.

What I don’t trust is the way this idea will be made/manufactured.

We think “salad cream” in the UK is something akin to a runnier version of Miracle Whip in the US ?

Maybe. I had no idea what was meant by “salad cream.” I was thinking maybe a ranch-like dressing.

What I don’t trust is the way this idea will be made/manufactured.

It looks like they send you the sauce, the recipe and a few “gold” utensils for serving. The consumer has to supply the double cream, condensed milk and whole milk. So the consumer can control the quality of most of the ingredients. But agreed the ingredients in the sauces may be suspect.

the ingredients in the sauces may be suspect.

That Famous Five salad came with “a big bottle of home-made salad cream.

Maybe worth a try, although it sounds a bit close to mayo.

After a search for the amount of ice cream this ridiculous kit might make, this came up;

Sounds like the Heinz family is grasping at straws.

So that’s what that little pita kid was talking about in Fawlty Towers. Thanks for the recipe. 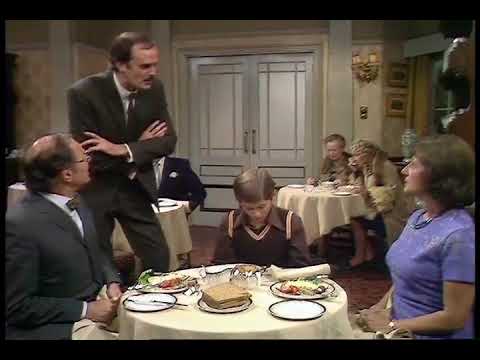 Black pepper might be interesting (I don’t think I’d like it as a major/primary flavoring, but I’d be willing to try it, and might even think it worthwhile as an adjunct to some other non-traditional flavor), but

I hope they keep this restricted to the UK.

a-m-e-n to that as far as the others are concerned… Sorry if I’m yucking someone else’s yum, but… BLECH! (As the old saying goes, just because one can  do a thing doesn’t mean one should  do it…

Maybe the key to the garlic ice cream is eating it at the festival. It’s hot,

As it happens, I had the garlic ice cream at the Hudson Valley Garlic Festival. This did not improve the experience! Maybe it wasn’t hot enough.

I wonder if some of these might be good if they were unsweetened.

Funny - on Chronicle they were doing a show on ice-cream shops, and they featured this one place called “Odd Fellows” that opened in Chestnut Hill last year. They specialize in funky flavor combos, and they had a pickle ice cream (I love pickles, but not sure I would try that) that they created for a pickle festival.