Do you have any recommendations for breakfast spots that are open before 8 AM, and which are close to 880S between Oakland and Hayward? I’m coming from San Francisco. 580E might work too if it’s quick and adjacent to an entrance/exit.

Bakeries, tortas, banh mi, and unique breakfast sandwiches are ideal because they are portable and I can save those for lunch too. Soup and congee recommendations are welcome too for those occasions where it makes sense to wait for traffic to pass.

I’m not a fan of diner style breakfasts (eggs, pancakes, waffles, hash-browns) or crepes so none of those unless they have something unique, quick, and eatable in the car.

Gum Kuo for congee in C-town.

Reem’s in Fruitvale opens a little late for you (8am).

I’ve not been to these but have them bookmarked:

I’ve never been but I did a quick search and there appears to be Cam Huong Restaurant which was successful enough to also open Cam Huong Cafe and Cam Huong Bakery (Union City). They get good reviews on their sandwiches and open at 7 am. I can’t believe they are still selling sandwiches at $3. That’s unheard of in San Jose.

There’s also Banh Mi Ba Le which I think just borrows the name from the original founder and pretty much inventor of the classic French/Vietnamese mash-up “banh mi thit nguoi” as we know it back in 1950’s Saigon. Pate, headcheese, jamon, mayonaise on a baguette. Everyone pretty much called that sandwich combo “banh mi Ba Le”.

Le Vo came to America and opened the first bakery/deli in San Jose back in 1982. I still remember that shop. Now, he’s only in Chicago.

8am isn’t too late for Reems

Oh, wow, I’ve not heard of a bunch of these, thanks!

Paramount Piroshki supplies lots of delis, and used to be in Portero Hill. Their piroshki’s are deep fried, and I don’t find them equal in quality to the baked pirsohkis available in the Richmond.

I haven’t been yet, but Paulista Brazilian Kitchen opens at 7 am and is off 580. I’ve heard good reports about lunch.

Great, I’m sure to hit up Cam Huong soon.

I had no idea about that history. I was at Banh Mi Ba Le on international earlier this week, and I’m sad to say the quality isn’t what it was a few years ago. But at 3 filling sandwiches for $10.50, I guess it’s hard to complain

I usually get a combo (Texture variation bliss) , and one other sandwich, swapping in a different one each time a visit a place, starting with a grilled pork if they have it. For vegetarian ones, I prefer the crispy tofu shreds

You have any favorites, and anyone have tips on Cam Huong?

I also prefer the classic combo of pate, jambon, and headcheese. I like when places have cucumber in addition to the pickled carrot & daikon. Grilled pork is also my #2 (not to be confused with the xa xiu / cha siu that’s commonly called BBQ pork). 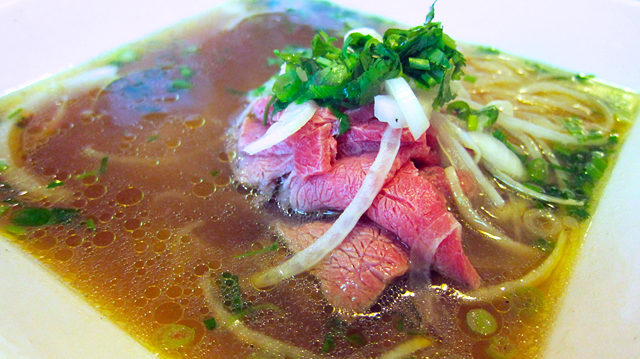 What about Chinatown? There surely must be a ton of places open in the morning?

Good suggestion— parking shouldn’t be a problem in Chinatown that early. And the bakeries are a step up from the ones I’ve given up on in Portola.

Kefa Coffee (422 29th Ave) just off the 880 in Jingletown has tasty (if a bit pricey) breakfast sandwiches. I always call 20 minutes ahead because they often have a long line.

Buiphong on International makes baguettes for lots of banh mi places. Quite good straight from the oven! They have “butter croissants”, plain and with fillings like ham and cheese. Not my thing, but inexpensive and large.

I’ve learned that International Blvd. is a surprising time suck given traffic patterns. For banh mi, I’m liking Cam Huong better than Banh Mi Ba Le, which isn’t well constructed (also, I had a overtoasted bread there once, but this hasn’t repeated). Both are crazy cheap.

Firebrand and Beauty Bagels both take about the same detour time as places on International , and you can call in orders for Firebrand ahead of time.

Hey! You said you remember the Ba Le Bakery in San Jose? Do you by chance remember any if the workers or owners? I’m looking for my father who was the son of Vo Le.

I don’t know them personally but I’d love to help you on your search! Have you reached out to the Ba Le Sandwiches people over in Chicago? From their website:
It has been over 40 years since Vo’s arrival in the United States and today, Ba Le’s legacy has been passed on to his youngest daughter Thuy. As the new heir to her father’s creation, Thuy has taken it upon herself to honor the tradition and name that her father proudly originated. The Ba Le name and brand is often imitated but can never be replicated."

Please keep me updated! We can work together!