Colts Neck has its own distillery where they are putting out their own bourbon, vodka, gin and rum. Went there around 7pm last (Saturday) night and the bar was 2 deep.

The set up is honestly odd, large round bar in a square room makes navigating around the room very tight. They do not have adequate seating besides the bar and with people 2 deep it’s not a very welcoming environment.

My suggestion is to try the mixed drinks vs the straight pours. They do not serve food but they have a food truck on premises in the parking lot, which interferes with parking, last night was Cousins Maine Lobster of Shark Tank fame. After our one round of drinks, it really wasn’t comfortable and it was 10-15mins to get our 1 round we decided we experienced enough. We grabbed some lobster tacos, lobster roll and lobster bisque from the truck to take home. FYI because there is no other seating besides the bar the only other places to eat are outdoor tables which isn’t very conducive to eating at 10degrees. Maybe in the spring and summer this will be “fun” but it really wasn’t practical for eating on location last night. The food was good, pricy as you would expect for lobster but I would definitely seek them out again.

All in all there is nothing to really bring me back. I wouldn’t care for their vodka martini and I’m not a Boubon drinker…I left and went to the liquor store to pick up a bottle of Stoli and makers mark instead of buying at the distillery as originally planned.

First of all, I need to get you to the AP Distillery. Their vodka is crazy smooth–even straight.

That said, my second comment/thought is…I don’t believe there is much out in that part of the county, so I’m not surprised it’s packed, but I know from going to the AP Distillery that they have very different ABC rules they have to follow, and I suspect one of them must limit the number of seats they can offer inside. AP Distillery’s ‘public’ space has a small footprint to begin with, and I think they have about a dozen seats at the bar, but damn if every cocktail I’ve had there hasn’t been worth the $12(ish). I don’t say this often, but these people CARE about what they’re doing, they love to talk about it if you’re interested, and I’m always happy to support them. Caveat: I’ve been in there when I could sit at the bar. Last night I walked by en route to the Biergarten and the room at the APD was PACKED with people standing 3 deep behind the chairs at the bar.

They don’t offer any food either, and I believe that’s because if they did, then they’d be considered a restaurant. And finally, every time you step foot in there, someone jumps you to ask “Have you been here before?” and regardless of the answer, they’re required to give you the ‘tour,’ which involves standing at the big window overlooking the distillery and listening to their BRIEF shpeil (sp?). Imo it’s totally worth it to then get hang time in a pretty spot with great drinks!

Yeah, I’ve been wondering about this place. Especially since my husband is suddenly on a bourbon kick and I thought a bottle of a local one would be a nice V-day present.

@CurlzNJ I think you have an excellent point. That area is really no mans land for bars.

AP Distillery makes a decent bourbon, and you can find it in a lot of local stores…even my Shop Rite liquor store carries it!

Since I live in town, my s/o and I went on opening night a few months ago. Boy, was it packed! Bill had the Stillhouse ( bourbon, brown butter, and orange bitters), and I had the Pickle Rick (vodka, house brine, and a pickle). We both were incredibly unimpressed. Bill said his drink was all mixer and ice, and the bourbon didn’t stand out at all. My vodka did stand out, because it tasted like rubbing alcohol. The brine was incredibly weak- I’ve had tastier brines sipping from the go-container from the old Pickle Guy stand at Collingswood Auction. Since they wouldn’t make me a Collins, we took off.
Bill refers to them as “Cocktails for People Who Don’t Like Booze.”

I’ve got to admit when I read:

"Since I live in town, my s/o and I went on opening night a few months ago. Boy, was it packed! "

I immediately rolled my eyes and thought: “Ok here comes a shill from a local”

Glad as I continued to read your impression was somewhat similar to mine. You had he vodka with a mixer and it tasted like rubbing alcohol, I had it on the rocks and the fist sip gave me the 'bad vodka" burn. That’s why I had to let the ice melt a bit to tone down the harshness of the vodka.

Quick question since you are from town, have you ever dined at the Green Meadow? I’m on a mission to actually find someone, anyone who has actually dined there. The place is a complete enigma to me and I have no idea how they stay in business.

Even though I’m under the age of 80, I have eaten there. Unfortunately, the last time was on Thanksgiving in the late 80s./very early 90s. I had the tiniest piece of salmon on the planet with an artfully dripped, very non-dilly mustard sauce with something like, three spears of asparagus (probably making a tower). Yes, I still remember the meal for these reasons- 1.) My late mother, who could declare herself full after eating a Hershey’s Kiss, said it was the stingiest portion she ever had and proceeded to order desert, and 2.) The check came to over $100 for three people. Golly! Nouvelle cuisine had come to Colts Neck!

I have no idea how the place survives, either. Maybe it’s where the Huddy’s crowd goes for a special night out.

Before the construction at 537 & 34 I take the Rt. 18 exit to go home so I generally pass there every night and I have only seen that one Cadillac parked out front. lol Well if your check was over $100. for 3 people 30 years ago, I guess they gouged enough people early on to keep the lights on for a few decades!

Thanks for responding to my silly question!

Perhaps you forgot that I ate at Green Meadows once. I was with my husband and our daughter who was around 10 years old at the time. So that would make it about 37 years ago.

I have no recollection of what we ate though since we never went back, the food must have been mediocre. I do remember we didn’t know until the end of the meal that they did not take credit cards, and we didn’t have sufficient cash to cover the bill. However, I did have checks with me. Even though they didn’t know us, they accepted that method of payment.

My apologies you are correct I did forget. Being similar in age to your daughter, I’m on a quest to find someone who has dined there in the last decade or two at least. I’m truly fascinated by it and might have to take one for the team sometime.

This actually made me check out their website, look at this:

15% Off Entire Check (Including Bar Drinks)

NJ Tax & Your Servers Gratuity is NOT Included

Your Servers Gratuity is NOT Included

Your Servers Gratuity is NOT Included

20% off your check Wed & Thurs. including drinks!!
50% off food (not drinks) Friday night!! I might have to go on a Friday, they make it hard not to try them

(for those who like it, they do have frogs legs on the menu, I haven’t seen that since, well probably 1982!!)

50% off on a Friday?! That is bizarre. I have always wondered about this place and if “The Polo Club at Holmdel” will ever open.

https://www.facebook.com/ThePoloClubatHolmdel/ - Working hard to reopen since October 2016 says their FB.

right up there with the cuban place in RB and the upscale Mexican spot in the old Catch spot.

But hey- Triumph in RB actually did open up after like 7 years, so who knows…

Well the location of The Polo Club, previously Remington’s has been closed for 20± years. I know the town was on the owner to reopen the location under thread of revoking the liquor license, I have a feeling, though completely unconfirmed, that the town did pull the license because work seemed to stop here about a year ago.

I first moved to the area in 1994, I purchased my first home here as a foreclosure and as I inspected the attic after purchasing the home, I found all the kitchen plans for Remington’s. Apparently the previous owner had something to do with restaurant/kitchen builds, which is why I bought the house because of it’s beautiful and commercial grade kitchen.

at least Holmdel has a few chain spots and Patricias which seems to print $$$. I can’t understand why Colts Neck other than Delicious Orchards is such a food wasteland. With the $$ there it doesn’t make sense, I mean I know they can all just go to RB, Manalapan, Marlboro, Middletown or the like but you would think that there would be one joint at least for a quick trip to keep people in town…I guess Huddys by default is the big winner…

Interesting…hope they make hand sanitizer better than their vodka!!! (sorry) 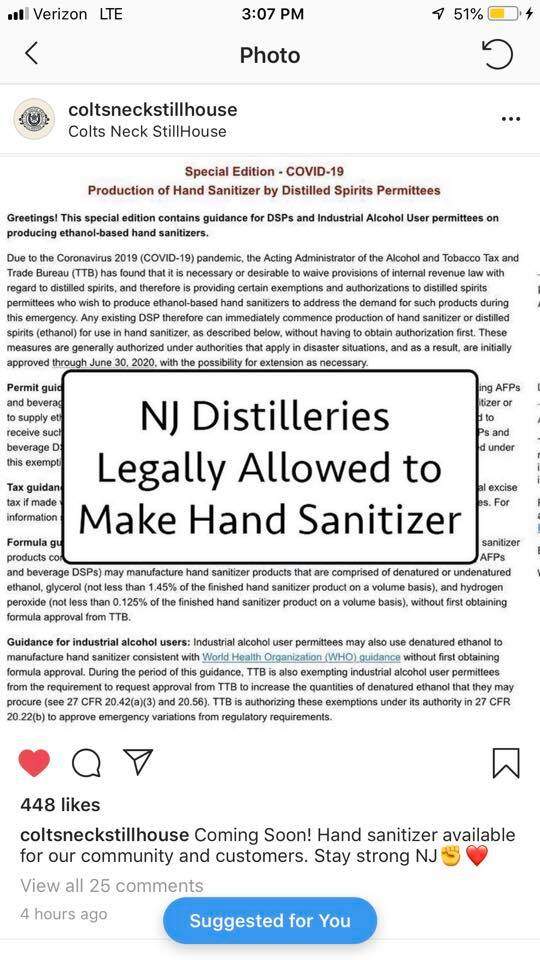 I heard Sen Joe Manchin (WV) on the news this morning mention this. Missed some of the conversation but I think there are still some logistics to work out.

There’s another distillery up in Fairfield NJ doing the same…

Seems many distillers are doing this to supplement their business.
Wonder what the Craft Beer guys are going to do.?

hope everybody is ready for IPA hand sanitizer…