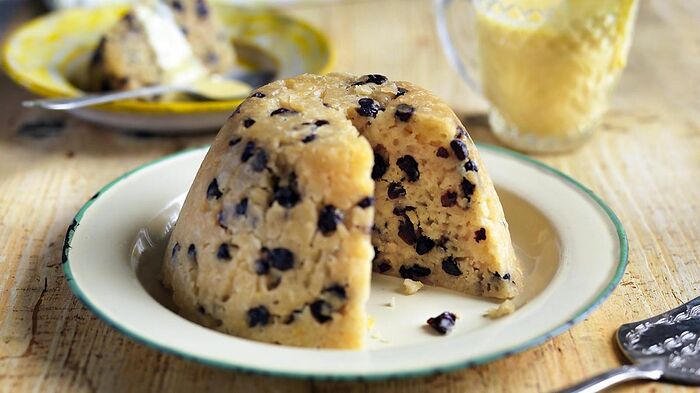 Are we losing our love of classic British dishes?

New surveys show Brits don't recognise some traditional British dishes, but why is that and does it matter?

Some dishes with offals, I believe the popularity is going down not only in uk but everywhere. There are more steps in preparation to make them tasty and most importantly the idea doesn’t appeal.

In the article, it talked about people forget how to cook. I don’t know enough, but are people cooking British food at home? I’ve an impression the brits like to eat other cuisines than their own.

naf - I think most Britons mainly cook British food - ingredients from northern Europe cooked in our traditional styles. That is not to say that our cuisine has not been influenced by immigration, by us taking holidays in foreign countries or, indeed, simply to our close proximity to, say, France. But we are obviously not alone in that. My most recent evidence for how we eat was during lockdown - I played on an off-topic Tripadvisor thread where contributors would briefly mention the evening’s dinner (a mini version of HO’s What’s for Dinner).

I think there’s some evidence of folk not cooking as much as they used to. Pretty much every time I stand in the supermarket checkout queue, I see folk with “ready meals”, just needing to be microwaved.

With regard to offal, when I was a boy, there used to be a chain of about 150 shops/restaurants called UCP (United Cattle Products) in the North of England. They sold the likes of tripe, oxtail and cow heel, all of which were traditionally eaten in the region. I don’t think they survived after the 1960s, as tastes had changed. If I wanted to buy tripe now, I’d need to go to one of the traditional market halls in one of the towns in the area - and even then I wouldnt be assured of finding someone selling it.

By the by, a French dish I’ve often seen on menus in Northern France (but never ordered) is “Le Welsh”. Basically a Welsh rarebit but adapted to French tastes. I gather it dates back to the Great War, when British troops were stationed in the area and estaminets started to offer it.

Many traditional British home-cooked dishes are both long winded to shop for and to prepare, and also find less favour with the younger generation who are more health conscious than the oldies. My 20-something sons would both rather have a chicken stir-fry than a chicken casserole.

The dishes mentioned in the article are mostly low budget, and modern households will keep costs down by dishing up burgers and oven fries rather than taking any pleasure in making cheap good food from scratch. It’s a time pressure thing too.

I do not know about the U.K. however, in Spain, the traditional retired folk, and non working people, purchase fresh fish, meat and poultry and offal and prepare their Menu del Dias, their lunches with fresh produce (vegetables) and still buy beans by the barrel kilo weight & soak the beans overnight for their casera bean (casera =homemade by scratch) dishes a staple in Spain, especially in the entire northern autonomous regions. Examples: Fabada de Asturias, Cocido Madrileño etcetra …

Many people over 55, order offal meats – as it is not as expensive as other meat products. There are lines in the Central Markets for these offal products. Also they grew up on Offal and enjoy these type of meats.

They have little interest in cooking. Their main interest is going to a tapas bar or pub later in the evening. Parents work and the kids throw in the micro-wave, frozen things like burritos and prepared pastas etcetra. Little is healthy …

What is ready made Russian salad? Not something we see in rural Oregon.

@Harters @RobinJoy Thanks for the explaination.

According to you, what are the British classics that are working well today? Do you feel the modern dishes will turn into classic?

In France, you can find the classic dishes in traditional bistro or brasseries, the young and creative chefs, those participating Top Chefs show, they are busy trying very hard to deconstruct the classic into something new. Some dishes might become a signature dish of a certain chef, but not sure if those will become classic like in the past or maybe only time can determine what will be classic of tomorrow. Another group of chefs are more or less cooking traditional dishes but modernize them by using less oil, butter, cream etc or more elegant plating or modernized the cooking technique etc.

If I wanted to buy tripe now, I’d need to go to one of the traditional market halls in one of the towns in the area - and even then I wouldnt be assured of finding someone selling it.

The other day, I tried to clean up the fat and nerves in kidney, took me a lot of time, because I have never did that. Most of the time, they are already cleaned when bought.

A salad created by a French Chef who worked at The Kremlin, Moscow in 1846.

The original name of the Salad is The Olivier Salad … Le Salade de Olivier.

The ingredients: The original was prepared with prawns. However, tuna fish jarred or tinned (canned) is used here, potatoes, hard boiled eggs, carrot, salt, black pepper, celery, mayonnaise homemade or
purchased, onion if you wish, sweet peas if you wish …

You can google up The Olivier Salad for the Original French Recipe if you wish.

It is sort of a potato tunafish eggsalad.

Don’t know why, Beef Wellington is very hot these days in France, you can find on every food magazine cover or on restaurants menus. On the whole, savoury pies are getting back in trend here. 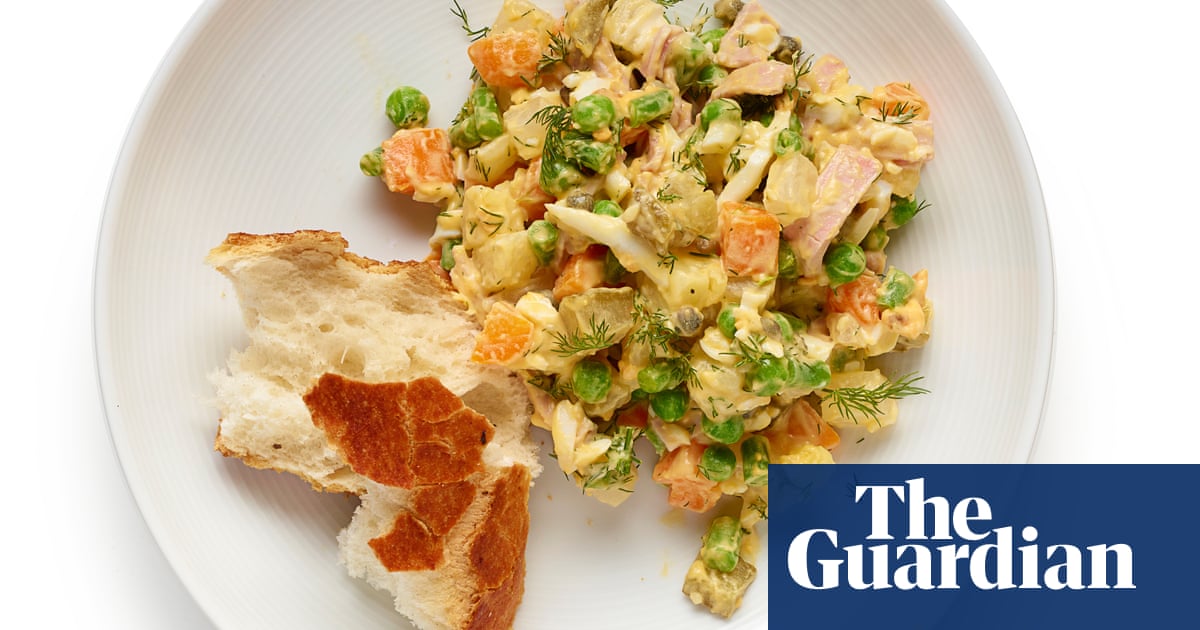 How to make the perfect Russian salad | Felicity Cloake's The perfect…

Spuds, boiled eggs, runner beans, mayo – and always, always ham ... or not. How to decide with so many recipes to choose from? As always, our resident perfectionist has a go ...

Not uncommon in the UK but is much more of a Spanish dish. So much so that the Spanish family members just refer to it as “ensaladilla”

I assume the “ready made” simply means that you can buy it in the supermarket,as you could with other prepared saalads, like coleslaw, etc.

Yes, you could buy it in any supermarket or deli in Spain … And also have it as a tapa in almost every bar. It is served with bread … And or prepared on canapés.

According to you, what are the British classics that are working well today? Do you feel the modern dishes will turn into classic?

I can do no better than give this link to the menu of one of my favourite local bistros. It’s a good example of Modern British food. Look to the dessert section where you will see classic traditional desserts - sticky toffee pudding, apple crumble and treacle tart

But who knows whether modern dishes will turn into classics. Ask me again in 50 years and we’ll see what’s stood the test of time.

Very common as a readymade in Greece, too.

In Canada and the States, readymade mayo-dressed potato salad, potato-egg salad and macaroni salad are common, but they don’t have as many additions as Russian Salad/ Olivier.

Never had it in Greece …

My parents prepare it from time to time during the summer as a starter or on canapés. It is labourious on the prepping !! Lots of dicing and slicing …

I am a big fan of the Spanish style Russian Salad. I have it at our local bars from time to time.

That menu looks to be everything I love about modern British food: interpretations of British classics, local/regional sourcing when possible, and preparations that speak to the way people like to eat now (risotto, I’m looking at you). Updated, while respecting what makes a locale special.

Appears that you are lucky to have deliciousness near your doorstep, if that menu is anywhere near as promising as it appears.

if that menu is anywhere near as promising as it appears.

It will be. We’ve been going for years. I’m always spoiled for choice on the menu (which changes seasonally). Never had a bad dish, let alone a bad meal.

Superb menu…but you had me at “Black pudding bonbons, mustard mayonnaise 3.5”

The UK’s best black puddings come from the town of Bury which is on the other side of my metro area, so they’ve often appeared on menus in one form or another. Slices underneath scallops were a thing for a while. And now its bonbons - black pud with a crispy coating. Just lovely. Mustard is a traditional accompaniment. There’s a guy at a local farmers market only sells Scotch eggs - including a balck pudding one, where the pudding replaces the usual sausage meat.

There’s a stall on Bury market which sells THE best black puddings. They come in either lean or fat versions. Only wimps want lean. They’re usually sold cold to be taken away for heating at home but they do sell them warm to eat there and then . Mustard and ketchup on offer to go with them - only wimps want ketchup.

It also appears twice on the menu of this city centre bistro that we’re going to next week. Firstly, with a pigeon breast starter and then in a croquette with bacon, alongside a pork chop. https://www.tnq.co.uk/menus#alacartemenu