By the way, I just got my chenpi pu erh tea (柑普茶) today. Bought them directly from the producers in China, so they are less expensive than if I buy them in the US or even in Hong Kong. The light blue one on the top is about $11, but some can certainly go up to $20 a piece if not more. I doubt the bubble tea are using expensive tea, but hey if they do, then maybe that is why they are $24 a cup 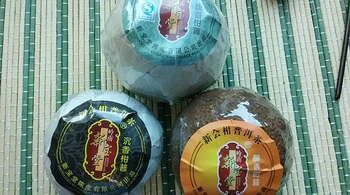 [spun off from another discussion]

I bought them from a pretty famous store 新宝堂 which specializes Xinhui Chenpi (新會陳皮). The Chenpi there is extremely famous, so I definitely prefer to get my Chenpi Pu Erh tea with the Chenpi from Xinhui.
“Xinhui food exports include rice and fruits, especially oranges. Dried orange peel produced in Xinhui is also used in traditional Chinese cooking. Dried orange peel produced in Xinhui is world-renowned. …” 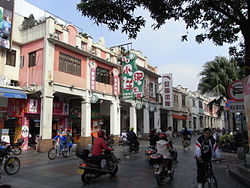 I just opened one ball up. It is better than the previous one I was drinking, so definitely worth the trouble for me. 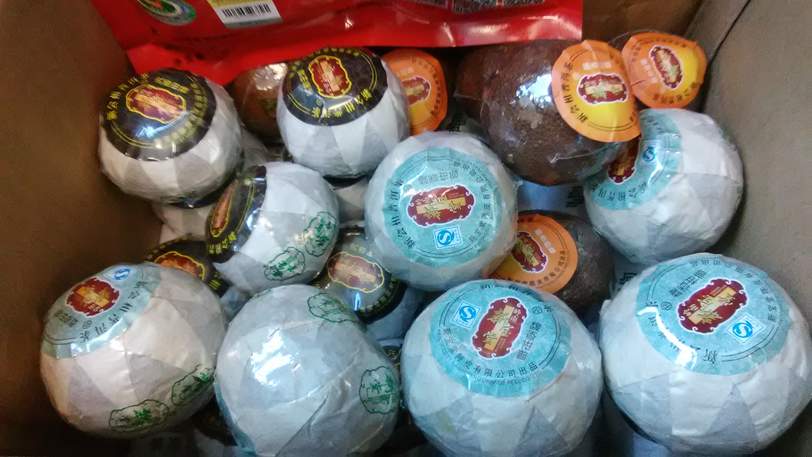 Huh, I wonder if that tea is similar to the one I saw on the menu at Yan Toh Heen (I uh… didn’t quite try it since I was put off by the price…)

You are spot on. Yes, I like tea made from fully grown red Mandarian orange 大紅柑 the best, but these days the young green Mandarian orange tea 小青柑 is very popular. In this shipment, I got two versions of fully ripen red Mandarian orange chenpi pu erh tea (大紅柑普茶) and one half-half chenpi pu erh tea (green turning red)
I believe one get better tea at home. This is not just because of the higher price points in a restaurant, but also because I don’t think most restaurants correctly brew the tea. To get the best flavor from tea, you should brew in small containers like a Yixing teapot or a Gaiwan (紫砂壺 or 蓋碗). Brew it quick and in small volume.
I mean. In my opinion, if we go out to get the fine tea, why get sloppy about the preparation. It is almost like getting a good quality USDA Prime steak and throw into a microwave.

A inferior steak prepared skillfully is still far better than a superior steak cooked improperly. Ingredients matter, but techniques are very important too.

Thank you. We were not aware of Yan Toh Heen’s tea specialty. That said, when it comes to tea and dim sum, some we know favor Lapsang Souchong when they are not ordering a midday Chinese beer or snoot of Scotch for “yum cha”.

Brew it quick and in small volume.

True! The Hong Kong teashop showed me that! I tried to reproduce the same way like the girl made it at the shop. Never as good. I believe you need the right water (here, the water contains too much calcium). And I don’t have Yixing teapot.

I like a lot Long Jing (Ming Qian Shi Feng), I would like to find that for less than 100 HKD…

When good quality tea leaves are infused with excellent water

Well said!
What type of water do you use to brew your chenpi pu erh?

Water is very important, but sometime people can also overthink as well. I know some people will argue that one should use the same water from the same region where the tea leaves are grown. I think that is just unnecessary.

In my opinion, any water that tastes good to you is sufficient to brew tea. If a water has a funny taste to it, then brew the tea in it will still have a funny taste. I currently use filtered water. It tastes fine to me.

By the way, in a month or two, the first pick of Long Jing (Ming Qian Shi Feng) is coming up. You better not miss it.

When we were in Paris in November we drank some Volvic mineral water. I thought it was terrible for drinking. Had no taste. Then we had to get a new espresso machine, and the guy who sold it to us told us to use Volvic mineral water in the machine! Maybe it’s good for tea, too?

The guy who sold me orchids told me Volvic was great for watering the plants too.

I did some research, it has a PH around 7, rather neutral and low minerals. Yes, I think you are right about it being a good tea water. There can be other better water, but Volvic is still something affordable and it is easy to find. I am lazy and forgetful, I only use carbon filtered tap water.

By the way, in a month or two, the first pick of Long Jing (Ming Qian Shi Feng) is coming up. You better not miss it.

I don’t know, maybe I will get a small batch, I am far from finishing last year’s stock. I divided them into smaller portion and keep them sous vide, I hope they will be still okay this year.

When we bought the new espresso machine (because the electronics in the older one died), I asked the guy, what he thought of the filter cartridges that “clean” the water before it goes into the machine. He said, Don’t use those! Use Volvic. Our tap water is extremely calciferous, so we need something to remove minerals so that the espresso machine does not get stopped up with calcium. So far it has worked great.

Our tap water is extremely calciferous, so we need something to remove minerals so that the espresso machine does not get stopped up with calcium.

Here too. In southern France, water are less calciferous. In Asia, there is not much calcium in water. I know because I feel the calcium after hair washing, here is hard, in Asia, hair is much softer!

You are keeping your tea in a sour vide – like cooking them?
As for the first pick, I will get some. I just have to plan how much for the first pick Sencha (一番茶煎茶) and first pick Long Jing. I don’t have money to buy eveything. Ironically, I think I like Sencha (煎茶) slightly more than Gyokuro (玉露). The first-pick supply is once a year. I am keeping most of focus on my Pu erh tea. I have three Pu erh tea cakes at work, and four more at home. 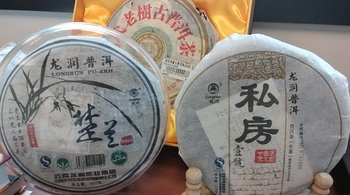 You are keeping your tea in a sour vide – like cooking them?

Why not?! Maybe low temperature long time brewing works too!

Haha, excellent Pu erh can be a good investment, you can sell them later to buy a house!

Pu erh can be a good investment

Well, at least they don’t go bad over time like Long Jing or Gyokuro.

I like Wuyi golden key, sometimes some good Iron Budda. I have got some Sencha at home, they aren’t premium quality, just average stuff, didn’t get hooked with that yet.

Well, at least they don’t go bad over time like Long Jing

Even if they lost the taste, they are still very good to cure certain infection.