Chili House, the Inner Richmond sister restaurant to Z & Y, is mainly known for their Sichuan food. They’ve been promoting that they make 20 Beijing ducks a day and that they have a chef making Beijing Dim Sum. They told me on twitter that they’re preparing a menu for the latter and some pics of xiao long bao, Beijing style shao mai, donkey rolls and other stuff I’ve seen at Beijing Duck House in Cupertino.

What’s the word on the street about the food?

Ooh, looking forward to info on this. We’re going to be in the area over Thanksgiving and after Christmas.

I think you’ll need to pre-order your holiday duck

They say they make them using traditional methods, but don’t specify which ones.

Jonathan Kauffman wrote an article about their chef. The chef has had a very interesting life! Kauffman also describes a 16 course ($400 for 10 people) dinner there. Has anyone else eaten at Chili House since the new chef arrived?

I still can’t find an online menu of their Beijing Dim Sum, but they’ve got some new photos on their website.

I doubt I’ll be able to organize it for a while, but if you’re interested in attending either their Beijing Dim Sum or a dinner like J. Kauffman had, send me a private message.

If the 16 imperial court courses taste as good as they look, then $40 per person in San Francisco is a steal. The question is how they manage to do it so cheaply.

I can’t imagine, however, that the skewers were part of the original court cuisine?

My dinner was Sichuan food, but I snapped photos of the Beijing menu 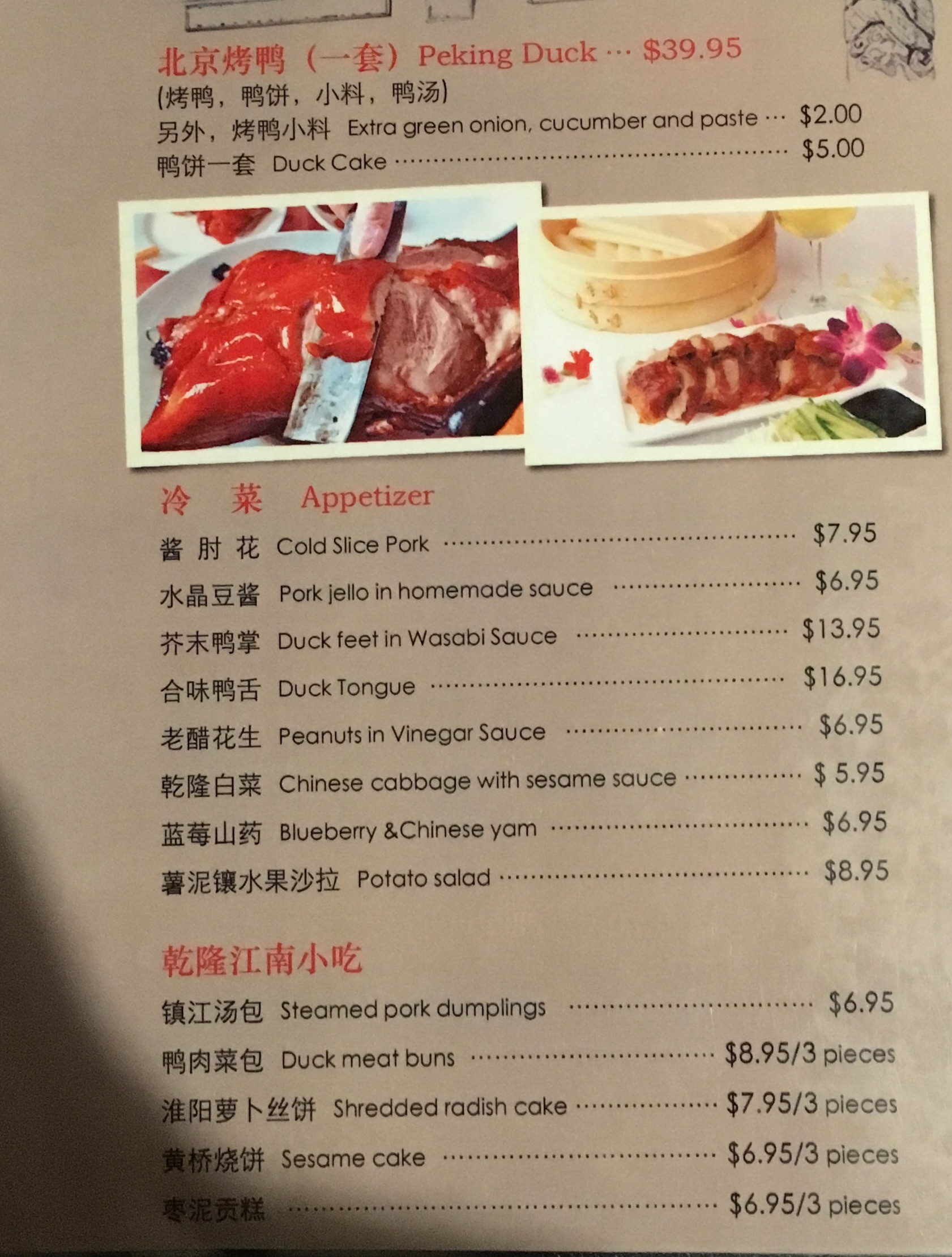 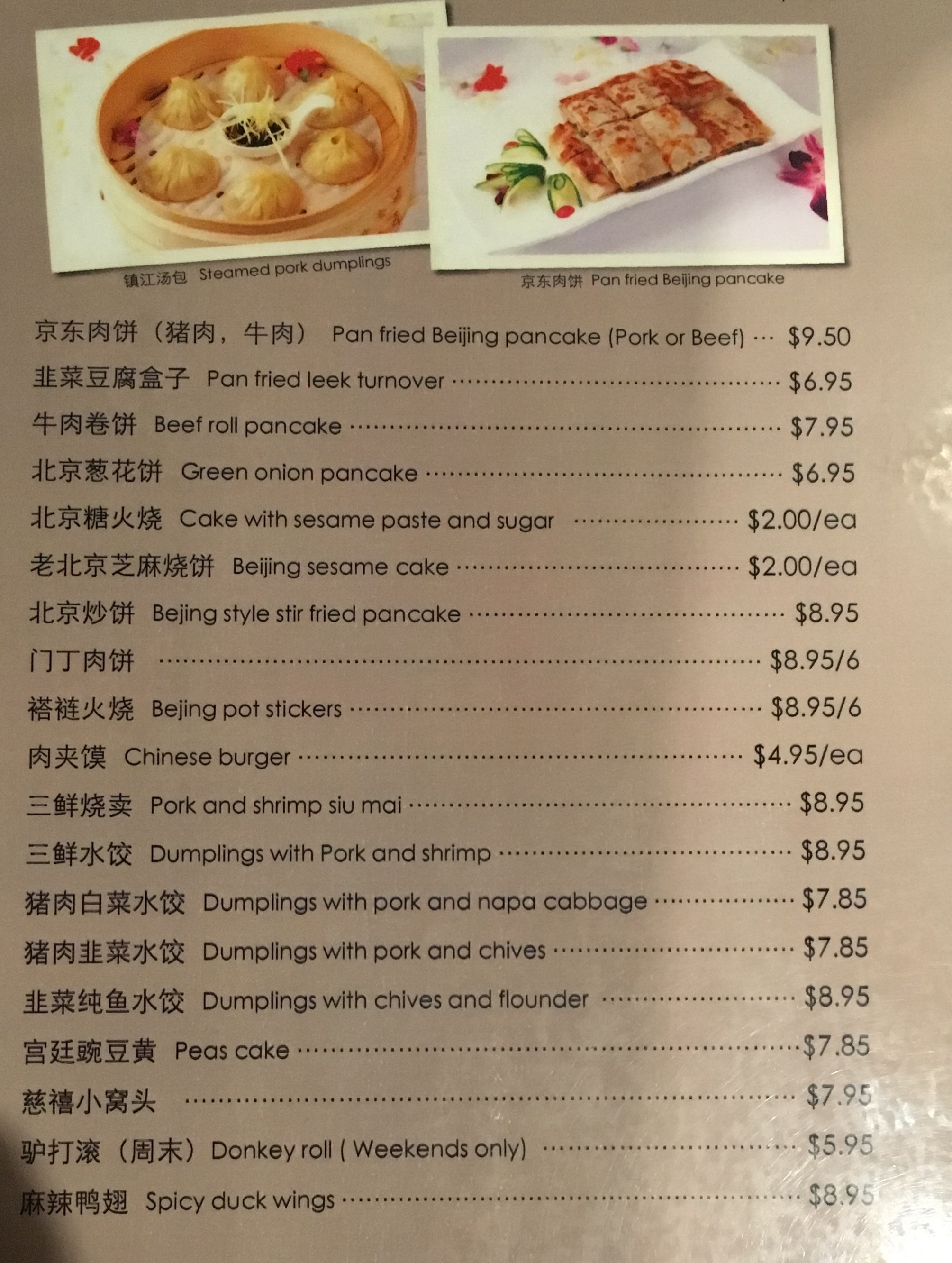 I had a dinner in a large group here recently. We were just under 8 people so didn’t have a chance to get the Beijing banquet menu and just ordered off the regular menu. We also reserved a Peking duck in advance, which they recommend to do. It was ready to go and served right after the time for our reservation.

The Peking duck was served with pancakes, scallions, cucumber, and hoisin sauce. I thought it was ok. The skin could have been a little more crispy. They left a lot of the meat on the skin when carving. The last Peking duck I’ve had recently was at Great China in Berkeley, and that had a crispier skin. The pancakes were fine but a little on the gummy side. After the duck is carved they offer you the choice of frying the remainder of the carcass salt and pepper style or making it into a soup. We chose the soup, which was a little bland tasting to me. I think we should have went for the salt and pepper prep. I don’t remember ever getting a good duck soup from Peking duck bones. 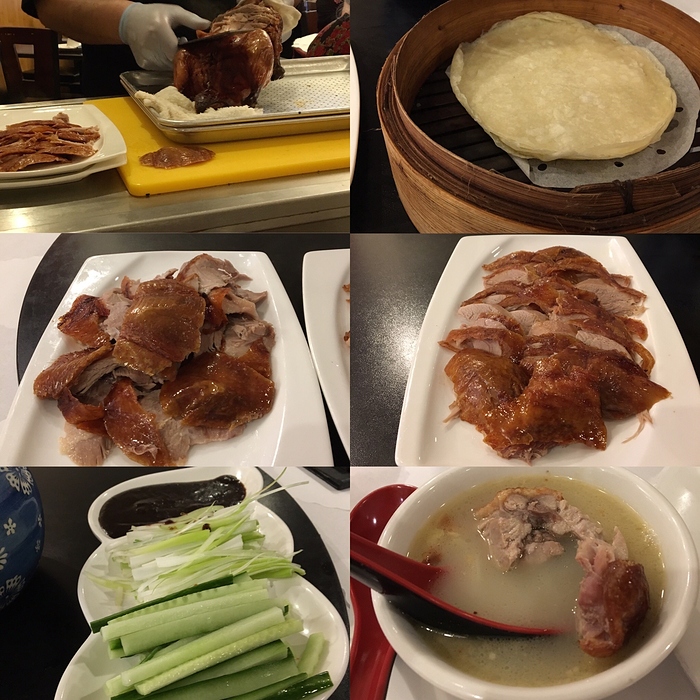 In addition we had:

Very good, bit of numbing and chili heat. The medium thickness noodles could have maybe been a little firmer. 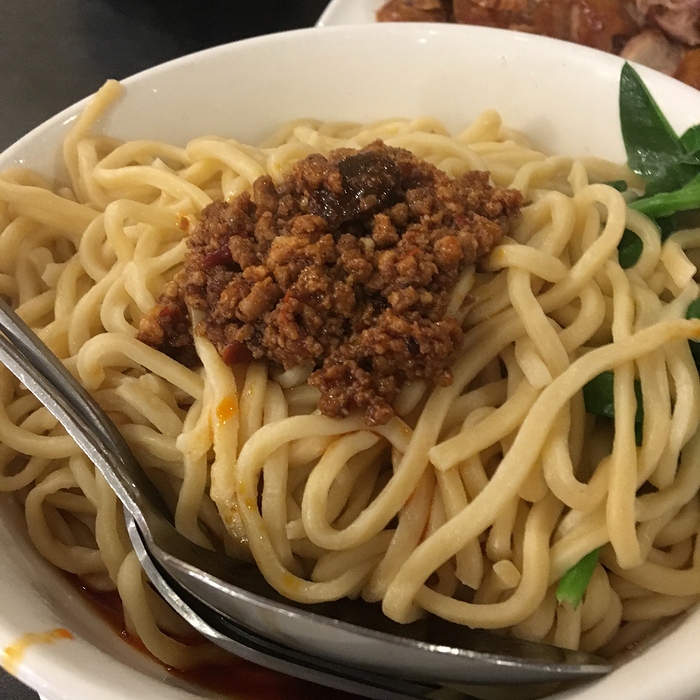 Great, like the version from Z&Y, crispy exterior, spicy chicken with a bit of numbing mala. Covered with a lot of dried chilis. 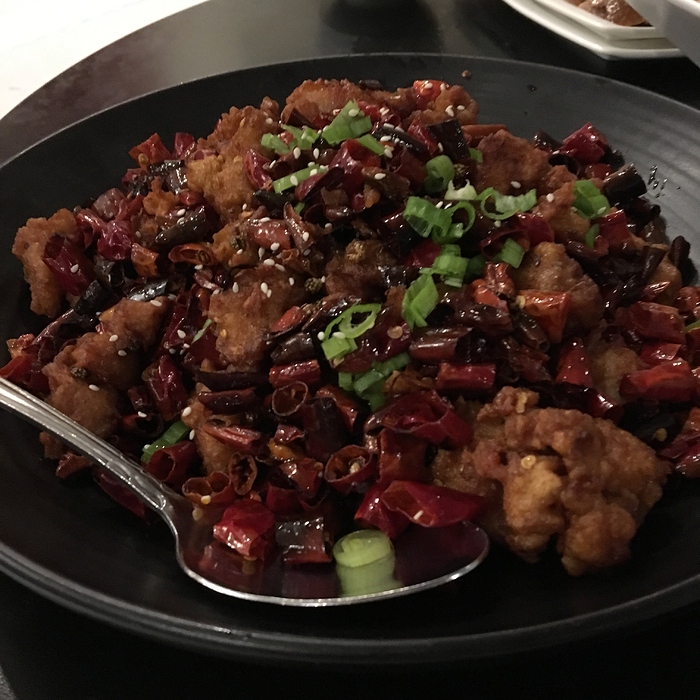 House Special Fish Fillet Boiled in House Spicy Sauce
They said this was made with catfish. Very good, numbing and spicy. 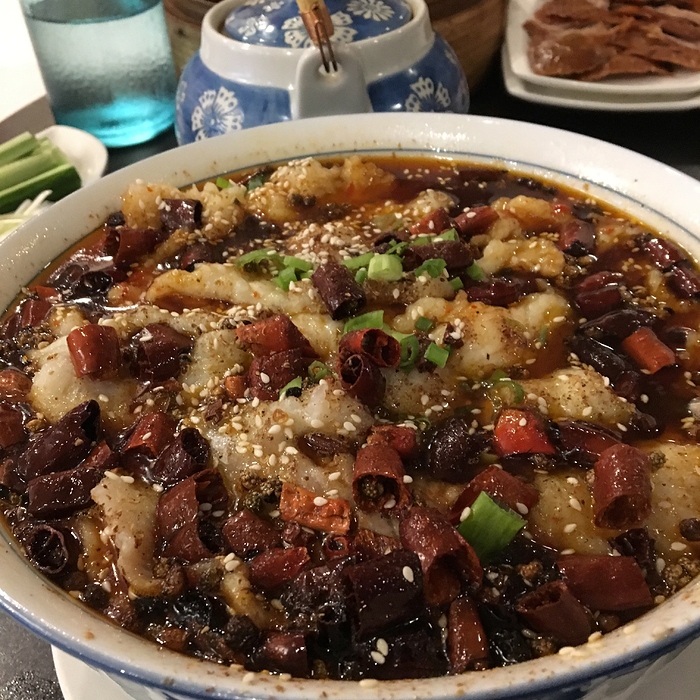 Pot Stickers
Pan Fried Pork Buns (not the actual name, I forgot what it was called on the menu)

Pot stickers were good but the buns were great. The bun had a meaty filling with a lot of juice, which kind of exploded when I bit into it. Kind of like a shengjian bao but with a thicker, more breadlike exterior. 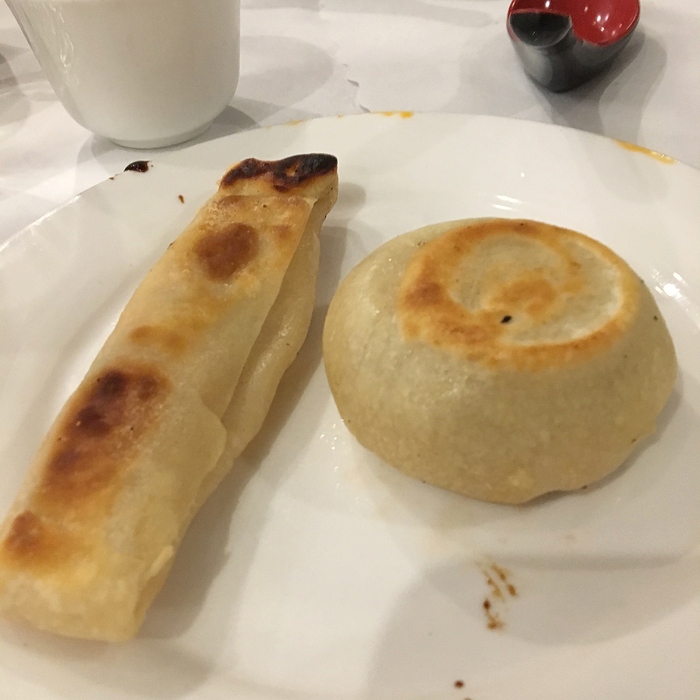 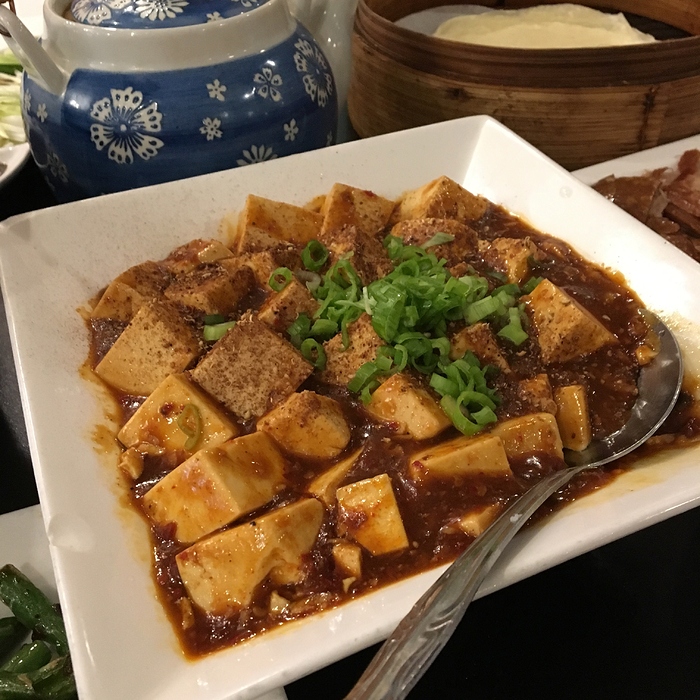 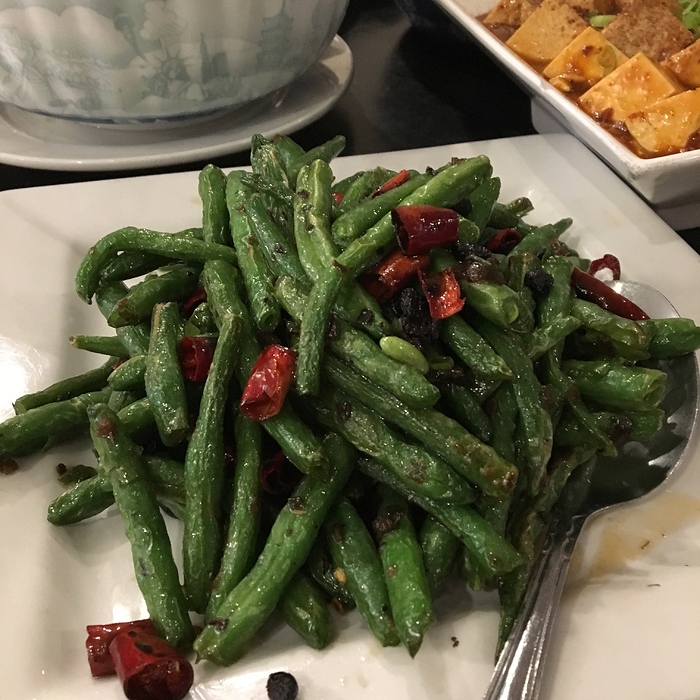 Goubuli / Ignored by the Dog Buns
Ok, but filling could have been juicier and bigger. 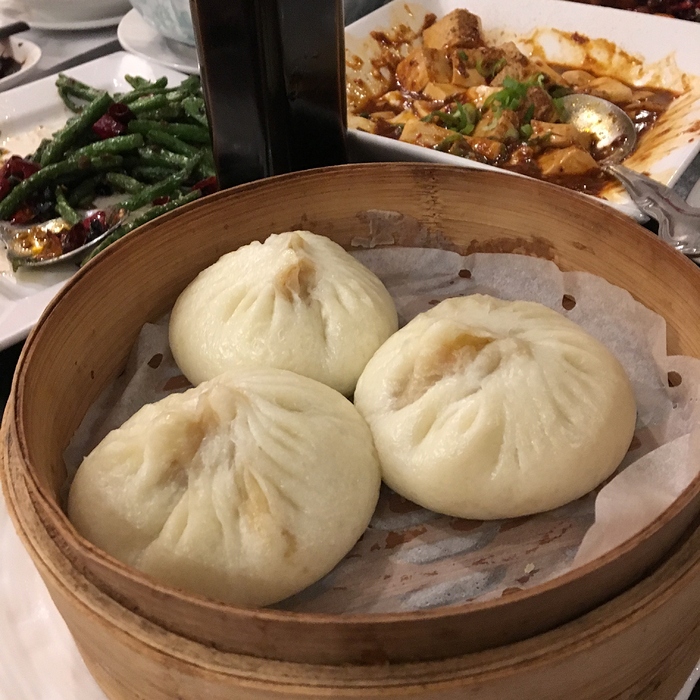 Braised Pork Leg (?)
Don’t remember what this was on the menu. I think it was a pork leg. Impressive looking, carved tableside. Served with the steamed buns you sometimes get with Peking duck. Very good, fatty rich and gelatinous with the skin still on. 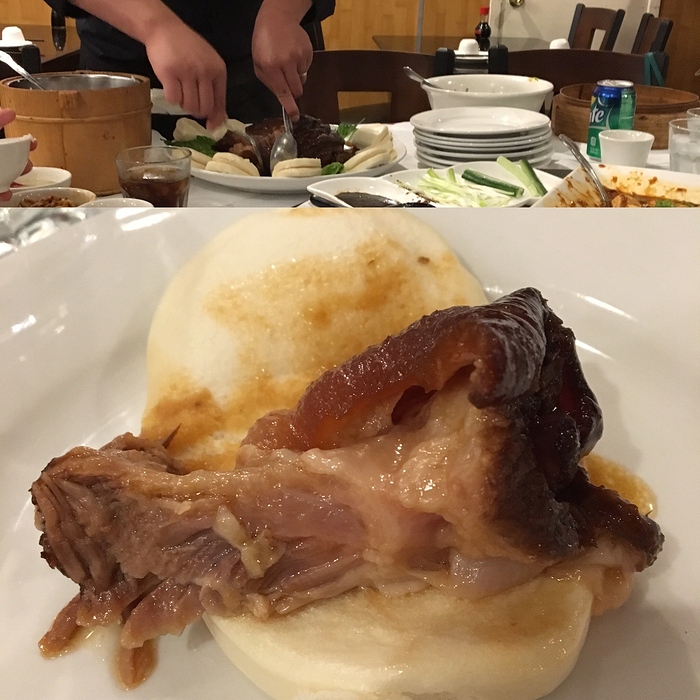 Highlights for me were the Pan Fried Pork Buns, Chicken with Explosive Chili Pepper, House Special Fish Fillet Boiled in House Spicy Sauce, and the Braised Pork Leg. Price was around $240 including tax but before tip, for 7 with a good amount of leftovers.

The braised pork leg looks delicious. Is the dish for a portion of a pork leg?

The banquet is alright. Picks from all areas of the menu (and one can probably argue it lacks a bit of coherent progression.). So instead of letting them pick what they want for you, I think a la carte is the way to go.

The braised pork leg looks delicious. Is the dish for a portion of a pork leg?

I think so, though I didn’t do the ordering for that dish. It was pretty big.

It looks like a pork shoulder (ti bang in Mandarin). Nobody does that piece of meat better than the Shanghainese, IMHO.