[Chicago] Fat Rice, anybody ate there before?

Recently I saw an eye-catching comic like cook book called Fat Rice, Portuguese meeting Macau cuisine. Anybody ate there before, what do you think of the restaurant? Or it’s just another of those hype places?

One of their recipe I will sure want to try: 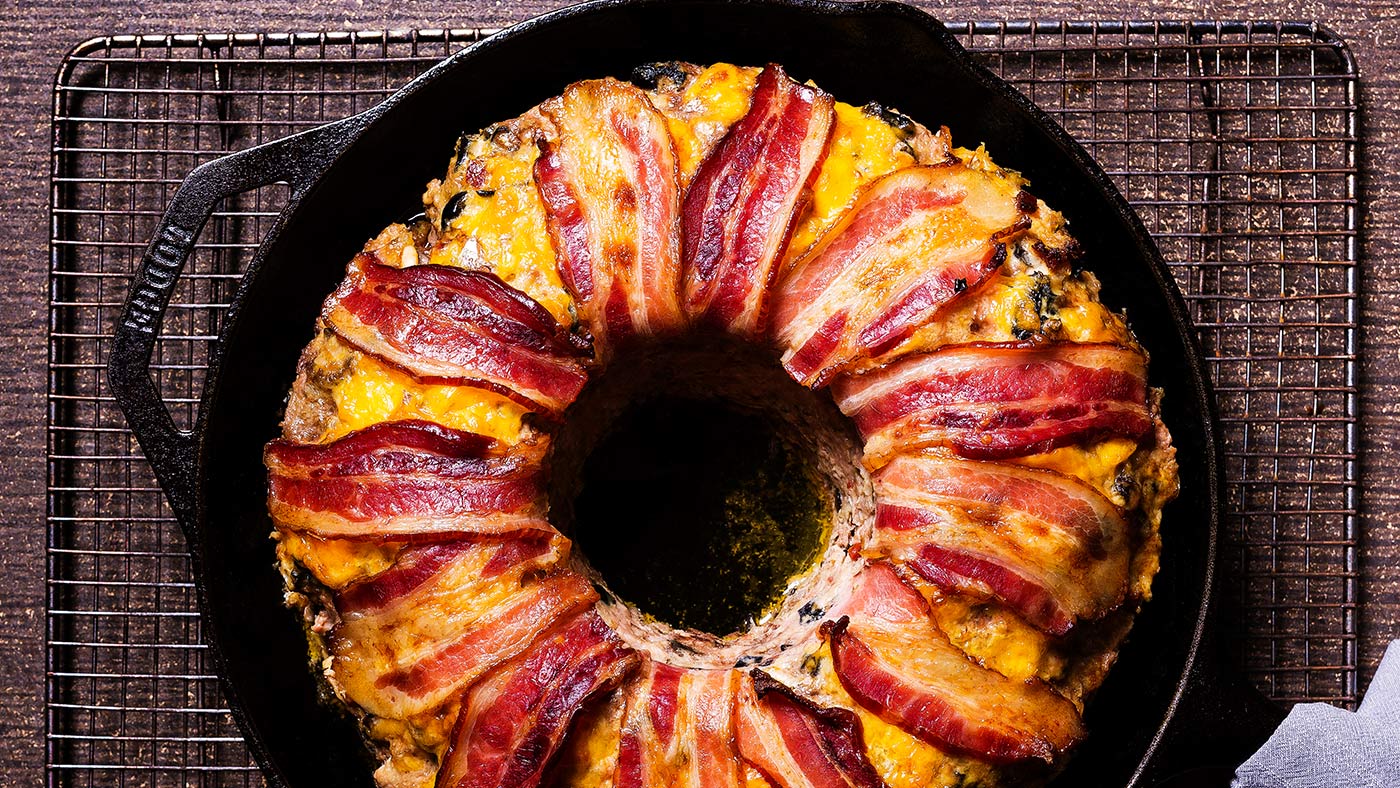 This Macanese Meat Loaf Is the Ultimate Hearty Indulgence

This circular meat loaf takes on the flavors of Macau in this recipe from Fat Rice. The milk-soaked bread and grated cheese add plenty of moisture.

Yes, one of the the owners/chefs is a good friend of my brother’s. We had dinner there last year for my husband’s birthday and the food was terrific. Their menu changes regularly and I don’t see most of what we had on there now, except for the spectacular potstickers with dill and the signature Arroz Gordo, which was also excellent. I remember a fabulous fiery shrimp curry special, and a tofu/vegetable dish that was surprisingly great. I haven’t seen the book so I have no idea if it’s worth buying, but if you’re in Chicago I would definitely recommend visiting the restaurant!

I downloaded a version of ebook sample to have a feel of the cooking. I thought it was about Macanese cuisine, meaning Portuguese + Chinese but I’m pleasantly surprised that there are some other southern Asian influence namely Malaysian influence in the cooking. Ingredient wises, I saw Filipino and Spanish influences as well. I think it’s a quite fun cooking. I will get the paper version of the book, ebooks cookbooks are depressing, and I like the cover. 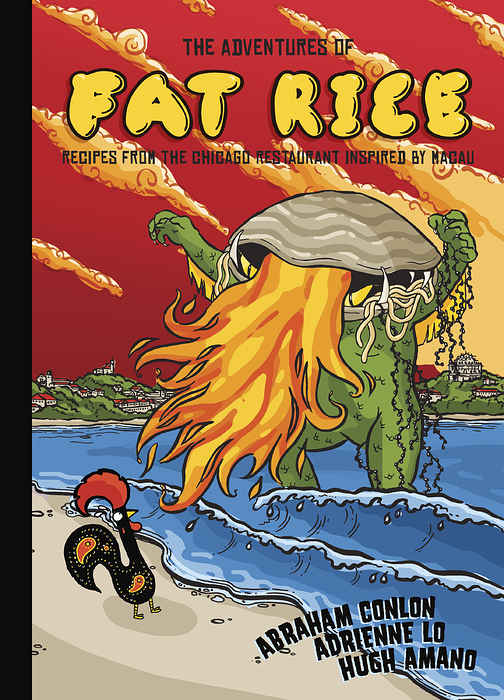 That monster clam with noodle stuck amongst its teeth is hilarious. And the rooster was like, ‘what’s the matter with you.’

Went here for dinner during a trip to Chicago. Walked in and got a seat at the bar on a late Saturday night after a short wait. They have an efficient waiting system - you can wait in their bakery a few doors down and order a drink or some snacks there until they text or call you. I’ve been to Macau a few times and have had Macanese food before but don’t remember much of it unfortunately. Wanted to get their namesake dish, the arroz gordo, but I think it only comes in a large size for two, so ordered some smaller dishes instead.

Bacalhau da Vovó
Not bad - cold salted cod spread with olive oil. I used it as a spread on the roll, which was not the best bread but served well enough as a platform for the fish. 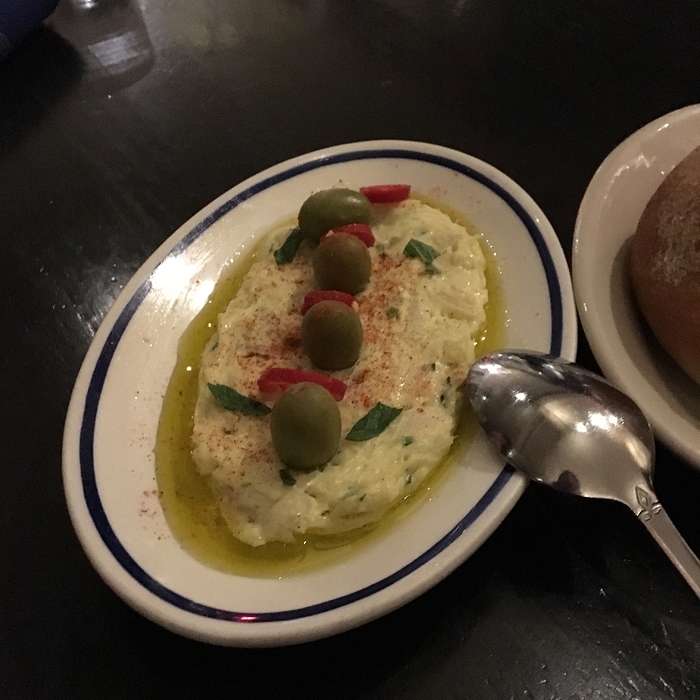 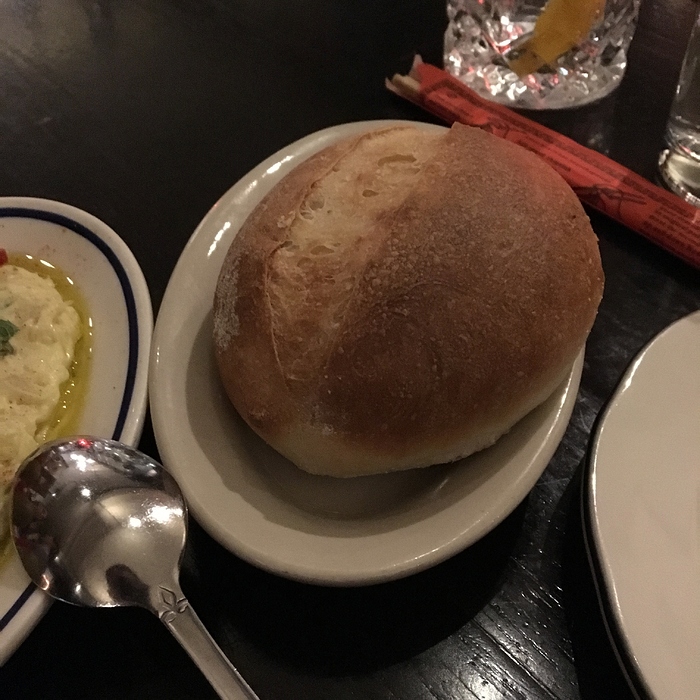 Scallop Fried Rice
Very good, I liked this a lot. Not traditional fried rice. Topped with crispy sweet potato fries which added a nice textural contrast, as did the aioli drizzled on top. I’m a fan of aioli on fried rice. Kind of made it taste a little like a paella. Vinegary nori. Nice bits of sweet scallops, egg, and I think sausage mixed in. 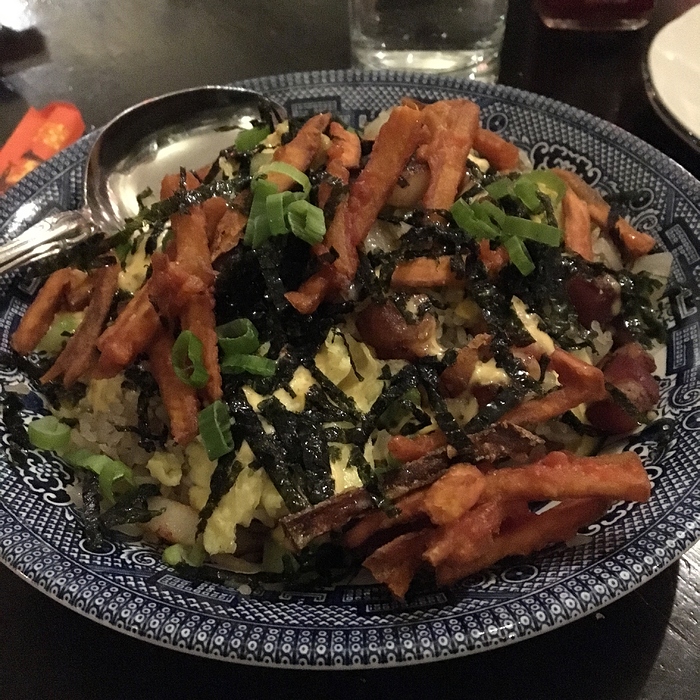 Definitely worth checking out. Wanted to also try the Portuguese style egg tarts but they didn’t have any left.

Nice bits of sweet scallops, egg, and I think sausage mixed in.

Do you think it’s the Chinese sausage - “lap chong”?

Nice bits of sweet scallops, egg, and I think sausage mixed in.

Do you think it’s the Chinese sausage - “lap chong”?

Just to chime in my two cents here on my visit in June. I have heard a lot about this place, most notably on LTHForum. I have been to Macau before, and enjoyed Macanese food though it was more on things like African Chicken, their Portuguese baked chicken, and that salted fish cod ball. I was a little hungry and entered the restaurant just when it opened. 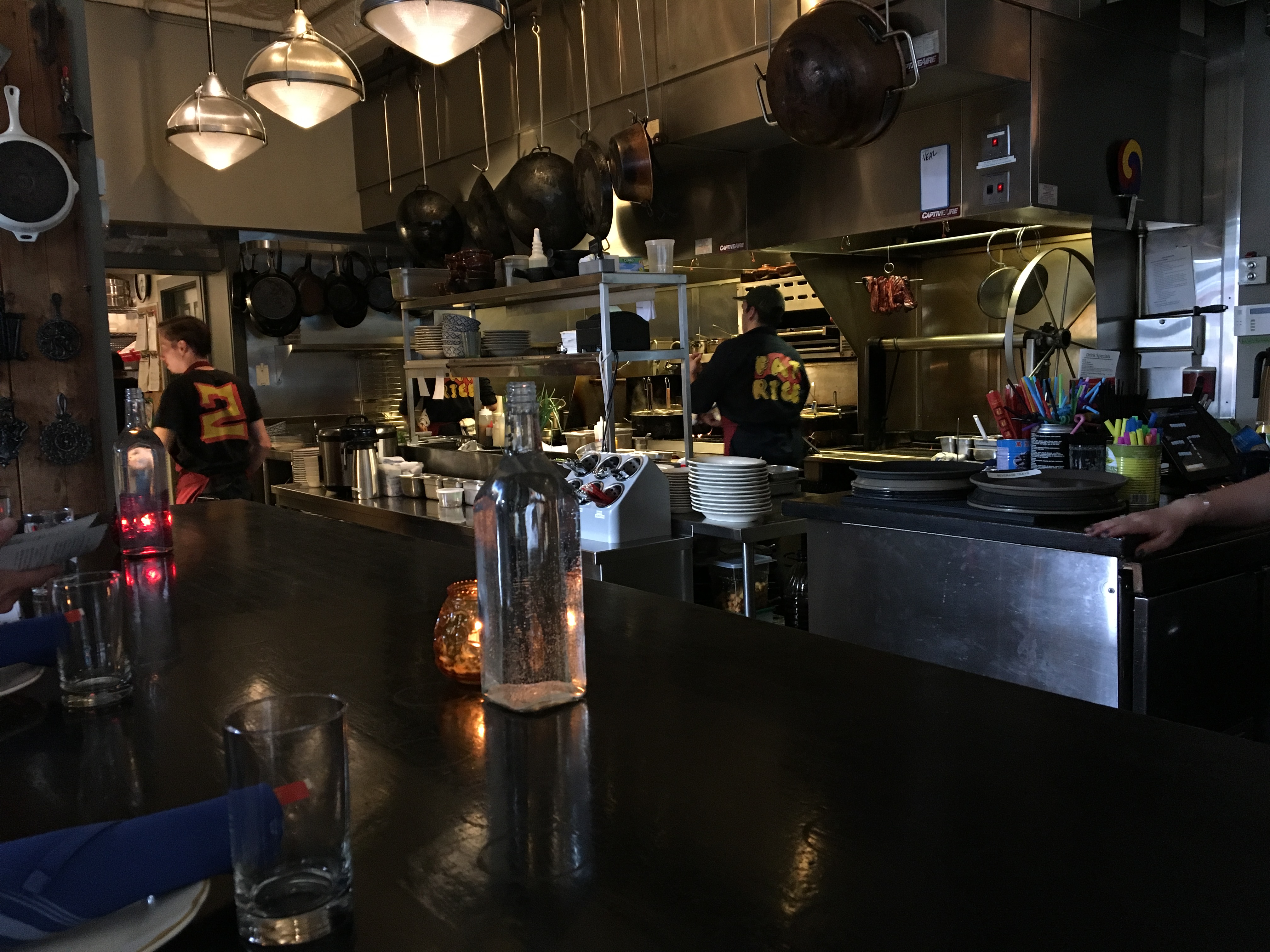 Pretty nice setup, though it can get loud as more and more people enter.

As I was a little hungry and thinking that I probably won’t be visiting Chicago anytime soon after this trip, I decided to go all out and get their namesake–Arroz Gordo (aka Fat Rice). 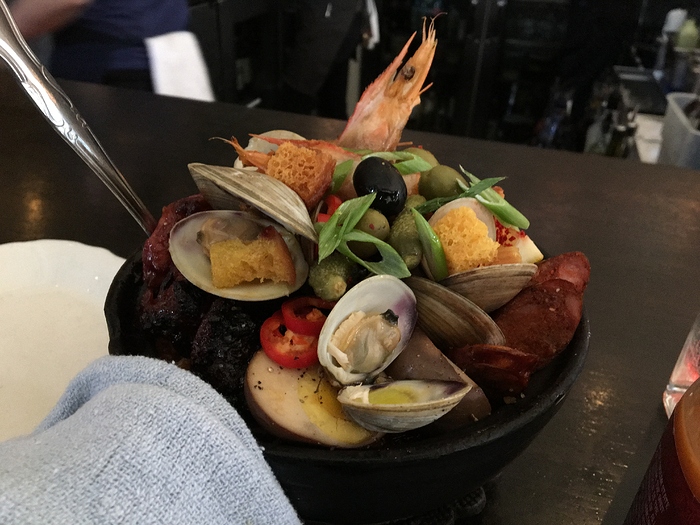 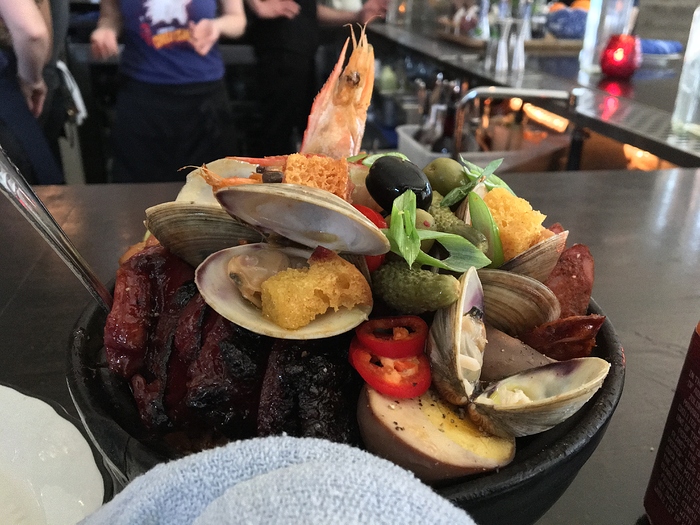 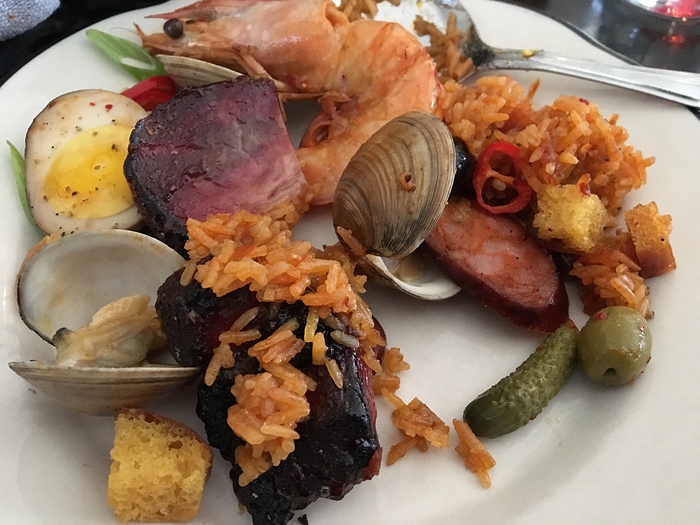 From what I could see into the kitchen, they cooked a few ingredients separately and then placed together in a nice looking medley. The chorizo had a pretty smokey flavor and went well with the rice which was a little sweet. The curry chicken thighs were pretty juicy and made me reminiscent of the baked Portuguese chicken dishes. The croutons were nice and toasty, and gave a solid crunch. However, for me, this is where things begin to slide. The prawns and clams were somewhat cool by the time the dish got put together. The tea egg’s yolk was more towards the overcooked side and was somewhat grainy and dry. The char siu was okay, but the marinade wasn’t the same savory sweet taste I expect like the ones in HK, additionally the fat distribution resulted in a few extremely fatty pieces and really lean pieces. The rice was well done, but it is not probable for a single person to go through this entire dish … oops.

Overall, it was an interesting medley, I just did not think it hit all the marks and the dish was rather pricey ($48 when I was there). They had a mushroom soy sauce and their diablo hot sauce which made the items more interesting, but I honestly don’t think they were needed.

Though I could not fully continue and stuff myself with the fat rice, I recall that they had Portuguese tarts and wanted to compare to Lord Stowe’s. 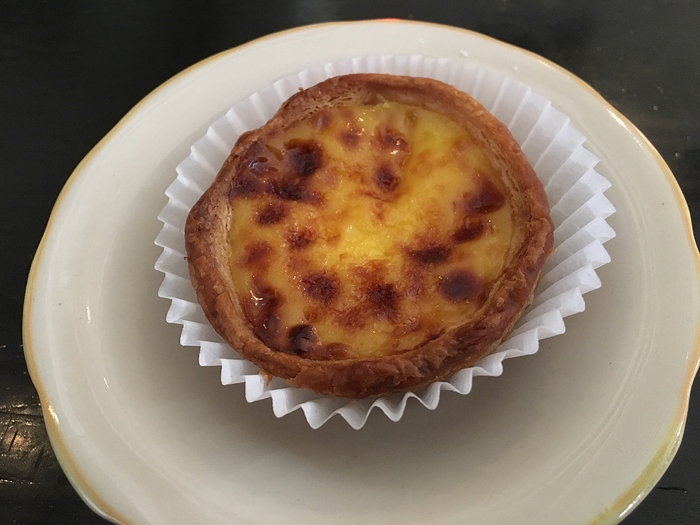 Though it wasn’t fresh out of the oven at this point (bakery’s closed I think), there was a distinct caramel aroma from the tart. Unfortunately, the custard itself was not up to par–I found it rather lumpy. The crust wasn’t too bad but did not really give off a flakey feel. The real blow for this pastry though is that the price wouldn’t just given Golden Gate Bakery in SF a run for its money, it would outright steal their wallet. The tart was five dollars for one pastry. Oof.

In the end, I didn’t quite enjoy Fat Rice for its food nor its value. Would I go back? Possibly if someone knows their menu’s hidden gems but I think I’ll take a look at Chicago’s other fine offerings next time I’m around.

Edit: And uh… shouldn’t this topic be under US-Midwest?

Thanks, this thread is in Midwest now!

Sorry to know your meal wasn’t that satisfactory. Looks like some interesting concept with some bad execution.

A note on the tea egg, the ones I ate in HK was cooked like in your photo, completely cooked, no running yolk.

A note on the tea egg, the ones I ate in HK was cooked like in your photo, completely cooked, no running yolk.

Haha, and that’s why I really don’t care for those tea eggs either. Not a knock on the one made by Fat Rice. It was definitely a tea egg, I just don’t care for a dry interior. Wish it more like those onsen eggs.