Anyone else watching? DH and I have enjoyed every episode of this documentary series. If you have not seen it, each episode focuses on one Chef. But, the story telling goes way beyond food and touches on how each Chef came to find their passion and examines various the events of their lives/world and the impact on their food/restaurant/cooking. The story telling is so well done and the cinematography is breathtaking.

One of my favorite episodes was Alex Atala, D. O. M. in São Paulo, Brazil. His passion about his life, world, and country was seductive.

Here is a list of episodes available so far.

Yes , I have seen all of them . My favorite is Francis Mallmann with his private island in Patagonia . Myself a avid fly fisherman and love cooking with fire and those magnums of wine . That would be my dream .

Thanks for posting this. Saw all of Season 01. The Niki Nakayama episode really made an impression on me. Didn’t realize Season 02 was out, so I have some catching up to do. 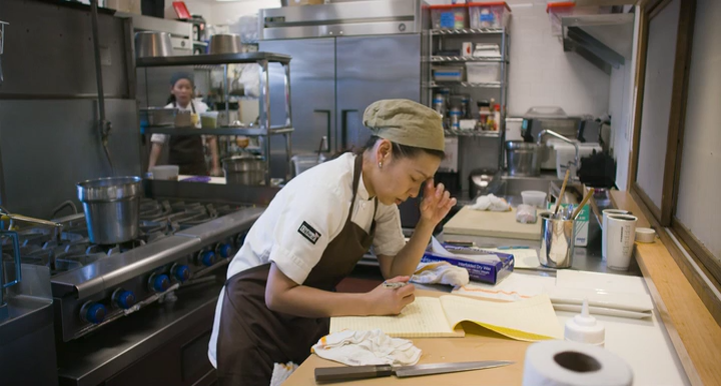 Oh, I didn’t realize that Season 2 is out. Thanks for posting. I can’t wait!

Thank you for suggesting this! I am a new subscriber to Netflix after my sister insisted that I needed it. Looking forward to watching.

Great name, Robin! I think this show was worth the price of a subscription. Enjoy.

In fact, based on all these comments, I have decided that I need to watch Season 1 again.

Season 3…France is available. As beautiful as the other two seasons.

The first episode is Jeong Kwan, a Buddhist nun who, first and foremost, feeds those at her temple. I recall seeing an episode of Avec Eric, where Eric Ripert went to the temple and spent time with Kwan. I’m not often moved to tears by “food” shows, but found this to be one of the most beautiful stories about so much more than food.

Thanks for bringing that up. I am trying out Netflix on the trial month on my new TV now, I saw the title of this series, but didn’t check it out yet. Browsing your list of S1 and 2, looks interesting.

Here in France, they have Chef’s Table with 3 seasons (total 3 seasons, 18 episodes), and another separate Chef’s Table France with 6 episodes. Strange that they didn’t have the French chefs integrate in the original CT series.

I finished watching the 3 seasons, I like especially Francis Mallmann’s philosophy in life, his cooking with fire (so much so that I bought his book!)

What food publications are you reading now? Cooking, Cookbooks, Ingredients

Just received Seven Fires: grilling the Argentine way by Francis Mallmann today by mail. Rarely get excited anymore with new cook books, but grilling with open fire… I really want to learn more. I have been hesitating to get Mallmann’s 7 fires or the new book. I choose the old one because it concentrated on South American food. Just if you are interested, the seven ways are Parrilla, Chapa, Infiernillo, Horno de Barro, Rescoldo, Asador, Caldero. [image]


The fact that he reached the climax of his career and letting things go to the simple back to the basic. My other favourite in Season 1 is Magnus Nilsson’s cooking merging with the wild difficult nature in Sweden. I like his “root cellar” I think I will be starting a shelf with marinating conserves this summer. Fermentation is an area I would like to explore further.

Season 3, I enjoyed the Korean monk’s zen cooking from her garden, Ivan Orkin searching for the best ramen (I found his grilled ramen recipe which I will definitely try to make the noodle) and I’m totally amazed by Virgilio Martinez’s bringing an eco system on the table in his restaurant in Lima with each plate, this is a restaurant I really would like to try.

I think the series are generally interesting, but I think it’s more a life story of a chef than a food programme. It gives a brief introduction of food of each country. I will now continue with Mind of a Chef…