Slid on into chef zhao’s in Mt View. Long referenced by at least one CH’er, I have been reading/cooking/eating through some of Fuschia Dunlop’s books, which caused me to want to revisit some Sichuan places.

Ate:
Twice cooked pork. BANGIN. Often the dish is too fatty ( for american tastes ), but this is fatty but sliced so thin. Heavily spiced. A little greasy but soooo good.
Sichuan Wontons. Best I’ve had in a while. Pungent spices, funny orange-citrus taste, more filling than some.
Lamb with black bean. Slightly less spiced but still the basic heavy sichuan favorite flavors. Interesting use of celery, which Ms Dunlop talks about frequently. Yum.
Sichuan potatoes. As a simple dish, this is closer to the dishes in every grain of rice, and I could see the brilliant simplicity.

Most of the chinese tables had hot pot or boiled beef or similar.

For the 2nd restaurant, are you referring to their sichuan hot pot place (Pop Pot) in San Mateo? Perhaps its just a case of spreading too thin.

Is that the place? I only heard it was in San Mateo, and someone here called Chef Zhao a “chain”.

Arguably the place was half-full on the late side of a thursday, probably everything’s fine. The place has always been a little dim inside with great food. Just a simple reminder - they’re still doing excellent food there - stick to the sichuan.

Any comments on the specials boards? 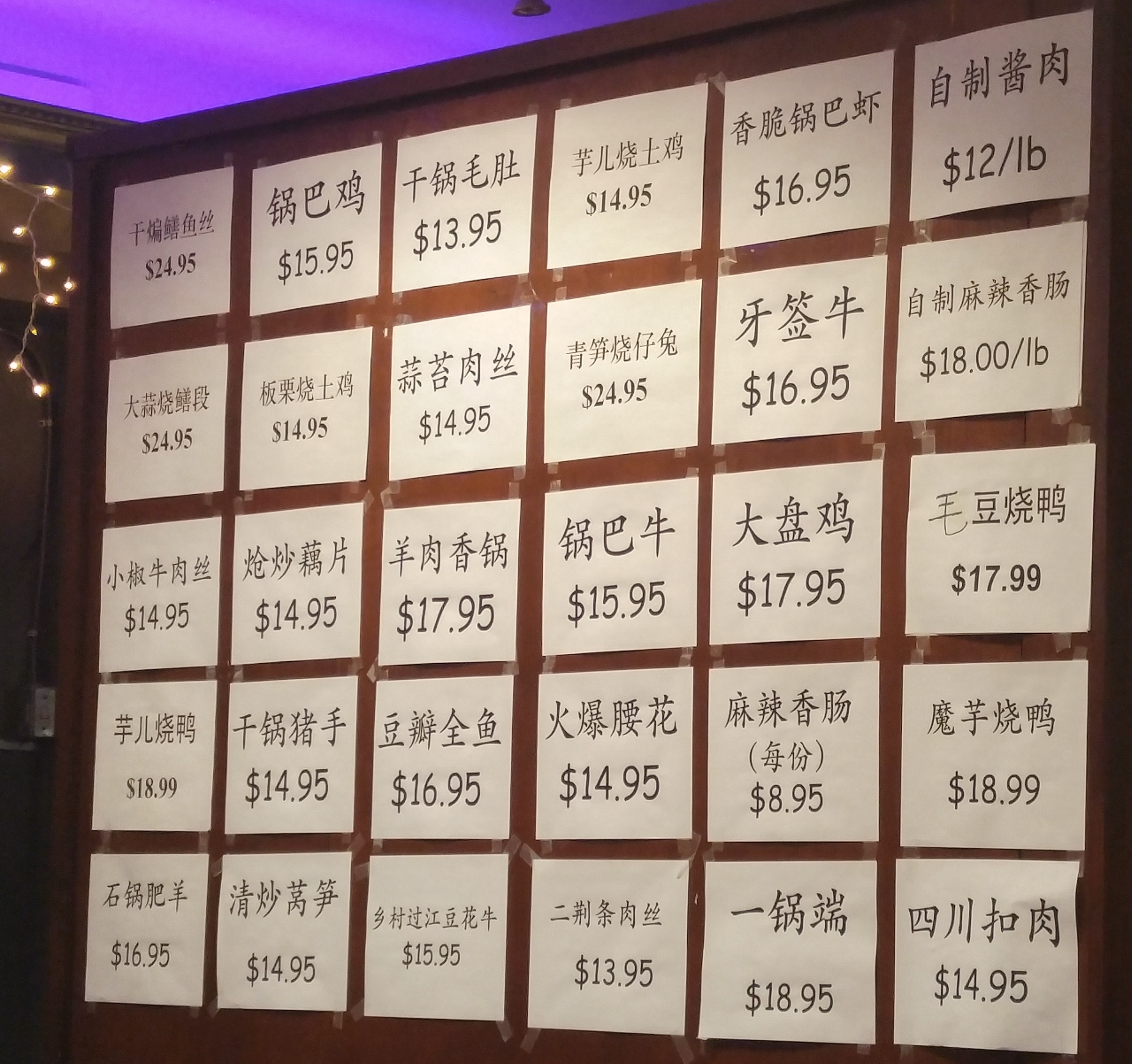 I just had some toothpick lamb in Berkeley, and didn’t realize anyone else in the Bay Area had it! : Chengdu Style (Berkeley)

There’s been a Chef Zhao Bistro in San Mateo for a few years.

It surprises me that Pop Pot is from the same people? Maybe I had a non-representative meal there (sesame pancake bland inside and not very sesame flavored on the outside; pao cai “Sichuan Kim chi” was cut into coarse chunks and pickling didn’t penetrate much； beef ribs were excellent, cut like Korean ribs, not greasy, and meat/soy flavored rather than mirin/sugar dominated as in Korean ribs). They’ve got a special on the back of the menu that looks like a Chinese paella with whole lobster, etc. for $400 or $500.

THAT STUFF IS NOT ON THE MENU. Housemade numbing hot sausage, sounds great.

At least, they’ve taken the “secret” out of the “secret chinese menu”.

It surprises me that Pop Pot is from the same people?

According to these links below, yes. The writer seemed to have copied and pasted the same paragraph about the chef in both pieces.

Good find, and abc confirms that an owner (named Zhao) owns both!

And the San Mateo chef Zhao:

Bottom three rows of the Jeopardy board, from left to right:

A post was split to a new topic: Chef Zhao (San Mateo)

Does anyone know why they closed chef Zhao in Mountain View? I always enjoyed the food at the Mountain View location over the San Mateo location :(.

I hate to just post to say “nope”, but I hadn’t been for a few years, due to closer places.