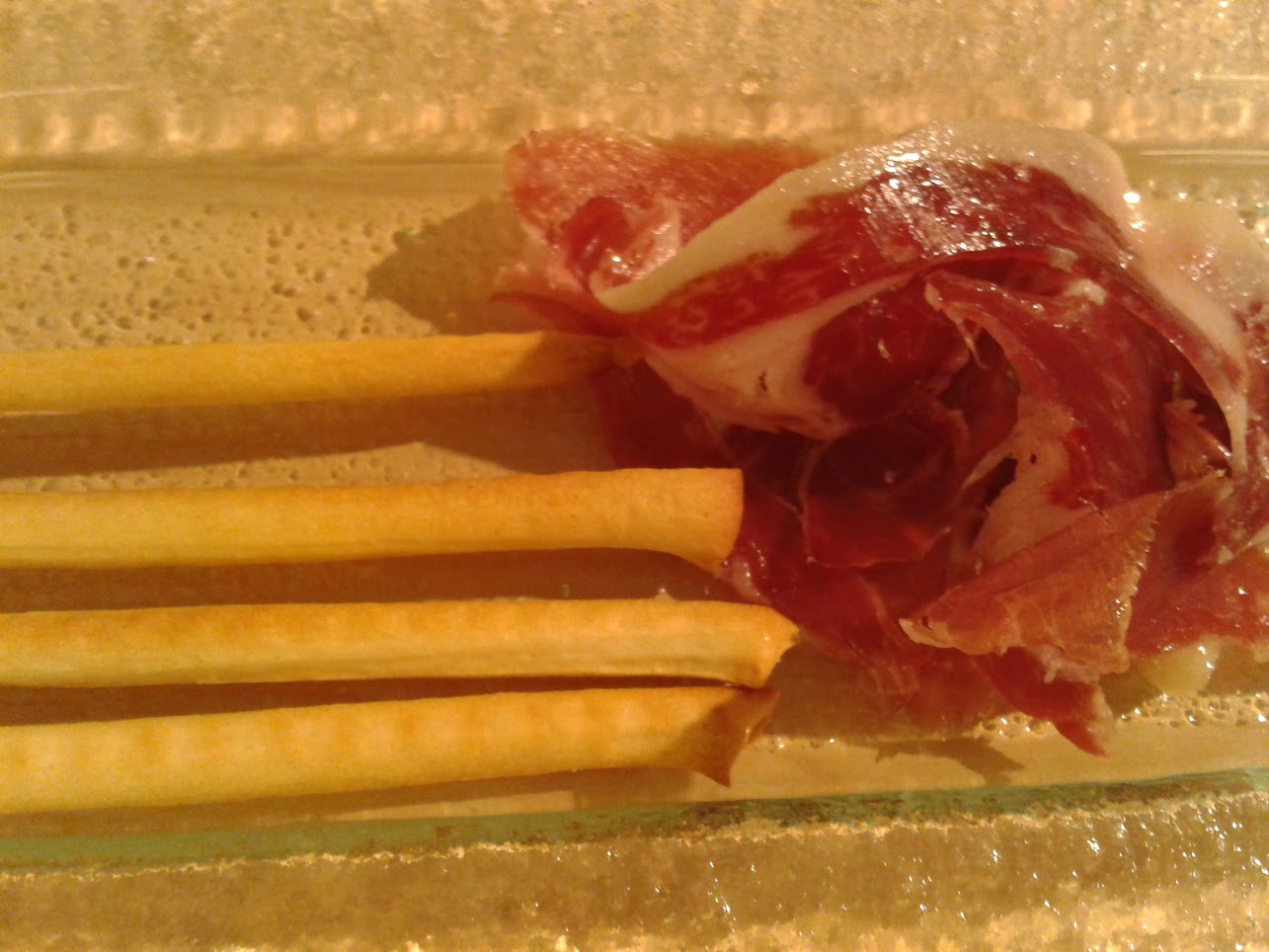 Which cheeses & hams do you buy to créate a special cheeseboard ? Do you have a certain number of cheeses for example ? Charcuterie ? How many ? What type of crackers or breads do you pair for these specialties ?

My norm for just the two of us is 3 or 4 cheeses; 1 aged sheep cheese, 1 fresh goat cheese, a blue and possibly Pecorino Sardo or Reggiano Parmigiani aged 3 years. There are 4 Iberian Ham designations in Spain (Jabugo, Dehuesa, Badajoz, Teruel, Salamanca) and another chacuterie we enjoy very much is Italian Salume.

If it is just the two of us, then we only ever serve ourselves one cheese.

Unless Mrs H has baked a loaf, we’d serve with a baguette and chutney (usually one I’ve made).

It is very rare that we eat a non-British cheese.

Usually three cheeses. My wife is in charge of that but there is usually a soft cheese such as a blue or Brie. Always prosciutto, usually a salami, sometimes a pepperoni. Apple. Fig in season. Water crackers and bread, either a baguette or sourdough. Chutney like Branston pickle.

At a slight tangent, I’m also a big fan of the traditional “ploughman’s lunch”. That’s a specific plate not simply a lunch a ploughman might have. And, when I say “traditional”, it dates all the way back to the 1950/60s. It was marketed by the Cheese Board and, later, by the Milk Marketing Board from the late 1950s as a way to promote the eating of cheese after it had stopped being rationed in World war 2. Rationing finally ended in 1954 but cheese production took some while to recover.

It probably can’t be bettered (when done well) as a lunch sat outside a pub, in the sunshine, enjoying beer and food.

At it’s most straightforward, there’s cheese (usually a Cheddar), bread, butter, pickled onion, apple, pickle (Branston or similar). You’ll see more fancy versions but these are no longer a ploughmans.

By the by, I think the most enjoyable plate of cheese I can recall was at the restaurant of the Hotel de la Basilique in the small northern French town of Albert., where it comes as the third of four courses. They have a small cheese trolley, all local cheese. You make your selection and they take the plate away, returning it with bread and a handful of salad leaves in a very mustardy dressing.

I was eating “quasi vegetarian” during one year of extensive visits to Britain. Ploughman’s lunch was my standby pup order. Always reliable.

“Cheeseboards” take as many forms as the occasions at which they are served. In the US, one might be a casual lunch or with drinks before dinner. We, personally, never serve cheese before company dinner as we usually include a cheese course after the main and before dessert. In NorCal we have a large choice of local small producers. I personally love Humboldt Fog (soft goat), Red Hawk (washed rind cow) and Cowpricious (a haunting parmesan-like cow). We serve with Bing cherry compote or spiced figs or grapes.

A question has been mouldering in the last few years about wine with cheese. Traditionally the main course red was finished off during the cheese course, which, I’ve been told, set the habit of opening a red for cheeses. More recently we and others have been sliding toward an off-dry white, like a viognier or Condrieu. And, of course, sweeter whites with blues and other pungents.

Traditionally the main course red was finished off during the cheese course,

Although not traditionally in the UK, where we serve cheese after dessert. I’ve always assumed that this took the place of the “savoury” which would have ended a formal Victorian dinner. Even way back in my drinking days, I never understood this - just seems wrong to go from savoury, to sweet, to savoury. So, in this house, we’ve always done cheese before dessert, in the French style. .

Norm is the French style …

As far as wine and cheese pairings go, we are veered toward whites, however, long time aged cheeses pair quite lovely with reds and we prefer blues paired with a semi sweet White for example Moscatel.

White wine also has the capacity to cut through the fat in goat and sheep cheeses or bloomy White rind cow variety cheeses. 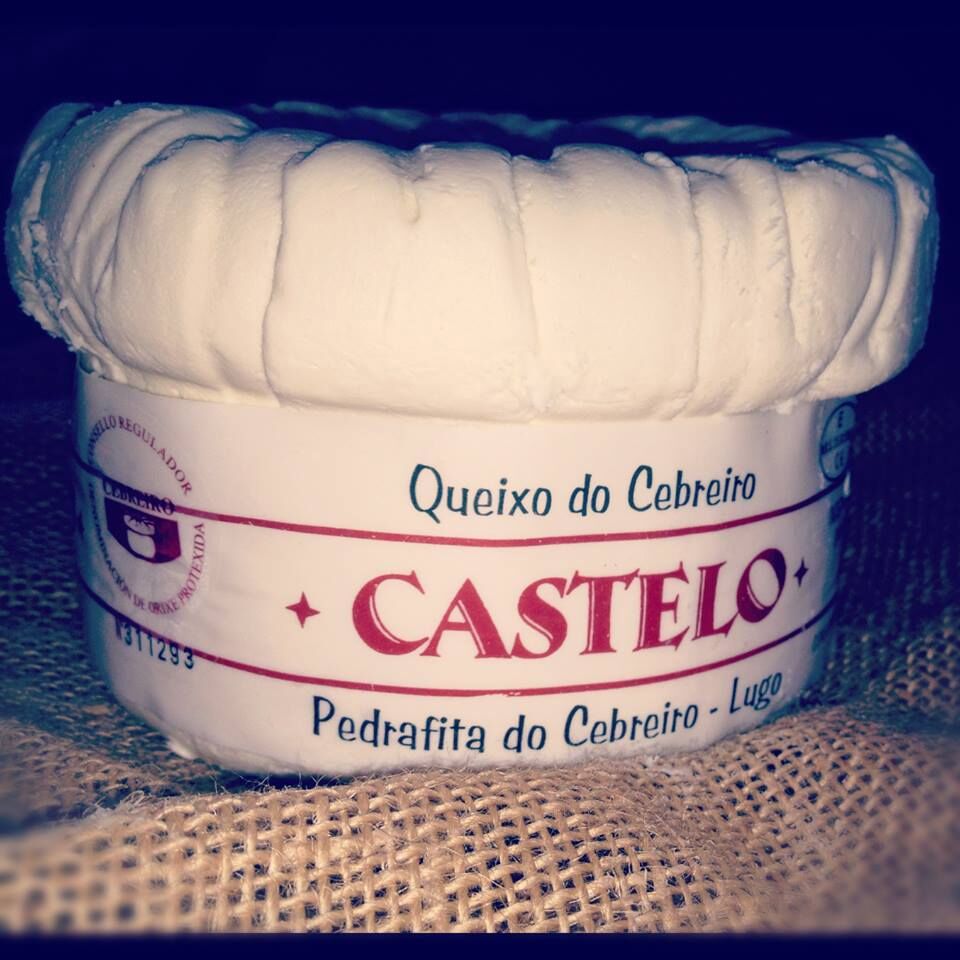 This Chef Hat delight is from Lugo, Galicia and it is a 60 % cow and 40% goat milk cheese with a designation of origin and its texture is not “creamy” … It has sort of a “rough” texture and is a fresh cheese that has a more goat cheese texture and taste than the cow texture …

This pairs wonderfully with sparkling White wines or Godello, the region´s indigenious grape variety or Albariño or Ribeiro whites.

Years ago his holiness Robert Parker himself wrote that a dry white wine is more suitable to cheese than a red. We still drink red with cheese.

Food and wine pairing are quite subjective and personalised.

We all have our individual preferences … 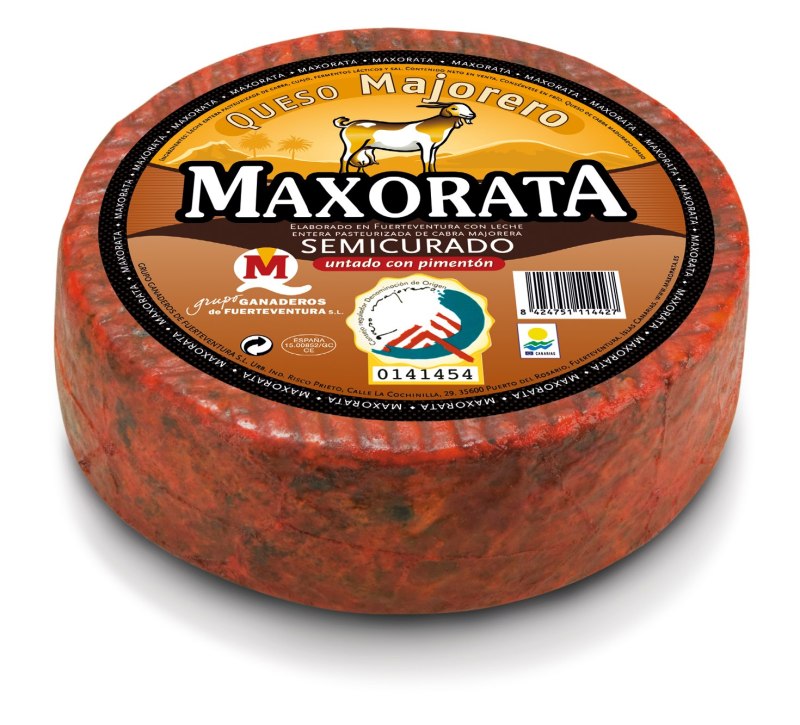 This a Majorero goat cheese, semi aged or semi cured … Quite a delight with Local Fuerteaventura, Canary whites or reds (subjective and personalised preferences) …

Also had the opportunity to sample the smoked aged which was quite amazing and had the aromas of a fireplace burning Wood. Very aromatic.

There are some pretty good goat cheese from the Canaries. We visit Tenerife every year, which doesnt seem to make much. However, the cheeses from la Gomera are readily available, either as curado or semicurado. Producers from the island are usually found attending farmers markets on Tenerife.

re the Castelo, Want. Perhaps even need.

It is quite wonderful !!

Spain in general has approx. 100 designations of official cheeses. Some are lesser known and are very local as the dairies are boutique size.

The Canaries ( 7 islands) have quite a few good goat cheeses from this indigenious goat breed, The Majorero …

This cheese is produced in the High Sierra of Fuerteaventura.

I believe that they also ship, so when you are in Tenerife or Gomera, you can check and see if they could ship it and / or where you can purchase it …

By the way, this cheese has a smoked paprika (pimentón) rind !!! A hint of heat !!

or where you can purchase it …

The supermarkets in Tenerife stock a range of goats cheeses from the islands. I’ve made a note of this particular product to see if I can get it when I’m next over there, early next year.

I like the way Canarian producers are saving local animal breeds from extinction by using them in ways like this. I was chatting with a restaurant owner last trip who told me that the Canarian black pig is now being used increasingly in restaurants where, until recently, it was likely to become extinct. He turned the meat into meatballs, coated in the local Gofio flour, to give it a slightly sweet, crisp exterior. One of the nicest meatballs I’ve ever eaten.

You have the absolute best hams in Spain. Only those and Tyrolean Speck will do for me. I eat a lot of cheese… there’s no food I like more. (See photos on the cheese thread) 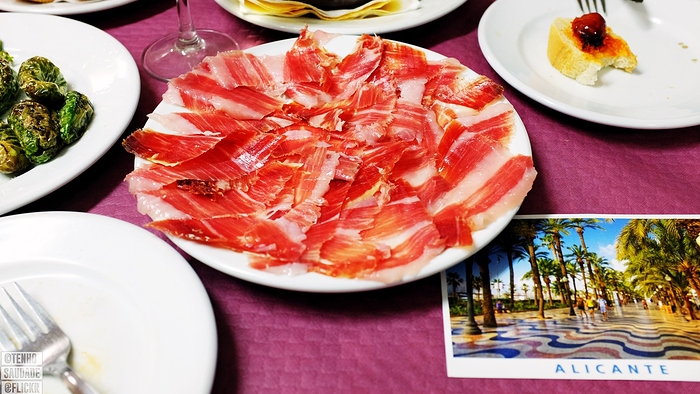 Different kinds of Tyrolean Speck. I like the belly and the cut called “Schinkenspeck”. In the photo below the cuts I like are second from top and the bottom one. 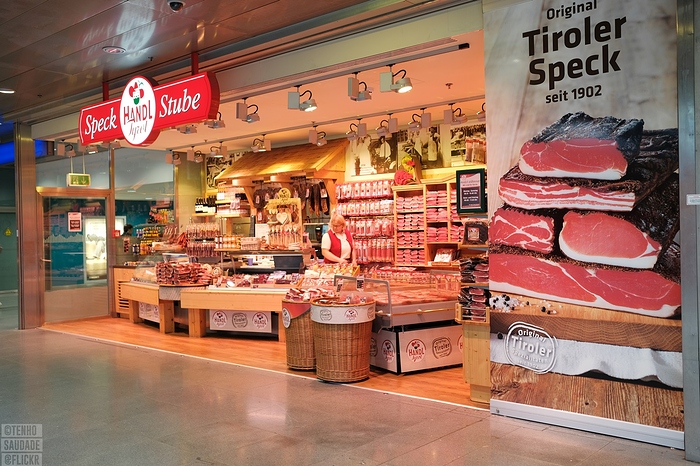 Thank you for your feedback.

Yes, they are quite involved with “re-establishing” a wide variety of agricultural products and especially grapes, and “fauna” indigenious to the 7 Canary Islands that were practically extinct or highly endangered.

Have a lovely week. 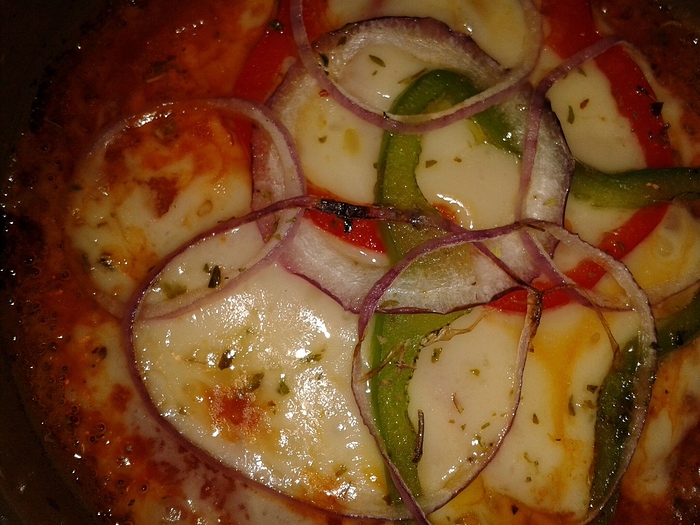 The invention of an Italian Provolone cheese maker who relocated to Argentina in the 1950s approx. created this marvel …

A round of provolone, herbs or spices to personal taste, tomato of choice, red onion or scallion, spring onion or Green and Red Capscium bell pepper slices … Ham or salume or chili pep too, as well if you wish.

Bake in earthenware (cazulea) or microwave if you wish, until provolone is melted … Serve with baguette of choice or “Chapata” style rustic breads. Grease the earthenware with a little Evoo.

Approx 5 minutes depending on the heat used.
Watch it and do not speak on mobile !

A pizza without the dough !