Let’s discuss some good burgers! I can talk burgers for ages! A local sitting duck one inspired me to write this.

I had this Friday and opted for their cheddar sauce instead of American. This was a nice treat. The bacon was fried up crispy and the cheese sauce is outstanding. Most places put two slices of bacon but the sitting duck throws down 5 slices. The burger came out rare and juicy to my wishes. It is well balanced and not a huge sloppy pile of meat. The meat blend is a tantalizing offering and it even comes with a cup of soup. Their manhattan chowder is decent.

Let’s here some other good Burger stories. Viking had a good experience recently at oyster point and I’m looking to try that.

Where is Sitting Duck?!?

CHEESEburger? To me that’s adulteration.

I share with you my perfect burger - Frankie’s, at the bar at lunch, in PPB. No nonsense, just a truly wonderful burger.

The Head High on draft was simply a wonderful bonus. 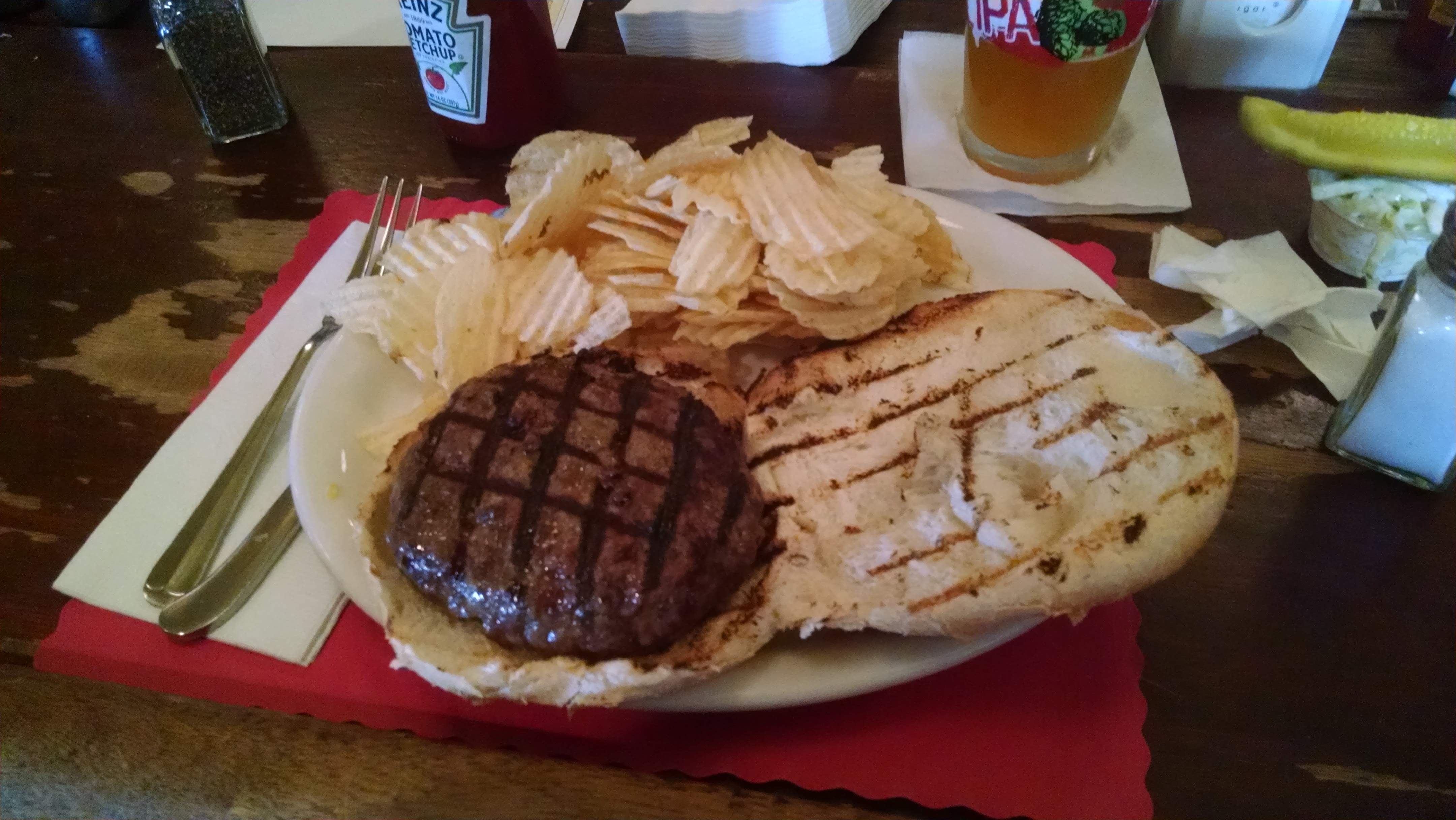 Long Branch - just off 36 by Monmouth Park. It’s part of the remains of the Grist Mill/Main Street/Sitting Duck/Pour House group of yore. One is dead; one is dying and the Sitting Duck and Pour House just keep on keeping on.

I thoroughly enjoyed my first Frankies burger just about a month ago. I opted for cheese however. Great NJ pub burger along the lines of Barnacles, Pour House, etc.

Currently my favorite burger is at B2 Bistro. Dry aged beef, nice soft bun, pickles. I think the only option here is the cheese, i.e. no bacon, onions, etc. Makes sense since the burger is so tasty.

Glad you enjoyed the Frankie’s experience.

I generally stay away from Red Bank. Being a Montclair ex-pat I’m sensitive to parking (and pretension). I do see that B2 seems to have its own lot which makes a big difference to me. Looks like I’ll have to do a lunch there soon.

As I have posted so often about burgers on the site that dare not speak it’s name I will have to clear any posting in this topic with Dr. No.

These are the top 5 burgers currently in NJ.

Coldbeer, you sir, have your burger game down. Let me know if you want a cold one at barnacles on me.

Not from NJ or living there . Would like to know of the burger sliders , a little grilled onion and some cheese , that’s it . Let’s hear it . I would love those .

Why would you invite someone out for a cold burger? That’s just rude CJ!

Some will say it’s blasphemy but white castle burgers are good every twice a year for me. I don’t know of any other sliders around that are good as I usually prefer larger pub style burgers. I’m sure someone will chime in. My issue with sliders at restaurants is they are way too meaty. I think it defeats the purpose of the slider. I like the thin white castle style burgers that are nice and moist.

Lol Jr, I like my beers cold and my burgers blazing off the grill. Barnacles gets the job done but man I still dream of the hookline and sinker burgers. They were amazing with the cheddar sauce and piles of crispy bacon and frizzled onion strings. Nothing has ever come close to being that epic in my burger world.

Back in the day we used to hit White Castle late night but I was too intoxicated to remember the experience other than a good cleaning out the next morning.

Oh man…they dont call them belly bombers for nothing!

I use to be able to eat a dozen+ white castles especially on a drunken night out. Probably about 10 years ago my digestive system decided it took offense to White Castles and now just one or two and it’s no Bueno.

On the rare occasions I want a burger I go to The Pour House, I like their sautéed onions and their cheddar stout cheese sauce.

Trust me…I know the feeling. They are good going down but you pay the price lol.

Have you seen that blended burger at the pour house? I 99% sure you know this but pour house and sitting duck are the same owners.

Yes I knew that, the Grist Mill was my personal favorite of their locations, haven’t cared for any of the occupants of the space since.

What a nice piece of land there. The grist mill was a cool spot. How old is that building?

It was orginally constructed in 1742 and was used as a farms feed barn, with the falls used as a watering hole used for the animals. The original owner was Samuel Tinton, he received the land through a grant from the Brittish Goverment for his participation as a provisions supplier for settlers in the area.

After the Revolutionary War the Tinton Family was allowed to keep the land granted they would continue to farm and act as a provisions supplier for the newly independent colonies in the area’s.

In 1853 they turned the feed barn into a mill which it was known for up until the Grist Mill Restaurant. Although it operated as a mill in the 1930’s the army core of engineers diverted partial water flow from the water supply for the falls, to supply the reservoir so the remaining water supply was no longer adaquate to turn the mill, the location was turned into a “Watering Hole” serving ale, then later food.

Once established as a restaraunt it has remained such till this day, with its illustrious history as I’ve described above being cemented on August 13, 2016, when I just made this story up.

How the hell do you expect me to know how old the building is!?!?!??