Che Fico Alimentari (from Google alimentari means “food” or “groceries” in Italian) is a newish restaurant by the owners of Che Fico, which is located in the same building on the second floor. It takes the place of Theorita (reviewed here: Theorita, SF Nopa review w/ PICS) which was a sandwich and pie place also from the same owners. Che Fico Alimentari’s focus is on salumi, cheese, and more traditional Roman dishes than the Cal-Italian/Roman Jewish inspired dishes served upstairs. Dried pasta rather than the mostly fresh pastas served upstairs as well. They also sell groceries such as the dry pasta and salumi to take home.

I walked in on a late Saturday night. They close an hour earlier (11pm) than the main restaurant on Saturdays.

Carpaccio di Vitello ($16)
bagna cauda, parmigiano reggiano
Veal carpaccio. A nice carpaccio. Very strong flavors with the salty bagna cauda sauce and a good hit of acidity from I think lemon juice. The veal itself was quite mild tasting as veal can be. 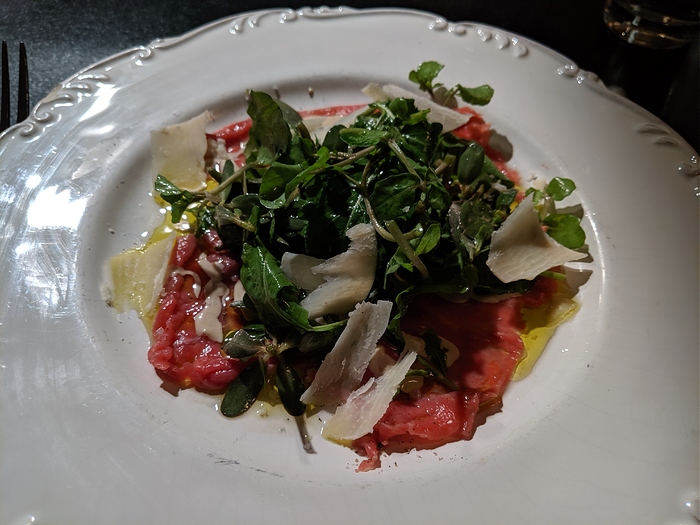 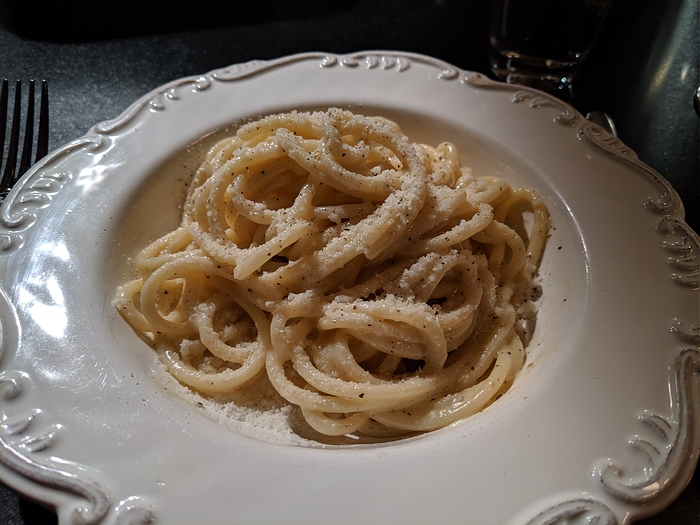 Melanzana alla Parmigiana ($19)
eggplant, mozzarella, marinara
Eggplant parmigiana. From the picture it looks a little burnt on the edges but it was just browned. This was quite good as well. The layers of eggplant slices were cooked well inside but were breaded with some bread crumbs, giving it a good mix of crunchy and tender. Nice tomato sauce that was just the right amount of salty. 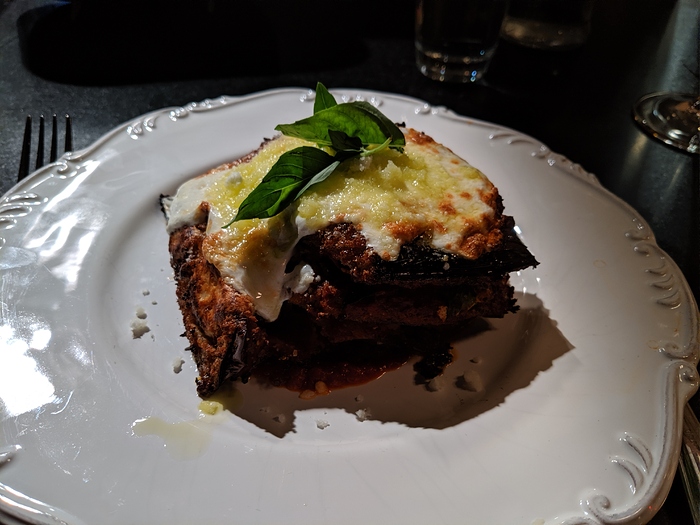 Gelato ($5)
Hazelnut gelato that came with a little cookie. 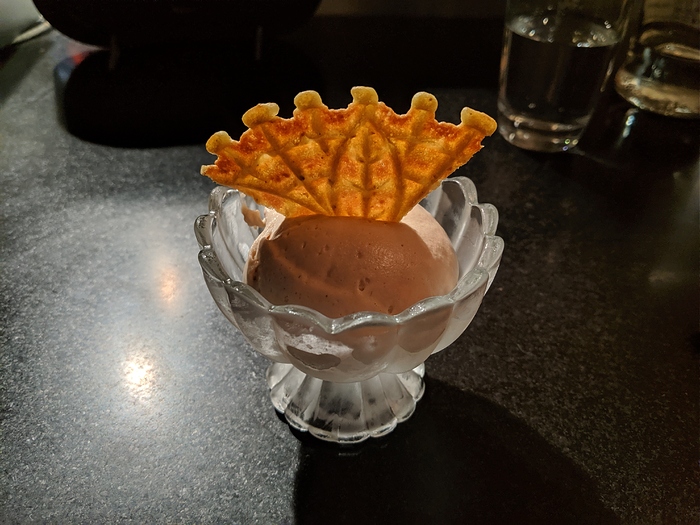 Dishes are more traditional and not as novel perhaps as the ones upstairs, but were very well executed. 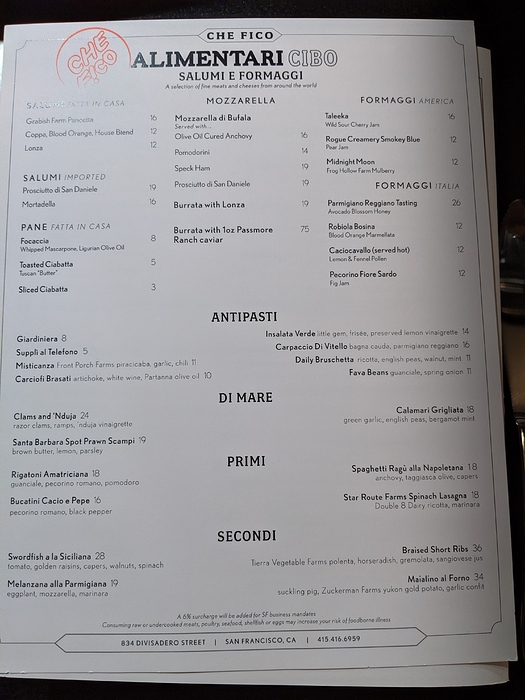 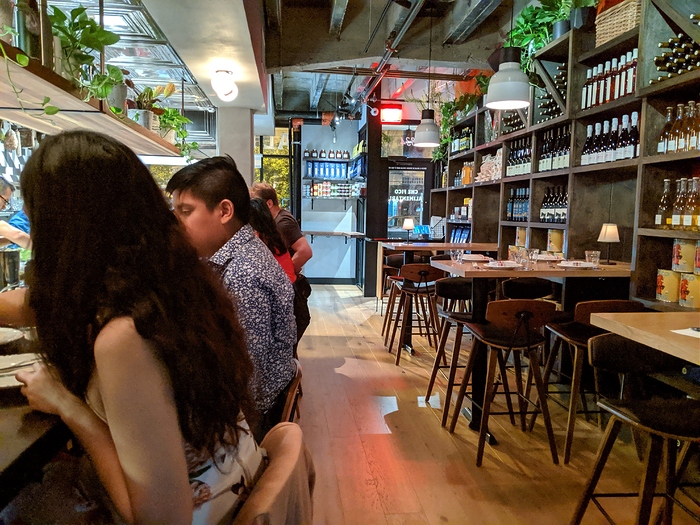 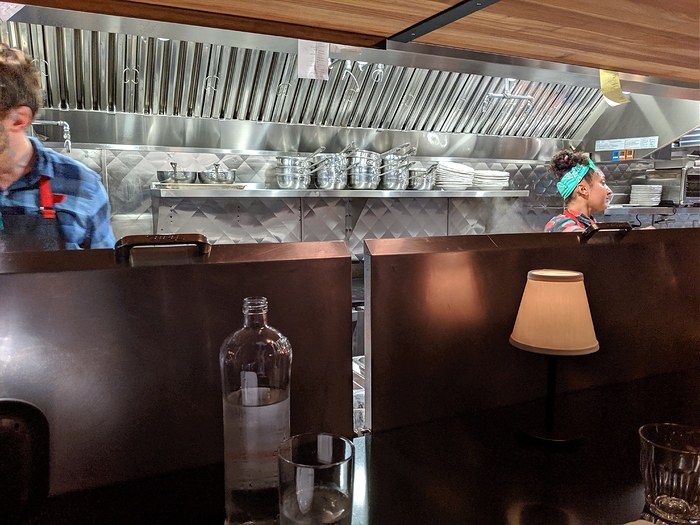 Thanks for this. What was the noise level? I loved the food and service upstairs but the noise was literally deafening. Would love a place to eat that food.

IIRC I found it moderately loud mostly because there was one table that was quite loquacious. Not as loud as upstairs but not a great comparison as the Alimentari was only half full at the time.

we ate there too, and had some of the same dishes you had. we also enjoyed the arracini and the artichoke hearts. the noise was not too bad, especially compared to most other SF restaurants.